How much does homeowners insurance cost?

The average annual homeowners insurance premium is around $1,200, but costs vary widely from state to state and house to house.

Selecting a homeowners insurance policy is one of the more important purchasing decisions you’ll make after finding a new home. Homeowners insurance protects your assets — the home itself, personal property within the home, and legal and medical bills if someone is injured on your property. It's also required by most mortgage companies before they’ll lend to you.

According to the National Association of Insurance Commissioners, the average annual homeowners insurance premium is $1,192. Homeowners insurance costs differ from state to state for a number of reasons. If a state has a lot of major cities and more densely populated areas, it’s more likely to have higher premiums, as home values are generally higher. States in areas with a higher incidence of natural disasters also generally have higher premiums than states that don’t match that criteria. Homeowners insurance premiums are also dependent on the age and rebuild value of your home and the insured limits in your policy. 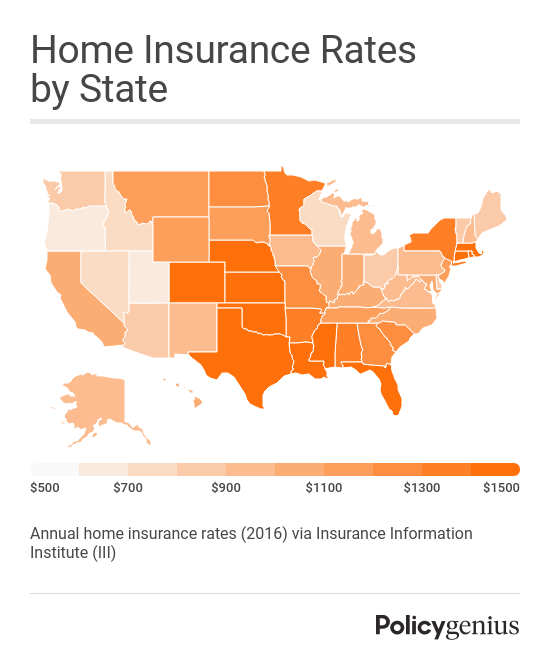 The most expensive states for homeowners insurance 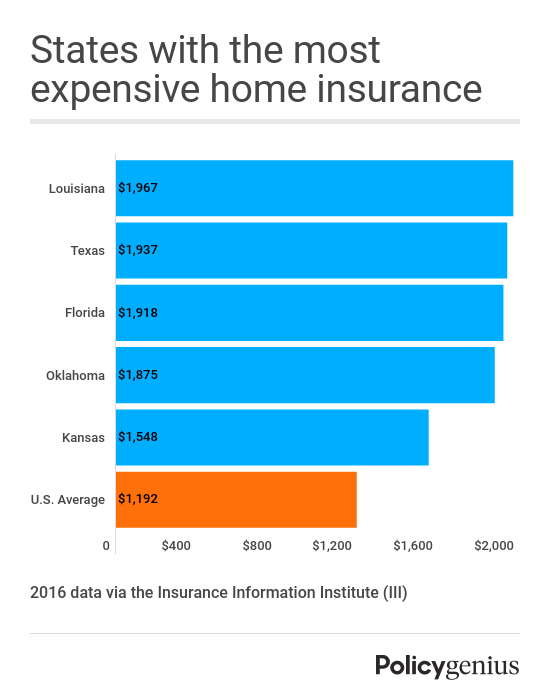 Extreme weather is a common theme in states with high homeowners insurance premiums. Louisiana, Texas, and Florida are coastal states and are more susceptible to strong storms, and Oklahoma and Kansas are right in the middle of Tornado Alley.

The cheapest states for homeowners insurance 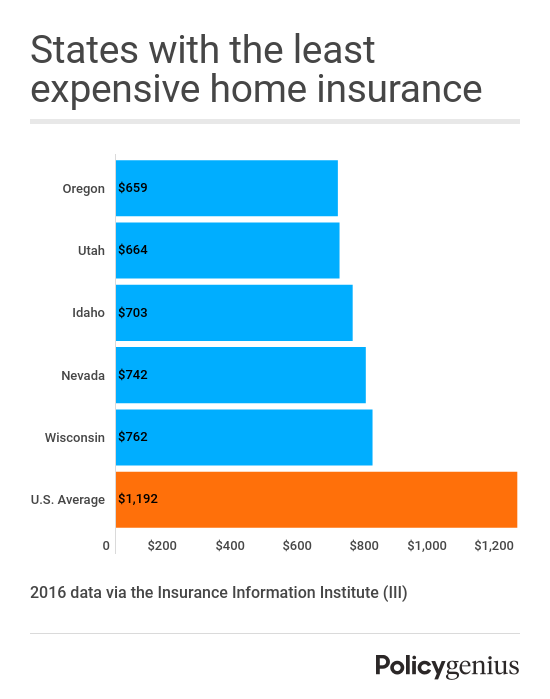 On the flip side, you can get a bargain deal on homeowners insurance if you live in a state that experiences milder weather.

While we don’t advise moving somewhere strictly based on how high homeowners insurance premiums run, it’s helpful to understand why policies are cheaper in certain states and more expensive in others. As you can see, the following states aren’t likely to experience tropical storms and aren’t as prone to catastrophic tornadoes or other disasters.

Some insurance companies simply charge less for homeowners insurance than other companies. If you insure your home with a company intended for high-value homes owned by high-net-worth homeowners — like AIG or Chubb — you’ll pay more for coverage simply because the insurance products and customer service are more comprehensive and personalized than with a standard carrier like Travelers or Stillwater.

Certain insurance companies also have a different risk tolerance than others, and that can mean lower rates. For example, if they don’t insure homes with prior claims or homes at high risk of being damaged by a natural disaster, rates might be lower across the board.

Read home insurance reviews, get quotes, and buy - all in one place.

Below is the average annual premium for homeowners insurance by insured value range.

What determines the cost of homeowners insurance?

Homeowners insurance companies factor in different kinds of potential risks when determining home insurance rates. Some of these risks you have control over, and some are simply beyond your control.

How much of each homeowners insurance component do you need?

How to save on homeowners insurance

Along with insurance bundles, loyalty discounts, and infrequent claims, you can also lower your homeowners insurance premiums by increasing the number of safety and security features in your residence:

Interested in reshopping into lower homeowners insurance rates? Look no further than Policygenius. We’ll look at your policy, compare your coverage and cost with other insurers, and help you determine if you can get a better deal with another company.

How much is homeowners insurance on average?

The average cost of homeowners insurance is around $1,200 a year, but many factors play a role, including the details of your property and which state and city you live in. Louisiana has the most expensive home insurance, at an average of over $1,900 a year, and Oregon has the cheapest average home insurance at around $650 a year.

How do I estimate the replacement cost of my home?

The replacement cost of a home can vary from company to company. Factors like your house's square footage, local construction costs, your roof, and even the style of the house can come into play. A licensed expert can help you make sure you get adequate replacement cost coverage.

What is covered by homeowners insurance?

Home insurance covers your home and personal property, along with providing liability protection and covering loss-of-use costs if your home is damaged and you need to stay in a hotel. Exact coverage will depend on your policy; fire, hail, theft, and burst pipes are typically covered, but earthquakes and flooding are not and require separate policies at an additional cost. Note that your coverage will only kick in after you meet your deductible, and a lower deductible will mean higher premiums. Check your policy and talk to an expert to find out exactly what coverage you have and need.

Pat Howard is an Insurance Editor at Policygenius in New York City and an expert in homeowners insurance. Previously, he was working as a freelance writer for the New York State Nurses Association and wrote for the Michigan Information Research Service. Pat has a B.A. in journalism from Michigan State University.