At Policygenius, we're committed to providing objective and transparent advice through strict editorial standards to help you get insurance right. Read more about our methodology.

Get quotes in 60 seconds

Hippo burst onto the scene in 2015 and immediately established a name for itself. Featuring impressive digital tools and modernized coverages, Hippo is partly responsible for the innovative, tech-focused shift sweeping across the property and casualty insurance industry. Although they're relatively new, Hippo is in a good position financially. Policies are underwritten by insurance giants TOPA and Spinnaker (combined $200 billion in assets) and Swiss Re, the second largest reinsurer in the world. In short, your home will be safe with Hippo.

A nonprofit organization focusing on marketplace trust and product quality

Your home is arguably your most valuable financial asset, so it's important that you insure it with a company that will fulfill its end of the bargain in the event of a claim. With Hippo, you'll protect your home with outstanding coverage at a bargain rate. Even the most basic Hippo policy includes coverage and features normally reserved for higher tier products with other companies. However, you can't file claims online, which seems odd considering you can do just about everything else online with Hippo. Hippo is also new and lacks reputation in the insurance industry, which some may consider a drawback.

Get quotes in 60 seconds. With Hippo, gone are the days of pages and pages of answering detailed questions about your home that you don't know the answer to. All you do is type in your address, and Hippo provides you a quote in a minute.

Multiple robust, modernized policy options. Hippo offers three high-quality policy tiers you can choose from based on how much coverage you need for your home. And the best part is they're all inexpensive. In fact, Hippo rates are lower than the average provided quote with Policygenius.

No online claims filing. You can't file insurance claims through Hippo’s website. Instead, you need to call in your claims. Although Hippo provides a "concierge line" to take your claims, the lack of an online way to start the claims process feels out of whack with the rest of Hippo’s online offerings.

Lack of industry reputation. Founded in 2015, Hippo is a young company that lacks recognition from some financial rating firms and customer sentiment sites. For some customers, this can understandably be worrisome. If you’re insuring expensive assets or live in a high-risk area, we encourage you to do more research before considering a policy with Hippo.

With Hippo, you can expect to pay around $1,499 annually for coverage, according to an analysis of quotes submitted with Policygenius. That makes Hippo home insurance rates lower than the average quoted policy with Policygenius.

Average annual rates are based on a single-family home with around $300,000 in coverage. But the cost of your own policy with Hippo will depend on your location, any risks associated with your home, and the amount of coverage in your policy.

To keep your homeowners insurance costs down, you should take advantage of discount opportunities.

Hippo provides discounts for making your home safer, not filing claims, and new homebuyers. Hippo also offers discounts for belonging to a homeowners association (HOA) and for getting your policy more than a week before it goes active.

Homeowners insurance protects your most important financial assets, so you’ll want to make sure you're insuring your home, personal belongings, and assets with a company that can pay out your claim in the event of a disaster.

Hippo hasn't been around long, so there are no ratings with credit ratings agencies S&P and Moody's. But Hippo is backed by three distinguished and financially lucrative insurance companies in Spinnaker, TOPA, and Swiss Re. With Hippo, you can insure your home with confidence.

A.M. Best is the most reliable credit-rating tool policyholders can use to gauge the financial health of an insurance company. A good score with A.M. Best means a company is more likely to fulfill their financial obligations when it’s time to file a claim. With a score of A-, Hippo has an “excellent” rating.

Both Moody's and Standard & Poor's (S&P) measure companies' creditworthiness and the long-term financial stability of insurance carriers. A “AAA” rating is the highest issuer credit rating assigned by S&P. Neither firm has rated Hippo, but they do have scores for Swiss Re, one of the companies that financially backs Hippo policies. Swiss Re has an AA- rating with S&P, one of the highest a company can receive. Swiss Re also has a Aa3 rating with Moody's, the fourth highest rating a company can receive.

While it's important to know what experts think about homeowners insurance companies, it's equally good to find out what actual customers are saying.

Hippo has excellent ratings with consumer sentiment sites Consumer Advocate and the Better Business Bureau. However, since Hippo is such a new company, it doesn't yet have ratings with J.D. Power or Consumer Affairs.

J.D. Power rates insurance companies based on policy offerings, price, clarity of billing, and policy information. They have not included Hippo in their recent surveys, so there’s no score from them yet.

The Better Business Bureau ranks companies across a swath of criteria, including how they handle customer disputes. While consumers can submit ratings to the BBB, these scores are not taken into account in their rating. They give Hippo a solid A+.

Consumer Affairs lets customers directly rate carriers, while Consumers Advocate rates companies based on stability, reputation, and policy coverage. The former didn’t rate Hippo yet while the latter gives them a score of 4.8 out of 5.

The National Association of Insurance Commissioners tracks the number of complaints people submit to state insurance departments. A score of 1 is the baseline average, and a score of zero means there weren't enough complaints to count. The score of zero, based on financial backer Swiss Re, means they received less complaints than the average company.

Here's some of the highlights of each of the three coverage tiers with Hippo:

Note: The information above represents potential policy options and may not be available for every applicant. Speak to a licensed expert for a personalized look at your coverage options.

Hippo has an impressive website with an outstanding quote tool, educational articles, and an online chat feature, but Hippo lacks a digital claims process.

Homeowners insurance with Hippo is available in 32 states and continues to grow. 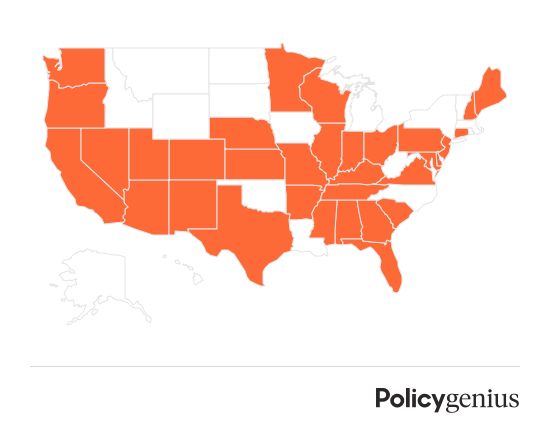 Hippo promises you a quote in under 60 seconds — and they’re not kidding. All you need to do is type in your address and Hippo almost immediately shoots back information about your home’s specs, including:

You're then given three quotes to choose from with varying levels of coverage.

One of the few things you can't do online with Hippo is file a claim for losses.To file a claim with Hippo, you need to pick up the phone and dial their claims department or email them. From there, you're assigned a claims advocate who manages your claim from beginning to end.

Though it’s disappointing there’s no way to file a claim online, you can still track your claim on Hippo’s website once it’s been submitted. However, you will be provided with the direct phone number of your personal claims manager whom you can call at anytime.

Policygenius offers insurance policies from many of the nation's top insurers, who pay us a commission for our services. However, all editorial choices are made independently.