The most popular estate planning documents

Why do people create an estate plan?

Why don’t more people have a will or estate plan?

Demographic breakdown of people who have a will

COVID-19 has people contemplating their mortality — nearly 40% of people feel an increased urgency to get a will because of the pandemic, according to Policygenius’s first annual estate planning survey.

For more than one in four respondents that means creating a will within the next year, but nearly as many people don’t have a time frame in mind for when they plan to get one.

This adds to the general findings of the survey, which reveals that the majority of people haven’t established a solid estate plan and have misconceptions about what happens to their estates after they die. 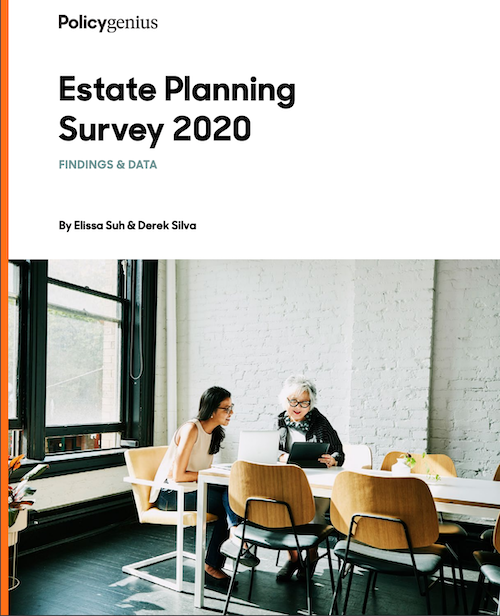 The most popular estate planning documents

A will is the basic foundation of an estate plan, yet more than 60% of Americans don’t have one.

Even fewer people have created a living will or established power of attorney. The least popular estate planning document was a letter of instruction, a more informal document that lays out personal sentiments, and nearly one in four people don’t have any documents in place at all.

Without these documents, there may be confusion and uncertainty regarding your financial and medical affairs if you die or become incapacitated. It can be difficult for your loved ones to navigate these situations if they aren’t privy to your preferences or wishes, which these estate planning documents would make clear.

Further details reveal that 6.0% of people have a trust, but not a will. While a trust is a flexible way to pass down your assets, it’s still a good idea to write a will.)

There was one estate planning document that respondents favored above others. Nearly half (49.7%) of Americans said they had a life insurance policy. Life insurance can provide financial protection for loved ones after you die, but only a will contains instructions as to who should get your assets and belongings. (Learn more about how life insurance works with wills and trusts.)

Why do people create an estate plan?

The top reasons for creating an estate plan are:

Overwhelmingly, respondents want to provide for their family financially. But they also want their estate plan to support their loved ones in other ways — nearly two-thirds of respondents want to make the process of inheritance as easy as possible, and more than one in three want someone to look after their kids. Nominating a guardian for your children in your will can make sure they’re being raised by someone you trust.

Keeping details of money and property private was another reason people cited for creating an estate plan. For that you need a trust, since wills eventually enter into the public record, but less than 19% of people who said privacy was important have established a trust.

Policygenius makes it easy to create a will and living trust.

Why don’t more people have a will or estate plan?

There are many reasons why people choose not to create a will. However, misconceptions about estate planning are the primary reason why people don't have yet have a will.

They don’t have anything valuable to pass on

The most common reason Americans don’t have an estate plan is a perceived lack of valuable assets.

A will is still an important estate planning tool, even if you don’t own anything particularly valuable — a will can pass on sentimental belongings and personal property and can name a guardian for minor children. Moreover, many people who say they have nothing valuable to pass down actually predict they’ll leave behind sizable estates.

They think their spouse will get everything

A fair number of respondents also believe that everything will go to their spouse, which is only partially true. This was the top reason cited for not getting a will by male respondents (28.6% of men chose this answer compared to 16.6% of women).

Men may be more confident in their ability to cover their finances, according to Hanna Horvath, personal finance expert at Policygenius. Since men are traditionally the provider in their families and typically die earlier, they are more likely to have a financial goal of leaving money to their spouse.

If you die without a will, you will have died intestate, and the state will determine who receives your intestate estate — depending on your state and who survives you, a portion of your assets may actually be set aside specifically for your children, including children from someone other than your surviving spouse. Some of your assets may need to be sold off to pay creditors or lienholders.

Additionally, all of the assets that don’t pass directly to a named beneficiary, such as those that are distributed through a payable-on-death designation or a transfer-on-death deed, or those that you jointly owned with someone else, may not automatically go to your spouse.

For example, if you have a bank account held only in your name, it won’t go to your spouse if you made the account payable on death to another beneficiary and that beneficiary is still alive and able to receive the account when you die.

(Find out how much a surviving spouse would receive based on your state probate law.)

Just over a fifth of people didn’t know where to get a will, but this differed greatly when broken down by the respondent’s age.

More young people (almost 30%) didn’t know where to get a will, perhaps because they haven’t started planning for the future. According to our respondents, having children is the most important life event that would trigger getting a will so it’s possible that many of these younger respondents haven’t yet reached this life stage.

Of the people who said getting a will was too expensive, more than one-fifth of them overestimate the cost. An estate planning lawyer can charge anywhere from $100 to $1,000 for a will — potentially unaffordable for many respondents who don’t know about more cost-efficient options, like creating a will online, which may cost between $0 to $399.

You can create a will with Policygenius using attorney-approved tools for $120.

An overwhelming majority of people don't know what happens to their estate when they die. Respondents who had a will were only slightly more knowledgeable than respondents who didn’t have a will.

What do you think happens if you die without an estate plan? (Select all that apply.)

A court determines who gets your belongings during probate. Without a will, the court will rely on your state’s laws of intestacy, and this could inadvertently leave loved ones without an inheritance.

Not all next-of-kin have an equal claim to the estate, as almost 19% of respondents believe; typically, the closer blood relatives, like lineal descendants (children and grandchildren) have a greater claim to your assets when you die without an estate plan. Nearly half believe that a spouse would automatically get their belongings. As mentioned before, a spouse may not always be entitled to receive all of the deceased’s assets.

Certain assets with named beneficiaries, called transferable- or payable-on-death accounts, can transfer directly outside of court, but most people weren’t aware of such assets.

Overall, very few people really understand what happens to their estates after they die — a mere 3.4% of respondents chose both correct options.

Learn more about what happens when you die without a will.

Confusion about the estate tax

Over a quarter (26.1%) of respondents stated that the main objective of their estate plan was to avoid the estate tax. However, further analysis reveals that very few of these respondents would actually be required to pay it.

A federal estate tax is levied only on estates worth over $11.58 million in 2020 (increasing to $11.7 next year), and while a handful of states levy their own estate tax, the lowest exemption limit is $1 million.

The vast majority of Americans are worried about the tax without reason: 81.0% of respondents concerned about paying estate tax expect to die with an estate worth less than $1 million, which means their estate won’t be responsible for paying it.

Here’s a breakdown of the estimated values of respondents who said they wanted to avoid estate tax:

Demographic breakdown of people who have a will

Here is a breakdown of different demographics and the percentage of people within that group that have a will.

People with a will by age

People are more likely to get a will as they get older.

People who have a will by marital status

Married people are more likely to have a will.

People who have a will by number of children

People who don’t have any children are less likely to have a will, but their likelihood of having a will does not necessarily increase with the number of children they have.

People with wills by annual income

Higher income earners are more likely to have a will.

And this holds true for other types of estate planning documents. However, the most common type of financial protection for any income level is life insurance.

Except for a trust, the other types of estate planning documents do not provide a way to distribute your estate to your loved ones after you die. For example, a health care power of attorney and living will handle medical decisions that need to be made while you’re incapacitated, although they do so in different ways.

Policygenius is the online insurance marketplace combining cutting-edge technology with the expertise of real licensed agents to help people get the coverage they need to protect their family, property, and finances with confidence. Since 2014 we’ve helped over 30 million people shop for insurance and placed $120 billion in coverage from our headquarters in New York City and Durham, North Carolina.

Ready to shop for life insurance?

Elissa Suh is a disability insurance expert and a former senior editor at Policygenius, where she also covered wills, trusts, and advance planning. Her work has appeared in MarketWatch, CNBC, PBS, Inverse, The Philadelphia Inquirer, and more.