Up-to-date facts and figures about car insurance in the U.S.

Car insurance by the numbers

26.7% • The percentage of drivers without car insurance in Florida, the state with the highest percentage of uninsured drivers in 2015‡

4.5% • The percentage of drivers without car insurance in Maine, The state with the lowest number of uninsured drivers in 2015‡

Average cost of insurance by type of car

Average cost of insurance by state 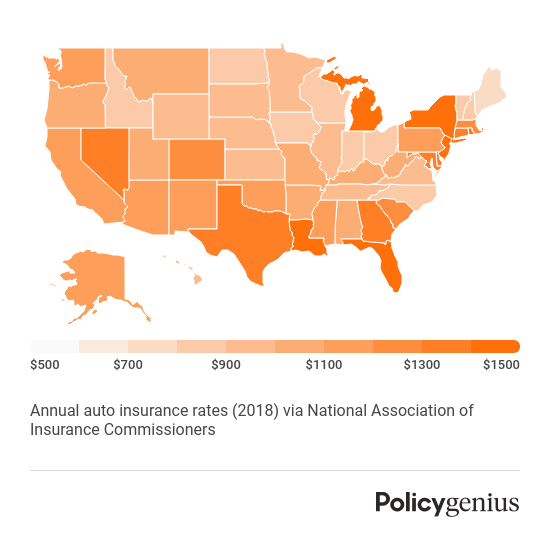 Different types of car insurance coverage also contribute differently to your monthly costs. Liability insurance, the backbone of most policies, is required in almost every state. Other types of coverage that protect your vehicle, like comprehensive and collision, aren’t required by law but are part of what’s often referred to as full coverage insurance.

The NAIC broke down the average annual premium for different types of car insurance coverage in 2018, the most recent year for which data is available.

Anna Swartz is a Managing Editor at Policygenius, where she has been since 2018. An expert in home, auto and renters insurance, she loves making tough concepts easy to understand and helping readers feel confident about their insurance options. Before joining Policygenius, she was a senior staff writer at Mic. Her work has appeared in The Dodo, AOL, HuffPost, Salon and Heeb.

Stephanie Nieves is an insurance editor at Policygenius in New York City, specializing in home and auto insurance. She’s been writing about insurance, business and financial planning since 2018, and loves helping readers get the knowledge they need to make financial decisions with confidence. In 2011, she earned a writing scholarship granted by Con Edison and The National Arts Club, and in 2015, she went on to earn the Sills Family Endowed Fellowship issued by her alma mater. You can read more of her writing on Business Insider, PayScale, Fairygodboss, and The Muse.