What does per stirpes mean?

Per stirpes is a method of distributing a deceased beneficiary's inheritance by dividing it into shares for their direct descendants (like a surviving child). In some states, the concept of per stirpes may more commonly be known as “right of representation.”

Per stirpes is used in different areas of estate planning, including wills and trusts, a retirement account beneficiary designations, and life insurance. If you write a last will and testament as part of your estate plan, you can include a per stirpes or per capita clause in it ensure that multiple branches of your family get a share of your assets if the beneficiary dies before.

Per capita is another way to describe how the inherited assets of a deceased beneficiary should be distributed, which tends to result in the remaining shares being distributed more equally among surviving descendants. However, there are variations and this may not always be the case.

These closely related but different terms can both cause legal confusion so it may be better to either name a contingent beneficiary to receive an asset or update your will if your beneficiary has died. You should speak with an estate planning attorney if you’re worried about the proper beneficiaries inheriting things. In the event that you die without a will, per stirpes or per capita will also factor in.

With per stirpes, which means "by branch" or "by root" in Latin, a deceased beneficiary's share of an inheritance gets passed along to their next-of-kin. This is usually the deceased heir’s children. Surviving spouses do not inherit via per stirpes. Stepchildren can inherit under per stirpes only if they have been legally adopted; an adopted child inherits the same as a natural born child.

If you die intestate (without a will) then your surviving descendants will inherit according to your state laws of intestate succession and how they define per stirpes.

Learn more about testate vs intestate.

Per stirpes is a confusing concept that can be made clearer through an example. Let's say you have three children and five grandchildren. Your oldest child has two children, the second child has three, and the third child has one.

If you die, and the oldest child has predeceased you, your assets or estate would be divided accordingly among surviving heirs:

If you die and your first and second child have predeceased you, the assets would be divided accordingly: 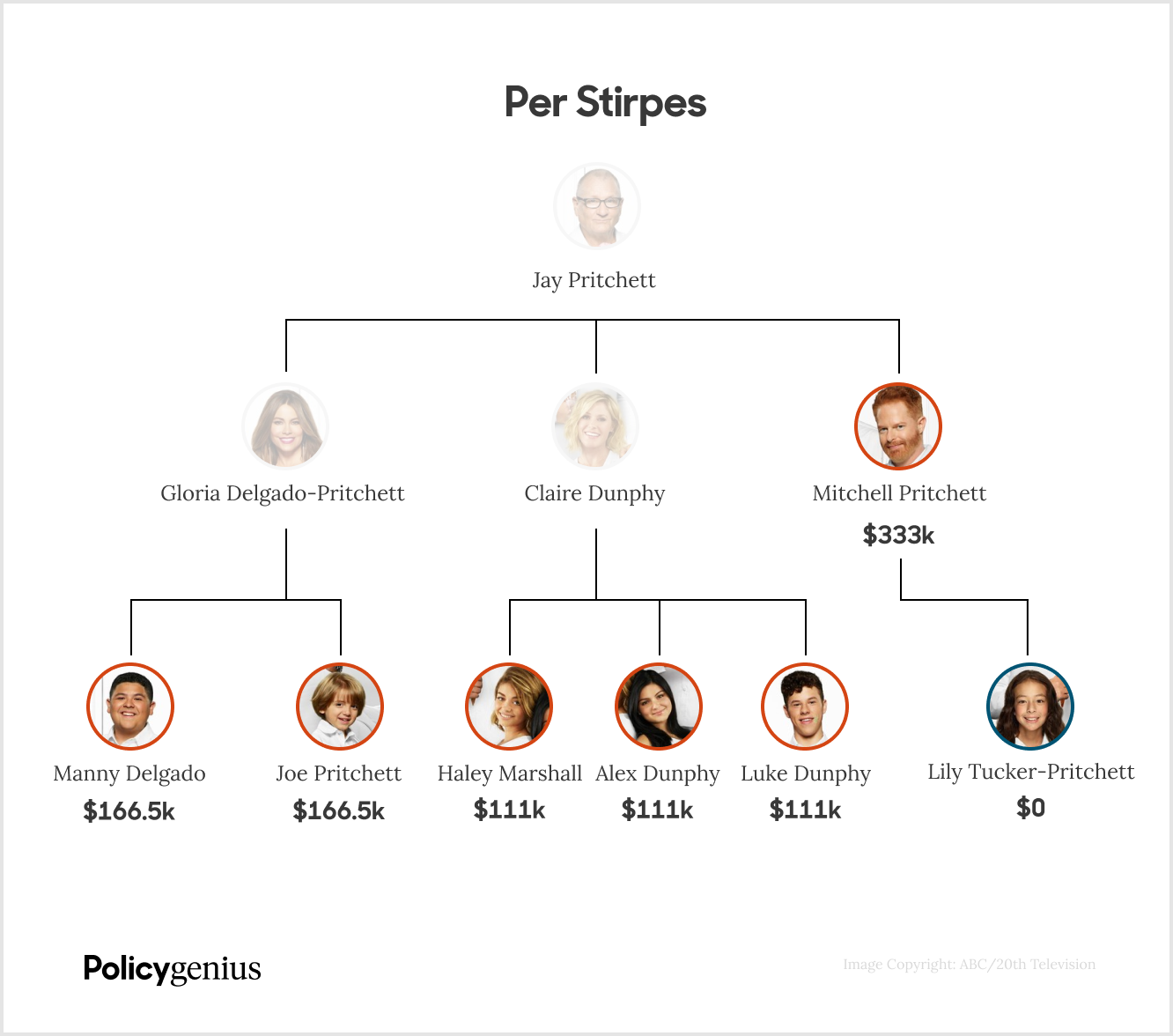 For step-by-step guidance on creating a will that covers all your desired beneficiaries, try Policygenius.

Per stirpes and per capita are two different ways of distributing a deceased person’s inheritance if one (or more) of the beneficiaries in their will predeceased them. If someone’s beneficiary predeceases them, the per capita method would result in the deceased beneficiary's share being returned to the estate and then divided among the living heirs, while the per stirpes method would pass the deceased beneficiary's share to their next of kin (often their children) without affecting the remaining shares that the other heirs receive.

Per capita (meaning "by head" or by "headcount") divides an estate equally within a generation and a predeceased heir’s surviving descendants may not be entitled to anything, unless you said so in the will. Let's look at an example of per capita distribution, using our example from the previous section. If you name only your three children as beneficiaries in your will and two of them predeceases you, the assets will go only to the surviving child. No one from the succeeding generation (including the children whose parents just passed away) will get a share of the inheritance. 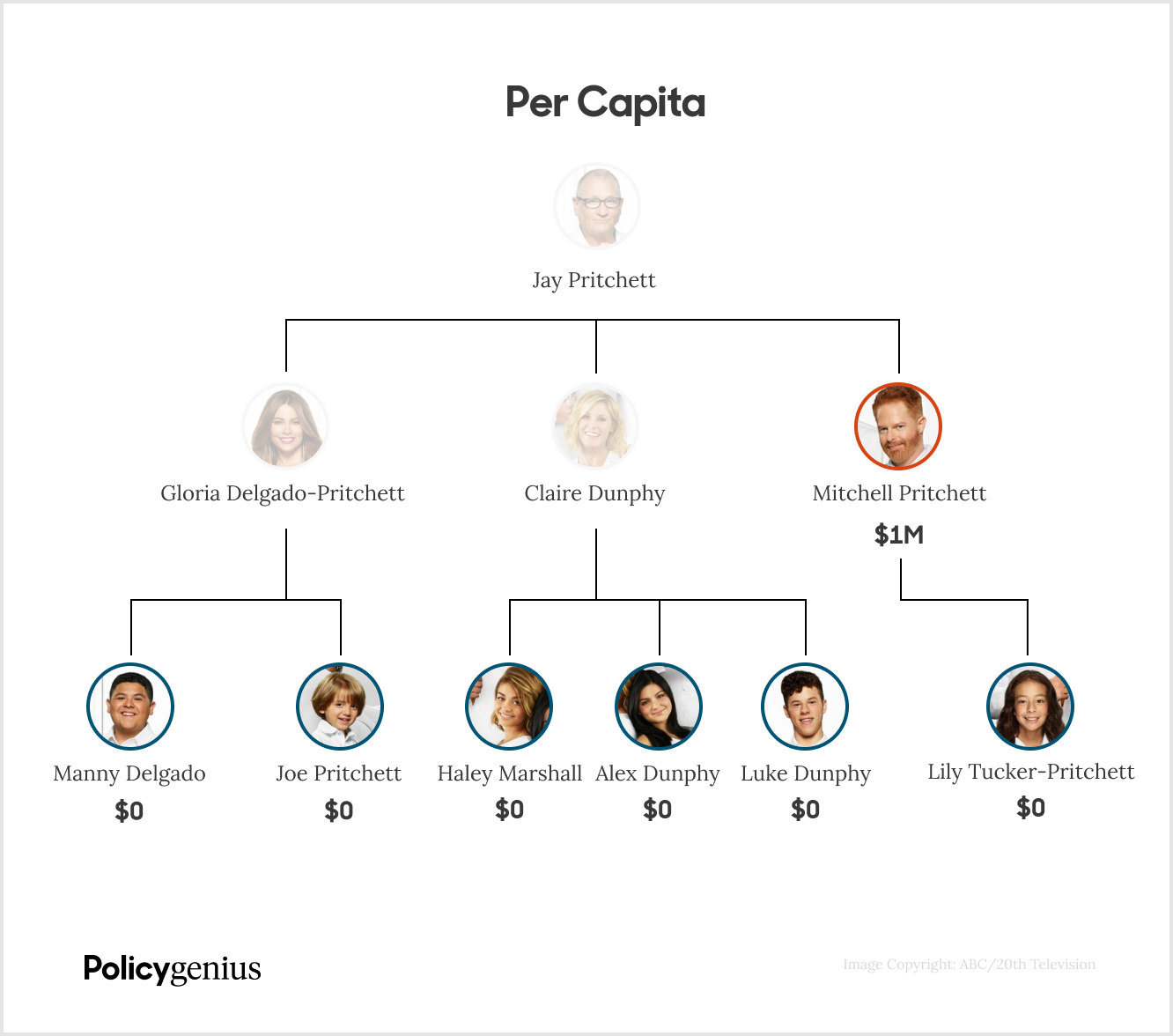 On the other hand, if you name all of your children and grandchildren as beneficiaries and designate your assets to be distributed per capita, then everyone will receive an even split — one-eighth of a share. If any of them predeceases you, their share will go back to the estate and everyone will now receive a one-seventh share.

Per stirpes and per capita, may be further broken down into two other ways that a state may opt to divide up your estate if your beneficiaries predecease you:

Per capita at each generation

With a per stirpes distribution there is the potential for surviving heirs to end up with unequal shares of the estate, in the event that the main beneficiaries (testator’s children) are all predeceased. As demonstrated in the per stirpes example above, all of the grandchildren — who have the same level of kinship — received different amounts.

To remedy this, you can bequeath your assets to your descendants "per capita at each generation.” In this method, remaining shares of a deceased beneficiary are pooled and then divided equally at the next generation.

Let's take a look at our example once again. To reiterate, you (the testator) have three children, and five grandchildren. Your oldest child has no two, the second child has three, and the third has one.

If you die, and the first and second child have predeceased you, this is how people receive assets with per capita at each generation: 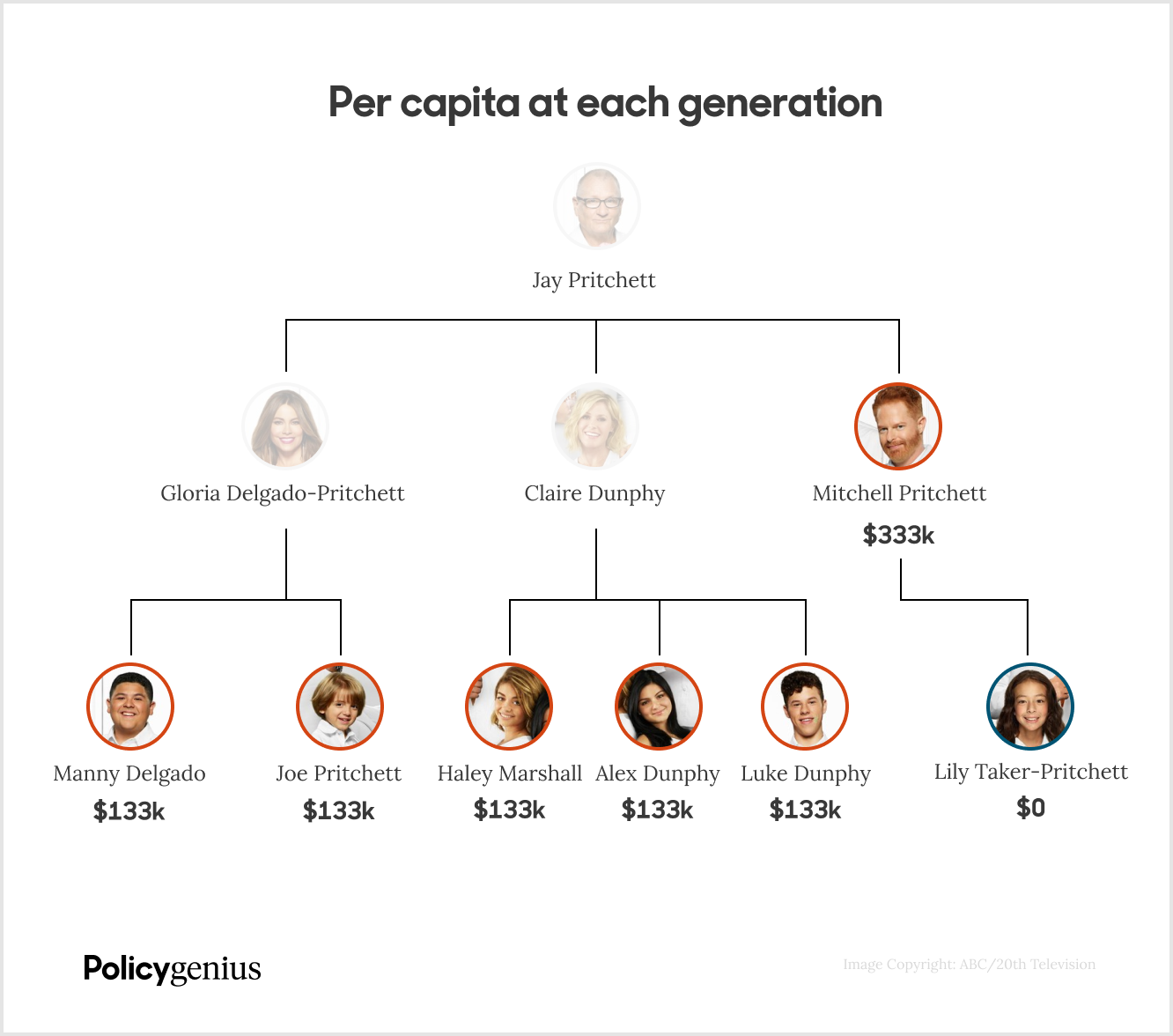 Per capita at each generation can help surviving descendants of the same generation to inherit equally. The estate is divided equally among all grandchildren in our example. Some people might find this more fair and prefer a per capita in their estate planning.

Per stirpes by comparison divides your estate by the number of your predeceased beneficiaries, then divides it up again for each predeceased beneficiary’s child. This means if Child 1 has fewer children than Child 2, then Child 1's children get more of the inheritance, since it is being divided among fewer people. (A grandchild who is an only child would receive more than a grandchild that has siblings.)

Per capita with representation (modern per stirpes)

There is another variation on per capita and per stirpes called modern per stirpes or, confusingly, per capita with representation. This method of distribution is similar to classic per stirpes, but it takes into account whether only some or all beneficiaries in a generation are deceased.

Designating beneficiaries per stirpes can be useful and help protect your legacy if one of your named beneficiaries predeceases you. As we've seen, it can help to ensure that an inheritance gets passed down the branches of your family tree.

However, the term might leave room for ambiguity and interpretation that you did not intend. As discussed, there are some variations on per stirpes and per capita, and it might not be sufficient to write "to my living descendants, per stirpes" in your will without fully explaining it. State law tends to take precedence if you aren't clear about your intentions. This could get tedious, so you should consult an estate planning attorney to ensure the rightful heirs get the proper inheritance you intended.

One way around per stirpes is to name a contingent beneficiary, who receives the asset when the primary beneficiary has died. It’s also good to update your will as frequently as needed.

You can create a will using attorney-approved tools with Policygenius.

A per stirpes designation isn't limited to estate planning. Retirement accounts, like an IRA, might have preset rules in place as to who gets the assets if your primary beneficiary predeceases you. If you don't like the pre-established guidelines, you can try to modify the beneficiary designation form to distribute your assets per stirpes.