When a job's worth putting on a resume, told by fired Trump staffers Steve Bannon became the latest casualty of the Trump White House this month, exiting his role as the president’s chief strategist after just 275 days. That’s a relatively brief time on the job — just under nine months or, more pointedly, short of a year, the typical amount of time accepted as an adequate stay at a company. 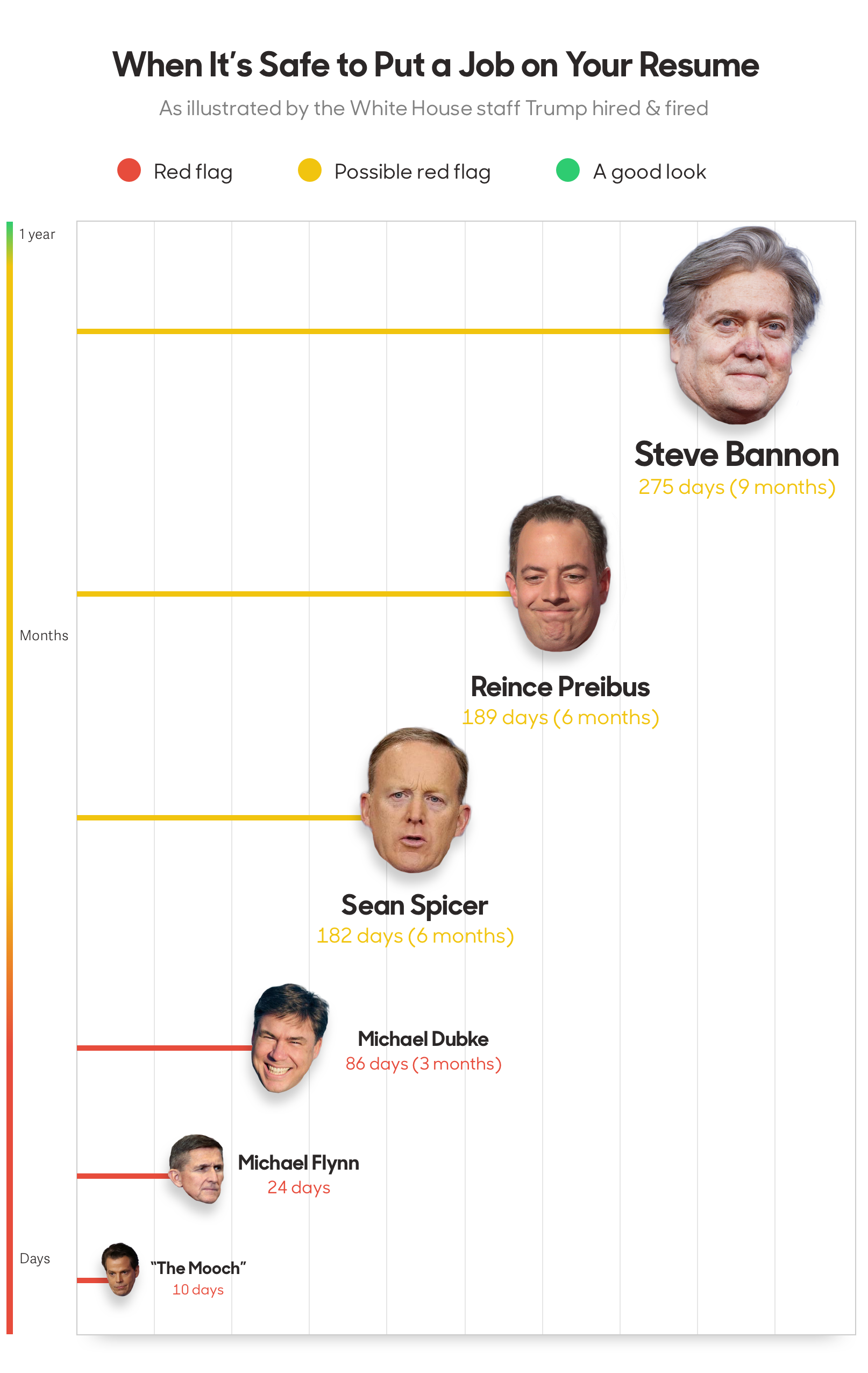 As you probably noticed, quite a few Trump staffers have missed that 12-month mark — and by a much wider chasm than Bannon, who, to be fair, joined the Trump campaign last August. The most egregious example, of course, is Anthony “The Mooch” Scaramucci, who lasted either 10 or -15 days as White House communications director, depending on whether you count from his unofficial start date (July 21) or official start date (August 15).

The White House’s endless revolving door makes for good headlines, but it also helps put a persistent career question in context: How long do you need to be at a job before it’s worth adding to your resume?

When does a job become resume-safe?

The answer can vary, but “for most jobs, if you have worked there for six months and have a solid reason for leaving that role, it should be OK to list,” Lauren McAdams, career adviser and hiring manager at ResumeCompanion.com, says.

By that metric, most of the staff Donald Trump hired and fired since taking office on January 20 fail. (Note: We’re not counting federal employees like former acting attorney general Sally Yates or former FBI director James Comey, who had long tenures under President Barack Obama before getting Trump-ed.)

Both former White House chief of staff Reince Priebus and press secretary Sean Spicer are right on the 6-month bubble, clocking in at 189 days and 182 days, respectively. Former communications director (yes, another one) Michael Dubke lasted less than three months (86 days) and former national security adviser Michael Flynn might as well have Mooched, resigning after just 24 days on the job amid reports of potentially illegal communications with a Russian ambassador.

When does a job become resume-friendly?

Of course, there’s a big difference between “OK to put on your resume” and “good for your resume.” People who made it solely six months will still undoubtedly face questions about their hasty exit during any interviews they land — and, if you’ve held one short gig after another after another (outside of contract, seasonal, freelancing, consulting work, etc.), you might even have some trouble getting that foot in the door.

“An optimal resume showcases not only your abilities as an employee, but reliability as well,” McAdams says. To do demonstrate true commitment, she suggests putting in two years — not the requisite one — with an employer.

“Switching jobs every year would raise some red flags,” she says … especially if you have a prior history of job-hopping.

“I guess if someone had three positions on a resume — one for five years, one for two years, and one for only a year — I wouldn't be so worried about reliability because there is evidence of longevity,” she says. “But if the longest duration with a company is only a year, and there are a bunch of those, that would be concerning.”

Admittedly, a short stint at any job originally envisioned as a full-time gig creates a “damned if you do; damned if you don’t” situation. Put the job on your resume and expect to field some uncomfortable questions. Leave it off and you’ve got a gap to explain.

“It is important to put every job you have on your resume, regardless of your tenure,” Lori Scherwin, founder of Strategize That, says. “Whether it’s 20 years, or 20 minutes, you have an obligation to disclose your entire work history to potential employers. Omitting any experience can leave you at risk of being found out and outed as a liar.”

Ultimately, it’s your call, though remember, you can also always consult a professional. There are also some things you can do to soften a resume blemish in general.

Looking for more job tips? Here are psychological traps sabotaging your career to look out for.