Many Americans are foregoing medical care because they’re unsure of what’s covered by their health insurance, a new Policygenius survey finds.

More than one in four people (27.2%) said uncertainty over their coverage had led them to avoid treatment. People making higher incomes were less likely to avoid care, but even among respondents making at least $100,000, nearly 20% said they had skipped treatment.

"The problem is the rules aren't clear and the consequences are really high," said Catina O'Leary, president and CEO of Health Literacy Media, a nonprofit based in St. Louis that promotes understanding of health information. Many people decide to wait to get medical care if they won't know the cost rather than risk a surprise bill, O'Leary said.

Almost half of respondents said health insurance covered none of the listed benefits, including hospitalization and mental health care. This lack of knowledge may help explain why so many people avoid care due to uncertainty over their coverage.

Policygenius has surveyed people about health insurance literacy for the past three years. Our cumulative findings suggest that people are increasingly confused about the law and their coverage. We asked about the same six essential health benefits in 2018. While 28% thought health insurance plans were required to cover none of the benefits that year, 44% held this incorrect belief in 2019. 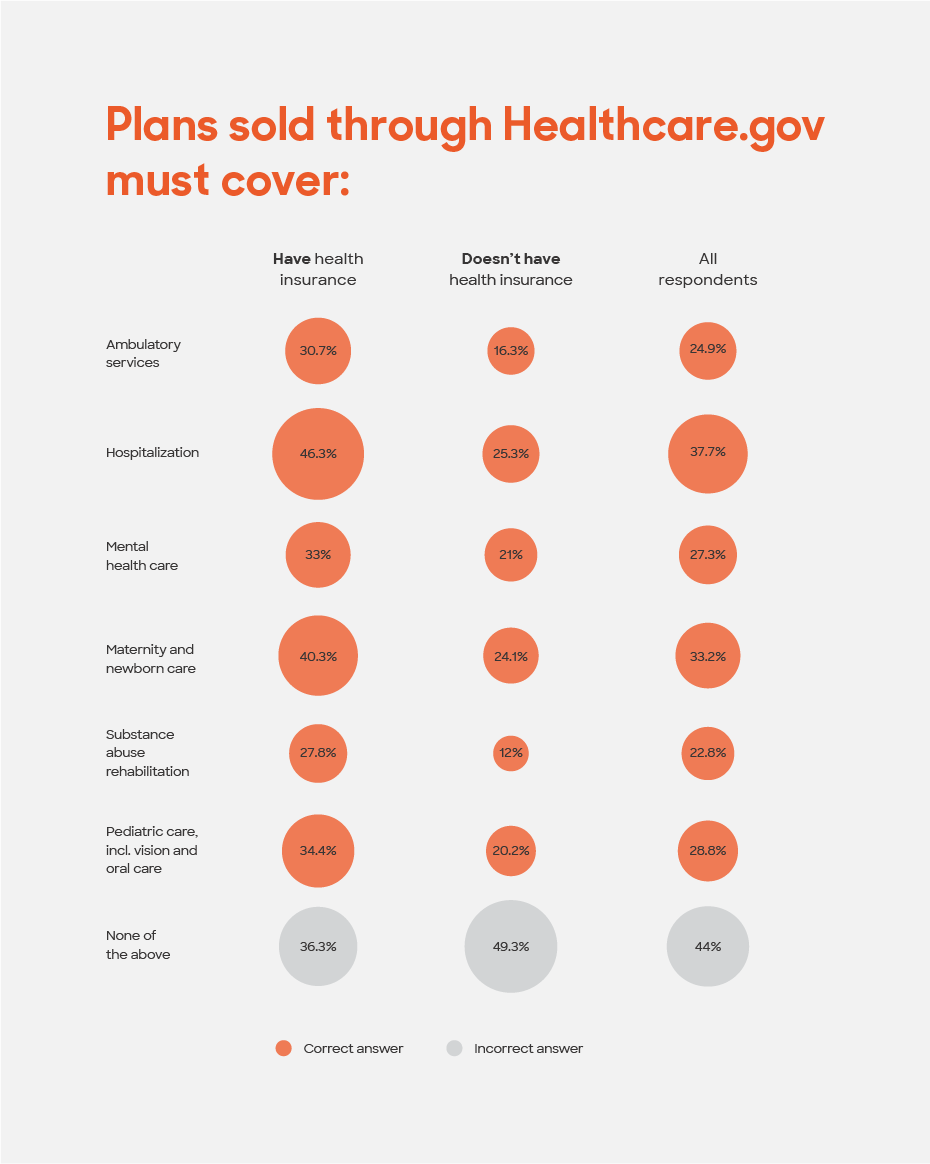 In addition, 21% of people were able to name the correct dates for open enrollment on Healthcare.gov (Nov. 1 to Dec. 15) in 2018, while only 11.9% were able to do the same this year. (Note: This year’s survey included a “None of the above” choice, while last year’s survey did not.)

Respondents also had trouble with basic health insurance terms like copay, deductible and premium. Fewer than a third of people were able to correctly define all three terms.

"It's almost like speaking a foreign language," said Christine Wilson, a spokeswoman for the National Patient Advocate Foundation, the advocacy arm of a nonprofit that helps patients with chronic and life-threatening illnesses gain access to health care

But you have to speak the language to make informed choices, she said. Beyond these basic terms, people need to understand the relationships between them. For example, higher premiums (the amount you pay each month for insurance) often mean lower deductibles (the amount you pay before coverage kicks in).

"We tell everybody you need to take the time to understand what you're buying, what your health insurance covers," Wilson said.

The foundation sees the results of a lack of health insurance literacy up-close.

"People call and say, 'I've got a shoe box full of bills. I had no idea they weren't covered,'" Wilson said.

Why is health literacy so low?

Health care has been a major political issue since the passage of the Affordable Care Act. All that attention has come with misinformation, particularly in the last few years as politicians have debated in the news and in court about whether the health care law should be struck down.

For example, O'Leary said many people believe plans sold on the marketplace aren't "real" health insurance plans — they are. While plans differ in how costs are shared, employer plans and marketplace plans must cover the same essential benefits.

The Affordable Care Act has led to greater insurance coverage (except for the most recent year), but the Patient Advocate Foundation saw its workload grow after the law passed. While fewer people are uninsured, many people are still underinsured, Wilson said.

"We're actually getting more calls from people who are trying to figure out what the right thing to do is," she said.

In addition, as the cost of health care has increased, insurance companies are shifting more costs to consumers. The average annual deductible has doubled over the last 10 years among employer plans with deductibles, according to a survey from the Kaiser Family Foundation, a nonprofit conducting health policy analysis.

"If you shift the frame back say, even 20 years ago, people didn't know what cost but it didn't matter because their insurance company just covered it," Wilson said.

The growth of short-term health plans, which offer low premiums but limited coverage, only adds to the confusion, she said. Consumers have plenty of choice, but also bear more of the financial risk if they make a bad choice. 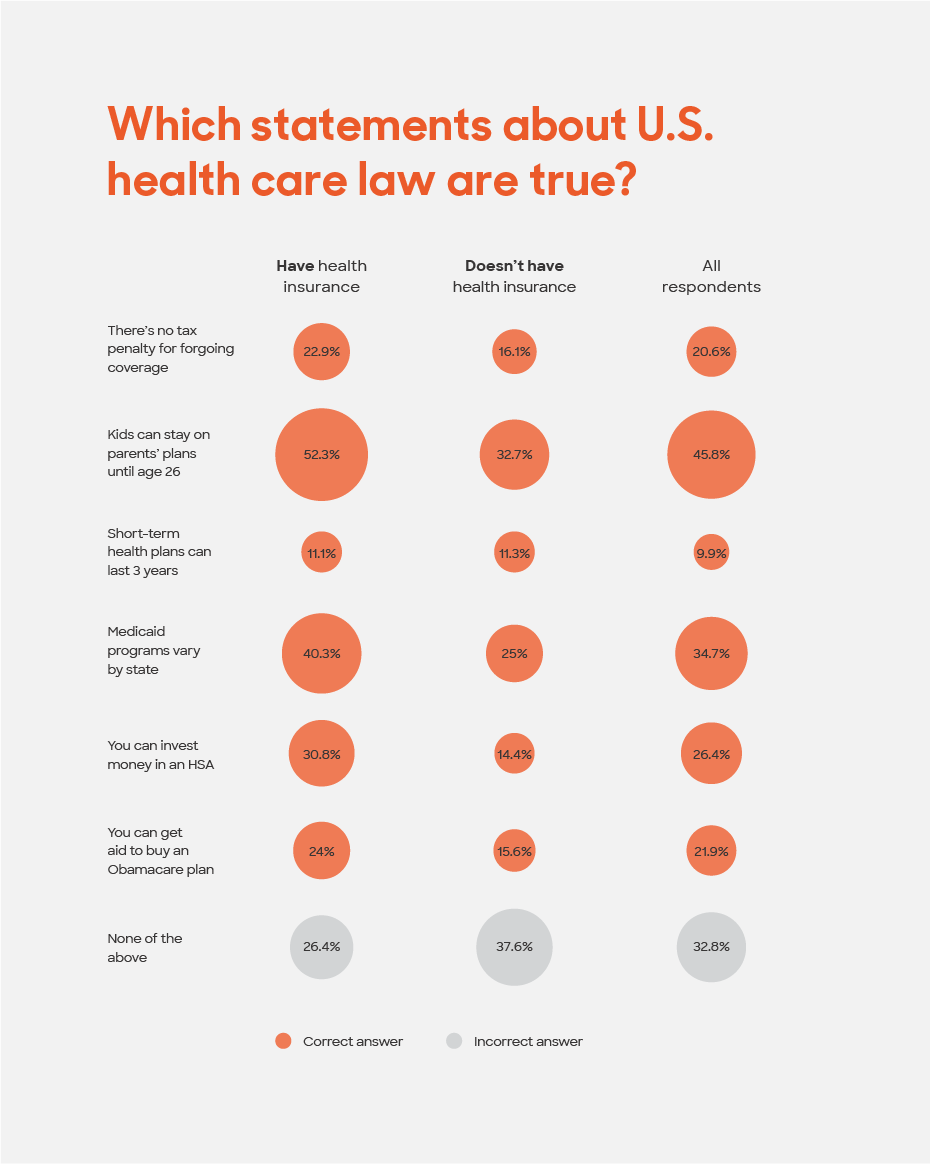 How to improve your health insurance literacy

There are many places to turn if you need help understanding health insurance. If you have an employer plan, the best place to start might be your human resources department or benefits provider. If you have or want an Obamacare plan, Healthcare.gov can point you toward local organizations and brokers that can help you shop.

Health Literacy Media has created a series of two- to three-minute videos explaining various health insurance concepts, from how to enroll to how to use your coverage.

Our Health Insurance Learn Center is filled with helpful information, including our guide on how to choose a plan that's right for you. Policygenius can also help you compare and buy plans.

You can download the Policygenius Health Literacy Survey 2019 data highlights below.