Healthcare has dominated many news cycles over the last few years, thanks to the 2016 presidential election and Congress’ subsequent attempts to undo the Affordable Care Act (ACA), also known as Obamacare.

But the barrage of headlines hasn’t exactly given the public a better understanding of our current law of the land. According to Policygenius’ latest healthcare literacy survey, 78% of Americans can’t identify the essential health benefits insurers must cover under the ACA. And a staggering majority (76%) have no idea when this year’s federal Open Enrollment — set to kick off on November 1 and end December 15 — is taking place. 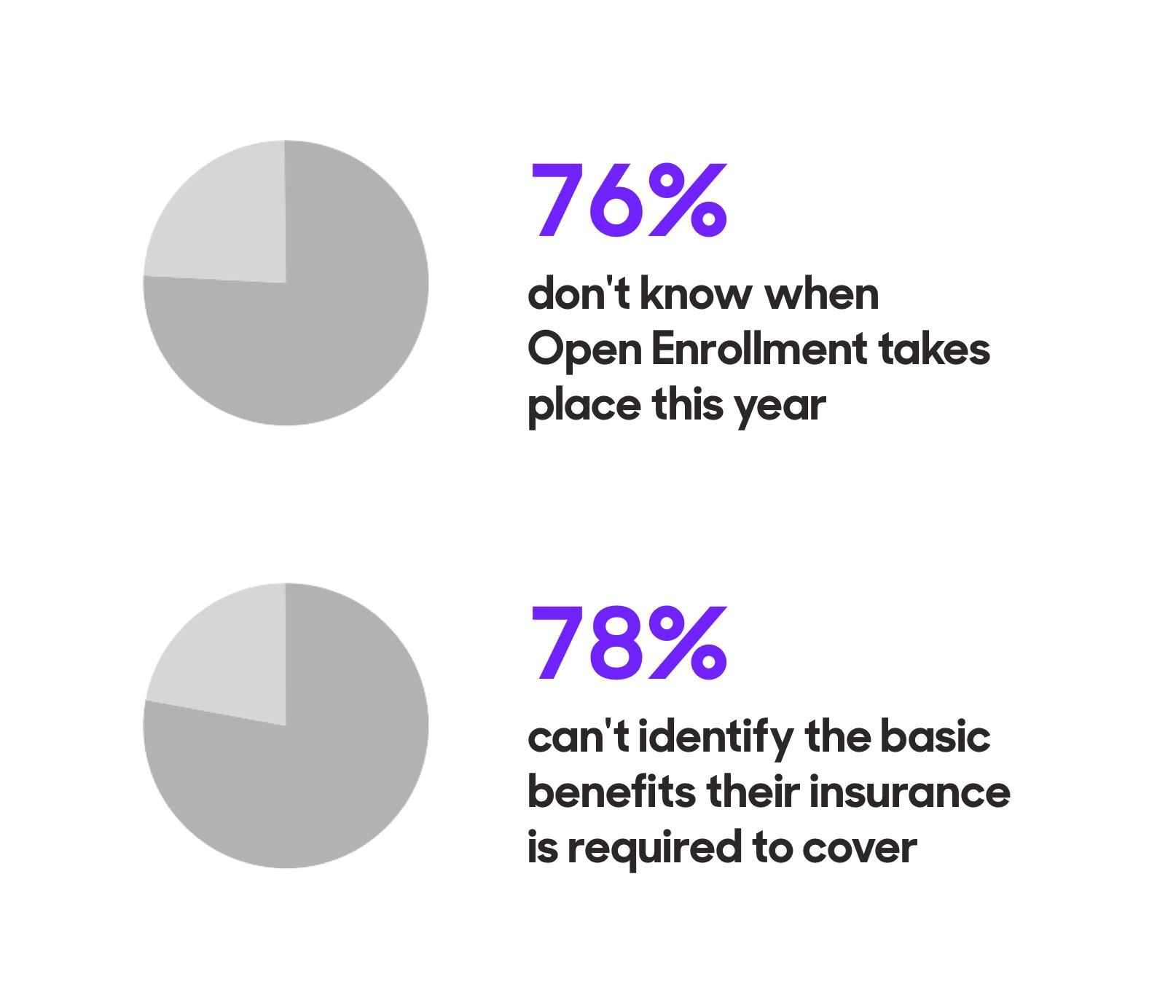 “After our last survey, we were surprised at the lack of understanding when it came to general health insurance concepts,” says Policygenius CEO Jennifer Fitzgerald. “This year, we learned that confusion extends to Obamacare, which is worrying for the more than ten million people who have health insurance thanks to the ACA.”

Confusion extends beyond dates and details: Nearly one in five Americans (over 18%) are confused as to whether or not the ACA is still the law of the land. (It is.) And asked differently, over 13% of respondents say they thought Obamacare had been repealed.

Those responses seem counterintuitive, given how often healthcare made the news in 2016 and 2017. But it’s possible so much attention only caused confusion. There have been five variations of bills intended to replace, or simply repeal, the ACA introduced by Republican lawmakers since March 2017. And, in the middle, Bernie Sanders released a “Medicare for all” plan.

“It’s not unreasonable for a casual observer of healthcare news to think the ACA has actually been overturned,” Fitzgerald said. “And, in fact, under the Trump administration, many things related to Obamacare have changed.”

Take federal Open Enrollment, for instance: It’s running half as long as it did last year, when it ended in January. Adding to the confusion, some state-run exchanges, like California and New York, have extended enrollment periods.

In early October, the Department of Health and Human services rolled back provisions guaranteeing healthcare coverage for birth control. Shortly after, President Donald Trump announced plans to stop paying long-contentious cost-sharing reduction subsidies to insurers, upending state marketplaces at the last minute and causing premiums to skyrocket for some people.

To top it off, these changes – or lack thereof – aren’t being communicated broadly to people.

Earlier this year, the Trump administration slashed the ACA’s advertising budget 90%, from $100 million to $10 million. It reportedly defended the budget cutbacks by saying most people already know about the ACA.

Grassroots advertising efforts to make people aware of Open Enrollment have cropped up in the wake the Trump administration’s decision. Still, “outside efforts fall well short of what could be done with the full advertising force of the federal government,” Fitzgerald said.“The seemingly up-in-the-air status of the ACA, and the lack of outreach by the federal government, are making Open Enrollment ripe for confusion.”

There’s something to say about some people not understanding that Obamacare and the ACA are the same thing, but more importantly we see that people who don’t know that Obamacare is still in effect are less likely to know about the protections it provides. 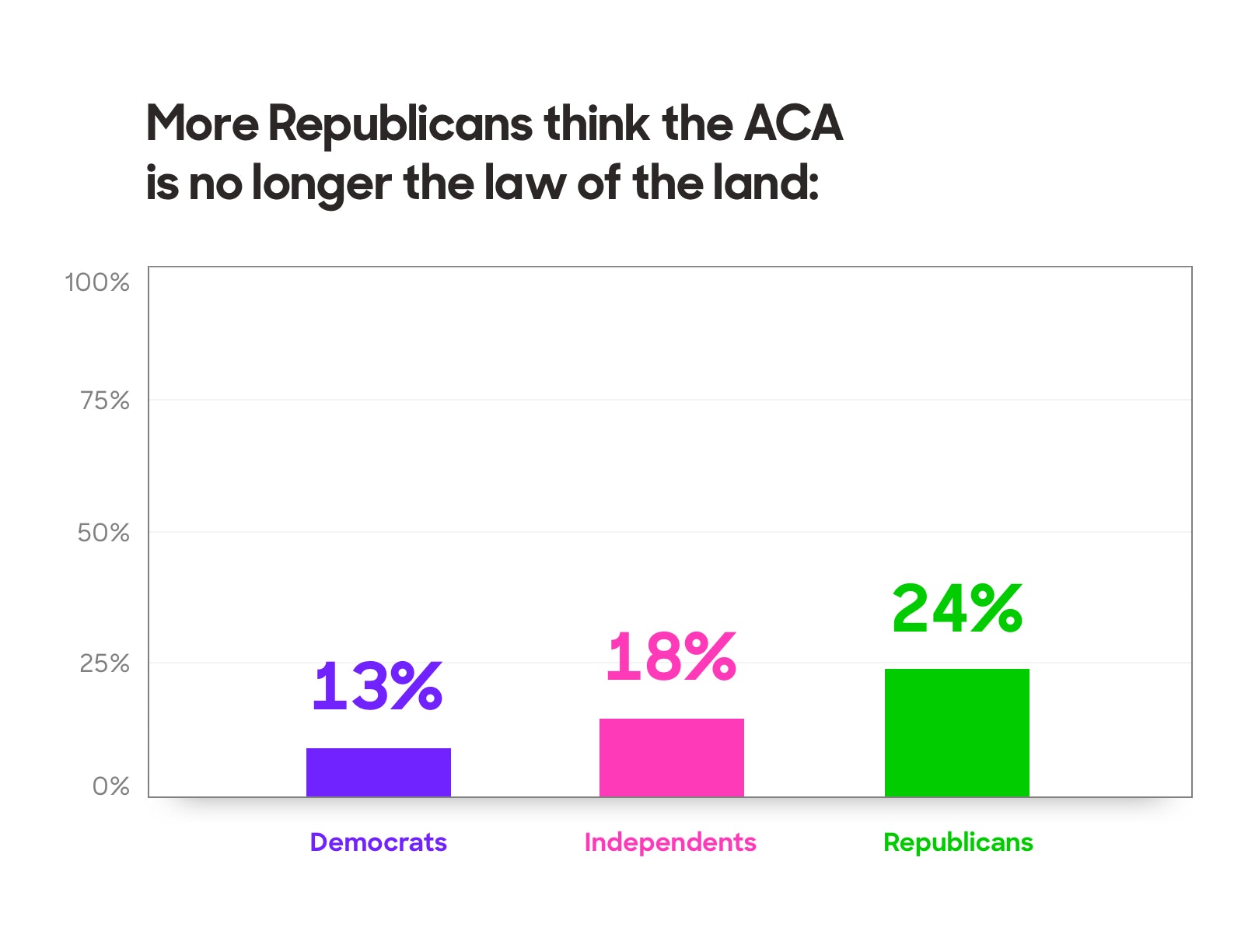 People who think Obamacare was repealed in 2017 are:

What’s concerning about these findings is that if people aren’t aware of what their health insurance covers and what it doesn’t, that could lead to them to make the wrong choices about the right coverage for themselves and their family.

While overall sentiment toward Obamacare has improved in recent months, it’s still true that Democrats and Independents are more likely than Republicans to favor the law. But does party affiliation also affect understanding of the law? 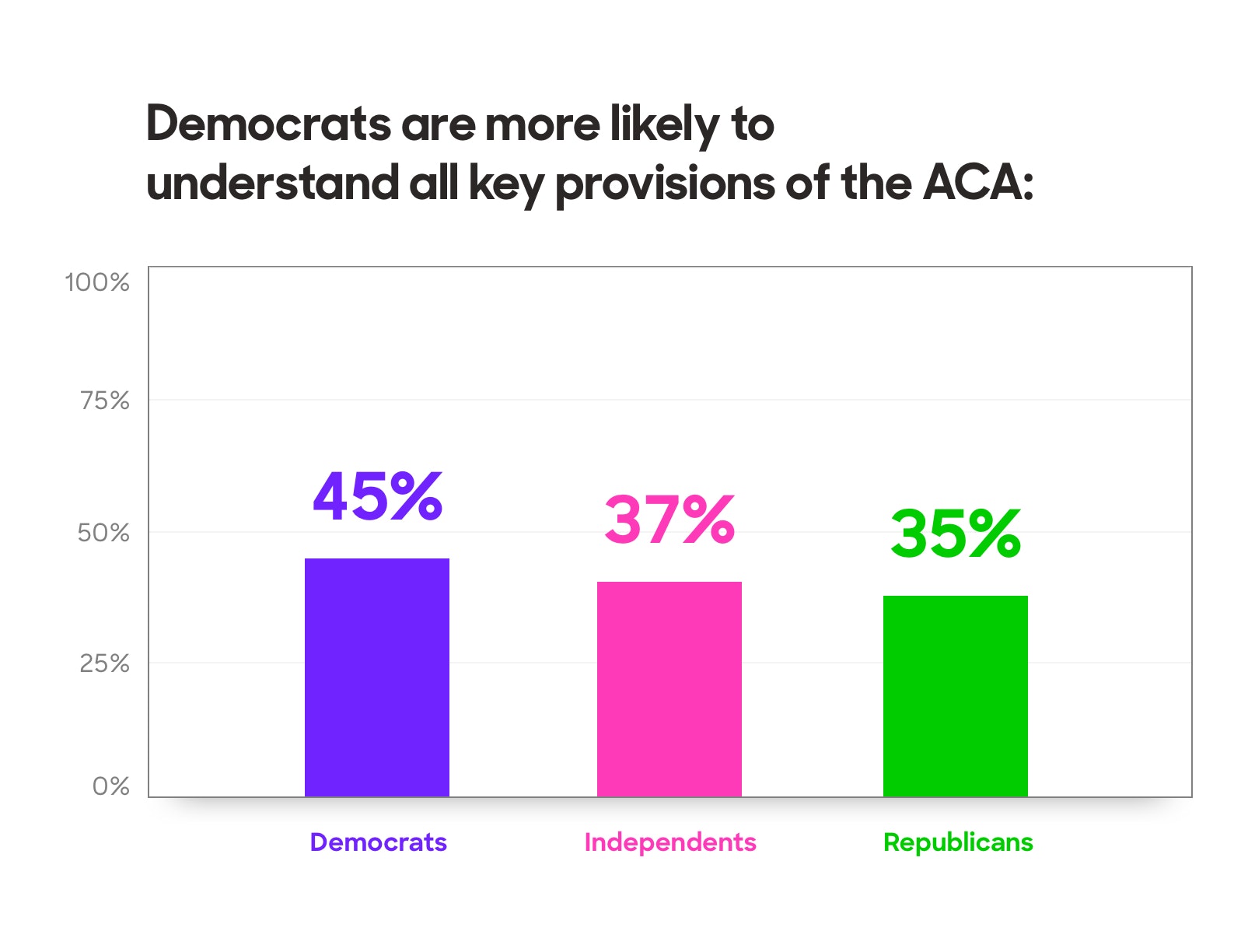 Turns out, yes — to a degree. While knowledge of when Open Enrollment runs is uniform across party lines – about a quarter of Independents know the correct time period, followed by Democrats and Republicans at around 24% and 23%, respectively – overall, Democrats, are more likely to know details about ACA benefits. That includes: 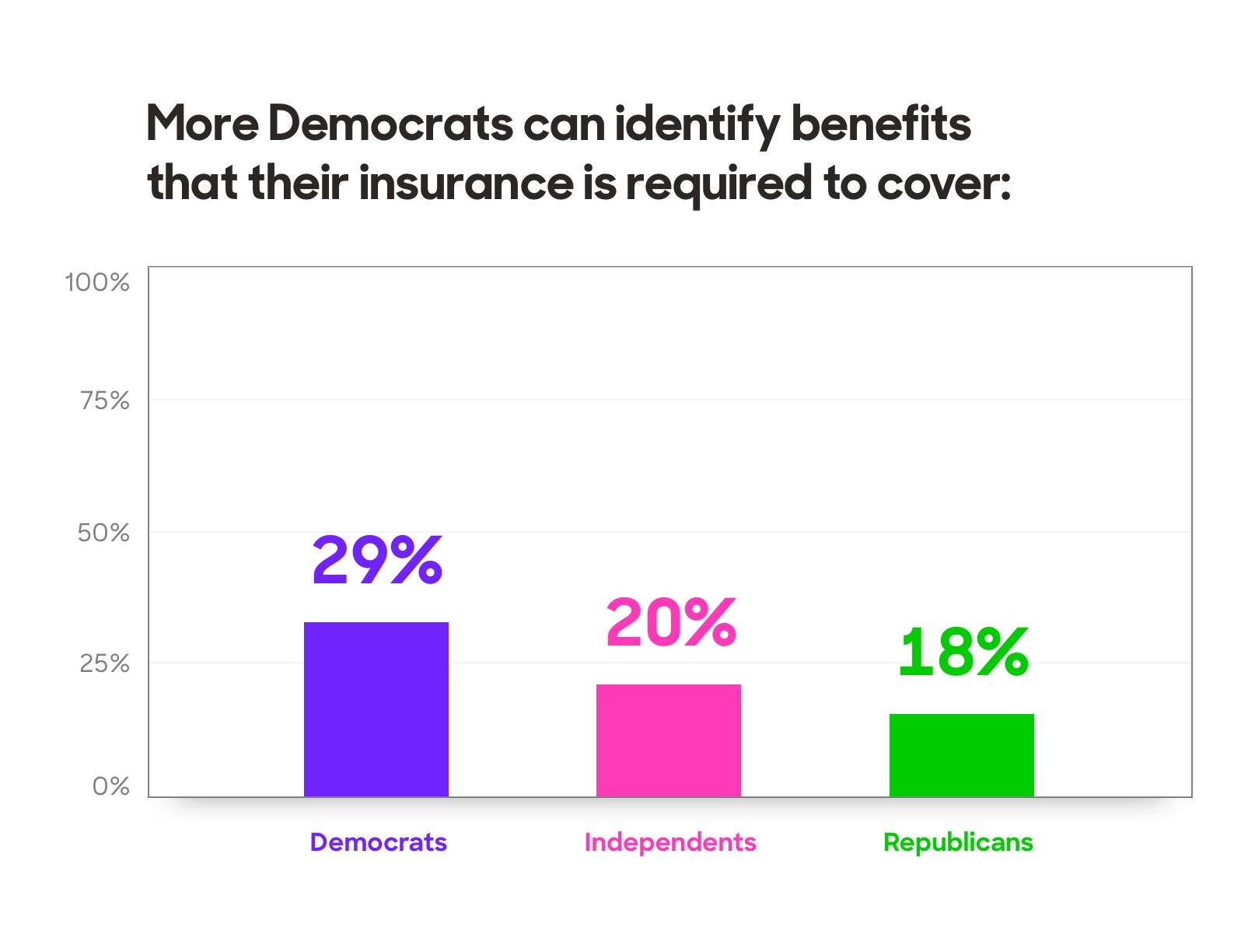 “Democrats and Independents are more likely to fight for the law — and more likely to know what they are fighting for, and what provisions would be lost if the ACA was repealed,” Fitzgerald said.

Health insurance isn’t top of mind for most people. You can usually only enroll in a plan once a year, a majority of people have health insurance through their employer, and if there’s a medical emergency you’re not really thinking about your insurance.

But it’s important to know the details of your healthcare plan. It could mean the difference between getting the care you need and facing bankruptcy due to medical bills.

“There are resources out there for people to get information,” says Fitzgerald, “whether it’s insurance companies and brokers, state exchanges, groups like the Kaiser Family Foundation, or the grassroots campaigns popping up on social media. Considering the lack of support from the federal government, it’s never been more important for people to educate themselves – and for resources to be made available to them.”

Shoppers can visit Policygenius for shopping tips and the most up-to-date information on premiums and insurers in your state, and the latest ACA news.