Over two years ago, I wrote an article titled “You Need A Budget could save your life. ” Hyperbolic? Possibly. But I know for a fact that if I hadn’t started using You Need A Budget, the budgeting app affectionately referred to as YNAB (why-nab) by fans, my bad money habits would’ve only gotten worse.

When I first built a budget in YNAB, I was about $3,000 in consumer debt. This number isn’t insane – CNBC reports that the average American family owes over $8,000 in credit card debt alone – but my habits were unsustainable, and without a wake-up call, my debt would’ve grown out of control.

YNAB helped provide that wake-up call. The app is based around four rules that the YNAB team collectively calls “ the Method .” Everything in the app is built around these rules, which help you structure a budget that encourages good financial decisions.

Talking about “rules” and “the Method” might make YNAB sound super strict – and to a certain extent, it is – but it’s flexible enough to fit a wide variety of people, incomes, and budgets. The app isn’t going to force you to spend less on eating out, for example – it’s just going to force you to spend the money you actually have, and not go into debt to sustain an unsustainable habit.

I’ve loved YNAB ever since I started using it, and have been singing its praises both in my personal finance writing and to friends for years. But YNAB has always had an Achilles’ heel: the mobile app. While the app allowed you to view your budget and add transactions on the go, it wasn’t possible to completely handle your budget from the app. In a world where you can almost exclusively manage your finances from your phone , having a mobile budgeting app that didn’t allow you to actually budget was inexcusable.

It took a while – over a year-and-a-half after the launch of their web-based “New YNAB” – but You Need A Budget finally heard the cries of “you need a serviceable mobile app.” With the new mobile app, You Need A Budget has cemented its place as the best budgeting solution out there, with no major weaknesses holding me back from recommending it.

A quick recap of You Need A Budget

You Need A Budget is a web-based app – like Mint or Betterment or Gmail. That means that you can access it from pretty much any device with a web browser, though it is optimized for computers. YNAB costs $50 annually, and has a 34-day free trial for newcomers. 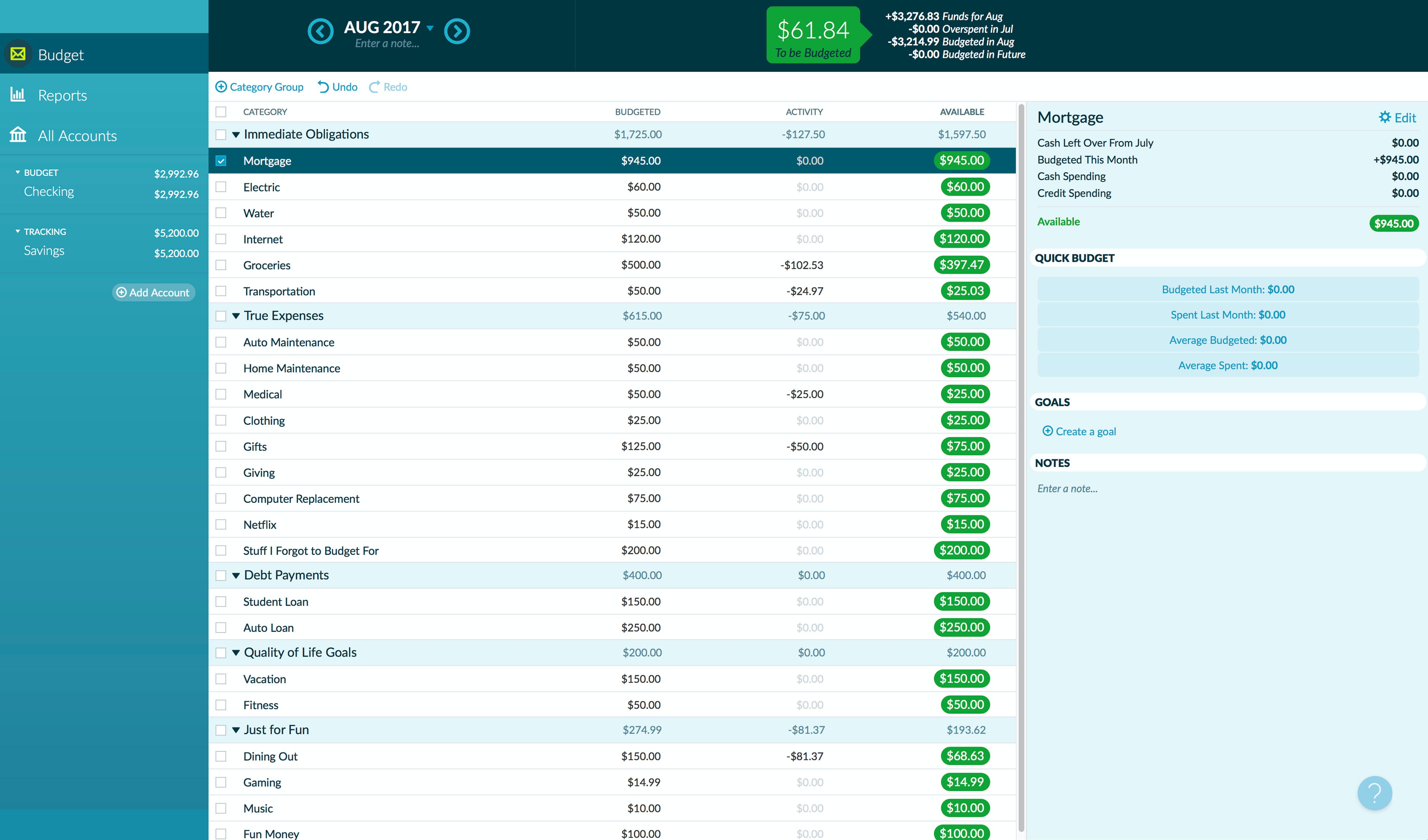 Unlike other budgeting tools, YNAB doesn’t start automatically categorizing your expenses once you import your transactions. Instead, you need to set up different categories (and subcategories) and decide how much of your money to assign to each category. To quote YNAB’s Method , this is “Rule One: Give Every Dollar A Job.” The idea here is to be intentional with your spending, and to always know exactly how much you have to spend on things like groceries, clothes, bar tabs, video games, avocado toast, etc. (That doesn’t mean you can’t be flexible – “Rule Three: Roll With The Punches” helps with that.)

You can be as general or specific as you want with categories. For example, I break out each of my monthly subscriptions into separate categories, but another person might lump Netflix and Hulu and Spotify all together.

Besides wanting you to know exactly how much you have to spend, YNAB also wants to make sure you only spend what you have. This is “Rule Two: Embrace Your True Expenses.” The idea here is to anticipate future expenses, and understand that you may need to put aside money this month for an expense next month, or a few months down the line.

To help you budget for future expenses, YNAB allows you set a funding goal for each category. There are three different types of funding goals:

For anyone struggling to deal with credit card debt, or people who want to use credit cards for the points but have a hard time budgeting for, YNAB’s way of dealing with credit card payments may be a godsend. When you connect a credit card account to your budget, YNAB automatically creates a Credit Card Payments category, with a subcategory for that credit card. When you make a transaction on your credit card that you’ve budgeted for with real cash from your bank account, YNAB automatically moves that money into the credit card payment category. Even though you haven’t actually taken that money out of your bank account yet, YNAB wants to make sure it’s been marked as spent.

Here’s a real life example. You go to Whole Foods and buy $130 worth of groceries on your Discover Card. The next time you fire up YNAB, you enter that transaction into your budget, assigning it to your “Groceries” category. YNAB moves $130 from “Groceries” to your “Discover Card” payment category. When you go to make a payment on your credit card, you’ll see that you have $130 budgeted towards the payment in YNAB.

You can treat credit card payment categories just like other categories – you can take money out of the category if you decide you want to go into debt, you can assign money directly to the category to help pay off existing debt, and you can set up funding goals to help you pay off large chunks of debt in a reasonable time frame.

The last major feature in YNAB is the “Reports” section of your budget. There are three types of reports: Spending, Net Worth, and Income v.s. Expense. Reports are a lot of fun to play around with, especially the Spending report; it’s based on categories that you’ve created, you can often gain more insight into your budget with YNAB than with other apps that rely on auto-categorized transactions.

What’s so great about the new You Need A Budget mobile app?

For as long as there has been a YNAB mobile app, it has been hobbled in comparison to the full web app (and before that, the desktop app). No longer – with the new update released last month, the YNAB mobile app has the exact same feature set as the web app.

The new YNAB mobile app adds in crucial features like direct import, which allows you to pull transactions from your bank and credit card accounts on the go. You can also set new goals, move money between categories, and even view your reports – all from the comfort of your phone or tablet. 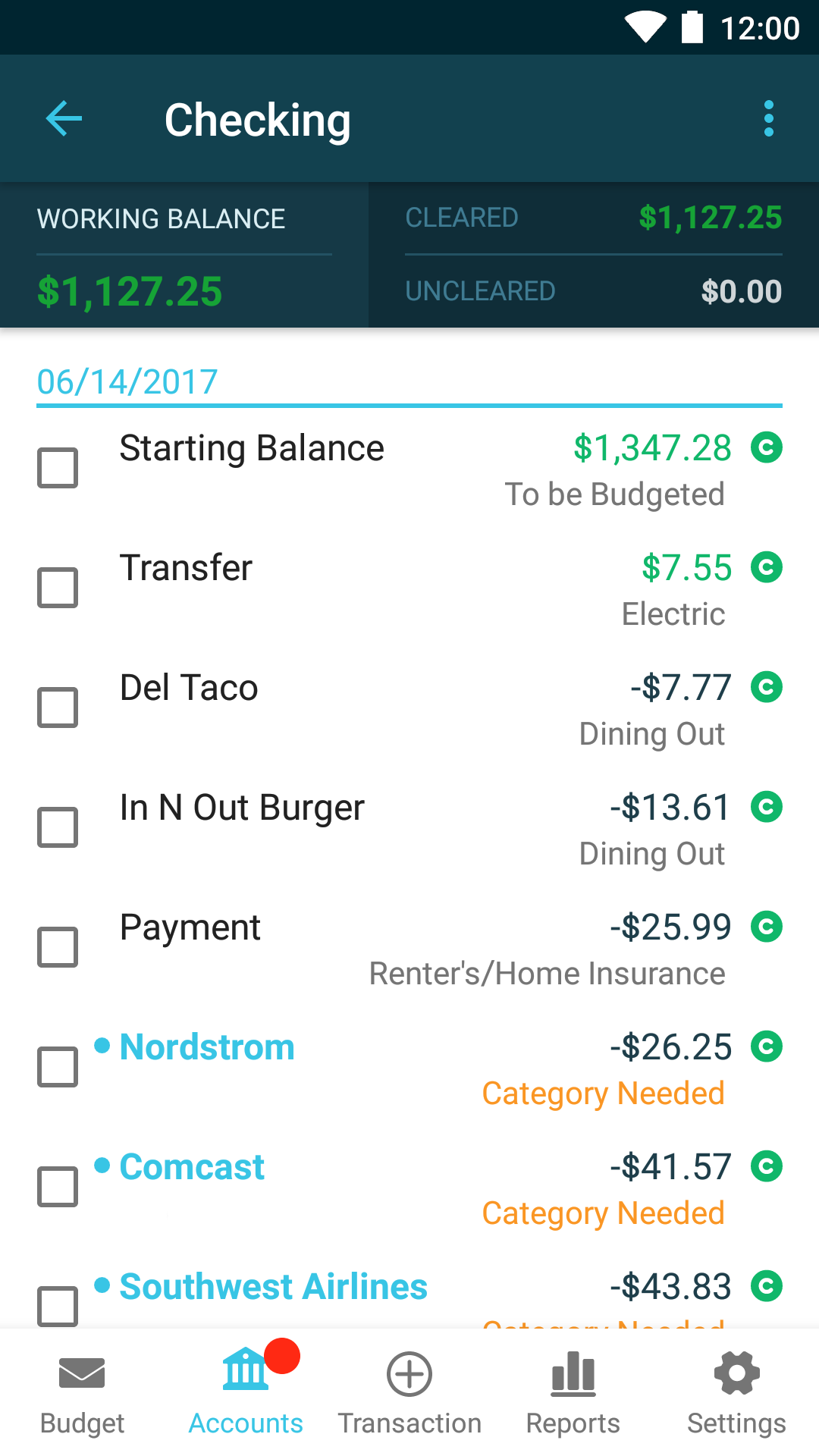 In many ways, YNAB is playing catch-up – there are a number of iOS and Android budgeting apps that don’t require a desktop or web companion. But at the same time, YNAB’s new, full-featured app is more useful than any other tool available on mobile. In one move, the YNAB mobile app both caught up to and leapfrogged the existing mobile competition.

What makes the YNAB mobile app so good is that it’s all about the philosophy of budgeting. While most mobile budgeting apps can help you be more aware of where your money is going, YNAB takes it a step further by deeply integrating their “Rules” into the design of the app. If you don’t follow the Rules, the app becomes unusable – this can create a bit of a learning curve for new users, but for many people, it’s exactly the kind of wake-up call that they need.