Health care was a top issue for voters before the pandemic, but Americans’ understanding of health insurance has not improved.

Health care was a top issue for voters before the pandemic, but Americans’ understanding of health insurance has not gotten better, even in an election year, a new Policygenius survey found.

Only 5% of survey respondents could correctly identify basic Obamacare facts, including that you can get aid to buy a plan and there was no tax penalty for forgoing coverage. Almost 44% did not believe plans sold on Healthcare.gov covered legally required benefits like pediatric care or mental health care.

“Understanding policy is really important for individual health and the decisions we make regarding our health care,” said Caitlin Donovan, spokeswoman for the National Patient Advocate Institute, which works to expand access to health care. “Everything is tied to health care. Politics connects to health care. The pandemic is health care.”

Low health care literacy has direct repercussions: One in four Americans said they avoided care because they don’t know what their health insurance plan covers. More than 8% have avoided COVID-19 testing, treatment and care because they were unsure whether it was covered.

More than one in four voters said health care was the most important factor in deciding their vote, according to a February poll by Kaiser Family Foundation, a non-partisan nonprofit that conducts health policy analysis. While that number has dropped to 10% in September, based on the same poll, health is still important to voters: around one in five say the coronavirus outbreak is the top issue.

“The reality is, a substantial portion of the population may not take the time to learn about Obamacare because they have employer-based insurance and they believe they’re immune to being uninsured,” said Jerry Kominski, professor of health policy and management at UCLA. “Then something like a pandemic or economic recession occurs and large numbers of people start losing their jobs and suddenly, you have no health benefits.”

The Affordable Care Act, better known as Obamacare, is a focal point of the 2020 election and the subject of widespread misinformation. Many Americans don’t know or understand basic facts about the law, including when open enrollment is, who can enroll and what’s covered.

Nearly nine out of ten Americans (87%) could not identify the correct timing of open enrollment for Healthcare.gov, the federal government’s health exchange website, which runs from Nov. 1 to Dec. 15 this year. Around one in three respondents were able to correctly define all three common health insurance terms: Premiums, copays and deductibles. 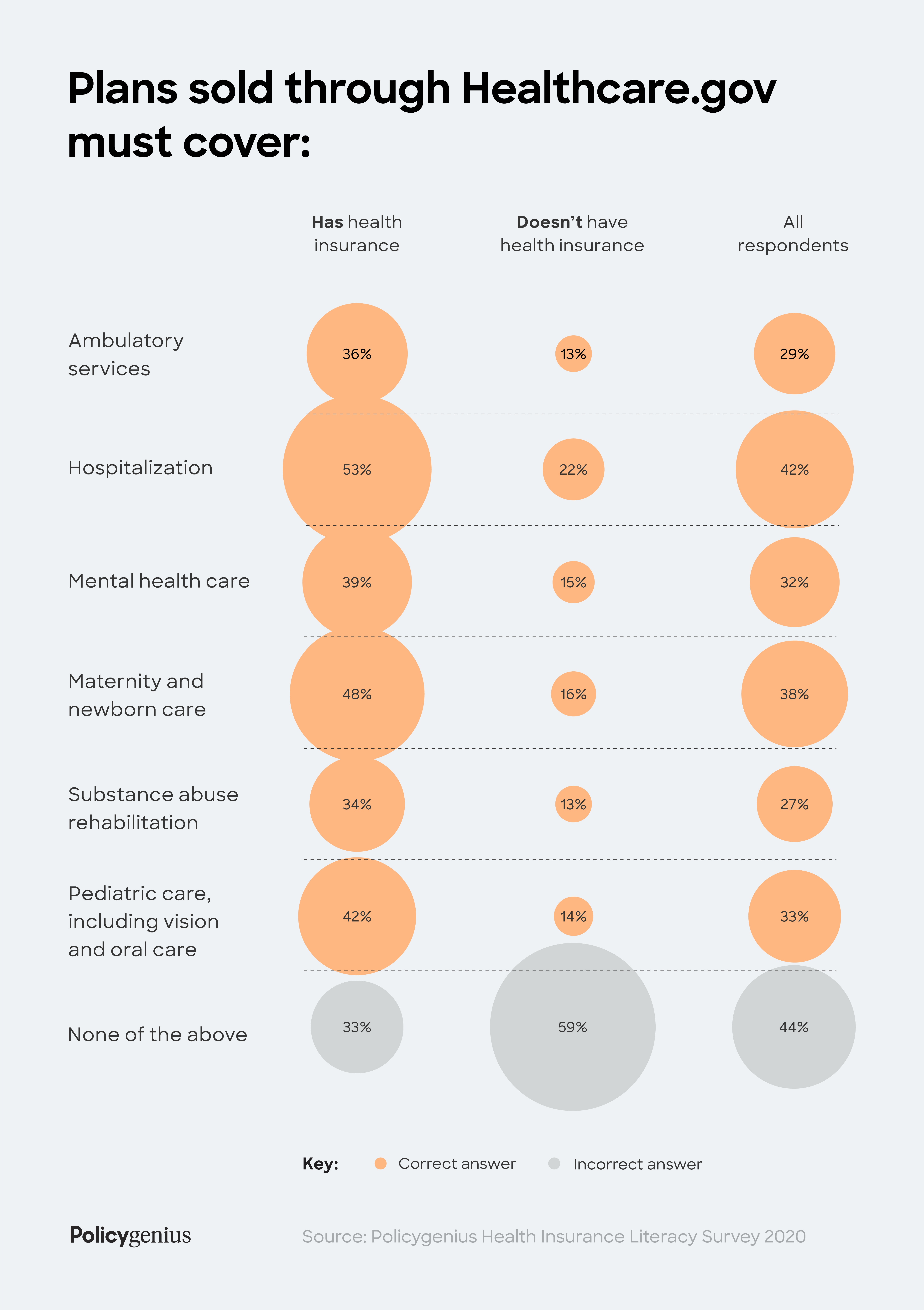 “There is so much misinformation, and some people lie about what is and isn’t covered,” said Donovan. “There’s no way the average American can keep up with what’s going on.”

About 86% of those who enroll on the federal and state health care exchanges receive a premium tax credit, but only 25% of people are aware they can get aid. The average amount of the premium tax credit in 2020 was $491.53, and premiums dropped 2% for the 2021 coverage year, according to a report released by the Trump Administration.

“People have lost faith that their coverage is meaningful,” Donovan said. “So people seek out lower premiums and higher deductibles, and don’t realize how much it could cost them in the long run.”

Enrollment in high-deductible health plans is increasing, from 20% of covered workers in 2014 to 30% of workers in 2019, according to the Kaiser Family Foundation. But those enrolled in those plans are more likely to struggle paying for medical care.

Short-term plan enrollment, touted by the Trump administration, is also growing. These plans are technically not insurance and cost less than Obamacare plans because they don’t offer some comprehensive benefits, like preventative or maternity care. Other Americans are skipping coverage altogether: The number of uninsured Americans increased by more than 2 million from 2016 to 2019, according to the Kaiser Family Foundation. Millions more likely lost their employer-based coverage due to the pandemic.

Improving your health literacy before the election — & beyond

Understanding health care can make going to the doctor, getting medication and even buying health insurance less confusing. The more you understand about your policy, the more empowered you may be to seek care if you need it, said Donovan.

If you don’t think your insurance covers a procedure or doctor’s visit, you may hold off seeking care until it’s an emergency, which can cost you money, your health or even your life, said Kominski. Low literacy is linked to more frequent emergency room visits and less frequent use of preventive care, according to a study by the National Institute of Health. It’s also linked to chronic underinsurance.

This presidential election will likely transform health care in America. So how can you improve your literacy beforehand?

“Look at the candidate’s pages, both national and local,” said Donovan. “State elections really do matter to health care. Your state election will directly affect if Medicaid is expanded, how local marketplace plans run and if certain health benefits are available.”

Kaiser Family Foundation has a helpful side-by-side comparison of the two presidential candidates and their stances on health care.

Policygenius also has a health insurance learn center that covers just about everything you need to know, including definitions of common health care terms, answers to frequently asked questions and a state-by-state guide to Obamacare plans.