For most people, a move to a new city coincides with a new job, or perhaps a major life event like marriage. But not everyone waits for one of these milestones to pack up and start over in a new place.Sometimes, you just feel stuck in your current situation and want to shake things up a bit (or, a lot). Or maybe you never quite liked your current city, you've finally had enough, and you’re looking for a change to somewhere that’s a better fit for your lifestyle, your profession and your needs.For the freelancer or self-employed professional, that means you have the freedom to call anywhere home, since you can take your work with you anywhere you live. That doesn’t mean, however, that you should just point to a spot on the map and move to any old city on a whim. You’ll want to know select the right city that fits your personal, cultural and professional needs.Consider some of these factors, to help define potential workflow and productivity in your target city: What’s the ultimate cost of living? How’s the local economy and job market doing? What about unemployment? Where can you find the biggest concentration of caffeinated creative hotspots, i.e. local cafes?

One of the most important things to consider is knowing what the average health insurance rates are in your destination city.There’s nothing worse than being uninsured and coming down with an case of carpal tunnel syndrome due to all that time on your computer researching your new target city. (Trust us, the out-of-pocket surgery cost is an instant case of debt.)So whatever the reason, the first step in your quest to move to a new city is to decide on the location. To help you with that first step, we've put together this list of places you can move to that are best suited for starting over.

What were the deciding factors?

To come up with this list, we looked at 25 mid-sized and large metropolitan areas in the U.S. and compared six characteristics:

Why carpal tunnel surgery? In addition to the average cost of monthly health insurance premiums, we’ve included average costs per city for a standard carpal tunnel surgical procedure common among several freelance professions that are focused on computer use to illustrate how expensive healthcare can be, especially for the uninsured.Using the data compiled, the better a city ranked in all six of those categories, the higher it placed on our list. 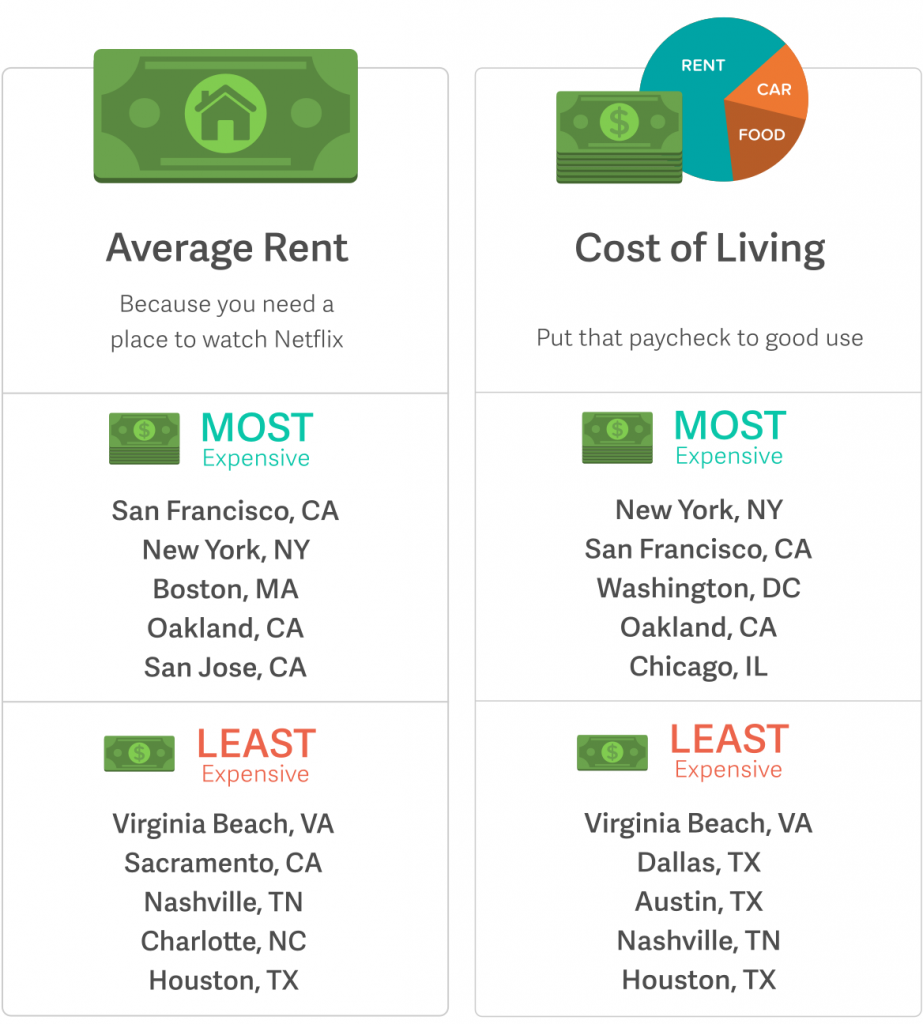 Now, if Southern California or some of the more populous regions of the country appeal to you, take into consideration the high cost of living, especially when weighed against earning potential before you make the move.According to our data sources, midway down our list of 25 cities the average rent starts to creep up to (and in some cases, well beyond) the $2,000/month mark, making them expensive cities to reside in long term, much less start over in.The bottom five cities, ranked with the most expensive rents, are places where you probably don't want to move unless you already have a job and apartment lined up in advance:

However, rent shouldn’t be the only determining factor when deciding to pull up stakes and move to a new city, since jobs with conventionally high salaries are often situated in areas with an extreme cost of living. And it’s the places outside of the major metro areas (NYC, L.A., et al), like the suburban midwest -- where cost of living is more manageable according to available salaries.A recent Forbes study went into more detail in comparing this, ranking Detroit, Cleveland and Cincinnati as cities where your dollars can stretch the furthest on the job and home fronts alike. Which cities stacked up in our data?Here are the top five affordable cities to rent for freelancers:

Cost of living, however, doesn’t always match up with rental rates, though sometimes it can. On the cost of living index, these cities average as the most affordable:

Should culture and networking play a role? 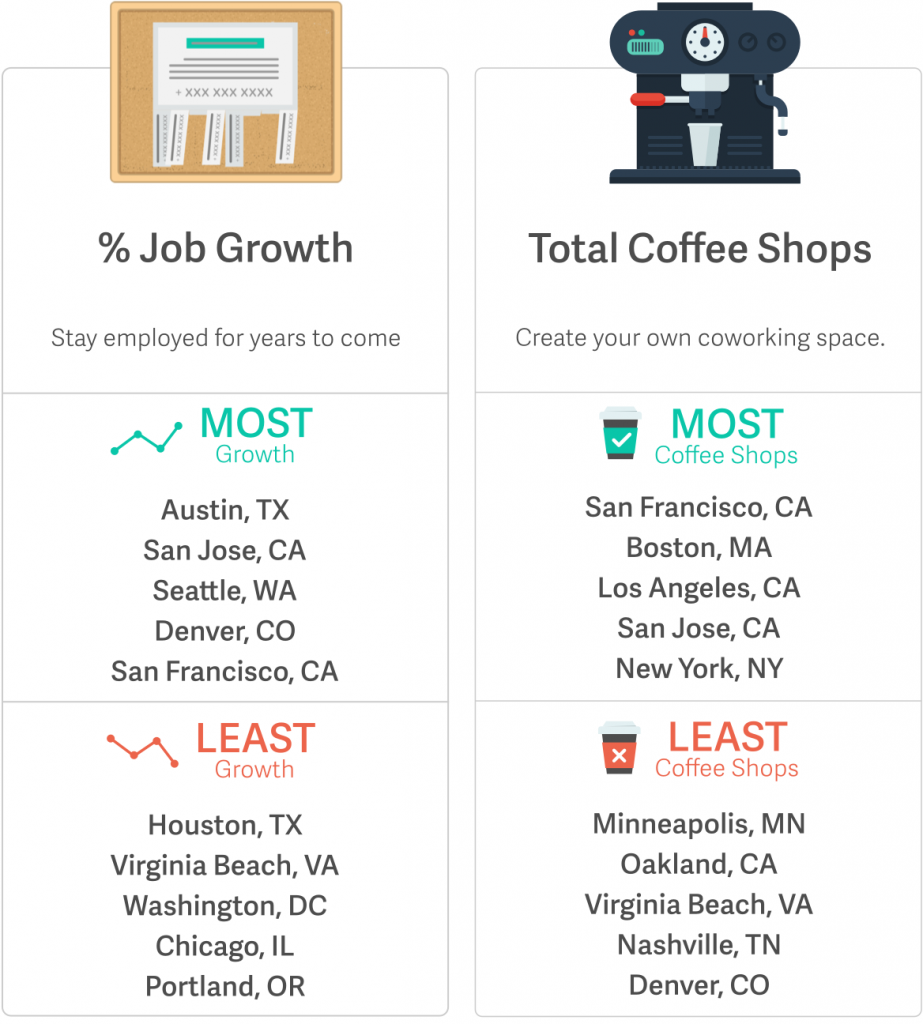 Freelancers have one serious advantage over staffers running that rat race: freelancers are mobile. You can pick up and move anywhere the work takes you (provided your earning power is enough); so what other factors should you take into consideration?It may mean picking metro areas, regions or cities where networking, cultural and even social opportunities are more abundant. We recently looked at one of the most important draws for freelancers unbound to a cubicle or desk -- cities with the highest amount of coffee shops and cafes to choose from.While Seattle, the birthplace of Starbucks, holds the mantle of king of coffee culture, where the Emerald City boasts nearly 1,700 cafes -- 253 per 100,000 residents -- other cities came out ahead per capita, according to data. Those include:

Your best bet for employment?Try Austin if you plan on entering the local job market. At 6.44%, the Texas capital city’s growing reputation as a progressive, young epicenter goes against the grain of some of the state’s conservative-leaning mores -- as such, it’s evolved into an urban hotspot for young professionals in the tech scene, not far removed from the likes of Portland, San Francisco or Seattle.Austin had the greatest increase in jobs among the top 10 cities by a good margin. Only San Jose comes close, with 6.2% growth.In fact, California boasts four out of the top 10 cities for best job growth: San Jose, San Francisco, Oakland and San Diego. 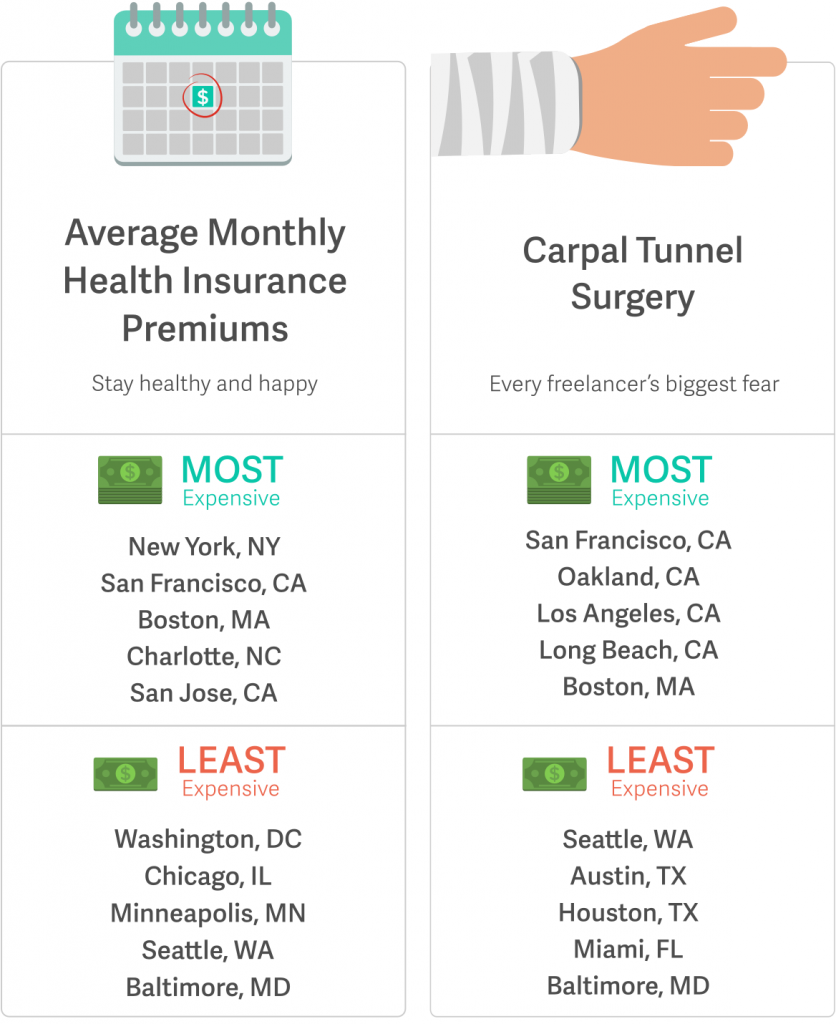 When it comes to surgical costs, carpal tunnel is nothing to flick your wrist at. The syndrome commonly associated with repetitive motion and overuse of the hands and wrists is unfortunately a common malady for even the most uncommon freelancers. And prices for surgery can be sky high even when they’re affordable (or you’re insured).

Choose your city on the specifics

Of course, our list doesn't drill down to the level of job types and doesn't factor in the average cost of buying a home, so depending on your situation you may find other cities are better suited for your needs.

There are also things like crime and transportation to consider, and you'll still want to do some additional research before making any final decisions.But if you've got a bad case of wanderlust and are thinking about putting down roots in a new city, these are some good places to start your search.SOURCES:Rental data:https://www.zumper.com/blog/2016/04/zumper-national-rent-report-april-2016/Cost of living data:http://www.numbeo.com/cost-of-living/region_rankings.jsp?title=2016-mid&region;=019http://swz.salary.com/costoflivingwizard/layoutscripts/coll_start.aspxGrowth in jobs data:http://beta.bls.govHealth insurance data:https://www.policygenius.com/health-insurance/Carpal tunnel surgery data:https://amino.com/cost/research/?topic=carpal-tunnel-surgery