The best and worst states for drivers over 65

Where does your state rank?

The U.S. population is aging rapidly — by the year 2060, the U.S. Census predicts1 that there will be 98.2 million Americans age 65 or older. That’s almost one in four U.S. residents. Already, the population of older Americans is rising, which means more older people traveling, working and shopping all across the country. And many Americans over the age of 65 are driving — in fact, reports2 suggest that seniors are driving longer, and more safely, than previous generations.

But which states in the U.S. are the best for senior drivers, and which don’t make the grade?

There are lots of good reasons that older adults would want to continue driving. Being behind the wheel of a car means independence and freedom for many Americans, and research3 has shown that when seniors give up driving they can see declines in both mental and physical health.

But there are certain costs and concerns that affect senior drivers more than the general population. Car insurance premiums, for example, tend to spike after a driver turns 65 and enters a higher-risk category. And senior drivers are likely to be particularly concerned about access to healthcare or cost of living, especially if they’re on a fixed income.

To rank the best and worst states for drivers over 65, we evaluated all 50 states by seven metrics: the total percentage of the population over 65, the average cost of car insurance in that state, the number of doctors per every 100,000 people, the rate of violent crime, the relative affordability of each state, and traffic fatality rates for both the general population and the over-65 group. 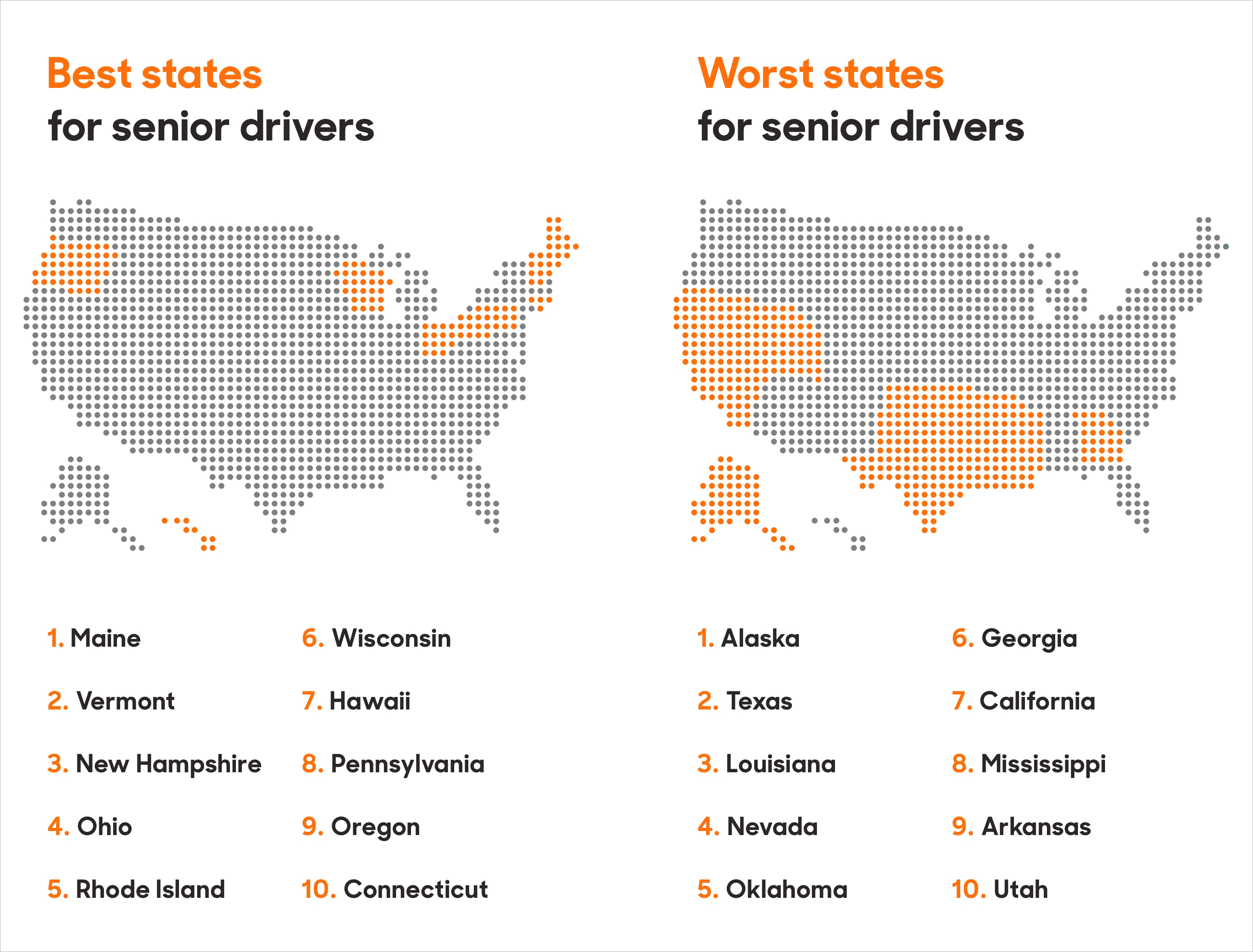 Our 2019 list of the best and worst states for drivers over 65 was carefully calculated based on seven equally weighted factors. Each metric had a point value, and totals for each state and the District of Columbia determined the rankings, with the lowest score earning the number one slot on our list. Those seven factors we used to determine our rankings were:

Each state’s final score was the sum total of its score on all seven metrics. For the District of Columbia, which wasn’t included in two of our metrics, its score was calculated based on the available data. The state with the lowest total score, Maine, earned a total of 134.49, and the state with the highest total score, Alaska, earned a total of 289.72. All other states and the District of Columbia fell on a range in between those two values. 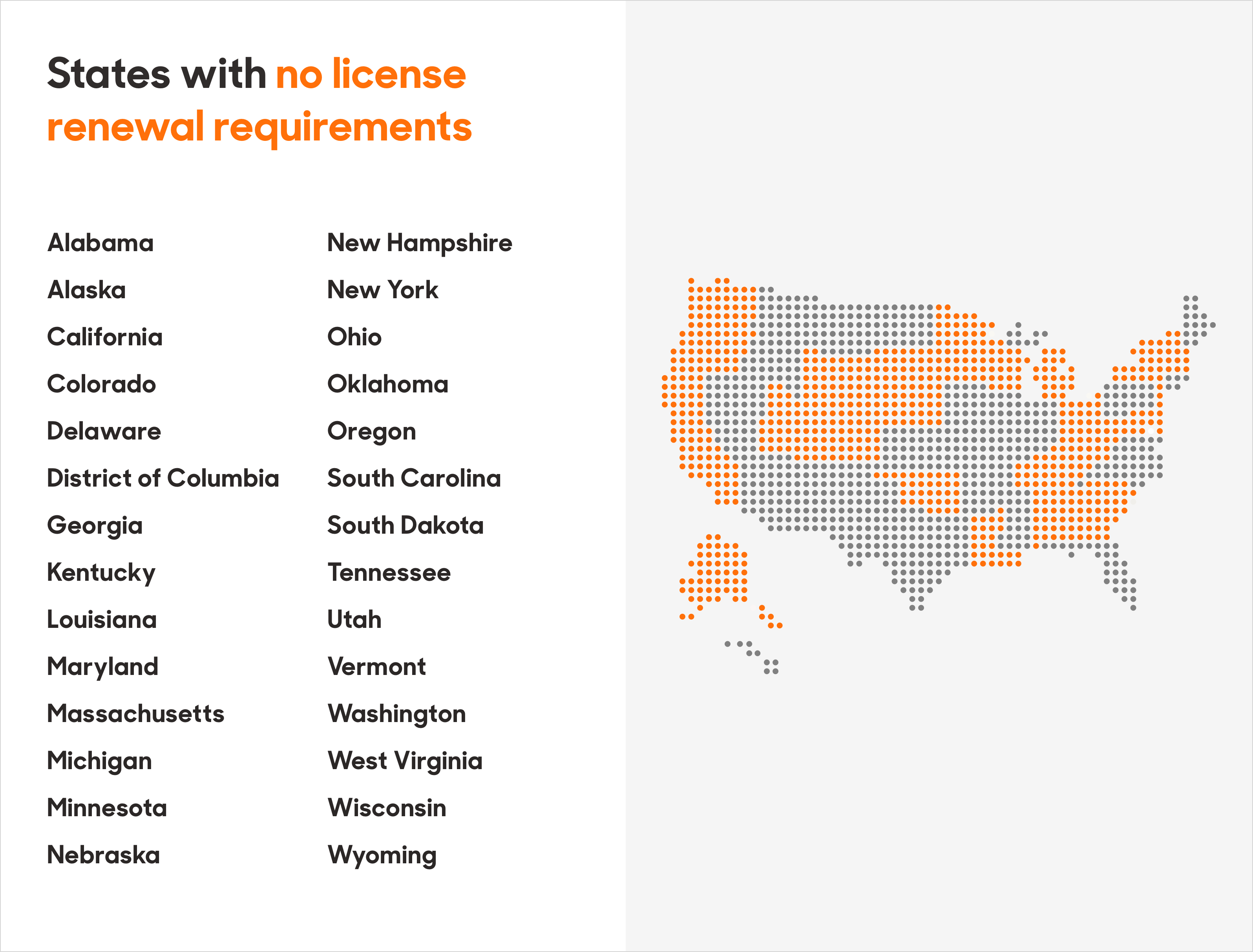 The ten best states for drivers over 65

Connecticut scored well for factors like the number of practicing doctors for every 100,000 residents, and for its low violent crime and traffic fatality rates for senior drivers. With its proximity to New York City, Connecticut is within driving distance to world-class culture without the New York City price tag — a plus for retirees who would want to jet into the big city for a Sunday theatre matinee. But Connecticut has a high cost of living, and the average annual car insurance premium in the Nutmeg State in 2015 was more than $100 higher than the national average.

If you don’t mind cloudy days, then the gorgeous Pacific Northwest might be right for you. With a low cost of living, plenty of doctors and low traffic fatality rates for senior drivers, Oregon scored ninth on our list. And the average annual car insurance premium in Oregon in 2015 was $904.83, under the national average of $1,009.38, making Oregon a great choice for senior drivers who prioritize saving money.

Pennsylvania scored well for factors like affordability and the number of practicing physicians in the state. And Pennsylvania has a high percentage of residents over the age of 65. The average annual cost of car insurance in the state in 2015 was $970.51, slightly below the national average that year. But violent crime rates in Pennsylvania were higher than most of the other states that made our top ten.

What could be better than spending your golden years in paradise? Hawaii may be a plane ride away from every other state, but it’s got warm weather tropical sun and sandy beaches. It also has low traffic fatality rates for senior drivers, plenty of doctors and a high percentage of residents over the age of 65. One of it’s biggest drawbacks, though, is a high cost of living — your dollar won’t go very far in Hawaii.

Cheeseheads rejoice! If you can handle the cold Midwestern winters, Wisconsin’s got a lot that makes it appealing for senior drivers. The average annual cost of car insurance was among the lowest in the nation — only $737.18 a year in 2015 — and with a low cost of living and a fairly high percentage of residents over the age of 65, Wisconsin is senior-driver-friendly.

This tiny coastal state ranks high on our list because of the number of active patient care doctors, its relative affordability, and the state’s extremely low traffic fatality rates for seniors. Rhode Island also has low violent crime rates, and it’s within easy driving distance to both Boston and New York City. But the average car insurance premium in Rhode Island was several hundred dollars a year higher than the national average, and since seniors already face high auto insurance rates, that could be a big drawback for the over-65 set.

Ohio ranks as one of the states in the U.S. where your dollar can stretch the farthest, and average car insurance rates in the Buckeye State in 2015 were $788.56 a year, much cheaper than in most of the country. Ohio scored well on our other factors for senior drivers too, including the high percentage of the population already over the age of 65 and the low traffic fatality rates for senior drivers.

Live free and save. New Hampshire came in third on our list, thanks to its high number of residents over 65, low cost of car insurance, high number of physicians and low traffic fatality rates, in general and for senior drivers. The cost of living may be slightly higher than in some of the other states that cracked the top ten, but this woodsy New England state has a lot going for it.

Rolling green hills, quaint New England towns, pristine forests — if you don’t mind snowy winters, Vermont is an idyllic state for senior drivers. A high percentage of the state’s population is over 65 already, and average annual car insurance premiums were $764.02 in 2015 — much lower than the national average of $1,009.38. Vermont also scored extremely well for the number of doctors compared to its population, and for its safety.

And the best state in the country for senior drivers is … Maine. There’s a reason Maine is nicknamed “Vacationland,” and, as older drivers wind along its coastal roads, they’ll be comforted knowing that Maine has some of the lowest average car insurance rates in the country. Combined with the state’s relative affordability, that means more money in your pocket (to spend on lobster rolls, of course). Maine is also has a high number of doctors for the population and the lowest violent crime rates in the country. It’s also tied with Florida for the largest percentage of the population over 65 in any state.

The ten worst states for drivers over 65

Car insurance costs are below the national average in Utah, but the state has a low ratio of doctors compared to its population, and a high rate of traffic fatalities among senior drivers, landing it near the bottom of our list.

Cost of living is low in Arkansas, which is a plus, and, at $906.34 a year in 2015, the average annual car insurance premium was lower than the national average. But Arkansas’ high traffic fatality rates, among all drivers and among drivers over 65, as well as its high violent crime rates, hurt it in our rankings.

Mississippi is one of the most affordable states in the country when it comes to general cost of living, but that didn’t quite translate to car insurance rates. In 2015, the average annual car insurance premium in Mississippi was $994.05, close to the national average. That, combined with high traffic fatality rates for drivers over 65 earned Mississippi a low spot on our list.

California may be the Golden State, but not all that glitters is gold for senior drivers. For one thing, it’s one of the most expensive states to live in, and car insurance is somewhat pricey, too. For seniors drivers on a fixed income whose first priority is living somewhere affordable, California may be a better road-trip destination than a permanent home.

Georgia may have sweet tea and peaches, but it ranked near the bottom for senior drivers because of its high traffic fatality rates and higher-than-average cost of car insurance (the average annual car insurance premium in Georgia in 2015 was $1,048.40). It ranks low for the number of practicing doctors compared to the population, too.

Oklahoma is another state where a relatively low cost of living doesn’t translate to car insurance savings — the average cost of car insurance in Oklahoma was only a few dollars off the national average, and traffic fatality rates for drivers of all ages were higher than most other states.

Plenty of seniors choose to take a gamble on Nevada thanks to its dry, warm weather, but Nevada scored low on our rankings due to its high average cost of car insurance, high violent crime rates and low number of physicians for its population.

Everything is bigger in Texas, including average car insurance premiums. Pricey car insurance helped land Texas at the bottom of our list, and so did the relative youthfulness of the state — it scored low for the percent of the population over 65.

Alaska's got natural beauty galore, but long, cold winters already make it a less likely retirement destination for senior drivers. It’s also an expensive place to live — many goods cost more in Alaska than in most other states. Combine that with a high average cost of car insurance and high traffic fatality rates for drivers over 65, it’s not surprising that Alaska landed at the bottom of our list.

*We evaluated the District of Columbia based on the available data, which did not include violent crime rates or the number of active patient care physicians per 100,000 people.

3. The Journal of the American Geriatrics Society↩

Anna Swartz is a Deputy Managing Editor at Policygenius in New York City, and an expert in auto insurance. Previously, she was a senior staff writer at Mic, writing about news and culture. Her work has appeared in The Dodo, AOL, HuffPost, Salon and Heeb.