How your dog's nose works When I walk my dog Henry, I try my hardest not to rush him. Walks are his thing – his time to explore the world and find out what’s happening around him. And while I do try to respect his time outside, if it’s cold or raining or I’m in the middle of an episode of Real Housewives of Potomac, I want in and out quickly. But what do my selfish desires prevent him from experiencing? When I rush back inside after walking him, what do I interrupt for him and his life as a dog?

If your dog stops to smell a tree or a car or another dog or a spot in the grass, she’s not doing it to annoy you — she’s doing it to better understand her surroundings. In fact, according to Modern Farmer, dogs smell differently than humans, and it all begins with how they sniff. "Where humans take long inhales and exhales through one pathway, dogs inhale and exhale about five times per second and have separate olfactory and respiratory routes in their noses."

While the front part of a dog's nose is almost entirely committed to respiration, the rest is committed to olfaction – the sense of smell – and since there are hundreds of millions more olfactory receptors in a dog’s nose compared to a human’s nose, a dog is able to smell more and detect a scent in much smaller quantities: "This means two things: A dog definitely experiences smells, odors — volatile molecules — that we don’t," Alexandra Horowitz, assistant professor at Barnard College and author of Inside of a Dog, told Modern Farmer. "And threshold for smelling is much lower."

Dogs even have a unique system for breathing out: dogs can exhale through a couple of slits in their noses instead of their nostrils, allowing smells to stay in their noses longer and allowing them to track scents for up to 130 miles.

"In addition to the sensory cells and sinus structures that allow them to process odors in the air, they also have an organ we do not have," says Brian Ogle, a science instructor specializing in zoos, aquariums, animal shelters, human-wildlife contact, and pet/animal ownership at Beacon College in Leesburg, FL. "This organ is called a Jacobson’s organ, which helps to analyze different chemicals in the air that we cannot detect. For example, a male dog can use this organ to analyze pheromones from a female to define her reproductive status. Beyond the nose, the dog’s brain is equipped to handle the extra processing required to interpret these chemicals/odors in the air around them. This portion of the brain is much larger in comparison to our own brain."

You can think of dogs as having two noses – the 300 million olfactory receptors and their Jacobson’s organ – and this Synaptic Smelling System (my phrase, trademark pending) allows trained dogs to detect odors called volatile organic compounds. You have smelled these organic compounds if you’ve ever smelled roadkill because as a cadaver decomposes, it releases a large variety of volatile chemicals. Although you can’t see them, they form a plume that gets dispersed in the air. When we breathe, those chemicals are delivered to olfactory receptors that are found within the nose, and since dogs have over a thousand times more receptors than us, they experience odors quicker and stronger than us: "Dogs trained for scent detection also have long noses that very efficiently deliver air to these olfactory neurons. This allows them to detect trace amounts of chemicals in the air that will go undetected by us."

For example, MSA Security in Hartford, Connecticut trains explosive detection canines (also called bomb dogs) to not just smell the bomb, but to deconstruct an odor into its components. "MSA’s dogs begin building their vocabulary of suspicious odors working with rows of more than 100 identical cans laid out in a grid. Ingredients from the basic chemical families of explosives—such as powders, commercial dynamite, TNT, water gel and RDX, a component of the plastic explosives C4 and Semtex—are placed in random cans." After they start smelling and learning the various components that make a bomb, they are trained through repetition to remember them and start picking out the scents as they work along the rows.

To explain in super simple terms: when we smell a pie, we know what kind of pie it is — whether it’s apple or pumpkin, for example — but dogs’ noses allow them to break it down into specific ingredients like flour, milk, eggs, or sugar that went into making that pie.

OK, OK, so dogs have some pretty powerful schnozes, but what else makes them so unique? What else does a dog’s nose do and know?

You know the character Pigpen from Peanuts? To your dog, you’re just like him, shedding skin flakes with every step you take and walking around in a cloud of dirt. You stink – your breath is weird, your armpits smell, and your skin constantly reeks of sweat. But he still loves you for it – your smell is your signature odor and it’s everything he needs to know to distinguish you from another.

While dogs’ strong sense of smell has been put to work in military and law enforcement fields (like bomb and cadaver detection), the medical field has seen the most exciting developments, including researchers who trained five dogs to smell breast and lung cancer on a patient’s breath. With that study, highly-trained dogs were able to detect cancer with 88-99 percent accuracy while another study found dogs could detect prostate cancer in urine with 98 percent accuracy. Pretty impressive, huh? However, don’t cancel your annual physicals just yet. While the studies are promising, there is still a lot of work to be done and doctors and machines are still the most sound detection options.

Why do dogs smell each other's butts?

Can humans help their dogs improve their sense of smell?

Science instructor Brian Ogle says yes and no. Since sense of smell is determined by constructed anatomy of the animal, while you can train your dog to recognize certain scents, you cannot train them to increase their physical ability to smell or process the smell. Training, like seen in drug-sniffing or cadaver-finding dogs, is done for the animal to demonstrate a reaction to a familiar scent.

Horowitz, author of Inside of a Dog, says dogs can detect a teaspoon of sugar in a million gallons of water. In her book, she wrote: "That dog nose, in most breeds, is anything but subtle. The snout holding the nose projects forth to examine a new person seconds before the dog himself arrives on the scene. And the sniffer is not just an ornament atop the muzzle; it is the leading, moist headliner. What its prominence suggests, and what all science confirms, is that the dog is a creature of the nose." 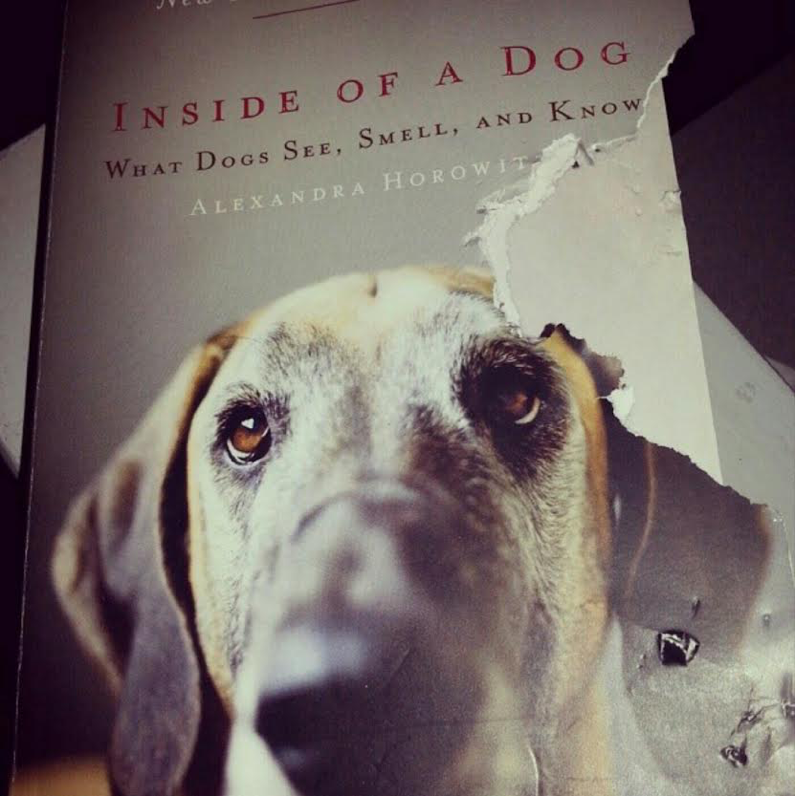 Now that you know more about your dog’s nose and what she can do with it, next time you take your pup for a walk, let her sniff around and enjoy herself. When I walk Henry, it’s so fascinating to watch him sniff a blade of grass or a telephone pole; I always wonder what or who he smells and what he could recount to me if he could talk.Image: Doug Zwick