You Need A Budget could change your life UPDATE: In the last hours of 2015, You Need A Budget released an updated version of their program, which I have reviewed here. If you're looking at YNAB as a new user, I suggest reading both articles to get an understanding of what YNAB is and why it's different from other budgeting solutions out there.

It’s really hard to review You Need A Budget. On one hand, it’s just a piece of budgeting software, available on pretty much all of your devices for a flat fee of $60. But on the other hand, it’s an entire mindset, a way of living, and, possibly, a drastic disruption of your habits.

You Need A Budget, referred to affectionately as YNAB (why-nab) by its fans, has inspired an entire community around using it. There’s a blog and podcast run by the company, as well as an entire curriculum of online classes taught by five different teachers.

Getting on board with You Need A Budget

Thanks in large part to the rumblings I’ve heard on the internet, YNAB has been in the back of my head for a long time. When I did my money management app round-up last fall, YNAB was on it, though at the time I was dismissive. It was just a spreadsheet. It didn’t connect to any bank accounts. It looked like a lot of work.

All of those reasons why I initially dismissed YNAB are still true. The software itself is not going to blow you away. It really is just a series of spreadsheets. It’s easier to use than an Excel document or a Google Sheet, but it hardly looks like it’s worth $60. 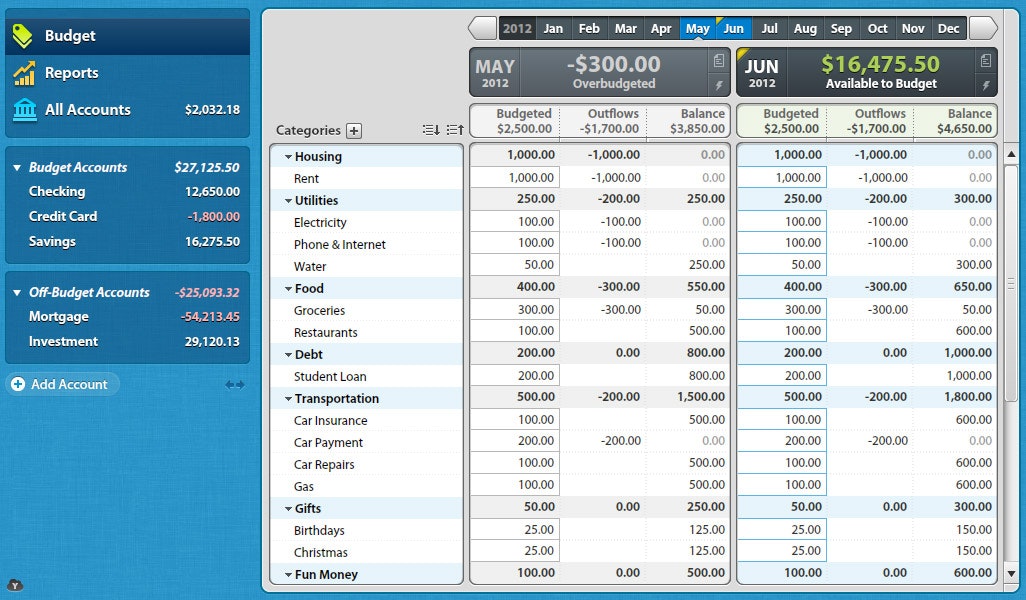 I can only assume that the YNAB team knows this because they give everyone a generous 34 day free trial. That’s enough time not only to use it for an entire month, but to get started on the next month, too, with the hope being that once you get settled, you’ll pay up to keep using it.

Actually using YNAB is easy; anyone with a passing knowledge of computers should be able to do it. You need to download it to your desktop computer first—the mobile apps won't work unless you have the desktop version.

When you fire up the program for the first time, YNAB will ask you to create budget. You don’t need to wait until the first of the month to do this. YNAB doesn’t care about your transactions before you start using the program.

After your budget is created, you need to go through and manually enter your accounts. This is where YNAB differs from automated solutions like Mint.com. Instead of connecting to your accounts over the internet, YNAB requires that you manually enter every transaction–not unlike a checkbook.

For anyone coming from using Mint.com or any other app that connects to your accounts, this probably sounds insane. But it actually works to your advantage. With Mint, you are always reacting to your spending habits. Mint will tell you when you’ve spent too much, but it’s not good at helping you proactively think about your money.

YNAB works by implementing a zero based budget. Zero based budgeting is a simple idea: at the beginning of every month, you make sure every dollar is accounted for. What does this mean? In YNAB’s terms, you’re "giving every dollar a job." This idea isn’t new–Jimmy Carter tried to make the government do this back in the ‘70s–but YNAB streamlines the process and gives it a facelift.

After creating your accounts and putting in your current balances, you get a nice big green number at the top of this month’s budget. That lets you know that there is money available to budget. From there, you need to ask yourself, in the words of YNAB: "What does this money need to do before I’m paid again?"The wording of that question reveals YNAB’s focus: your money should be working for you, not the other way around.

You Need A Budget’s Method

The team behind YNAB don’t see themselves as software developers. How can I say this with certainty? They say it themselves in big letters on their Method page: "It’s Not Just Software. It’s a Mission."

YNAB, the software, is just the tool that helps facilitate YNAB’s method. Around the software, YNAB, the company, have created a blog, a podcast, and an online classroom. All of these are focused around YNAB’s "Four Rules": 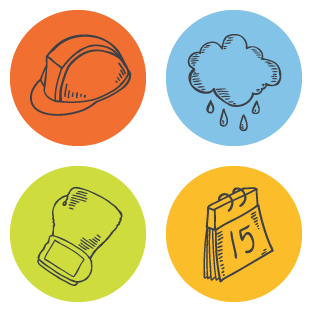 Rule One: Give every dollar a job.Rule Two: Save for a rainy day.Rule Three: Roll with the punches.Rule Four: Live on last month’s income.

These rules dictate the experience of using YNAB’s software. A great example is Rule One–everything in the software is built around giving your money a job. After that, the rules act as goals and milestones, with the software giving you pushes and nudges in certain directions.

For the most part, YNAB is pretty malleable. You can easily customize your budget to fit your needs, and even though you’re giving every dollar a job at the beginning of the month, you can edit your budget at any time if an unexpected cost comes up. (In fact, that’s Rule Three: Roll with the punches.)

But certain design choices nudge users to create budgets that follow the Rules. YNAB’s categories automatically carry extra money over into the next month, letting users easily set aside small amounts to save towards larger goals. You can do the same for debts, too. When you overspend in a category, you have two options. You can have that debt either subtracted from next month’s Available to Spend, or you can subtract it from next month’s category balance.

What’s the difference? Subtract it from next month’s Available to Spend, and you’re making up all of that overspending with next month’s paycheck. If you allow it to subtract from the category balance instead, that debt will be contained to just that category, allowing you to pay off that overspending over time. By default, YNAB will set it to subtract from next month’s Available to Spend. Want to switch to category balance instead? YNAB will warn you about the potential consequences of letting a debt sit for too long, and urge you to instead pay it off next month. It won’t stop you from carrying a balance, since sometimes you don’t have a choice, but it will do its best to educate you about the choice you’re making.

YNAB also really, really wants you to take one of their free online classes. When you’re still in the free trial, YNAB will show a message encouraging you to sign up for their free "Getting Started with YNAB" online class. They hold two of these classes every day, and also promise that one person from every class will win a free copy of YNAB. While I don’t know the statistics, I can only assume that the YNAB team feels confident that after taking the intro class, the majority of people will buy YNAB (at least confident enough to take a $60 hit on every class, not even factoring in other costs).

"Getting Started with YNAB" isn’t YNAB’s only class–there’s "Budget Workshop," "Handling Credit Cards," "Reconciliation and Importing," and "Dealing with Different Pay Cycles." All of these classes are designed with more complex use cases in mind. You don’t need to take all of them to understand YNAB, but they’re all available just in case. These classes exist to help people who are struggling to handle credit card debt, student loan debt, and other complex financial needs use YNAB to get back on track. The best part? All of them are free, even if you don’t own the software.

YNAB also has video tutorials, dozens of support articles, and support forums that feature answers to just about any question you could have about the software and the method. The YNAB blog and podcast give small, bite-sized amounts of budget advice and YNAB tips. For users who are already committed to YNAB, these blog posts and podcasts can provide a drip feed of personal finance knowledge. If you don’t want to join YNAB’s official forum, there’s also a subreddit dedicated to YNAB and many Facebook groups. All of YNAB’s official and unofficial support systems are also free to users.

What’s bad about You Need A Budget

I really like You Need A Budget. The software is easy to use. However, I do have a few nitpicky things I wish they would fix. 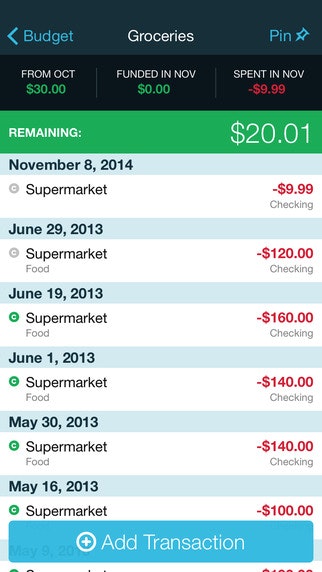 My biggest complaint is that the iPhone app is severely limited. It’s designed only to let you see the balances left in your categories and to let you add transactions on the go. It does not let you edit your budget or see next month’s budget. It’s an understandable limitation–the YNAB team doesn’t want you to obsess over your budget while you’re out at lunch or on the subway–but I still really want to be able to edit my budget on the go.

This limitation doesn’t exist in the iPad app, which is closer to a full-featured, touch-enabled version of the desktop app.

It also seems weird to me that you can’t buy a license just for the mobile apps. It’s nice to get the mobile apps for free when you buy the desktop version, but why isn’t there any option for people who just own a smartphone or a tablet? If the YNAB team truly wants to bring its budgeting solution to everyone, they’ll have to find a way to make their mobile apps full-featured pieces of software and figure out a new monetization strategy.

While I haven’t had any technical problems with YNAB and their Dropbox-powered Cloud Sync feature, which allows users to sync their budget between the desktop and mobile apps, I have seen multiple complaints of Cloud Sync not working in the YNAB Facebook group that I am a member of.

Will You Need A Budget work for you?

There are a lot of apps out there that want to help you manage your money. Usually, I would say to try out some and see what works best for you. But I also think that YNAB can fit anyone’s budget; even though YNAB is getting you to fit into their method, their method is flexible enough to fit anyone’s habits and financial situation.

I asked people in the YNAB Facebook group if they had any issues when they started using YNAB. Very few people had issues with it technically; the apps are easy to use and YNAB support is helpful.

The biggest issue people had was mental, especially if they were coming from using no budget. Some had a problem with overspending and looking at the account balance instead of the category balance. Others had to restart after not following their budget. Some suggested taking YNAB’s classes before making your first budget; understanding the YNAB method before using the software will help reduce the risk of failure.

So while I think that YNAB can work for everyone, it will require that you take an active interest in making it work for you. Using YNAB means committing to a certain mindset and a way of dealing with your money. If you’re not willing to commit to it, YNAB will not work for you.

Note: We are not affiliated with You Need A Budget and do not receive commissions if you buy YNAB through any of the links above.