When startup founders want to quit — & why they shouldn't

The road to a large and successful company is hard, as HBO's Silicon Valley shows us (with shocking-if-hilarious accuracy). Along the way you'll find a lot of reasons to pack it all in and go back to a suit-and-cubicle world.But founders who find some insight and even a little humor in the bumps in the road are the ones who might survive to tell the tale. Here are the three rough patches every startup founder faces that make them feel like calling it quits.

Every startup founder wants to disrupt an industry. That's led to a "go big or go home" mentality where you aim higher and higher with bigger and bigger plans.

Then you get to pitch this big idea - this thing you've put so much time into with the prospect of turning the establishment on its head - to investors, and you get a firm, "No."

If you're a pessimist, that can get you down. If you're a glass-half-full type of person, you'll be happy to know that you shouldn't take it personally, because you'll get a lot more "Nos" before you get your first "Yes."

To be clear: Raising capital is a pain. It's a slog to go into boardroom after boardroom, get excited, make your pitch, and be rejected, especially the first time you do it when you're relying more on projections and visions than actual results. You're having to sell your business long before you'll do so to customers.

That's assuming you can get your foot in the door to make your pitch at all.

Whatever you do, don't lose perspective about what's at stake: the future of your company.

When my co-founder and I were starting to raise money for Policygenius, we couldn't get investors to punch us in the face, never mind invest in us. That slowly changed after we established ourselves and were able to raise a successful Series B round of funding, but it took a lot of grit and rejection, along with some promising business growth, to get there.

When the wheels fall off the bus

So if pitching your product to investors is the hard part, actually bringing it to market must be easy, right?

Of course not, because every part of running a startup is "the hard part" and your product's first contact with the market comes with its own set of unique challenges.

When you release your product, which has been carefully tested in relatively controlled environments, into the wild, there can be unexpected results. Your site will crash and you'll lose consumers' already-short attention; in a classic case of a humblebrag, your operations team can't manage the volume that comes and you leave a lot of revenue on the table; you end up with lots of negative feedback, which can be a death sentence in a world where customers make purchasing decisions one review star at a time.

Murphy's Law states that "Anything that can go wrong will go wrong." Launching your product pretty much feels like you can substitute "Murphy" with your company's name.

You might find yourself scrambling to put out fires, and that's fine. If you released your product and didn't encounter any issues, it's either perfect (which, let's be honest, isn't the case) or you didn't push the envelope far enough to really battle-test it. I've spoken to numerous founders and every single one of them has a "wheels falling off the bus" story early on in their company's life. So the question is: can you as a business leader move a 3-wheeled bus and fix it at the same time?

Deep in the Trough of Sorrow

Calling something the "Trough of Sorrow" doesn't leave much to the imagination, does it? And make no mistake, it lives up to its name. 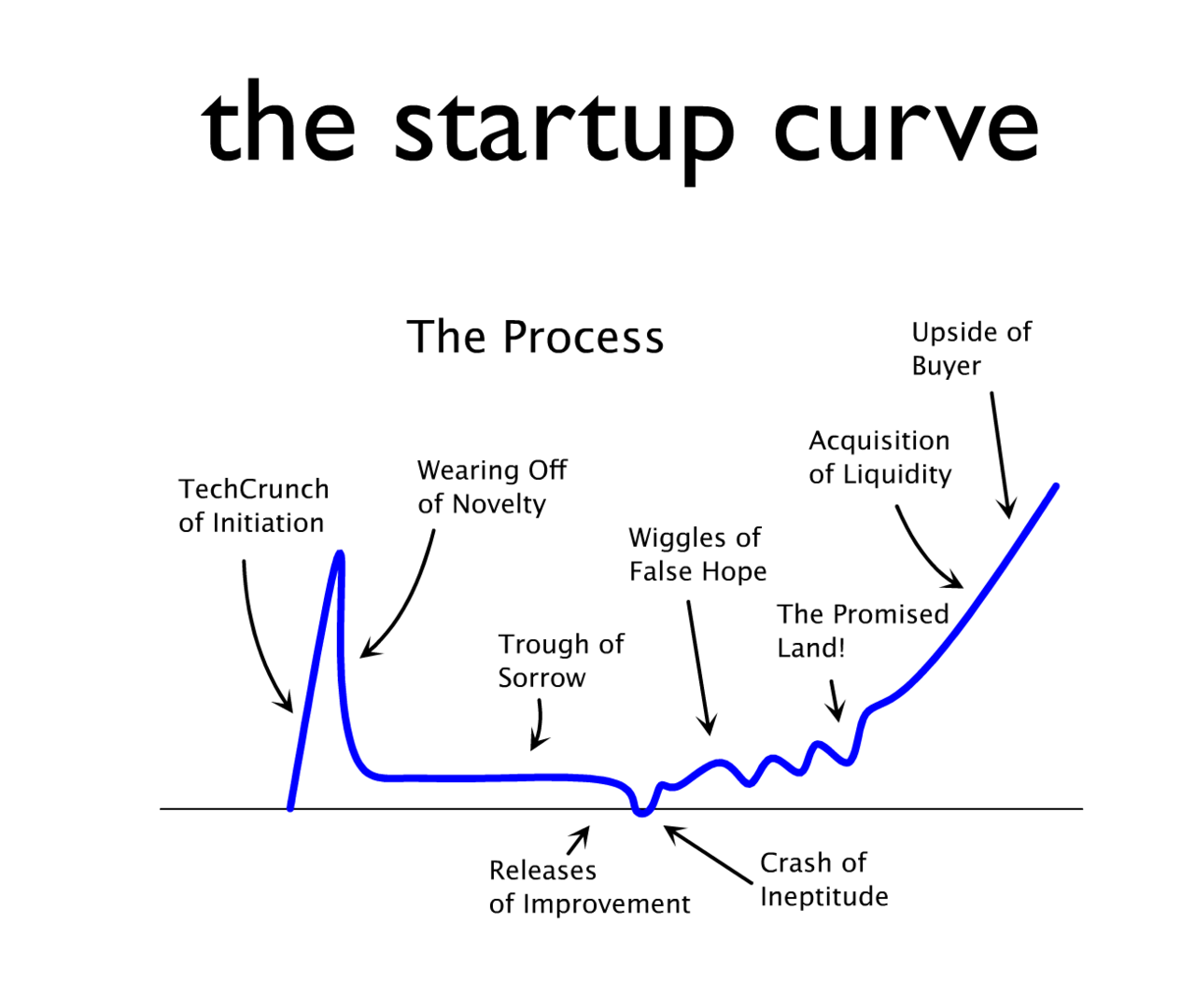 Take a quick look at the Trough of Sorrow, a phrase coined by Y-Combinator's Paul Graham, in the chart, and you can see how it goes. You launch your company into the world, get some good press in a publication like TechCrunch or TheNextWeb or FastCompany, and things are looking good. Then the initial press halo fades and you need to figure out what to do next to actually grow this business.

There's a saying in sports that "winning solves everything." When a team is losing, every headline is about how a superstar player resents his supporting cast, how the front office doesn't agree with anything the head coach is doing, why isn't X working, why aren't they trying Y, and so on. But when a team starts winning, all of that goes away even if none of the underlying problems have been solved.

The same is true in a startup. When you're in the exciting phase of strategizing and building and promoting, and the numbers keep ticking up, everything is good. But inevitably you'll hit the Trough of Sorrow. Channels dry up. The needle stops moving (or moves in the wrong direction). Your candidate pipeline feels like a clown show on loop. You lose a big contract that you spent months nurturing. An important employee quits. And chances are, all of this might happen at the same time.

So you'll probably think about quitting.

There's no telling when - or if - you'll climb out of the Trough of Sorrow. You'll need to make your own decision about whether or not it's worth seeing things through and trying to create something viable to make it to that Promised Land. The AirBnB founding team has a classic story about how they pushed through the Trough of Sorrow. But make no mistake about it: you will eventually face the Trough of Sorrow, and it takes luck, grit, and smart decisions to fight your way out.

I'll leave you with one last saying: nothing worth having comes easy. Is there anything more satisfying than seeing your business get off the ground and become a success? Maybe having a child, but in its own way your startup is like your child. Except it'll hopefully make you money instead of costing you $250,000 until it goes to college.

Policygenius is my child, and I don't expect it to get any easier; just like children grow from temper tantrum-filled children to moody teenagers, different problems will continue to pop up. But it wasn't too long ago that Policygenius was a five person team working in a three person office. Over the past two years, my cofounder and I have built it into a growing company with 20% month-over-month growth and more than $21 million in funding in spite of - or even because of - the moments where I wanted to quit.

It's hard, and having a roadmap from entrepreneurs who have gone through it before certainly won't allow you to avoid every speed bump. But at least you'll be able to see them coming. When you do, you'll know to brace yourself, course-correct, and prepare for the next one.