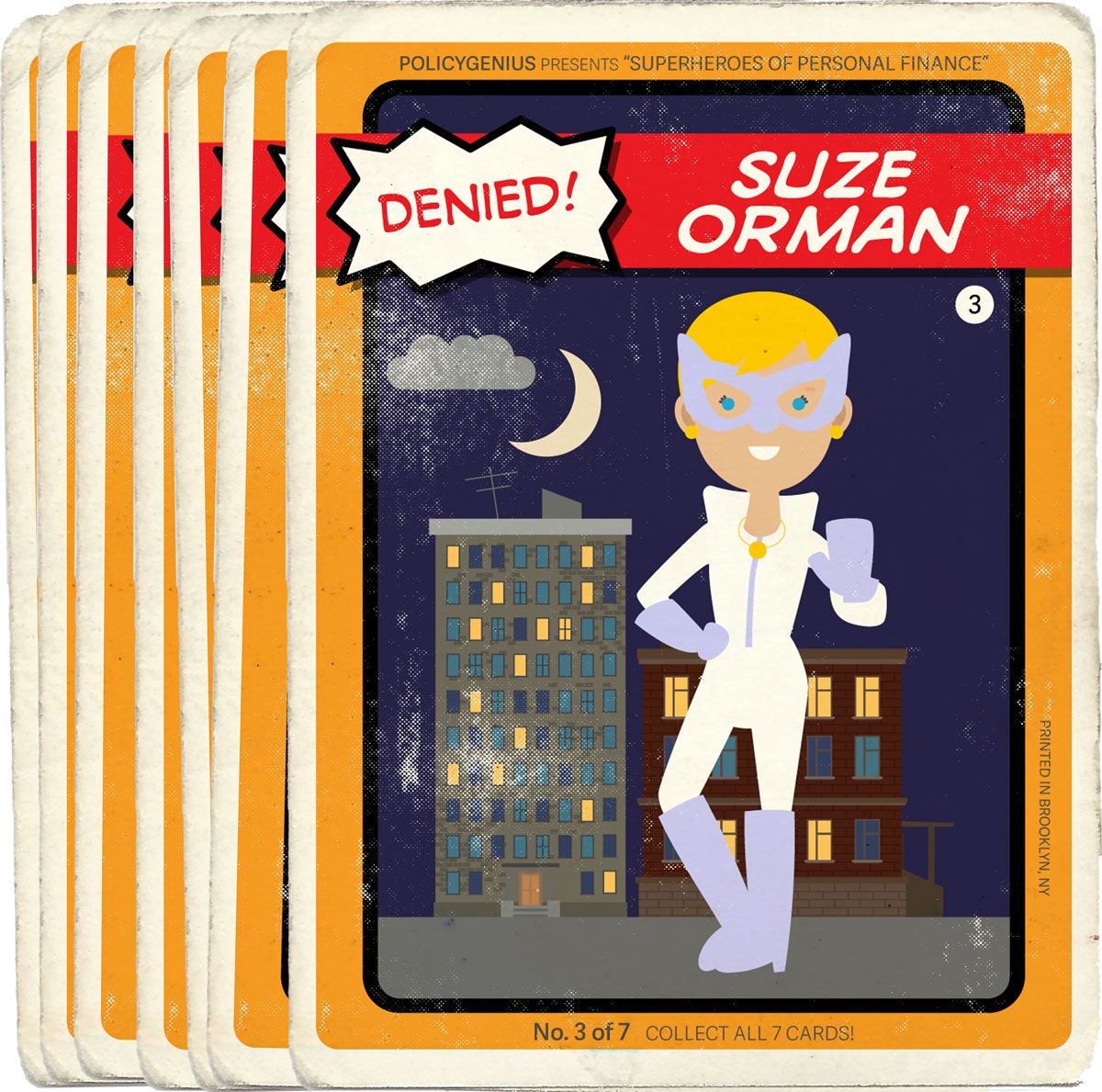 To say that Suze Orman has had a colorful life shouldn’t be much a surprise to anyone who’s seen her TV show. Suze, who refers to just about everyone on her show as either "girlfriend" or "boyfriend," is well known for her personality, which seems almost too big to fit in her body — her huge grin and loud jackets are just two examples of her personality come to life.And while it may seem like Orman, who now has an estimated net worth of over $30 million, was always on the road to success, she actually drifted until her late twenties. In elementary school, Orman "always felt secretly dumb," and was once put in the back row of a classroom when a teacher drew up a seating chart based on reading scores. When she eventually got to college (despite her low SAT scores), she told her guidance counselor that she wanted to be a brain surgeon. His response? "I don’t think so."I can only imagine that her college years were eventful — one of her roommates was Judy Jacklin, who was dating a guy named John Belushi. (Belushi, as you might recall, eventually went on to star in Animal House.) But Orman didn’t graduate college, at least the first time around, due to her failure to complete the foreign language requirement. Instead, she borrowed $1,500 from her brother to buy a van and travel the country. She converted the back into a bed and drove until she hit Berkeley, California.

In Berkeley, she picked up a job clearing dead trees for $3.50 an hour. Two months later, when the trees were cleared, she applied for and got a job at Buttercup Bakery, where she stayed as a waitress for six years. During that time, she finished her college degree while making about $400 per month. At the age of 29, however, Orman decided that she wanted to start her own restaurant. She asked her parents for a $20,000 loan and then immediately regretted it — there was no way her parents could give her $20,000, even though they desperately wanted to help her.The next day, a regular customer, Fred Hasbrook, noticed that Orman wasn’t acting like herself. After getting the full story, Hasbrook talked to other customers there and, before he left, presented Orman with a check for $2,000 and checks and commitments from other regular customers that added up to $50,000. He also wrote her a note: "This is for people like you, so that your dreams can come true. To be paid back in ten years, if you can, with no interest."Hasbrook told Orman to take these checks and put them in a money market account at Merrill Lynch. Unfortunately for Orman, her broker, Randy, didn’t listen to her needs. Orman needed her money to grow, but more than that, she needed it to stay safe. She couldn’t afford to risk her initial $50,000 investment. Randy got her involved in speculative investing strategies, mainly buying options. It went well at first, and then didn’t. Within three months, she’d lost all the money in the account. She owed people over $50,000 and still only made $400 per month.Of course, there’s a silver lining to this story: after Hasbrook introduced her to money market accounts, Orman became obsessed with learning as much as possible about the markets. From her official life story: "I watched Wall Street Week on PBS every Friday night, I read Barron’s and the Wall Street Journal. I taped pages with the stock and option prices to my bedroom walls." Armed with her knowledge and a pair of white cowboy boots, Orman marched into the same Merrill Lynch office that lost her $50,000 and interviewed to become a stockbroker.

Despite the fact that the men in her office believed she wouldn’t make it a week, she not only stayed for years (only leaving when she became VP of investments at Prudential Bache Securities), but she sued Merrill Lynch while she worked for them! Why’d she sue them? Because she knew Randy was a crook — while studying for her broker’s licensing test, she found out that brokers weren’t allowed to risk a customer’s money if they couldn’t afford to lose it. Randy had broken that rule with her, and Merrill Lynch knew it. They ended up settling out of court.Orman worked at Prudential until 1987, when she resigned and founded the Suze Orman Financial Group, a financial planning company, which she directed for ten years. At this point, she took a path towards stardom: she wrote books (ten published since 1995) and started her own show on CNBC (with help from Oprah Winfrey). While The Suze Orman Show ended last year, she’s developing a new series, Suze Orman’s Money Wars, which will start airing in fall 2016.

As a huge personal finance guru, Suze Orman has come under a lot of fire for her various pieces of advice and her opinions. The biggest criticism is that her advice can be simplistic and generalized. You can argue that because she’s primarily an entertainer giving basic financial advisor to millions of people, duh, of course it’s simplistic and generalized. But because of her no nonsense attitude, it comes off more like "If you don’t take this advice, no matter what your situation, you’re doing something wrong," which is not always the case!Take everything that Suze Orman says with a grain of salt and remember that while her personality is entertaining, her advice may not fit your situation. If you have questions, do your research or talk to a financial advisor who understands your specific needs.

Suze Orman has two big pieces of advice that she stresses repeatedly: do not spend money you don’t have and invest your money. Seems simple, right? But as Orman’s "Can I Afford It?" section has proven time and time again, while people may know that they shouldn’t spend money they don’t have, they don’t necessarily know when they don’t have money. And don’t even get us started on investing — while most people know they should invest, they have no idea where to start.That’s where Suze Orman comes in. While her advice is pretty general, she gives people a pretty good overview of what they should be doing to prepare for retirement and how to get their monthly budgets in order. Her books and kits stress this, too, by giving people the tools necessary to create actionable monthly budgets on their own.

If you can name a financial topic, Suze Orman has tackled it. Again, just take a look at her resources page: twenty-two categories! Over a hundred topics!One of her main topics is helping people manage debt, which includes paying down credit card debt, education loans, and car leases. She also helps with debt settlement, one way to get rid of credit card debt.She also cares a lot about retirement — saving enough, investing correctly, and controlling how much you’re spending once you get there. No matter what age you are or whether you’re a Millennial or a Boomer, she has retirement advice for you.

Suze Orman was the host of The Suze Orman Show (of course), and while it’s no longer on the air, you can still watch videos of old shows and clips on the CNBC website. There are a lot of "Can I Afford It?" segments, so if you’re a fan of Orman saying "Denied!" in funny ways, you’re in for a treat. For the most part, I wouldn’t bother trying to find clips on YouTube — most of them are low quality or used as part of a larger video compilation.This fall, you’ll be able to find Suze Orman on her new, Money Wars. Keep an eye on your TV guides!You can find Orman’s advice in her ten books, all of which help give you the tools to change your financial life. Her 2005 book, The Money Book for the Young, Fabulous & Broke, is designed for young people graduating college with a huge amount of student loan debt. Seems amazing that the problems twenty-year-olds faced in 2005 are still affecting newly graduated twenty-somethings in 2016, huh?But no matter how old you are, you can get a wealth of financial knowledge from her 1999 classic, The 9 Steps to Financial Freedom. It acts as both a useful resource and an inspirational pep-talk — you don’t need to feel guilty about money, and Orman’s straight talk will snap you out of funk that’s getting in the way of growing your wealth.You can also find blog posts on her website, updated approximately weekly, on a variety of topics, including real estate, credit unions, taxes, and more.