We knew the Affordable Care Act dropped the number of uninsured in the United States.

The Census Bureau on Tuesday drove the point home further with its report on health insurance coverage in 2016, which showed that the number of uninsured went from 41.8 million in 2013 to 28.1 million in 2016, a drop of 13.7 million.

California was one of 31 states to expand its Medicaid coverage to cover people with household incomes below a certain level. States that rejected the Medicaid expansion, like Wyoming, saw more modest drops in the number of uninsured. The uninsured rate only fell from 13.4% to 11.5% between 2013 and 2016 in Wyoming. 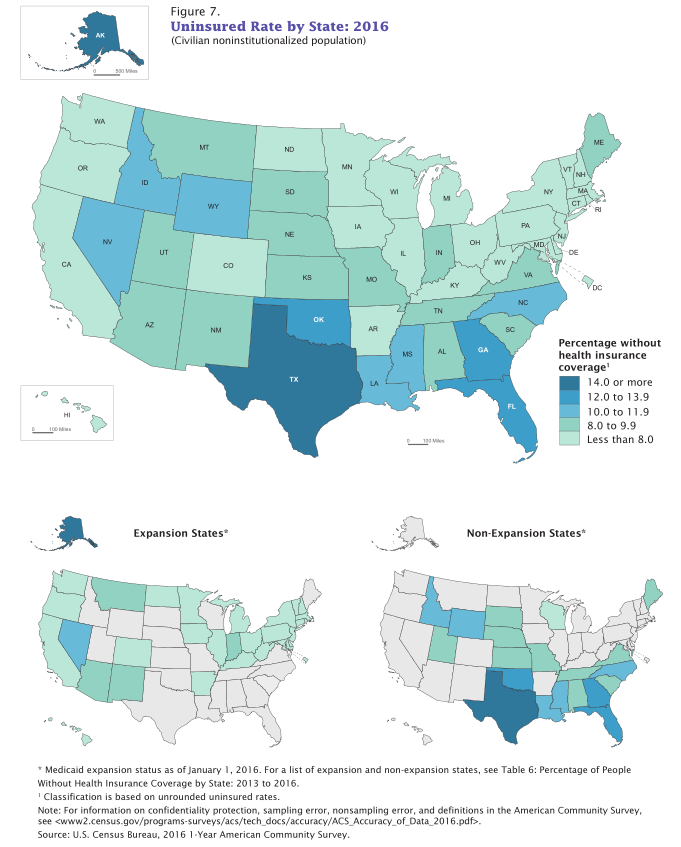 Texas, which also did not expand Medicaid, remains the state with the highest percentage of uninsured, with 16.6%, while Massachusetts had the lowest rate, at 2.5%.

The fate of the ACA, which sparked much of the drop in the uninsurance rate, is very much uncertain. It's been the subject of a fierce recall effort for much of the year, and most recently, Democrats and Republicans submitted two competing plans to replace it.

The Republican plan, put forth by Sens. Lindsey Graham and Bill Cassidy, largely matches bills from earlier this year, which were questioned for how much they covered people with pre-existing conditions, as well as the poor and elderly. Some Democrats have championed a plan by Sen. Bernie Sanders, which he calls the Medicare For All Act.

The bill would lower the age for Medicare qualification from 65 to 55 after its first year of passage, then gradually phase in the rest of the population over the next three years. It would cover hospital stays, prescription drugs, vision and dental care.

Sanders proposes to pay for the costs of the bill through one of various financing options, which mostly involve increasing taxes on various groups.

Meanwhile, open enrollment for 2018 ACA individual coverage is scheduled to go forward Nov. 1 to Dec. 15, a shorter time period than past years, and with a tenth of the advertising budget. Given those obstacles, it's fair to ask whether we can expect uninsured rates to keep going down in the future.