Chicken Slackers: Is the Popeyes sandwich worth it? Over the past few days, no issue has dominated the discourse more than the Popeyes chicken sandwich. Publications such as the Washington Post (“great”), Slate Magazine (“just fine”) and the New Yorker (“here to save America”) have weighed in on the sandwich.

Here at Policygenius Magazine, our mission is to help you make smart decisions with your money and time. In that spirit, a group of our writers commandeered our boss’s credit card and trooped over to a New York City Popeyes to figure out if its chicken sandwich was worth all the fuss. In other words: Yeah, we ate the sandwich. And then we talked about it on Slack. Here’s what we said.

Anna Swartz : Yes! A bargain at $4 I say. I think I'd pay anything under $10 considering what I pay for Manhattan lunches.

Colin Lalley : Definitely a steal, especially compared to other places like Shake Shack.

Elissa Suh : Agreed. My reference points are the fast casual ones like Shake Shack and Fuku, which are about $9. They’re better but I’d just as happily get Popeyes.

Cameron Langhoff : I think $4 for two pieces of bread, some pickles, chicken and sauce is reasonable.

Colin: $7 would be my max I think (for just the sandwich).

Cameron: $10 would definitely be pushing it.

Myles: Where does it rank in terms of other $4 purchases you have made?

Zack: $4 purchases of what?

Reina Marszalek : It ranks high because it's edible.

Elissa: It’s cheaper than two slices of pizza. It’s also equivalent to a pastry in New York City, which I regularly shell out for. I think I’d rather pay for the sandwich. It also has less sugar.

Myles: Wow, good point. I feel like it's more satisfying than two slices of pizza.

Colin: Reina, that’s too much for a mocha. 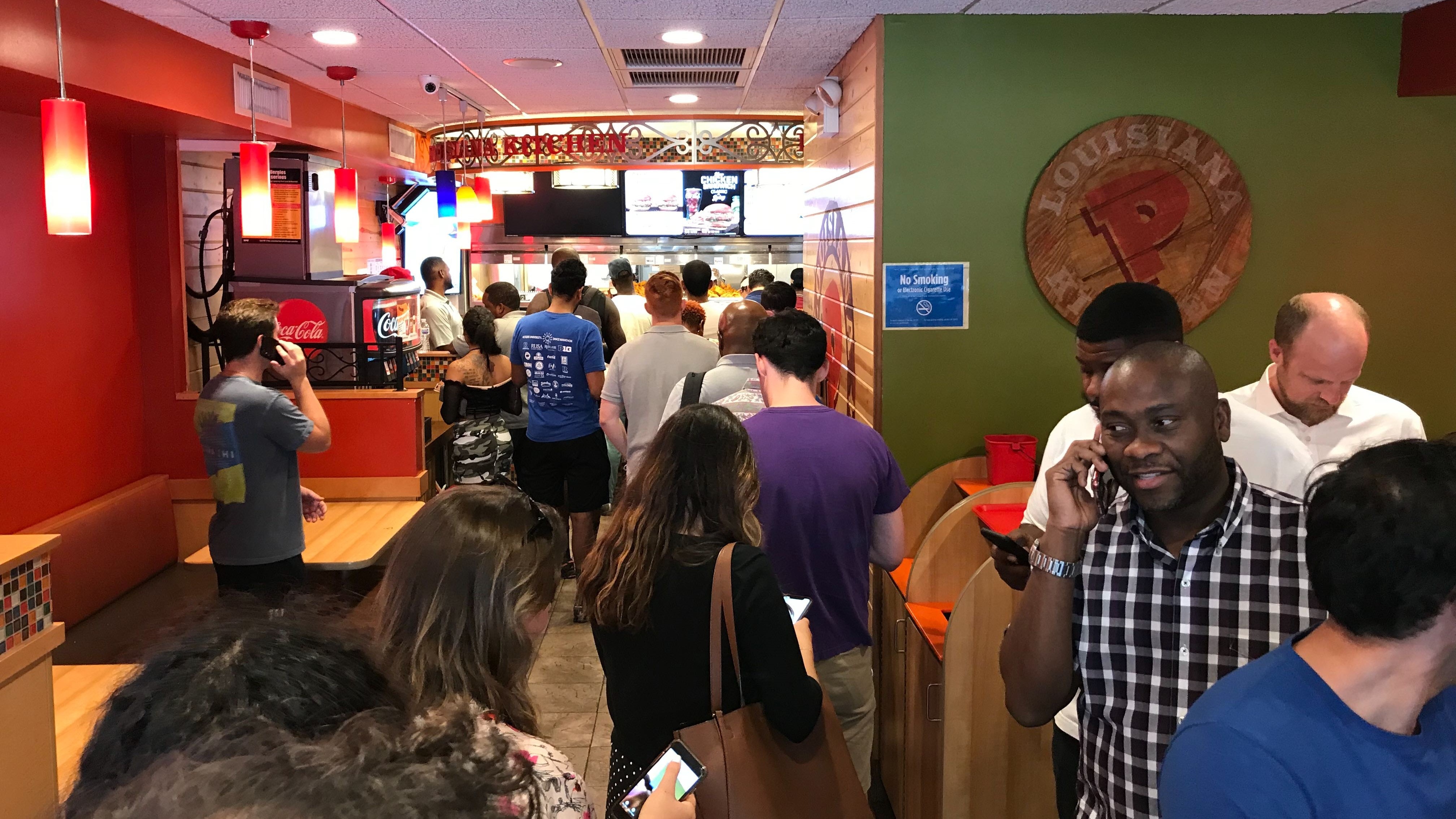 Myles: OK, obviously we have to address the time element: We got there at 12:12 p.m., waited in line for 20 minutes, and waited another 20 minutes to get the food. Is it worth the wait?

Anna: As one person in line put it, "It's worth the wait!"

Zack: No. You can put a mobile order in at Shake Shack and you don't have to wait at all. Zero stars for waiting.

Myles: I enjoyed talking with the other customers. People were taking selfies and stuff. It was a scene.

Anna: I agree, Myles, it was an Experience. The vibe was like waiting to get into a concert. A concert where the band is a chicken sandwich and you get to eat it.

Cameron: It's definitely an experience, not just a quick lunch break. I was surprised by how friendly everyone was, especially for New York.

Colin: For the first time, it was worth the wait. Wouldn’t wait that long again. But the crowd was great. Lots of camaraderie.

Myles: I was telling someone else while waiting for the sandwich that it felt like the part right before you go over the crest on a rollercoaster. The anticipation for me was almost as good as the sandwich.

Anna: Wow, Myles, I didn't know you were feeling that level of excitement.

Myles: I was downright frothy, Anna.

Colin: Myles did use the word “frothy” while we were waiting, that’s true.

Myles: Would you do it again?

Reina: I would go again maybe during a weird hour when it's empty. Maybe a 4 p.m. pre-dinner snack.

Myles: I think I would, but I don't know if I'd want to wait that long to be honest. I think it was a one-time novelty.

Colin: I would, but not at noon.

Cameron: Probably not if I saw the line was out the door.

Zack: I go to Popeyes with some frequency, but I wouldn't order the chicken sandwich again.

Pat Howard : Also major shoutout to the four Popeyes employees back there slinging all them sammies.

Myles: It's true, kudos to them for keeping the mood up.

Myles: I think it helped a lot that people were so lighthearted. If people were fuming, it would not have been as good.

Zack: Yeah, I think everyone kind of knew how surreal it was to line up for a chicken sandwich, so nobody was taking it seriously.

Colin: Oh, I didn’t like the one guy who was trying to make small talk with the cashier. There were other priorities.

Myles: The guy at the register told me they only have one sandwich maker so their productivity was limited. I don't think we have answered the question everyone is asking in the discourse at large which is, how does it stack up to the Chick-fil-A sandwich or other chicken sammies you've had in your life?

Myles: Better than Chik-fil-A. Probably better than most chain places to be honest. I don't feel super gross right now.

Anna: Better than Chik-fil-A and Wendy's for me. I do feel a little gross.

Cameron: It was some quality chicken.

Zack: It was a perfectly neutral chicken sandwich.

Zack: It was good! But it was not better or worse than other chicken sandwiches.

Zack: It tasted about the same!

Anna: This shocks and distresses me that you experience all the chicken sandwiches EXACTLY equally.

Zack: Not exactly! But the differences were statistically imperceptible.

Myles: We just have to take your word about Bojangles because it has not graced our fair city.

Elissa: The Shake Shack and Fuku $9 sandwiches taste better. But this is better value. The sandwich was not spicy. I want to try Wendy's.

Myles: What % of your enjoyment do you think was just hype? I think, like, 60% was hype. I think tomorrow I will look back on this and think "pretty good sandwich" and not think about it anymore. But I was excited to be part of the zeitgeist.

Colin: I don’t think any of it was hype. I didn’t read any of the thinkpieces.

Elissa: Me neither, also never had Popeyes. Not a bad experience.

Anna: I think I will continue to stan for it. And I recommend the Helen Rosner piece in the New Yorker for people ready to consume some chicken takes!

Cameron: I'd say like 50% hype. It was great, but there was little to no reason to be so excited about a chicken sandwich.

Anna: Excitement about food is basically the only thing that can unite this broken nation so there's a lot riding on this chicken sandwich!

Colin: I think that’s just where we’re at. "Avengers: Endgame" came out, "Game of Thrones" ended, we needed a new piece of collective culture to unite us.

Myles: Alright, chicken talk is over. Please leave your final thoughts and take a nap.

Elissa: I need to drink a gallon of water.

*Want to continue the conversation? Check out the best money our slackers have ever spent.*