OneNote review: note-taking for freelancers on the go

We’re going to make a big assumption going into this article: you’ve heard of Microsoft, right?Windows, Excel, Bill Gates, Blue Screen of Death, Xbox – they’ve all been a part of our lives, for better or worse, for a few decades.But have you ever heard of OneNote?OneNote, Microsoft’s cloud-based note-taking app, has taken a backseat to more popular software, but it’s actually a pretty powerful and useful tool. And even though Microsoft programs are usually associated with a stodgy office environment, OneNote is a great way for freelancers to manage their notes in one place.

On the surface (that’s a Microsoft pun for all of you keeping score at home) OneNote is a note-taking app. Have a thought you don’t want to lose? Instead of pulling out a notepad like it’s 2002, just grab your phone and jot it down in OneNote. Thanks to its connection to the cloud, your notes will follow you. Write something on your laptop and when you’re out seeing a client, pull out your tablet and it’ll be there. Tag the note to categorize them, and you’ll never be more than a few mouse clicks or finger taps away from what you need.OneNote is integrated with the Microsoft Office family of programs. That means you can easily port your notes over to Word, Excel, or PowerPoint when you’re ready to do something more with them. And since Microsoft has made it a focus to update Office for the digital age – a subscription-based model with OneDrive cloud access and increasingly good mobile apps – it makes for seamless collaboration wherever you are.OneNote shines when you take it beyond simple note-taking. Save audio files, images, or even entire web pages, and, thanks to OneNote’s freeform formatting, compare them side by side, doodle your own comments straight on top of them, and share them with coworkers or clients.

What can freelancers do with OneNote?

Appropriately, OneNote is a robust note-taking app. But there’s a lot more to it than that. The variety of notes you can take, the ability to pull things in from external websites, and a few extra features make it useful in a lot of different situations.

Microsoft has really tried to make OneNote feel like a notebook or classic three-ring binder. It’s evident in the naming conventions. You can create Notebooks within OneNote; inside each Notebook is a Section, and you can add Pages to Section. Pages then hold your individual notes.Let’s say you’re a freelance web designer. You could have a Notebook for Client A, a Section for a homepage redesign project, and then Pages for the individual components of the redesign. That way you’re keeping everything separated and ordered, just as if you had physical notebooks to organize your work.You can also tag Pages and the notes you take. Microsoft has included a lot of prebuilt tags – including things like important, contact, client request, remember for blog – so you can easily mark and search for specific items. You can also make custom tags if none of those suit your fancy.When it comes to taking notes, there are some pretty standard components. You can write text, create checklists, doodle (a big component for tablets), record audio, and upload images. With the latter, you can use OCR technology to extract text from things like uploaded PDFs and images. That’s something that Microsoft pushes by noting that you can use it to extract information from business cards – which is only available on Evernote’s highest paid tier. 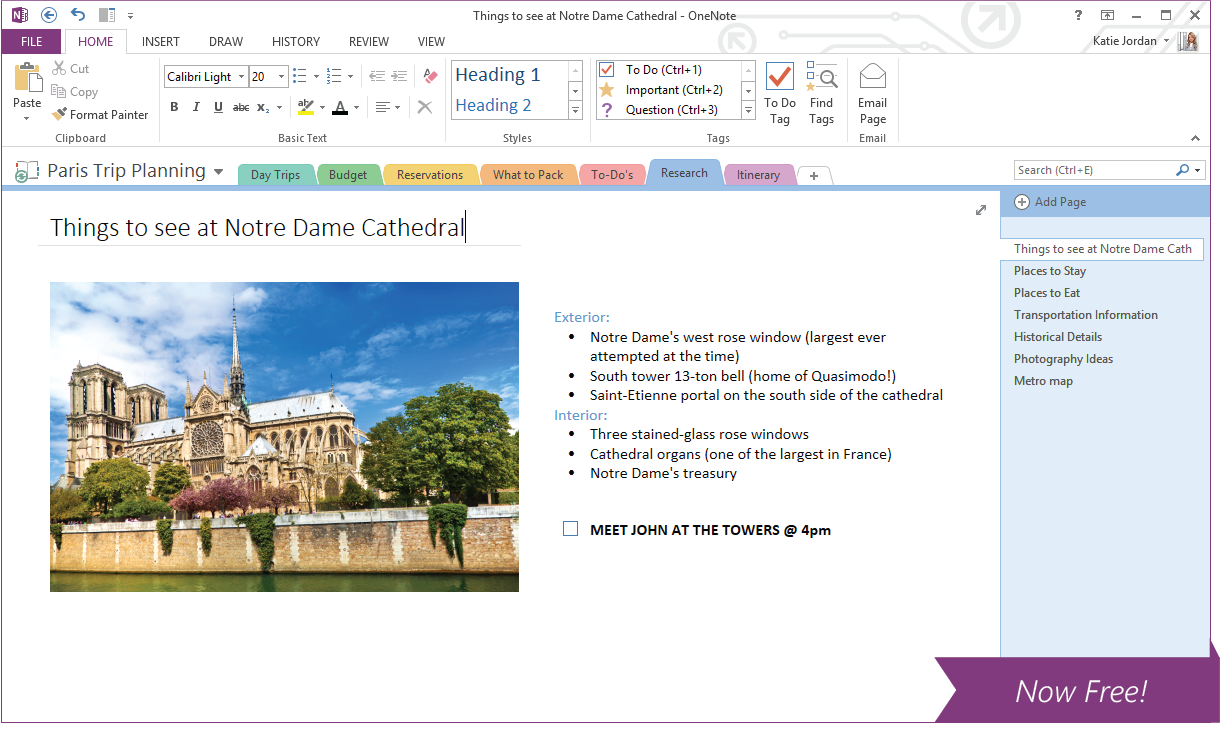 ] Image: MicrosoftOne of the coolest features of OneNote, though, is its "free formating." With most other programs, you’re limited to line-by-line typing, like with your average word processing program. But with OneNote, you can group text or images as floating elements in their own (invisible) boxes. That means you can start typing anywhere you want on the page, move it around, and create a new element right next to is. You can use this to, say, place an image of a website in a Page and, right next to it, a checklist of changes you need to make to it that day.

Aside from writing your own notes, you can also clip information from websites. Microsoft has released web clipping extensions for Internet Explorer, Chrome, Firefox, and Safari, so you can clip straight from your browser. This allows you to extract an entire webpage to OneNote, a selection of a page, or an "article" view, which is essentially the whole page but with a lot of the flourishes stripped out for easy reading. You can then doodle or comment on the clipping to add your own notes to it. 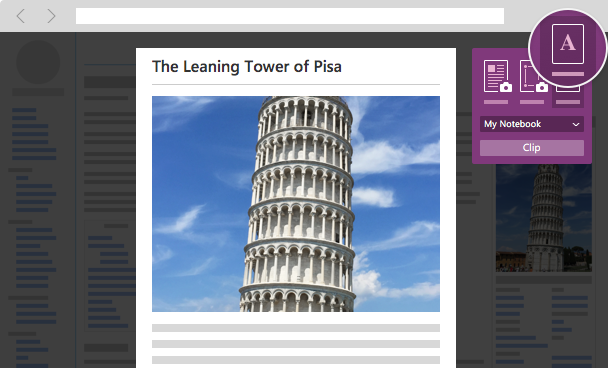 Image: MicrosoftFor freelancers looking to keep up with the latest industry news or get inspired by a trend, design, or idea, web clipping is a great way keep all of those interesting articles in one place for easy reference later.

Besides note-taking and web clipping, there are a lot of other things OneNote does to make your life easier.If you don’t feel like saving something to your OneNote, you can email yourself whatever you want to save, and the next time you open OneNote it’ll be synced and waiting for you.In addition to integrating with Microsoft Office programs, OneNote also plays nice with third-party apps. For instance:

Finally, there are some cool learning tools for people who have trouble reading, whether it’s because they’re non-native speakers learning to read English or students with dyslexia. It’s not a featureset that will be applicable to everyone, but it’s a nice add-on for anyone who’s looking for that extra differentiator.

What are some drawbacks with OneNote?

OneNote is a Microsoft product, and it’s apparent when you see how much better it is on Windows platforms than it is on others.OneNote is definitely capable on other platforms, but it’s limited. Take templates, for example. You can use templates as a quick way to throw together a report or presentation in OneNote...if you’re on a Windows device. On Macs and (non-Windows) mobile, you’re out of luck – no template options there.You’re also limited on mobile devices in other ways. You can’t tag items with anything but a to-do tag, there’s limited search options, and web clipping – a powerful tool otherwise – is just a copy and paste of a page headline and URL.To get the full force of OneNote, you need to be a Windows user. That’s surely what Microsoft wants, but many users would probably disagree, especially in the mobile realm.

Is Microsoft OneNote right for freelancers?

If you want to know if OneNote is right for your freelance work...well, that depends on what you value.If you’re in the Microsoft ecosystem – Windows, Office, maybe a Surface tablet – it’s an almost certain yes. It’s a great tool that stacks up well against competitors, and all for free. You can work from your home office, at a client site, or while you’re traveling and take those notes (or recordings, or pictures) everywhere, no matter the client or the project. Plus, it works with programs you’re already using, so there’s no headache in getting things synced up.But if you’re willing to pay and you’re more of an iOS or Android person, it might be worthwhile looking elsewhere. You might be able to find a program that has everything you need and isn’t limited on certain operating systems. Evernote, for example, is pretty platform-agnostic, and you won’t find yourself hampered at all if you’re not a Windows user.Do you use OneNote or another note-taking app for your work? Have you found one that works better for you than another? Let us know in the comments what your favorite is!Image: Microsoft