Survive the New York City subway with these 6 apps

"Bad" means a lot of different things. "Bad" is a synonym for "old" and "overcrowded." It means 75,000 delays a month, cars filling with smoke, cars derailing and having the doors ripped off, and people tweeting @NYGovCuomo to fix the subway.

The Metropolitan Transit Authority (MTA) is writing notes via an online form to excuse people late for school or work. All of these problems will cost the city an estimated $1.4 billion in lost earnings and productivity in 2017.

Whether you’re an NYC native or visiting the Big Apple, taking the subway is increasingly slow, inconvenient, and dangerous. Until the systemic issues afflicting the subway are fixed with Governor Cuomo's recently announced state of emergency or, more realistically, Uber releases their fleet of flying cars, your only option is to navigate delays and shutdowns as best you can. (Getting around in your own car is downright impossible in the city, but if your commute has you headed to the ‘burbs, check out our guide to car insurance here.)

No wonder transit apps have become so popular in the past few years.The basics of a subway-tracking app consist of a) telling you how to use public transit to get from Point A to Point B, and b) notifying you of delays and train changes. Each of these six apps hits those marks, but they all bring their own unique features to the table so you’re bound to find the perfect one for you. 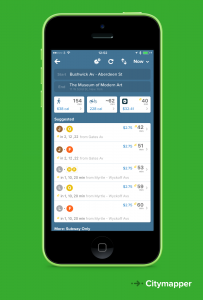 Citymapper is my personal preference when it comes to subway apps. It’s clear and convenient user design, combined with its customization options, make it an essential.

Everything on the Citymapper home screen is clearly laid out and easily accessible (which you wouldn’t think would be a design win in 2017, but there are a lot of ugly apps out there). It’s all in service of getting you the information you need when you need it: You can set a number of favorite places for quick access, note which trains you use on your morning and evening commutes, and quickly see saved stops. You can completely tailor the home screen for your commute, without extraneous information. The GO feature, pegged as "your personal travel assistant," gives automatic notifications, including when to get off a train, which can be useful if you’re not used to taking the subway.

Citymapper is also one of the better choices for other modes of transportation. You can see nearby Uber locations, find out where car2go cars are, and even see Citi Bike locations – plus how many bikes are left at a dock.

Finally, for those who like to gamify their commute, Citymapper will show you how many calories you’ve burned, how many trees you’ve saved, and how much money you’ve saved by using public transportation. You can even see how you compare to the rest of your city. 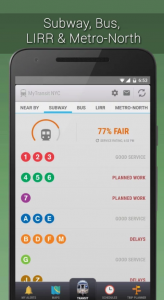 MyTransit NYC gives the requisite delay notification information, but its real value comes in the way it aggregates other information to give you a bird’s-eye view of the subway nightmare you’ve stumbled into.

First is with its service rating score. One thing that can be hard to grasp with the New York City subway is how connected it all is. An issue on one line can cascade and cause issues somewhere else. The first thing you see when you open MyTransit NYC is a list of lines and, at the very top, an aggregate score of the overall state of the subway. Even if your line is listed as being in good service, a service rating of, say, 66% might cause you to take a look at what’s happening elsewhere and see if it’ll affect you.The other cool feature is with its crowd feed. When you select a line you can see the MTA status, but you can also see a crowdsourced Twitter feed. As I’m writing this, I see the N/Q/R/W line as being in good status...but a quick look at the crowd feed shows someone complaining about two N trains in a row, with no R or W for the past 20 minutes. It’s not often that people venting on Twitter is pleasant, but in this case it can be very helpful for finding information before the MTA updates its status reports. 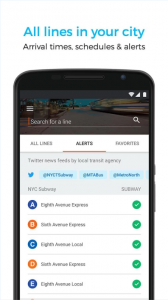 Moovit is a completely serviceable transit app. When you open it, you have the options to get directions, view nearby stations, or find a line for schedules and alerts. Its "Best Way Today" feature gives you the best route before you leave for your commute. It has a clean interface. When you view alerts, you can also quickly access various transit agency Twitter feeds for the most up-to-date information.

But what’s really interesting about Moovit is what it’s doing with all of the transit information it’s collecting through the app. The company is creating what they call a smart transit suite, and billing it as "the world’s most comprehensive tool set to help cities and transit agencies shape the future of urban mobility." With movement analysis, transit surveys, a visual data studio, a cloud-based bus locator, and a trip planner API, Moovit wants to give cities the ability to better plan their public transportation systems by letting them know where people are going, how they’re getting there, and how they feel about it.

Moovit has a lot of the same features you’ll find in other subway apps. But by using it, you just might be improving the future of public transportation – and the New York City subway can use all of the help it can get.Available on: iOS, Android 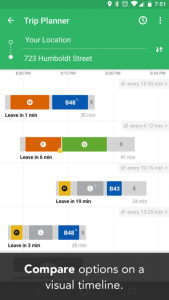 Transit doesn’t have a lot to it that you won’t find in other apps. That’s not a bad thing: If the trains are messed up and you’re feeling your blood pressure start to rise, a straightforward app without any bells and whistles might be exactly what you need so you don’t get even more frustrated.

One handy exclusive feature is the ability to pull in locations from your phone’s calendar, letting the app navigate without you having to dig through a separate app from the destination. It also has a visual timeline of different routes, making it easy to see how one line’s travel time compares to another. 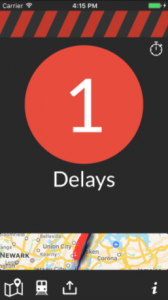 Transit Delay NYC is the most barebones of the subway apps we looked for. In fact, everything it does is right in the name: tells you when there are delays on NYC transit.

Choose a line, and you’ll see a full screen display of that line’s status. Good service? Delayed? Service change? Right there, ready for you to see. And… that’s basically it. You get a map and a schedule, but no navigation options like you’ll find elsewhere. If you really just want to know which trains you should avoid (and little else), Transit Delay NYC is your best bet. 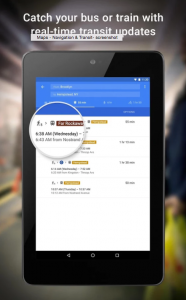 Google Maps makes the cut because...well, it’s Google Maps. Let’s be honest, you’re not using Apple Maps or MapQuest. It’s the go-to navigation service whether you’re using a desktop or a smartphone, and it comes standard on all Android devices, which means no downloading anything extra.

Google Maps is especially helpful for tourists, because it can be your one-stop-shop for figuring out the subway system and any other navigation needs. Street View lets you see your destination when you’re in an unfamiliar part of town (useful even to people who live in New York), and powerful search capabilities mean you’re certain to find any place you’re looking for, along with Google-powered information like reviews and hours of business.

It’s not as intuitive as other apps for sorting different forms of public transportation – unless you’re searching for a specific destination, nearby bus stops tend to drown out subway stations – but it’s hard to beat the wealth of information you can get with a single app.

It’s hard to get around New York City without resorting to the subway, and the difficulties of using the trains are a reality we’ll all have to deal with for the time being. But before you make your morning commute or start your sightseeing, download one of these apps. You’ll save yourself a headache in the long run.

Believe it or not, New York City commuters don't have it the worst. You can see what city took the top spot for tedious commutes here.