The insurance secret that Uber doesn't want you to know Someone pulls up an app on their phone, types in the address of where they need to go, and orders your car. You turn around and drive to pick them up.

While you're driving, you look over to your phone to make sure you're still heading in the right direction. While you're looking the other way, you hit a car. It's not a big accident (luckily), but it's bad enough that the other driver calls the police (and you have to cancel your pick-up).

The police get there, they take down all of your info, including the fact that you were driving for a company called "Uber." You submit your claim to your auto insurance company and go about your life.

A few days later, your insurance company calls you. Unfortunately, your claim has been denied because you were performing a business activity. You're now on the hook not only for your own car repairs, but the other driver's, too. Oh, and by the way: your car insurance policy has been canceled.

You contact Uber to see if their insurance policy is going to cover the damages. Nope, says the woman on the other end of the phone. Since you didn’t have a passenger in the car, they’re not liable. Consider yourself lucky you didn’t hurt anyone.

A Taxi By Any Other Name

That's right: unlike traditional taxi medallion companies or a black car service, almost anyone can drive for UberX, Lyft, and Sidecar. All you need is a car and a smartphone app. This is controversial for a number of reasons, ranging from worker's rights to safety issues. Writer David Fagin went undercover as an Uber driver for Huffington Post. He didn’t have any trouble: " pretty much take anyone, as is demonstrated by the downloadable video test you have to pass, which is about as hard to master as tying your shoes. From there, as far as I can tell there's no license check; you simply get your vehicle's paperwork and head to a nearby Holiday Inn."

Lyft and Sidecar have described their services as "ride-sharing." They're not taxi companies, or even a driving service - instead, they provide "marketplaces" where drivers can offer their services and users can get a ride. Lyft even goes so far as to describe their users, on both ends, as a "community." It's "your friend with a car," according to the website - not a driver you're hiring.

Critics, especially traditional taxi drivers, see this as deceptive. You pay a "suggested donation" to your Lyft driver, for instance, and if you don't pay it, you'll be blocked from the service. They are, for all intents and purposes, taxis.

The tension between our traditional idea of a taxi and the updates to the model that UberX, Lyft, and Sidecar provide is at the heart of the debate between government regulators and the companies in question. The California Public Utilities Commission (CPUC) went so far as to categorize UberX, Lyft, and Sidecar as an entirely new category of transportation services: transportation network companies, or TNCs.

The issue of what exactly a transportation network company is has plagued Uber and its competitors across over thirty U.S. states and almost a dozen countries. So far, government officials have been unimpressed by the companies' insistence that they are not taxis, and therefore get to skirt around regulation.

Uber, Lyft, and Sidecar would rather have you think of them as technology companies. As Uber wrote in a legal filing with the CPUC:

They set the rates for both the passengers and the drivers. They collect the money and pay the driver. They hire the drivers. They blackball undesirable passengers. They tell their drivers where the best places to pick up are and, if the drivers don't pick up a high enough percentage of the fares, Uber fires them. But Uber isn't in the transportation business. Right!

Government agencies and regulators overwhelmingly agree with Healy’s take: Uber is a taxi company, whether they like it or not. (If you were to ask Uber and its defenders, however, they would probably tell you that regulators are in the pockets of a deeply entrenched taxi industry.)

How governments have chosen to deal with these companies has varied wildly. Some, like California and Colorado, don't see the point in completely outlawing TNCs, especially since they've proven incredibly popular compared to traditional taxis.

Colorado, the second state to enact regulation for TNCs, took a liberal approach to the services. Unlike Colorado's taxi drivers, TNC drivers will not have to go through criminal background checks. As Colorado's Governor John Hickenlooper declared, "rules designed to protect consumers should not burden businesses with unnecessary red tape or stifle competition by creating barriers to entry."

Police in Houston, Madison, and Pittsburgh, on the other hand, have issued citations to Uber and Lyft drivers for "operating an illegal taxi." Many states where Uber has set up shop have issued cease-and-desist orders until legislators can enact regulations.

The Insurance Secret Uber, Lyft, and Sidecar Don't Want You To Know

All of that backstory is very important in understanding the debate happening across the country right now: who, exactly, is liable when a driver gets into an accident?

It's a question that strikes at the heart of how these companies self-identify. If they are just facilitating a relationship between a third-party driver and a user, as they claim they do as "technology companies," then they shouldn't be liable for much, if anything.

Despite the Lyft website describing their drivers as "your friend with a car," auto insurance companies see them as commercial drivers. If you have a PCI policy, insurers typically won’t cover an accident that occurs while you’re conducting a commercial activity. Some drivers have reported being able to file a claim with the insurance company fully aware of their status as a TNC driver, but KQED speculates that since CPUC’s first step in regulating TNCs, insurance companies have been more cautious about TNC drivers. Post-regulation, the auto insurance companies have been clear: PCI policies don't cover any "vehicles used for transporting passengers for a charge," according to the Personal Insurance Federation of California.

There have even been reports of insurance companies like Geico canceling PCI policies or refusing to renew them because of a driver's UberX or Lyft activity. KQED, a public media company in Northern California, reported on several California drivers being turned down for insurance after revealing their plans to drive for TNCs. 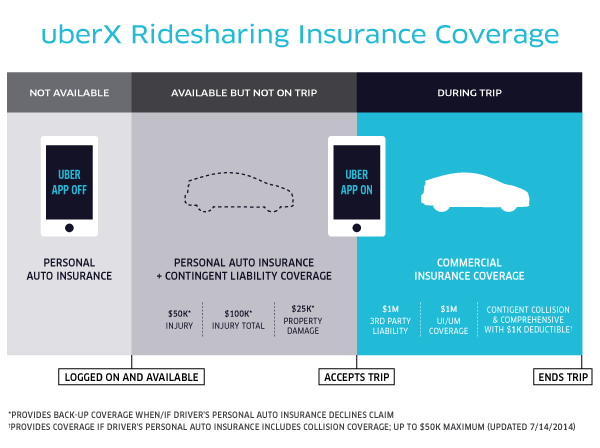 This insurance gap came to the public's attention at the beginning of this year, when Syed Muzzafar, an UberX driver in San Francisco, struck an entire family with his Honda SUV, killing six-year-old Sofia Liu. Liu's family has filed a wrongful death lawsuit against Uber, though Uber is denying that it is liable for any damages because Muzzafar did not have a passenger in his car at the time of the accident.

This is only one state, however, and elsewhere in the country, TNCs are no under no obligation to offer coverage for drivers when they don't have a passenger. Many drivers remain unaware that they may not be covered by their personal auto insurance policy. Hopefully, auto insurance companies will be encouraged by California's new regulations to create hybrid personal and commercial insurance policies, but questions still remain about how those policies would work. As New York Time's Ron Lieber put it:

The bill also encourages insurers to develop new policies for drivers that could handle both commercial and personal vehicle use; it remains to be seen whether companies like Uber and Lyft will buy it for drivers, whether the drivers will have to buy it themselves, what it will cost, how much the additional costs will add to customers’ fares and whether other states and cities will adopt similar rules.

How do drivers protect themselves?

If you’re a driver for one of these companies, you might be a little nervous after reading all of that. If you want to make sure you’re covered, there are a few things you can do.

The easiest thing to do would be to buy commercial auto insurance, but for many part-time drivers, this isn’t cost effective. You might be better off contacting your current insurance provider and asking questions about how they deal with claims filed by TNC drivers.

You should also see what kind of local or state regulations are in place for TNCs and their drivers. If your state requires that TNCs provide insurance, contact the company you work for and get proof of insurance for your car.

In the meantime, you can also push your state representative to push forward legislation that would regulate TNCs. You can also contact your insurance company and let them know that you support the creation of hybrid personal/commercial policies.

The specifics around rideshare insurance might be confusing, but it's a necessary part of your financial safety net. And it's important for drivers to look beyond just insuring a vehicle, too.

If you have beneficiaries that depend on your financially, do you have life insurance? What about protecting your ability to replace income if you can't drive with long-term disability? Even if money's tight, you should look into a short-term disability policy, like the kind available through Policygenius partner LifePreserve.

Don't leave yourself open to risk. Make sure your financial protection is complete by protecting yourself from every eventuality.