I'm a traveling whiskey influencer. Here's how I budget You can usually find Nate Woodruff, 32, photographing whiskey on a Colorado mountain or California coast. Whiskey brands pay him a combined $3,200 per month to take scenic pictures of their bottles and post them on Instagram for his 26.6K followers.

Woodruff quit his job in January, ditched his house and sold his possessions, including his extensive whiskey collection, to become a social media influencer. He used that money to purchase a 1995 Chevy Roadtrek van and renovate it for him and his dog Skye to live and travel in.

Becoming a traveling whiskey influencer was a natural move for Woodruff. He was born and raised in Boonton, New Jersey, and got started as a bartender collecting whiskey bottles and reviewing them. “When I first started getting into the whiskey industry, I spent thousands of dollars on bottles to review and share. I had my own personal collection,” said Woodruff. “I essentially paid as much as I would have for a solid college degree in whiskey and used that to learn.”

Don't let your friends miss the Money Gossip. Refer them to our Easy Money newsletter.

He became well known for his collection and hosted taste-testing parties, creating several connections in the industry. “Obviously I didn't drink all that myself or I'd be dead, but it was a good experience to network and share samples with people,” he said. “Over the course of four years, I would say all the whiskey that I bought, consumed and shared was a huge learning experience for me. I got to study that way.”

How do influencers make money?

Woodruff takes photos of whiskey while perched on mountain peaks or resting on beaches. Whiskey brands like Boulder Spirits, Wyoming Whiskey and B&K Classic Cocktails pay Woodruff to take scenic photos of their bottles and post them on his social media channels. The brands also own the pictures he takes, making his partnerships a blend of marketing and content development. For example, one sponsor pays him $200 per month for one photo of its whiskey posted on his Instagram. His biggest sponsor pays him $2,000 per month for six to eight photos. Each brand owns the pictures Woodruff takes and uses them to promote their brand.

To capture the perfect shot, he tries to hike and photograph bottles twice a week, but the wildfires throughout the West Coast have made it nearly impossible for him to do so. “If I finally get a clear day, I’ll shoot a lot of photos and post them throughout the month. A lot of places I’m in are beautiful, but you just can’t see anything right now.”

What does it cost to be a whiskey nomad?

Woodruff earned $7,000 after selling almost everything he owned and spent just under $5,000 for his used Chevy. It took another $2,000 to update the mechanics and interior including a fresh paint job, carpeting, microwave, stove top, sink and bed frame. He ripped out the van’s old toilet to make room for more storage.

“I’ve got the woods,” he said. “There are gas stations you can hit. A lot of trail heads have port-a-potties, so that's usually where I can take care of all that business. I plan for that in advance.”

While Woodruff's been on the road, he’s experienced one mechanical issue after another.

“I definitely didn't budget enough for that,” he said. “I've dumped an additional $9,000 of repairs in the van over the past six months.” At one point, he had to take out a $800 loan from DigniFi, an online auto repair loan site. “I paid it back within 90 days. There was no interest, which is nice, but it had a $30 fee.“

Between COVID-19 and a plethora of natural disasters, Woodruff has encountered several business and budget disruptions. “I'll put it this way, there isn't really a budget ‘cause you can't budget for a lot of the stuff that's happened,” he said.

Here’s how he spends money on the road: 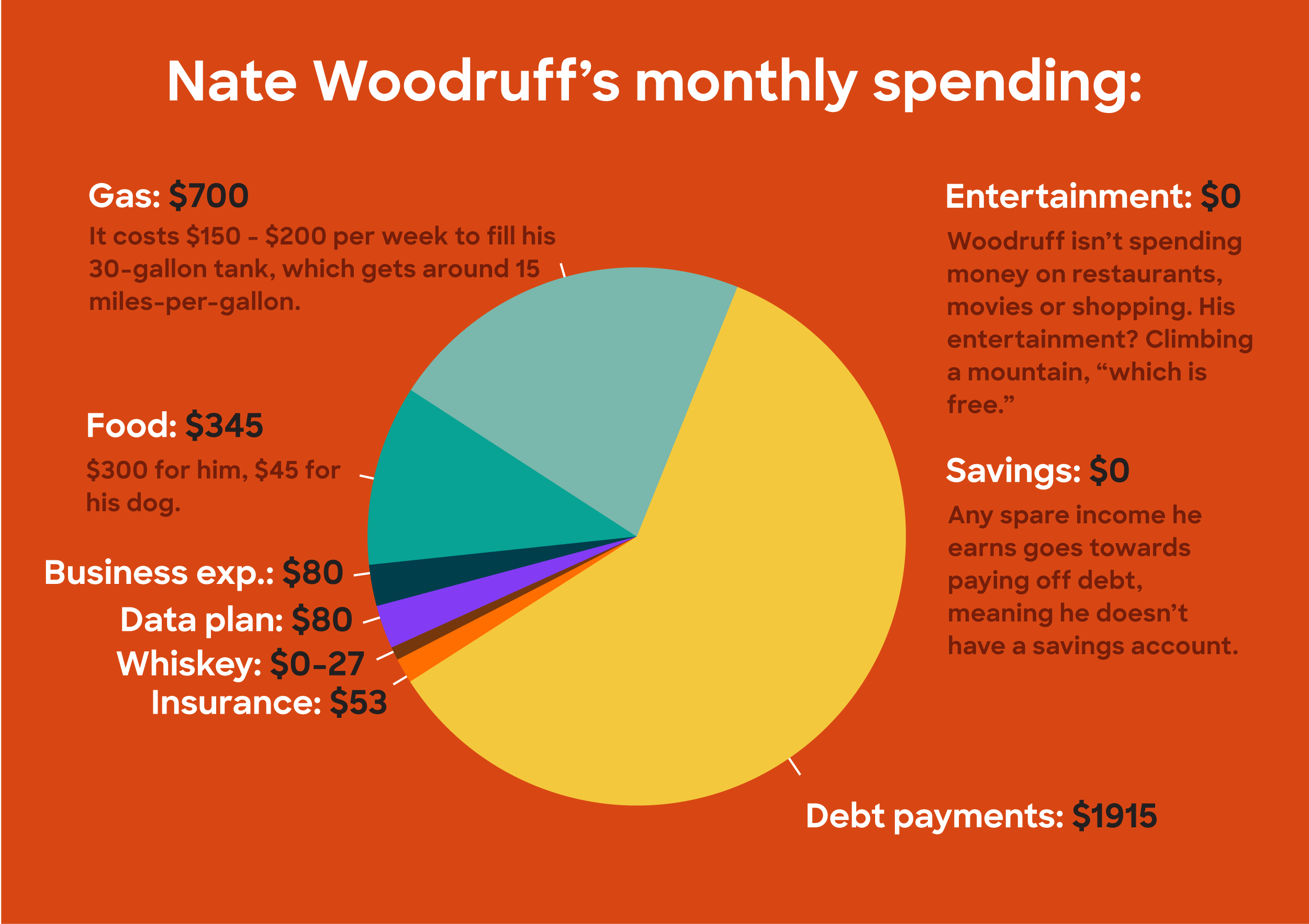 Entertainment: Woodruff isn’t spending money on restaurants, movies or shopping. His entertainment? Climbing a mountain, which is free.

Insurance: Woodruff insures his van using full-timer’s RV insurance by bundling car and homeowners insurance for $53 per month. He does not have health or life insurance.

“The way I look at it is if something bad happens to me, it's probably falling off a mountain and I'm not gonna need insurance for that,” he said. “‘Cause I’ll be dead.”

Food: Woodruff focuses on non-perishable goods and meal preps as much as possible. He spends roughly $300 per month on groceries for himself and around $45 per month on food for his dog, Skye.

“I can live in the woods without seeing another person or grocery store anywhere from a week to two weeks no problem,” he said.

Data plan: The last thing Woodruff wants to worry about on the road is accessing Wi-Fi. He pays Verizon $80 per month for an unlimited data plan on his phone and tablet.

Business expenses: At the end of each month, Woodruff books a few days at a hotel to send photos to clients, take a shower and relax. He spends anywhere from $50 to $120 per night. “I do have a fairly spacious van for what I do, but it does get claustrophobic and it's nice to just spread out.”

Whiskey: The distilleries that sponsor Nate give him free bottles, but if he ever runs out of whiskey, his go-to is Wild Turkey 101 Bourbon Whiskey for about $27.

Debt: Woodruff has just under $9,000 in credit card debt. Since the trip began, Woodruff has been dumping money into his van repairs and escaping natural disasters.

Savings: Any spare income he earns goes towards paying off debt, meaning he doesn’t have a savings account.

“I started off the trip in debt and almost broke and I'm going to end it in debt or almost broke at this rate,” he said. “So any income that I was going to save is going right back into maintenance for the vehicle.”

How do you save money?

The two biggest perks of Woodruff’s job are free: hiking and whiskey. When he can, he pulls over to camp, explores national parks, climbs thousand-foot mountains, and hikes mile-long trails. When he’s photographing whiskey, he’s not paying for it. He picks up bottles from distilleries along his route from brands who pay him for promotional photos.

If he does buy whiskey, his go-to is Wild Turkey 101 Bourbon Whiskey for about $27. The most he’s ever spent on whiskey? $550 on a pint of medicinal whiskey from the Prohibition era distilled in 1917 and bottled in 1932.

“It didn’t taste like $550,” he said, “but being able to drink a piece of history was definitely worth the money.”