How much money I actually saved on my electricity bill One of the first articles I wrote for PolicyGenius was "How to save money on your electricity bill." The answer is simple: swap out your energy supply company (also called an ESCO). You can do this in twenty-four states where the electricity industry has been deregulated, such as New York, California, and Texas.The reality is more complicated than a simple tip, however. First of all, it can be a confusing process to shop for and enter into a buying agreement with an ESCO. Secondly, you’re not guaranteed to actually save money. One of the takeaways from my research into ESCOs is that there isn’t a lot of transparency around pricing – and therefore, a lot of consumer mistrust.

Enter Choose Energy. Choose Energy is a third-party company that has created a marketplace for ESCOs, allowing users to easily compare rates and agreements from a variety of ESCOs. In New York, where I live, this is basically your only option for comparing ESCOs. Officially, Con Edison (New York City’s regulated utility company) has a tool that is supposed to help you compare ESCOs, but it looks like it was designed in 1998 and is about as helpful as gluing your fingers together.When I moved last summer, I used Choose Energy to sign up for a twelve-month fixed-rate plan from Constellation at 10.89 cents per kilowatt hour (¢/kWh). I could’ve gotten a cheaper plan, but at the time, the cheaper plan was only fixed for six-months. I cared more about lowering the volatility of my bill than saving a few cents per kWh, so I picked the twelve-month fixed plan.What does it mean to lower the volatility of a bill? Con Ed (and ESCOs) buy electricity on the open market, which means the price can change depending on things like production, time of year, and other factors. Con Ed (and most ESCOs) charge customers a variable rate, which means that they can charge a customer a different rate depending on how much it costs to buy the electricity. Choose Energy gave us some great data last year that compares the volatility spread (the difference between the highest bill and the lowest bill) of a variable ESCO plan versus Con Ed’s rate:

Fixed rate plans are supposed to be even better at dealing with volatility, since the only variable affecting your supply charges will be how much electricity you use.

It’s been ten full months since I signed up for that plan, and now I have ten months of actual bills to look at and analyze. 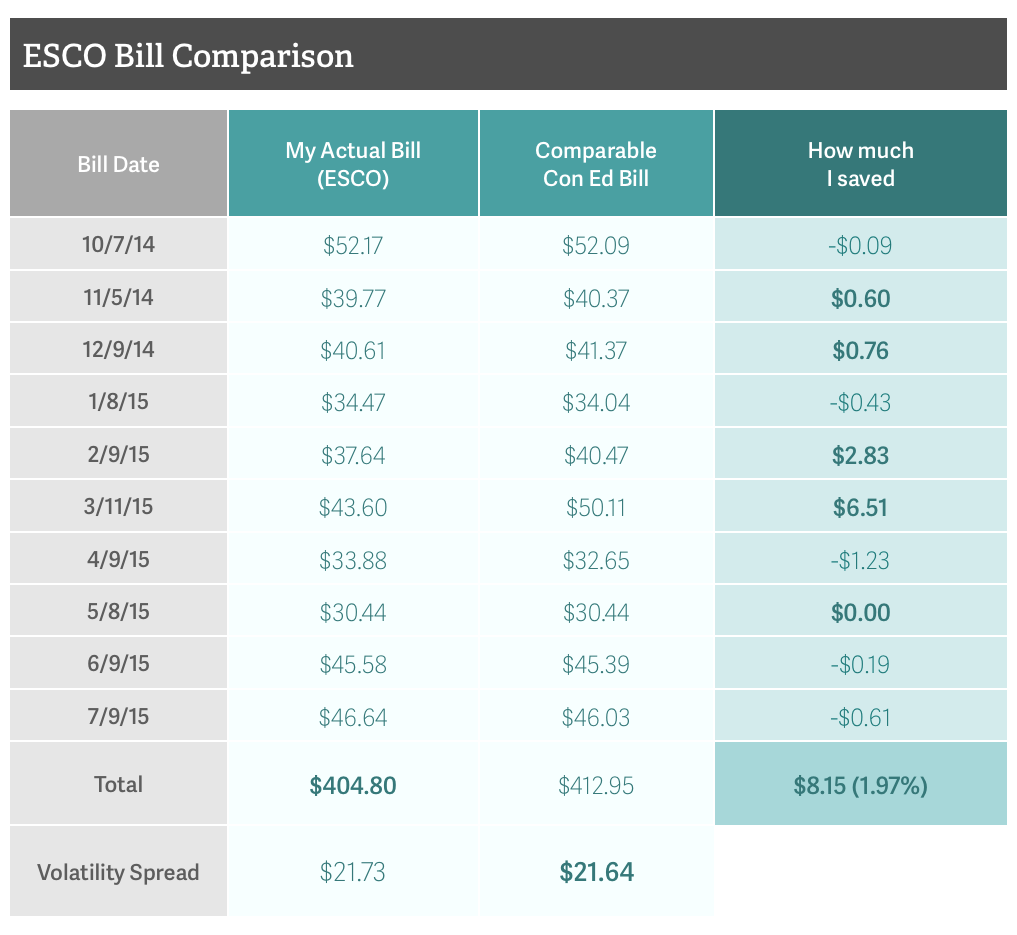 These numbers came from Con Ed’s official ESCO Bill Comparison Tool, which compares your total bill to what a "comparable" Con Ed bill would be. There’s no transparency here: Con Ed doesn’t tell you what their rate per kWh is, just what their total bill would be. It’s not that I don’t trust that Con Ed is telling the truth, I just wish there were a way to verify it.Assuming these numbers are correct, though, there are a few interesting takeaways. First off, there was actually more price volatility with my ESCO plan then there would’ve been with Con Ed. As you can see on the chart, there wasn’t a huge difference in that number between my actual bills and Con Ed’s comparable bills, but my ESCO plan was technically more volatile than what Con Ed's would’ve been.Second, I didn’t actually save that much money. I mean, eight bucks is eight bucks, but relative to how much money I spent, it just isn’t that much. I only ended up saving 1.97% over the course of ten months. Compare this to the average savings that Choose Energy told us last year:

This is not to say that Choose Energy’s numbers are incorrect – as I mentioned before, I specifically chose the more expensive plan because it stayed fixed for a longer period of time. You can also see that I use a lot less electricity than your average New Yorker. Even if you tack on another $81 to my total spent (two months of my average bill to round out the year), my roommate and I have still spent about $355 less than your average Con Ed customer.When I first did the math, I was obviously disappointed. Thanks to signing up for an ESCO – a relatively painless process thanks to Choose Energy – I was able to afford an extra Chipotle burrito every year. Hurray?

But these numbers don’t tell the whole story.

After using Con Ed’s ESCO Bill Comparison Tool, I went into the archive to look at my actual bills. Digging into the data that Con Ed provides on each bill, I realized two big things: 1) only 26% of my electricity bill is spent on electricity and 2) even if you try to cut your volatility by picking a fixed-rate plan, another 25% of your bill is still based on a variable rate.Let’s tackle the first realization. I already knew that most of the bill went to Con Ed and their various charges, but I didn’t realize just how much. When I added up the total amount of money I gave to my ESCO, Con Ed, and the total amount of all my electricity charges, I saw that only 26% of my bills were going towards electricity charges.

This isn’t that surprising when you take a look at my bill. The majority of the bill goes towards two Con Ed charges: one for "basic service" and one for delivery. While the delivery charge is based on a variable rate per kWh – more on this in a second – I have no idea how the basic service charge is calculated. For whatever reason, it changes by a small amount every month, but there’s no clue on the bill as to why the number changes.Over the last ten months, my basic service charge has hovered around $16 or $17. If this number is not based on how much electricity you used – as I would assume – then it should stay roughly the same for all Con Ed customers. So while the basic service charge might be anywhere between 30 and 35% of my monthly bill, it could be a much lower percentage of my neighbor’s bill.The other big charge is for delivery, which lead to my second realization: a pretty sizable portion of my bill is still based on a variable rate. Con Ed charges for delivery by the kilowatt hour, the same way that they and ESCOs charge for the actual electricity. This isn’t like paying for shipping, however, where the delivery charge is much lower than the price of the object. My average delivery rate was 10.9631¢/kWh, which is actually more than the fixed rate I got from my ESCO. Most of the time, I was actually paying more to get the electricity delivered than to get the electricity.Since they charge by the kilowatt hour, the delivery charge will always take up a portion of your bill that is proportional to your electricity charges. There’s no way to save money on delivery other than using less electricity. For consumers looking to save money by switching to an ESCO, this is frustrating: you only have direct control over the rate of a small portion of your electricity bill.

What would I have done differently?

Despite being disappointed with the results of my switch to an ESCO, I don’t regret the experiment. I still saved money, and eight bucks is still eight bucks.If there’s one thing I would’ve done differently, it would be to adjust my expectations. When I switched to an ESCO last summer, I was expecting to shave up to 10% off my bill every month. That, clearly, did not happen. But it only took ten minutes or so to sign up for a plan via Choose Energy, and spending ten minutes to save eight bucks is a pretty good deal. (Plus, I get to write about it as part of my job, so if you think about it, I actually made money.)I also think I could’ve saved more money by only agreeing to a six month plan and then switching to another, hopefully cheaper, ESCO after those six months. Last summer, Choose Energy told me they were constantly pushing the ESCOs they work with to lower their rates based on customer data. Looking at Choose Energy right now, I’ve already found multiple plans that are cheaper than mine. One is a six month plan at a fixed rate of 9.90¢/kWh. Another is an eighteen month plan at only 10.25¢/kWh. If I had to switch today, I would go with the cheaper, shorter plan, and take my chances that the plans six months from now would be even cheaper, or at least a comparable price.My plan with Constellation ends in two months. When it does, you’ll probably find me back on Choose Energy, looking for a new ESCO to try.