Note: According to an email sent to account holders, Final is closing all accounts "in the coming months." Cards will be turned off by 01/17/18. Rewards, recurring payments, and benefit access will be depreciated accordingly. Final did not respond to a request for comment as of this update.

Which begs the question: why do we use the same credit card number for every site we shop from? When a card is compromised, not only do you have to deal with possible identity theft, but you have to go through and change your card information at every other site, too.

That’s the idea behind Final, intended to be the last credit card you’ll ever need. I got early access to Final’s card a few months ago, and have been generating dozens of new card numbers for my online purchases. I also had a chance to talk to Aaron Frank, CEO at Final, and Alex Cramer, the Director of Delivery, last week about how they built Final and what they have in store for 2017.

Final lets you generate a new credit card number for every website you buy from. If you want, you can automatically disable that number after a single purchase, or you can lock it to a specific merchant.

For heavy online shoppers with a fear of hackers, Final may sound like a dream come true. But for the credit card obsessed, details of the card are likely to make you skeptical. After the first year, Final will charge you a $49 annual fee, and they only offer a 1% flat cashback reward. Plus, if it’s just virtual numbers you’re looking for, both Bank of America and Citi offer a similar feature.

However, Final plans on offering new cards with different fee and rewards structures in 2017, which could answer the concerns above. And, unlike other credit card companies, Final aims to be as customer friendly as possible, which may be attractive to people who are tired of dealing with traditional financial institutions.

In 2014, the founders of Final all had their credit cards independently breached due to various security flaws. Though they started with the idea of putting virtual numbers at the forefront of their card experience, they’re not stopping at just rethinking card security. According Frank and Cramer, Final’s goal is to "rethink the credit card for the modern age."

While Final got started in 2014, it wasn’t until 2016 that they were able to launch their first credit card product, backed by First Bank & Trust. Even now, you can’t just sign up for a Final card the way you can a Discover or Citi or Chase card. Instead, you have to put your name on a waiting list. It’s a pretty long waiting list, in fact – I just signed up with a second email address and was told there are 876,980 people ahead of me.

This isn’t a case of artificial scarcity, however. Final needs to be able to provide a credit line for every new customer they bring on, which means buying debt to cover new customers. Frank and Cramer couldn’t give me a timeline for when they’d be able to offer invites to their entire waiting list.

The main attraction: virtual credit card numbers for every transaction

Right now, there’s basically one reason you’d want to grab a Final credit card: virtual numbers. Using a virtual number for every online transaction is similar to using a unique password at every website: it siloes off your information and makes it harder for hackers to steal the whole pie.

Final makes it easy to generate a new credit card number. When you open up the app on your phone, there’s a big green button right by your thumb that takes you to the virtual card generator. 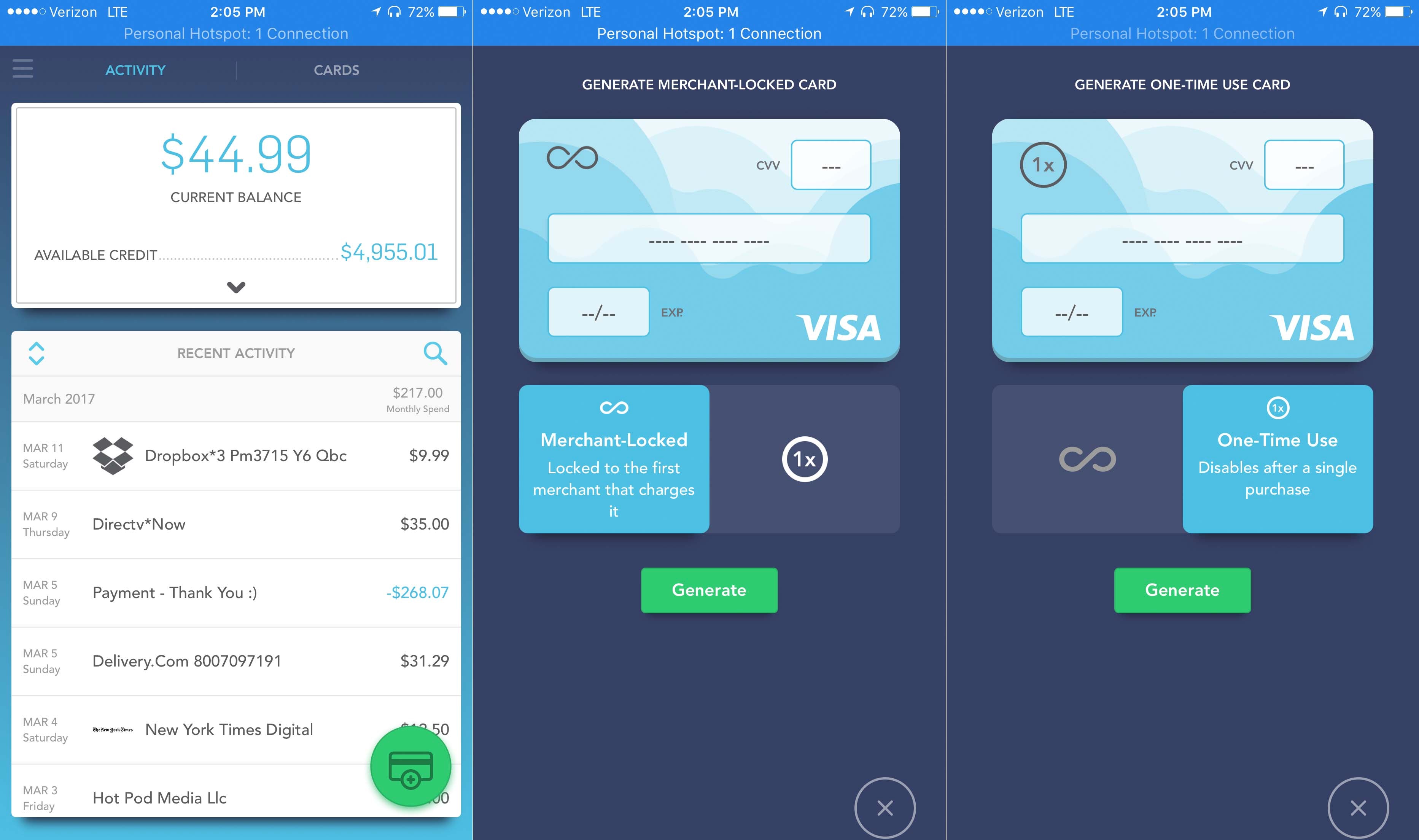 A fun little touch you can see here – for some big companies, Final actually puts their logo in the transaction. They do this on the Cards screen for merchant-locked cards as well.

On this screen, you can choose between a merchant-locked card – which, naturally, is locked to the first merchant that charges it – or a one-time use card that is automatically disabled after a single charge. Once you generate the card, Final provides a credit card number, a CVV, and an expiration date.

At any point after you generate a card, you can go to the "Cards" screen in the app or on the web and disable the card. You can also see every transaction charged to that number, so if The New York Times charges me twice in a month, I’ll be able to easily see it.

Merchant-locked cards are perfect for online subscriptions. If you decide to cancel a subscription, you can also disable the card so that they can’t accidentally charge you for another month. It’s also great for free trials for services that automatically renew, like Blue Apron or Audible. You can pre-emptively disable the card and just change the card information later if you decide you want to renew.

You can generate new cards on the web, too, but I’ve found that I prefer generating them in the app. Most of my online shopping is done on my laptop at work (shh, don’t tell anyone), and it’s easy to have the app open on my phone next to my laptop while I type in the card information.

Because Final puts virtual card numbers at the center of their experience, it’s incredibly easy to both create and manage virtual numbers. The user experience is clear – you always understand exactly what you’re doing – on both the app and the web.

Both Bank of America and Citi offer virtual card features as well. This was news to me – I’ve had a Citi account for years, and I just found out about this feature while doing research on Final. I couldn’t figure out how to access the feature on your normal account page. Instead, I Googled the feature and found myself on this page, which randomly features this image of two very happy white people: 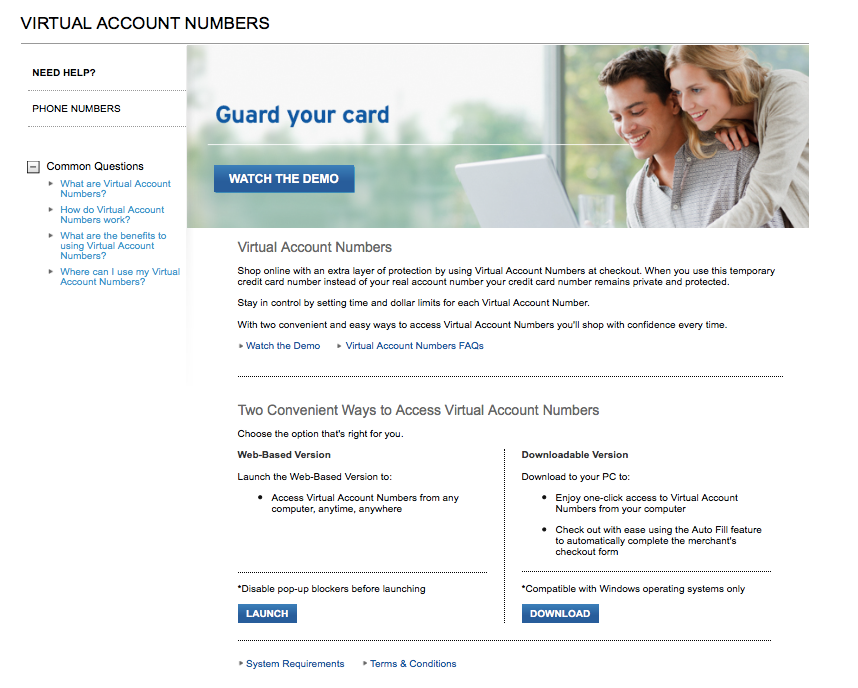 They’re looking at this week’s menu on Blue Apron.

And when I tried to launch the web-based version: 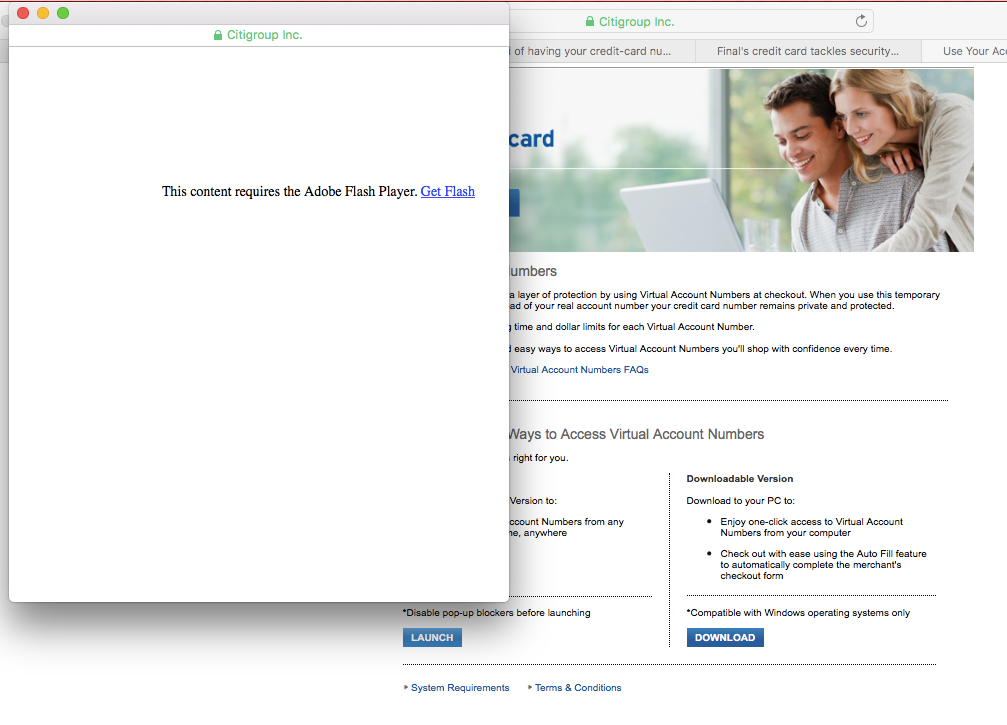 I can almost guarantee you that installing and using Adobe Flash Player is more dangerous than just using the same credit card number at every website you buy something from. Bank of America’s ShopSafe feature also requires Flash, and is, according to one blogger, "challenging" to find on the website.

While Final’s virtual credit card feature is not unique, they are the only credit card company making it a core part of the experience, and it shows. If virtual cards are important to you, Final might as well be your only option at this point.

While Final created a unique experience for digital purposes, its hands were tied when it came to physical payments. That’s because the relatively new "chip" payment method, adopted en mass in the States in 2015, is already one of the most secure ways to pay via a physical credit card. When you use a chip card, the card actually creates a unique transaction code. In effect, it’s the same idea as creating a new card number with your virtual cards.

The problem isn’t really the cards – it’s the merchants. Despite rules enacted in 2015 to encourage business to switch over to chip readers, many merchants still use the outdated magnetic strip. This leaves every credit card open to fraud.

You may wonder, as I did, why Final didn’t try to build something like the Coin – a smart device that could send unique card numbers over the magnetic strip for extra security at outdated merchants. Frank and Cramer told me that building a consumer product like Coin wouldn’t be a good solution for Final, primarily because the devices aren’t always accepted and they need to be charged. Instead, Final is pushing for adoption of contactless EMV – a technology similar to NFC payment methods like Apple Pay, except built into your credit card.

Have you ever heard the saying, "If you’re not paying for a product, you are the product"? According to Frank and Cramer, that’s basically every credit card that doesn’t charge an annual fee. That’s why, after one year free, Final charges a $49 annual fee.

When credit cards don’t charge annual fees, they’re still making money off of you somewhere. It may be a charge for a mistake, like a fee for going over your credit limit (Final doesn’t charge a fee for this, by the way), or by making money off of your debt. Frank and Cramer told me that Final would rather charge you upfront and encourage responsible credit card use.

That’s not the reason most cards charge annual fees, however. If you have a credit card with an annual fee, you probably got it because it has better rewards, like travel bonuses. The rewards you get from a card with an annual fee often exceed the annual fee many times over. While Final’s annual fee is relatively low – other cards charge anywhere from $59 to $95 to $450 per year – it doesn’t offer nearly the same kind of reward structure as other paid cards. Final currently only offers a flat 1% cashback reward, which is stingy by any measure.

Frank and Cramer told me that Final doesn’t want to play the rewards game. They’d rather be thought of as more like American Express than Citibank. Unfortunately, I’m not sure I see the vision. The combination of a $49 annual fee and 1% cashback rewards feels like a compromise, and not necessarily one that best benefits me as a cardholder.

One nice thing about Final’s rewards is that they don’t deal with points or miles. Instead, when you visit the Rewards tab on your account dashboard, you see exactly how much you’ve earned in dollars – no conversion or math necessary.

It’s still early days for Final – the card only launched last year, and there are still hundreds of thousands of people waiting for an invite to apply. While Frank and Cramer couldn’t give me a lot of specifics on what to look forward to, they did say to look out for new consumer-facing features and partnerships that will add value for Final customers. They’re also looking at new products, such as a metal card, that could expand their lineup.

While there’s still a lot to look forward to, Final has built a strong base for future growth and expansion. The website and app experience is the best out of any credit card I’ve used – not a high bar, but still significant – and their virtual cards feature is miles ahead of the competition. Additionally, Final’s focus on being customer friendly has left me feeling personally invested in this account and the company. While I’m not looking forward to paying a $49 annual fee on the card, I’m willing to wait and see what the company has in store before I jump ship.