"What breed is that doggy in the window?"If you’re the pet parent to a mixed-breed dog, you’ve probably wondered what breeds went in to making your dog. You might have even played a little guessing game with it. Is the snout from a Husky or a German Shepherd? Is that the coat of a Bernese? Does she have the personality of an Akita or Shiba Inu?Until recently, the only way to figure out a mixed-breed dog’s ancestry was by looking at the dog’s features. But with the advent of advanced DNA testing, you can see your dog’s detailed family tree. Think of it like looking up your family name on ancestry.com, except instead of looking through documents, you’re sending a cotton swab with your dog’s saliva to a lab.How does dog DNA testing work? And what’s the deal with dog breeds in the first place? Are there any benefits to testing your dog’s DNA besides a fancy family tree? Continue reading for answers to all of those questions and more. 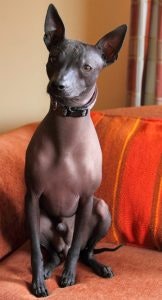 A brief history of dog genetics

The dog has been described as the most diverse species in the world. There are hundreds of dog breeds (184 recognized by the American Kennel Club), and some breeds look radically different than others. How is a dachshund the same species as a golden retriever? How could pitbulls and labradors be part of the same family? And what, exactly, is the deal with the Peruvian Hairless Dog?It turns out that looks aren’t everything. The main distinction between different species is whether or not they can mate and create viable offspring. Despite looking incredibly similar, species within groups like bats and bush babies are genetically incompatible.So why can dog breeds be so diverse and yet still create puppies? One hint comes from a project called CanMap, detailed in this National Geographic article. According to the project, huge differences in the way a dog looks are controlled by just one or two genes. Giving a dog stubby legs is as easy as flipping a switch (metaphorically speaking). This is in stark contrast to human genetics, where a person’s looks are controlled by the delicate interactions between hundreds of genes.Scientists don’t know yet exactly why dog genetics buck the trend, but part of it might be due to aggressive breeding. Ever since human beings figured out they could selectively breed traits a few hundred years ago, they’ve been creating dogs that are good at hunting, guarding, herding, and other important jobs.

Because dog breeds all belong to the same species, they can interbreed. This allows for the creation of "designer breeds" and new breeds by cross-breeding (the labradoodle, a cross between labradors and poodles, is a popular example). It also means that multiple different dog breeds can mate over generations and create mixed-breed dogs.The definition of a mixed-breed dog is pretty simple: any dog that’s not part of a recognized breed. Mixed-breeds can be created in a variety of ways: a purebred can mate with a mixed breed, two different purebreds could mate, or two mixed-breeds can mate. Mixed-breed dogs are incredibly popular in America - one study estimates that they account for 50% of of the U.S. dog population.For centuries, the only way to figure out a mixed-breed’s ancestry was through visual analysis. In other words, "Well, what does it look like?" Visual analysis has some problems, though. The biggest one: most breeders can’t agree on a breed designation when analyzing the same dog. One breeder might tell you a pup is part husky, while another will be adamant that it’s definitely Shiba Inu. Both have years of experience - so which one is right?According to a study by Dr. Victoria Voith, neither. A group of breeders was asked to guess the breeds inherent in various mixed-breed dogs. Less than half of them were able to pick up on the breeds reported by a DNA analysis from Wisdom Panel, which at the time was rated to be 84% accurate.Wisdom Panel claims that its tests are more accurate than professional breeders because of lots and lots of science. Wisdom Panel tested over 13,000 dogs and performed analyses of over 19 million genetic markers. By repeatedly testing multiple dogs from the same breed, Wisdom Panel was able to figure out which genetic markers were unique to which breeds. By testing your dog for these genetic markers, Wisdom Panel can reasonably estimate what percentage of your dog’s DNA came from a specific breed.Wisdom Panel is the most advanced dog DNA test on the market. That’s also because Wisdom Panel is the only dog DNA test on the market - it’s bought out or sued most of its competitors. Other dog DNA tests exist, but for different purposes. The American Kennel Club has a DNA test, but only to prove parentage. Another company, PooPrints, uses a DNA sample to see which community members aren’t picking up their dog’s waste.

Should I test my dog’s DNA?

If you’re curious about your mixed-breed dog’s heritage and want to get the DNA test done, then yes, you should. The Wisdom Panel 2.0 testing kit is $79.99 from their site, though you may be able to find it cheaper at online retailers like Amazon. Compared to the other costs of owning a dog, the DNA testing kit is a cheap way to satisfy your curiosity.There are some possible health benefits to knowing a dog’s breed. We put a big stress on that word possible - there’s no proof that mixed-breed dogs with certain purebred ancestry have higher chances of genetic disease. Ultimately, having a good relationship with a vet that you see once a year is the best way to keep your dog healthy.However, if you’re already getting the test, there’s no harm in knowing what possible genetic diseases your dog might eventually contract. It’s well-known that certain dog breeds are more likely to pass down genetic diseases. For example, if your dog is 50% Great Dane, your vet might want to test for hip dysplasia. In this case, testing your dog’s DNA can lead to catching a disease before it starts.DNA testing can also tell you how big your new puppy is going to get. Some parents of mixed-breed dogs are surprised when their puppy turns out smaller or bigger than they expected. Based on the breeds in your dog’s ancestry, Wisdom Panel believes they can predict your dog’s final size.A puppy’s DNA report can also help predict certain behavioral issues. While every dog is unique, certain breeds will commonly have the same behavioral problems. Being aware of it can help both you and your dog get training before it becomes a real issue.Still, the best reason to get your dog’s DNA tested is curiosity. Curiosity may have killed the cat, but for you and your mixed-breed dog, a little curiosity can go a long way. Why is curiosity the best reason? Despite the benefits listed above, there are major limitations in how useful they can be in medical situations. Don’t get a dog DNA test because you think it’s going to make a major impact in your dog’s medical life. Instead, get it because you want to satiate your curiosity.

We have two office dogs here at PolicyGenius: Ruby (who you might recognize from Pawbamacare) and Nara. We got both of them tested by Wisdom Panel to see what they’re made of. 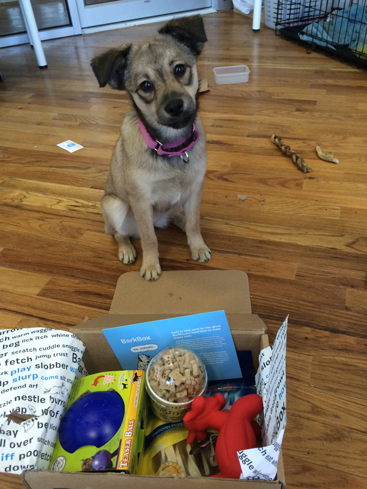 Ruby is a complex mixed-breed dog. And when we say complex, we mean complex. Her full report is a bit of a mess: 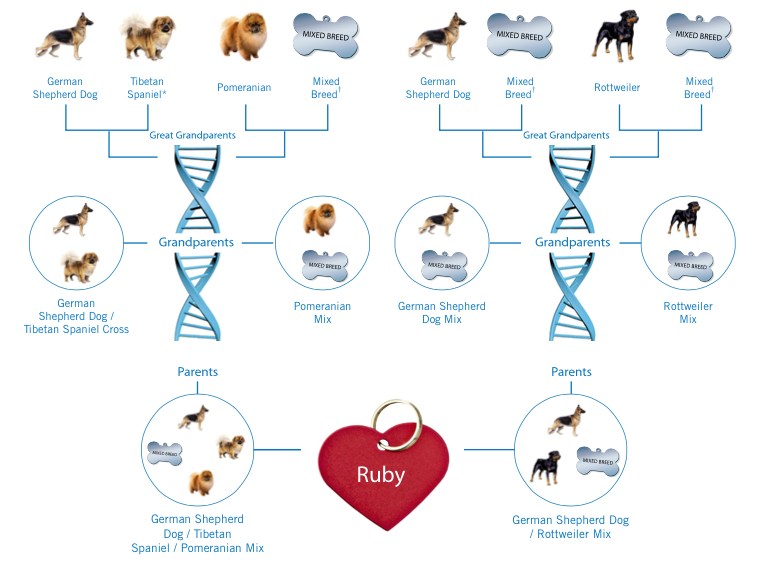 Our CEO, Jennifer Fitzgerald, got Ruby tested "out of curiosity and to see if there were any breed specific issues." In Ruby’s case, health issues would be hard to guess: "she’s a crazy mix."Crazy mix is a bit of an understatement, with the biggest surprise being the Tibetan Spaniel thrown in. Our actual thoughts when we received the results: "What the heck is a Tibetan Spaniel?" But if you look at her face, you can totally see it. That’s something we never would’ve figured out if it weren’t for DNA testing. 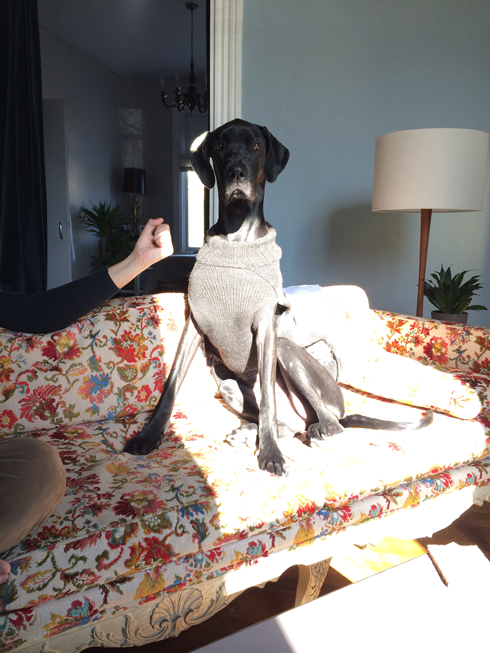 Okay, we know Nara is a Great Dane. We just wanted to confirm, you know? 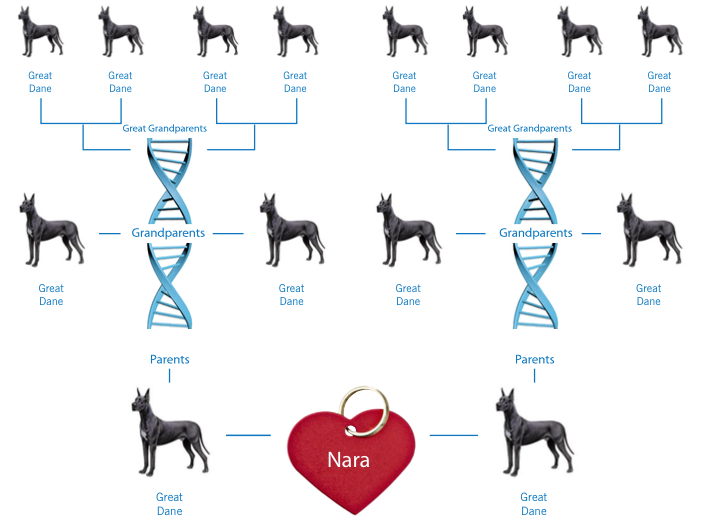 Have you gotten your dog’s DNA tested? We want to hear about your experience. Leave us a comment in the box below.Photo: llee_wu