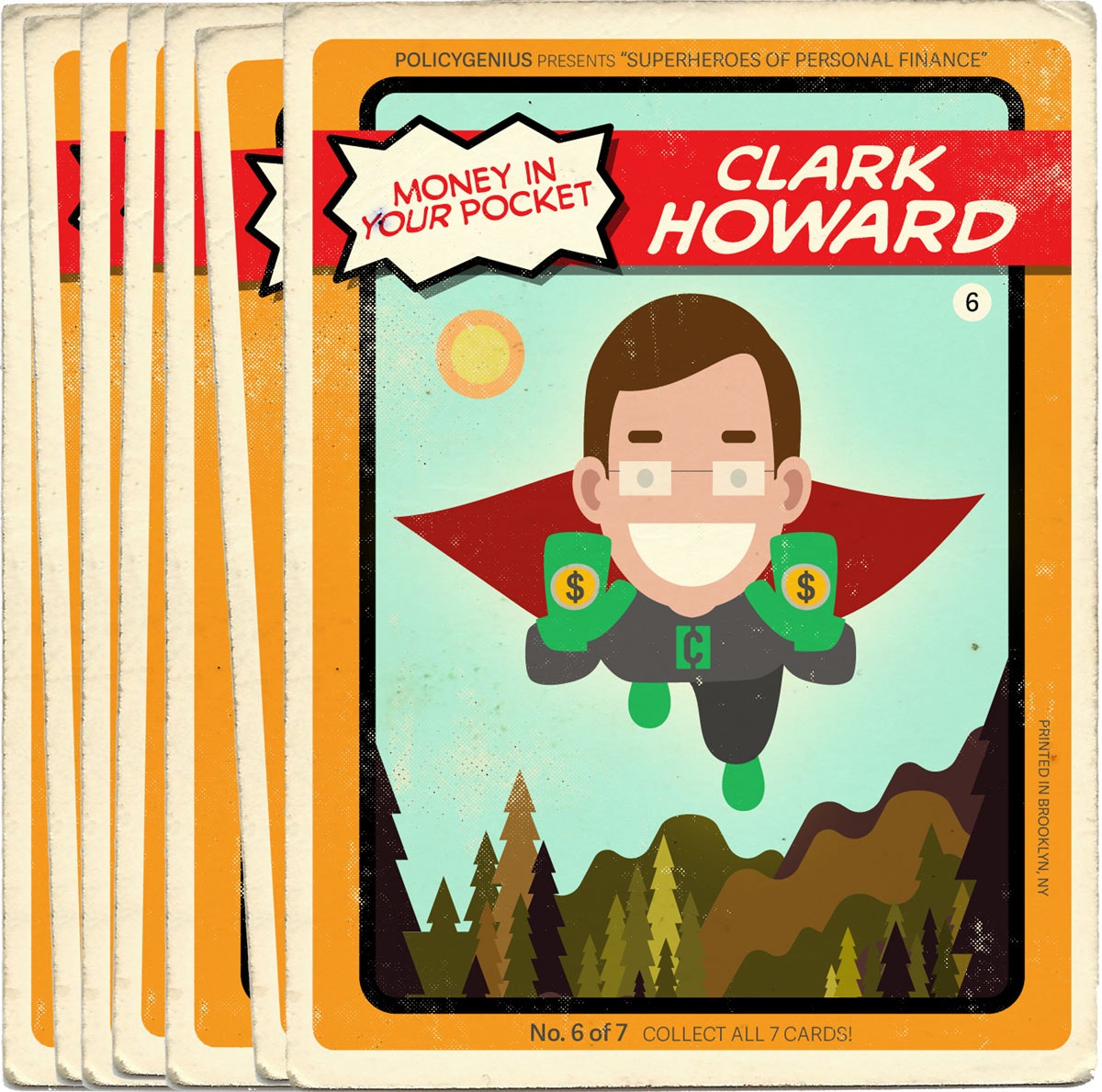 Clark Howard was born in 1955 in Atlanta, Georgia – an area he’s popular in to this day. He attended the Westminster Schools before leaving to attend college at American University.

During his sophomore year, Howard had an experience that shaped his money habits going forward: his father lost his job and his parents didn’t have much in the way of savings. When he went back to school he immediately got a job so he wouldn’t end up in the same situation. He says that he "immediately began to live off of one paycheck and...put the next one into savings." He graduated from American with a BA in Urban Government in 1976 before going on to earn a Master of Business Administration from Central Michigan University the next year.

Howard worked for the government as a civilian employee of the Air Force and in the Department of Housing and Urban Development; after he was finished with school, he owned a travel agency, which he ran successfully enough to retire in 1987. He began appearing in guest segments on radio shows, giving travel advice to listeners. Eventually, his segments grew so popular that he was given his own show, The Clark Howard Show, on WGST-AM. The show became nationally syndicated in 1998, introducing Howard to an audience outside of the Atlanta area.

Howard pivoted away from travel advice and toward general consumer advice; in 1991 he even became a consumer affairs reporter for the local ABC affiliate TV station. In 1993 he founded the Consumer Action Center a helpline that gives advice through its 150 volunteers who come from various financial backgrounds like CPAs, brokers, and lawyers. The Consumer Action Center serves mainly as a call-in hotline where consumers can ask financial questions and receive free advice; the Center also provides online guides for popular topics like investing, credit issues, and shopping for health care.

In addition to his books and radio show, he appears occasionally on various HLN shows and has a weekly "deal spotter" column in the Atlanta Journal-Constitution.

If you’re looking for hard-hitting financial advice that gets into the weeds of, say, investing, you’re better off looking elsewhere. Howard is great for tips on how to make changes to your everyday spending habits, for example, but he doesn’t stray far from that. Even taking a look at his website, you can find a section of posts about mutual and index funds, but the last post under that topic is from October 2, 2015, and there are only four posts there for all of 2015. There’s a ton of accessible information on a host of other topics, but there are better options for money-smart consumers who are ready to take the leap into more advanced financial products.

Clark Howard’s big battle is against overspending. Seeing as he comes from a background of consumer advocacy, his fights typically revolve around two things: avoiding rip offs and shopping around for the best value.Howard has an entire section of his site dedicated to scams and rip offs. The topics range from protecting yourself online by avoiding phishing scams, to tax fraud warnings, to how to deal with unexpected charges on a hotel bill. If there’s a story in the news about identity theft, your cheese being made out of wood, grocery store marketing tricks, or anything else that can cost you money, you can bet that not only is Howard reporting on it, but he’s giving tips on what you can do to protect yourself and your family.

When it comes to buying products, Howard doesn’t necessarily believe in only finding the cheapest price. Other personal finance experts, especially those who focus strongly on getting out of debt, will tell people to just stop spending, find the items at the lowest-cost, and so on. Howard, though, preaches getting a good value for things. Price doesn’t always correlate with value, so an item with a lower cost doesn’t mean it’s of poorer quality; at the same time, it can make sense to pay a little more for an item that will last longer and save you money in the long run.

Howard doesn’t like when people don’t control their money. He’s not a big fan of debit cards, because, as he says, they have "become the enemy of the person who doesn't know where their money goes." He recommends that people do something as simple and low-tech as carry around a small spiral notebook to write down transactions. If you’re not tracking your money, you’re not handling it the right way.

Customer service is also an area where Howard takes a strong stance. His forums have sections for both good and bad customer service stories. But his opinion on this isn’t just about a good shopping experience. It ties back to his thoughts on getting ripped off and, ultimately handling your money. If there’s a problem with a product or company that costs you money, their level of customer service can have a big impact on how quickly you get that money back and how soon (and how satisfactorily) they resolve the issue for you – and you know whether or not you should give them your money in the future.

The Clark Howard Show is one of the most popular financial advice radio shows in the country. If you’re not able to listen live, you can stream segments on his site or download the podcast for 21st century listening.

Howard also has several books that touch on different areas of finance. Big Book of Bargains shows ways to save on day-to-day purchases like food and clothing; Clark Smart Parents, Clark Smart Kids is all about how parents can introduce their children to money, from allowance up to buying their first car; Clark Smart Real Estate teaches how to invest in and build wealth through real estate; and Living Large In Lean Times focuses on small ways to save money: cutting electric bills, finding coupons, and getting the best plans for your cell phone.

Howard’s most recent book, Living Large For The Long Haul, came out in 2013 in the wake of the recession and highlighted people who weathered that storm and people who suffered in what he calls "our new paradigm".