How death can haunt (or help) your house hunt Frank Hewitt had been looking for a condo in San Diego for a while by January 2006, when he found a unit that had languished on the market for more than 120 days. He toured the condo with a seller's agent. The price seemed comparable to other condos in the neighborhood, San Diego's Little Italy.

So Hewitt asked the agent: Why hasn't this unit sold yet?

Legally, the agent said, he needed to disclose something. The previous owner died in the condo. Most people weren't comfortable with that.

But don't worry, the agent said to Hewitt. He had a priest bless the condo. The agent wouldn't say how the owner died, but said it wasn't violent.

"I recall putting in a low-ball offer well below ask," Hewitt said.

After a few counter-offers, Hewitt settled for a price $25,000 less than the asking price. This was just before the housing market peaked, when most property was going for full price, if not higher.

As it turns out, the plot point of an endless number of horror movies and one notable TV show is true: Death can have a big impact on a property's value.

Is there a death discount for homes?

A 10% to 25% discount is typical for houses where people have died, said Randall Bell, CEO of Landmark Research Group. Bell specializes in appraising damaged properties, including those affected by crimes. His portfolio includes the Heaven's Gate house, where 38 cult members committed mass suicide in 1997, and the mansion where O.J. Simpson's ex-wife Nicole Brown Simpson was murdered.

Depending on the circumstances, a death in the property can sink a house's value for years, Bell said. Sellers can take some measures to prop up the value. Most importantly, they should clean up the house. It's common sense, but Bell has appraised properties that still had bullet holes.

Sellers should at least try to put a good face on a house with a dark history, he said. Some sellers change the house number to hide a property's past. Bell recommended this to the sellers of the Simpson house, but it usually doesn't work.

Do sellers have to tell anyone about a death?

Fifteen states require sellers to fess up if a buyer asks about a death. The remaining 32 states have no requirement, Condrey said.

Condrey founded Diedinhouse.com to help people find out about deaths in the places they live. The South Carolina resident owns rental properties and in 2012, a tenant texted him to say her house was haunted. He had not dealt with this issue as a landlord before.

He wanted to find out whether someone had died in the house, but found few resources. So Condrey, who also works as a project manager for a software company, created the resource himself. After all, buyers typically have the right to know whether the roof needs replacing or there's a crack in the foundation. But those things can be fixed.

"You can never remove the fact that there was a murder-suicide in the house," Condrey said.

Condrey feels people should at least know if a home has a dark past.

"You want to know all the information that you can about this house before you buy it," he said. "No matter how you feel about this topic, if you move in and learn after the fact, you're going to wish you knew."

A search for a single property on Diedinhouse.com costs $11.99. Condrey initially wanted the site to be free, but the data he sought and the servers to run the site cost money. For your fee, you get records of any deaths, plus whether the property was ever a meth lab, ever had a fire or housed a sex offender, as well as sales and tax information. Most of the data is from after 1985.

Since its founding in 2013, Diedinhouse.com has become a more comprehensive home history reporting site, but Condrey hasn't forgotten its roots.

The site has records on 5 million deaths in houses and is adding about half a million each year, Condrey said. He never did find any information on the house his tenant thought was haunted, but after starting the site, found a married couple had died in one of his other properties. Condrey told his tenant after finding out. It didn't bother the tenant. But not knowing a house's history can lead to some unwelcome surprises.

Case in point: 1120 Westchester Place, Los Angeles, California is known as the Rosenheim Mansion, after its architect Alfred Rosenheim. It's been the setting for many Hollywood productions, including "Buffy the Vampire Slayer" and "Law & Order: SVU." But most recently, in 2011, it served as the eponymous setting of "American Horror Story: Murder House."

No one was actually murdered there. But the house has become as notorious as if someone were. Dr. Ernst Von Schwarz and Pier Angela Oakenfold moved there in March 2015.

Since then, they allege, "hundreds" of American Horror Story fans have tried to get onto the property and into the house.

"A certain segment of fans of this show have a macabre and twisted interest in getting into the home and on the property," said Douglas B. Vanderpool, an attorney for Von Schwarz and Oakenfold. 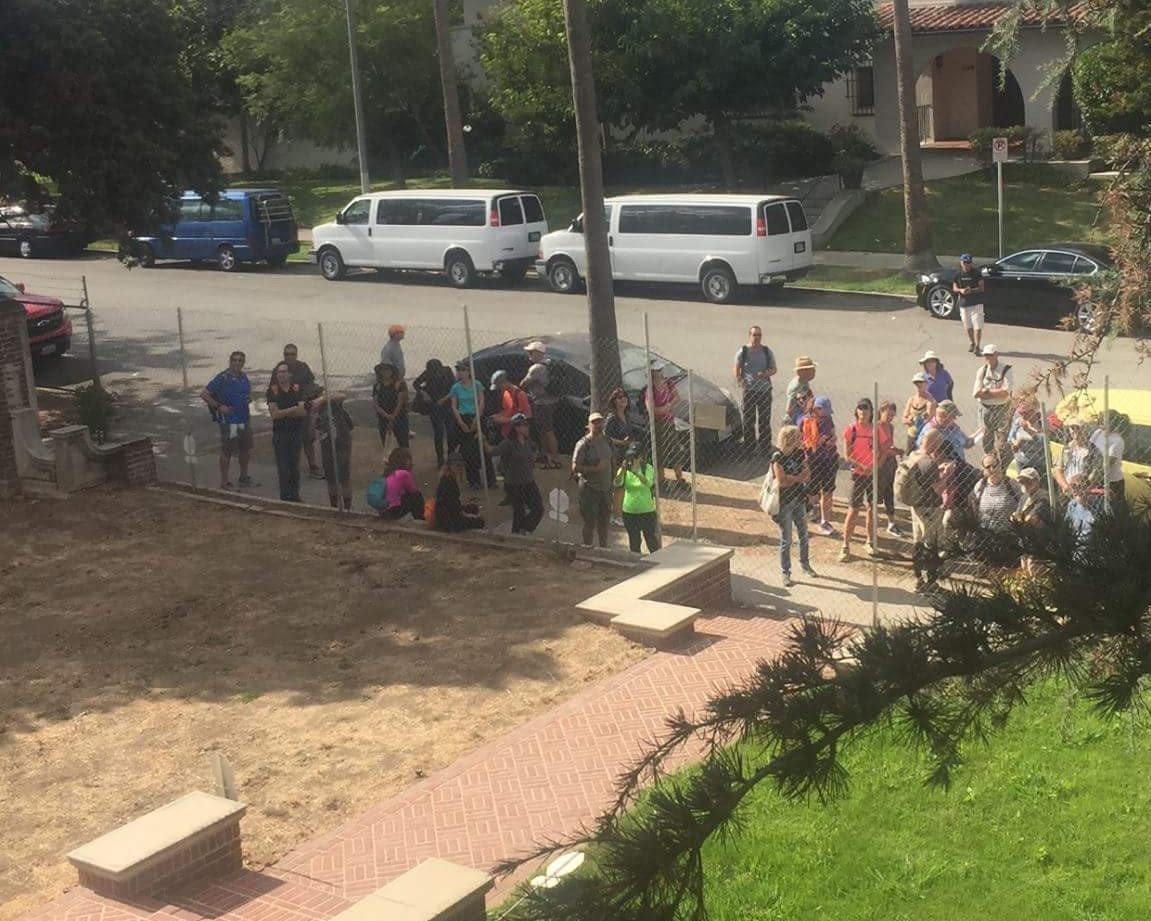 Crowds gather outside the Rosenheim Mansion, also known as the "Murder House." (Photo courtesy of Douglas B. Vanderpool)

California requires sellers to not only disclose deaths, but anything that might affect the value of the property.

"Basically anything that buyer might want to know that would factor into his or her decision when they buy the property," Vanderpool said.

Von Schwarz and Oakenfold allege in a lawsuit that the sellers and the real estate agent failed to disclose the frequent fan visits. Vanderpool said fans sleep outside and regularly trespass. The suit names Coldwell Banker, real estate agents Stephan Apelian and Joyce Rey, the estate of seller Greta Von Steinbauer and unnamed fans of American Horror Story. Coldwell Banker, Apelian and Rey denied any wrongdoing and said they "disclosed all material facts" related to the transaction.

Vanderpool said his clients want to keep living in the house, but want to be reimbursed for the cost of getting a variance for a taller fence, hiring security and the loss of value.

"They're not in this to make some money," Vanderpool said. "They're in this to be made whole."

But being associated with murder doesn't always doom a house. Cindy (who asked that we not use her last name to protect her privacy), moved into the Dumont, New Jersey, home of Richard Kuklinski after his arrest in 1986. Kuklinski, also known as the Iceman, claimed to have killed up to 100 people as a Mafia hit man.

Cindy, who was pregnant at the time, and her husband were looking for a bigger house. Their real estate agent explained that nothing happened in the home.

"He never brought his work home, so to speak," Cindy said.

Cindy and her husband asked for, and received, a discount, mostly because the house needed work. She and her family lived there for 30 years, most of them uneventful, aside from a few visits from documentary crews. Her husband died a few years ago and her son is looking to move out, so Cindy plans to downsize in the near future. She doesn't plan to bring up the previous owners when she sells.

"It's nothing worth mentioning as far as I'm concerned," she said.

Frank Hewitt lived in his San Diego condo for eight years without incident, despite knowing someone had died there. Except for one issue: His girlfriend moved in a few years after he bought the condo.

Hewitt hadn't told her about the death.

"She was none too pleased and actually not able to sleep there for a good week," Hewitt said.

But she realized she had been living there for months without a problem and was only mad at Hewitt for not telling her, Hewitt said. She came back and has since become Hewitt's wife.

Hewitt lived at the condo long enough that he didn't have to mention the death under California law when he sold it in 2016. He made a 20% profit. Hewitt wouldn't hesitate to buy another property where someone died.

"While I would never advocate for taking advantage of a loved one's loss, the reality is the real estate is only worth what someone else is willing to pay for it," Hewitt said. "If a death in that home creates a perceived depreciation in value, I am happy to offer far less than I would otherwise."

If you or anyone you know is experiencing suicidal thoughts please call the National Suicide Hotline at 1-800-273-8255 or contact them online.