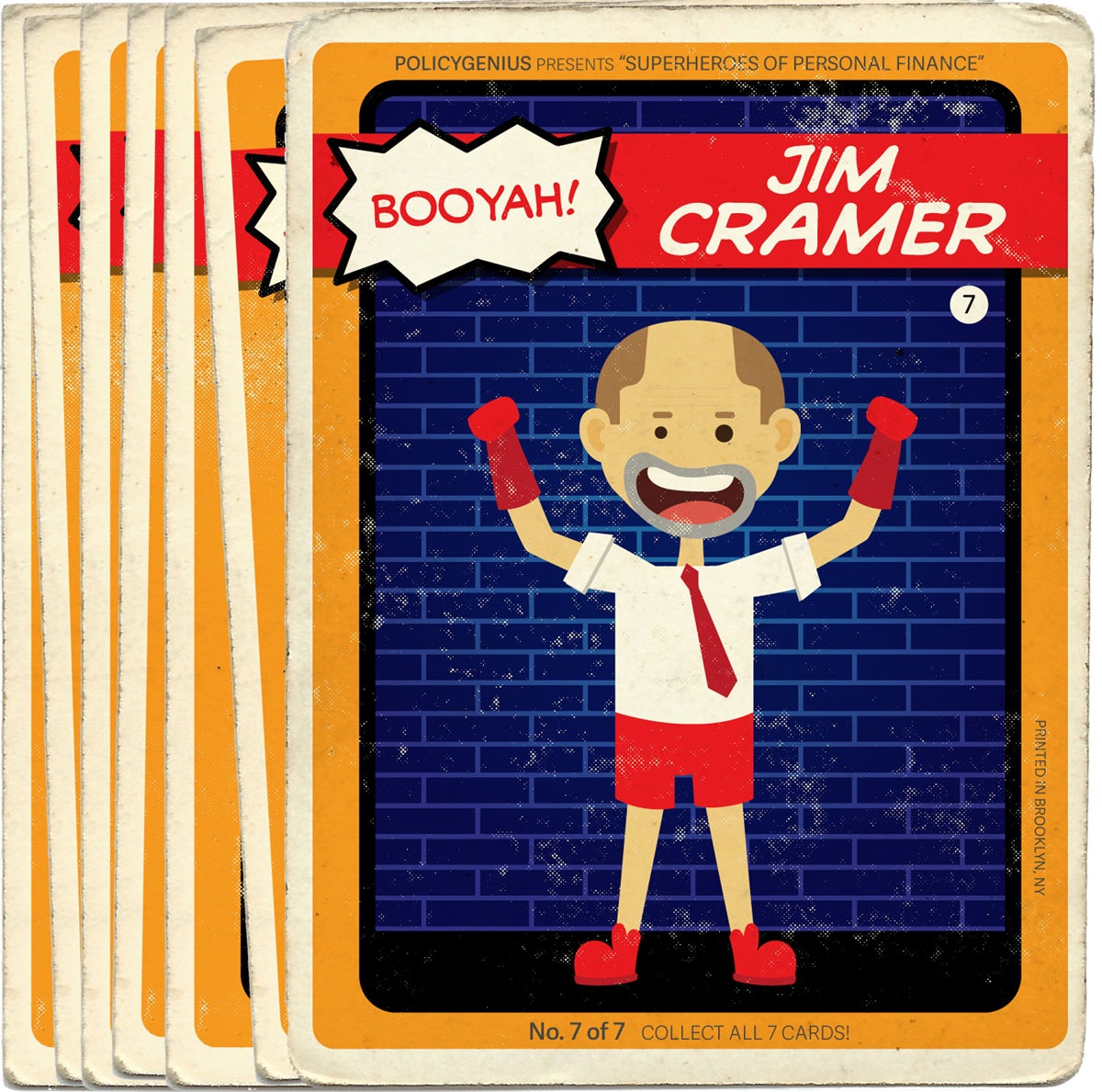 Jim Cramer, the guy who shouts advice about the stock market on TV, emerged as one of pop culture’s most public faces of finance by the mid-2000s, first as the hyper-aggressive market advisor who threw chairs across the studio, and then as an easy target of ridicule and anger after the 2008 meltdown. Eight years later he’s still going strong, offering passionate but well-reasoned advice not just on what stocks to buy or sell, but more importantly—and this is the real reason he’s a financial superhero—on how to think like an investor.James J. Cramer was born to an artist and a wrapping paper magnate in Philadelphia in 1955, and he learned to shout at an early age while working at Veterans Stadium, where he sold ice cream to Phillies fans at home games.He attended Harvard College and was President of the college newspaper The Harvard Crimson. After graduation, he spent a few years as a journalist, first in Florida, then Los Angeles. Eventually, he returned to the east coast and enrolled in Harvard Law School.

Cramer continued to write professionally while he worked on his law degree, and for fun he would save stock picks on his answering machine so others could call in to hear his advice. This is how the editor of The New Republic, who was calling about a writing assignment, learned that Jim Cramer also happened to be pretty good with the stock market. He asked the 27-year-old Cramer to manage half a million dollars—and suddenly Jim Cramer the financial expert was born.Cramer took a job at Goldman Sachs, then left after a few years to start his own hedge fund, which he ran from 1988 to 2000, and which by all public accounts (there’s no way to independently audit it) was enormously successful, averaging a 24% return annually while he was managing it. He poured his life into the fund, and in his off time worked as a contributing columnist for Smart Money magazine and co-founded the investment advice website TheStreet.com.He also developed a reputation as a complete jerk; a 2011 New York Times profile notes that by the late 90s, "Cramer was notorious for profanely abusing his subordinates, stabbing friends in the back and using his media connections to enhance his many interests and mock his many rivals."

By 2000, the nonstop stress was taking a toll on both his physical and mental well-being, and in 2001 Cramer gave up the hedge fund and began to focus more attention on his budding cable TV career with CNBC, first as a talking head and then as co-host on various programs. In 2005, the network launched the show that truly made him into a household name, Mad Money with Jim Cramer, which still airs every weekday.

Although he’s toned down the crazy in recent years, Cramer has always been known for his hyperkinetic, red-faced presentation style, particularly on his show Mad Money, where he immediately set himself apart from other market commentary and financial advice shows by throwing chairs, shouting, and tearing the head off a toy bull.

Reporters and colleagues use words like "vaudevillian" and "provocateur" to describe him, and Business Week described his show as "Louis Rukeyser meets televangelism meets Pee-wee’s Playhouse."

But this is intentional, Cramer argues, telling the New York Times that "The entertainment aspect is really vital, because this stuff is dense and dry."

He continues with this argument on the official Mad Money website About page:

"I sometimes play a clown, too, and I'm proud of it. I can't teach if you're not watching. So even though the purists think I can't be rigorous because I have sound effects and props, I'm going to keep up the humor, keep up the education and keep trying to help you make money for as long as they let me."

Some money experts have embarrassing financial pasts that they try to explain away in their bios, usually by framing them as turning points or epiphanies that eventually made them stronger and smarter. By contrast, Cramer started off as the real deal, successfully running a hedge-fund for 12 years before walking away and transforming into the pop culture version of himself we see today.

Okay, so how successful? The hedge-fund was about $450 million, and it reported one year of negative returns during the entire time Cramer ran it. Cramer says he averaged a 24% annual return and took home $10 million annually in personal profits during that era.

Of course, managing a successful hedge fund isn't easy to pull off or easy to replicate for the average joe. Cramer got started with a $500,000 check from an editor impressed with his innate way of looking at the market. Cramer says he walked away because of the toll it was taking on his health: "In my last year I had to make more than $425,000 a day just to maintain my record." And some of his methods are questionable both from an ethical standpoint and in how realistic it is that a beginning investor not connected to the media would be able to pull them off—for example, Cramer would buy a lot of stock in a company right before writing about it in his Smart Money article, which would then drive the price higher. (After he made an extra $1 million doing this with a single column, the magazine changed their contributor rules in 1995 to curb such behavior.)

"My job is not to tell you what to think," he writes on the Mad Money About page, "But to teach you how to think about the market like a pro." He says he’s not here to give you tips—"tips are for waiters"—but "I come out every night to help level the playing field, so you can try to have a fighting chance against the big boys, the fat-cat hedge fund managers who think they own the market."

Big boys, fat cats, "as long as they let me"—it all comes across as fairly by-the-numbers sales shtick from a veteran salesman, but to his credit, he’s been banging this same drum since his days as a Smart Money columnist in the mid-90s, and unlike a lot of personal finance gurus Cramer doesn’t offer expensive courses in financial miracles or prepaid credit cards. (TheStreet.com does offer paid membership tiers, but they don’t depend exclusively on Jim Cramer’s contribution.)

Of course, sometimes he does offer tips, but these aren’t meant to be the reason you tune in. "I have my opinions about stocks and I happily share them. But all of that is ancillary to educating you about the market."

Ultimately, Cramer is still an insider with an insider’s understanding of how the market works, and that’s his strength. "My job is to make sure you have not just the facts, but also the rules – and those rules are always changing."

The faceless, man-made beast that can undermine all of Jim Cramer’s advice, and even his reputation, is also what he’s built a career talking about: the stock market. Everyone knows how volatile it can be, and how hard it can be to prepare for any possible event. The financial meltdown in 2008 made a lot of small time investors furious about being misled, and they demanded some accountability. Unfortunately for Cramer, his position at the top of the media landscape made him a perfect whipping boy for pundits and journalists. This probably reached its nadir when Jon Stewart came after him (video below) over some spectacularly unfortunate advice he gave to viewers back then.

Cramer thinks that fund managers and institutional money managers don’t play fair. They know all the rules, and they have huge amounts of cash to play with, and they use both of these things to manipulate the market for their own gain. A small-time investor just getting started doesn’t have a chance, especially if she follows the old-fashioned "buy and hold" strategy offered to beginners.

"Like it or not," Cramer writes, "When you invest, you're sitting down to play a game of Monopoly against a bunch of major, big-shot money managers." He wants to make sure you understand the underlying rules of the game, and that you know when the rules change so that you can adapt.

Like every good superhero of personal finance, Jim Cramer is always there, one way or another, whenever you need him.The easiest way to find Jim Cramer is to tune in to CNBC every Monday through Friday. If you're a morning person, check out Squawk on the Street each weekday at 9am ET, where Cramer and a handful of other CNBC commentators cover the day's market performance from the floor of the New York Stock Exchange. If you're an after-work viewer, check out the show that made him famous, Mad Money, every weekday at 6pm or 7pm ET (CNBC lists different times on its website).If you miss his show, you can still listen the day after via podcast (check iTunes) or online at Stitcher.Or you can visit the Cramer side of TheStreet day or night for fresh recaps of the most recent market performance.Jim Cramer has published 7 books over the past couple of decades, and there are specific titles you should start with depending on what you want to know.

If you want more insight into his hedge fund days of the 80s and 90s, and learn what it was like to spend every waking moment working the market to earn more money, try his 2002 memoir Confessions of a Street Addict. If you want a good intro to the stock market that's an easy read, give his 2006 Jim Cramer's Real Money: Sane Investing in an Insane World a try. For a more current take on the market and how it's been transformed over the past decade by things like trading bots and hard to understand algorithms, read his more subdued but still straightforward 2014 book, Jim Cramer's Get Rich Carefully.If you don't want to buy a book and can't find them at your library, there are also some free ebooks (which could be more like pamphlets, let's be honest) available through his website TheStreet.com. To get them, you'll have to sign up to their newsletter list.

If you want more exclusive access to Cramer's insights as well as those of other financial experts, TheStreet.com offers a dozen or so different membership programs to choose from. Real Money ($3/week) and Real Money Pro ($16/week) are your best bets.