The cost of homeowners insurance in New York is $1,188 a year for the average amount of coverage. New York residents can compare rates from 13 different companies with Policygenius.

Homeowners insurance is invaluable financial protection in the event your home is damaged, burglarized, or you’re held liable for an accident. If you’re one of the nearly 54% of New York residents who owns a home, you’re going to need homeowners insurance to protect your home and fulfill your mortgage requirements.

The statewide average cost of homeowners insurance in New York is $1,188, making New York a relatively cheap state to insure your home, especially when you consider that the average premium nationwide is $1,633, according to Policygenius data. Bear in mind that premiums for Empire State residents will vary based on specific factors related to your home and policy. Your rates will be directly impacted by your home’s condition and style of build, its location, your credit and claims history, and your policy deductible amount. Rates will also be different from company to company for the same level of coverage, which is why it’s so important to compare policies from different companies — that’s where we come in.

To help simplify your shopping experience, Policygenius reviewed the five best homeowners insurance companies in New York offered through our website. We also calculated the average rate for several companies offered through Policygenius, the cheapest and most expensive cities in New York for home insurance, and the average cost for each level of coverage based on hundreds of submitted quotes.

Using that criteria, we determined the following five companies were the best homeowners insurance companies in New York. Read about our methodology here.

Velocity provides the cheapest New York home insurance quote of any Policygenius partnering carrier, according to our data. The average quote with Velocity is $753 for around $300,000 in dwelling coverage, which is over $400 dollars cheaper than the statewide annual average of $1,188. New York residents looking for great coverage at a relatively low cost should consider homeowners insurance with Velocity.

New York residents looking to maximize coverage to protect against natural disasters and any unexpected surge in rebuild costs should consider Encompass. Encompass has three comprehensive tiers of coverage, and the two highest coverage tiers include guaranteed replacement cost, a policy add-on that will pay out a full rebuild of your home back to its prior condition, regardless of the expense.

New York residents looking for home insurance savings should look no further than State Auto, a company that offers a total of nine available discounts for everything from bundling your home and auto insurance to fitting your house with smart home devices to fortified home discounts. New York residents whose homes are built to withstand the state’s high risk of hurricanes, tornadoes and hailstorms should take advantage of these valuable rate-saving opportunities.

New York residents with high-value homes should consider a homeowners insurance policy with Chubb. This luxury insurance company provides guaranteed replacement cost dwelling coverage, replacement cost coverage on all personal property, and additional services like a property manager if you have a vacation or secondary home in a coastal county of New York. Keep in mind that Chubb only covers homes with an insured value north of $1 million.

Average cost of homeowners insurance in New York by company

When comparing insurance companies, New York residents may find that rates differ greatly from company to company for the same level of coverage. Higher-priced policies may include coverage add-ons or have higher limits than other plans, or they may cost more simply because that insurer charges more for coverage in that particular location.

Average cost of home insurance in New York by city

Insurance companies will also price policies differently based on where you live. We found that the town of Huntington on Long Island has the highest rates in the state with a $3,009 average annual premium for $100,000-500,000 in coverage. The area with the cheapest rates in the Empire State is Cheektowaga in suburban Buffalo, with an average annual premium of $456 for the same amount of coverage.

We selected the 20 largest cities in New York by population where customers have submitted quotes with Policygenius. Quotes are based on a coverage amount between $100,000 and 500,000.

The cheapest cities for homeowners insurance in New York 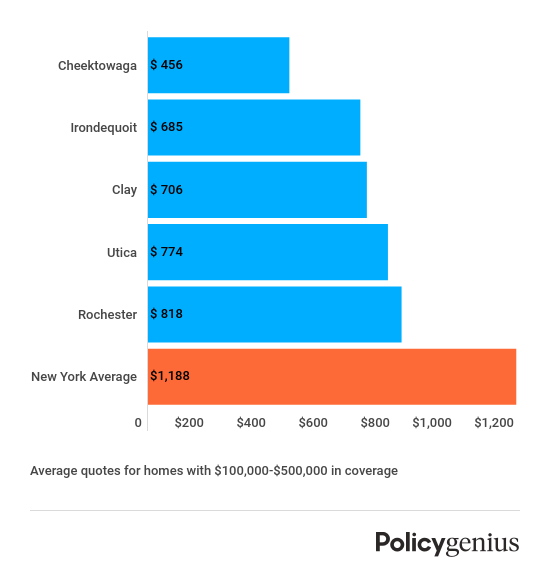 The most expensive cities for homeowners insurance in New York 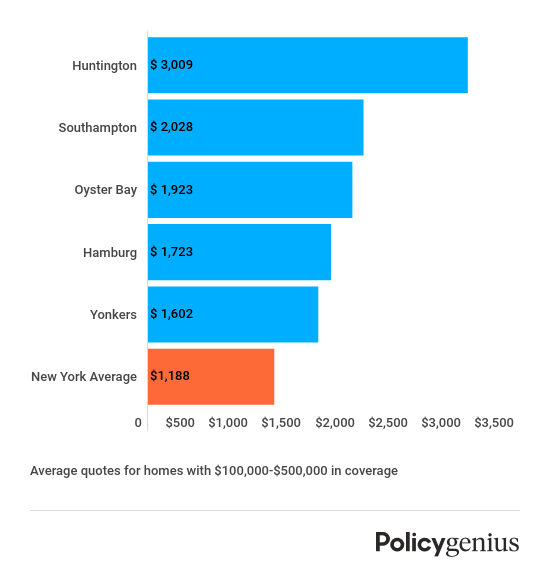 New York has a diverse climate that can experience extremes in all four seasons. During the summer, it can get so hot downstate that hot-weather power outages are not uncommon. During the winter, nor’easters, polar vortexes, and snow squalls, are all common weather conditions.

The Tri-State area is also no stranger to tropical storms, as evidenced by 2012’s Hurricane Sandy, one of the most expensive natural disasters ever. Residents of Long Island, Staten Island, Queens County, and Kings County may have to pay a separate windstorm deductible in the event of wind damage to their homes. The deductible is usually anywhere from 1% to 5% of your home’s insured value, or your dwelling coverage limit. Windstorm deductibles started becoming gradually implemented after Hurricane Andrew in 1992 and have become commonplace across the state since Hurricane Sandy in 2012.

If you’re a coastal-area homeowner and you’re dropped from your policy or you’re unable to find coverage on the open market, you can obtain coverage through the Coastal Market Assistance Program, or C-MAP.

Homeowners insurance does not cover flood damage in New York or any of the other 49 states. New York residents can supplement that gap in coverage by purchasing a flood insurance policy. Flood insurance can typically be purchased through the same insurance company that insures your home.

The New York Department of Financial Services is a valuable resource for New York homeowners purchasing coverage for the first time and those who are already insured. The NYDFS website has helpful information about what to prioritize when selecting your coverage, comparing rates and preparing your home for bad weather. You can even file a complaint with the NYDFS if you’re unhappy with your home insurance company.

If you’re struggling to find coverage, you can get last-resort coverage via a New York Fair Access to Insurance Requirements (FAIR) Plan. The New York FAIR Plan is a not-for-profit insurance association that provides basic coverage for New York residents who are unable to get home insurance on the open market. To qualify for a FAIR Plan, you need to demonstrate that you’ve had at least three unsuccessful attempts to buy insurance from other companies.

Pat Howard is a homeowners insurance editor at Policygenius in New York City. He has written extensively about home insurance cost, coverage, and companies since 2018, and his insights have been featured on Investopedia, Lifehacker, MSN, Zola, HerMoney, and Property Casualty 360.