The cost of homeowners insurance in Utah is $868 a year for the average amount of coverage. Utah residents can compare rates from multiple companies with Policygenius.

The statewide average cost of homeowners insurance in Utah is $868 per year, but policy premiums can differ greatly based on specific factors related to your home and the details of your policy.

Your rates will be directly impacted by your home’s condition and style of build, its location, your credit and claims history, and your policy deductible amount. Rates also vary from company to company for the same level of coverage, which is why it’s so important to compare policies from different companies — that’s where we come in.

To help simplify your shopping experience, Policygenius reviewed the five best homeowners insurance companies in Utah offered through our website. We also calculated the cheapest and most expensive cities in Utah for home insurance based on hundreds of submitted quotes.

Your house is your most valuable asset, so you want a homeowners insurance company that not only offers affordable rates, but also good customer service and high claims satisfaction. It’s smart to do a little research on the company that will be insuring your house and all of your belongings. A great homeowners insurance company is financially stable, has dependable customer service, affordable coverage, flexible policy options, and high quality discounts.

Using those benchmarks, we determined the following five companies were the best homeowners insurance companies in Utah. Read about our methodology here.

Stillwater provides the cheapest Utah home insurance quote of any Policygenius partner carrier. The average quote with Stillwater is $660 for $100,000–500,000 in coverage, which is over $200 cheaper than the statewide average of $868. If you’re an Utah homeowner looking for a budget pick, Stillwater may be your best bet.

Utah residents can insure their homes with Encompass, a company with coverage as good as any company we’ve reviewed. Encompass has three separate coverage packages that include all of the primary coverages you find in a standard home insurance policy, as well as several coverage enhancements and policy add-ons like replacement cost coverage, water backup protection, identity theft protection, fine art protection, and more.

If you’re looking to maximize coverage for the structure of your home, Safeco is the way to go. Safeco has four comprehensive tiers of coverage, and all include the option to add extended replacement cost, a policy add-on that increases your home’s coverage limits an additional 25% or 50% if rebuild costs exceed your dwelling coverage amount. Safeco’s “Premier Plan”, its highest level of coverage, includes guaranteed replacement cost, which pays for a rebuild of your home regardless of the price. With its excellent replacement cost coverage options, Safeco may be your best bet against severe property damage from wildfires.

If you’re a Utah homeowner looking to get a fast quote online, Hippo may be the way to go. The application process with Hippo is faster than any other carrier in Utah that we’ve reviewed. You’re promised a quote in 60 seconds, but depending on your home’s details it may be even faster. To apply, all you do is type in your address, and Hippo almost instantly gives you an estimate along with information about your home’s specs.

When it comes to your home, you want an insurer that is reliable and trustworthy. A.M. Best is the most reliable credit-rating tool policyholders can use to gauge the financial health of a particular company. A good score with A.M. Best means a company is more likely to fulfill their financial obligation to you when it comes time to file a claim. With a score of A+, Progressive has close to the highest rating a company can receive from A.M. Best.

Average cost of homeowners insurance in Utah by company

When comparing insurance companies, Utah residents may find that rates differ greatly from company to company for the same level of coverage. A more expensive policy may provide more coverage add-ons in a basic plan than their competitors, but some companies may simply charge more for coverage in certain areas than others.

Average cost of home insurance in Utah by coverage amount

Average cost of home insurance in Utah by city

Insurance companies will also price policies differently based on where you live. We found Logan has the lowest rates in the state with a $663 average annual premium for $100,000-500,000 in coverage. The most expensive area on average is Draper, located in the southeast corner of Salt Lake Valley, with an average annual premium of $1,464.

We selected the 20 largest cities in Utah by population where customers have submitted quotes with Policygenius. Quotes are based on a coverage amount between $100,000 and 500,000.

The cheapest cities for homeowners insurance in Utah 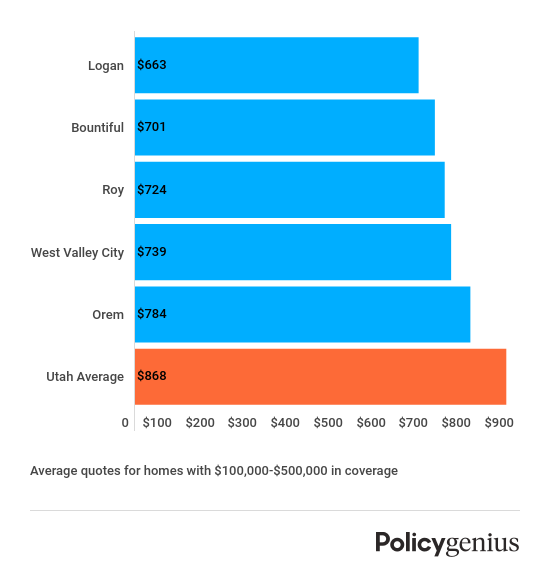 The most expensive cities for homeowners insurance in Utah 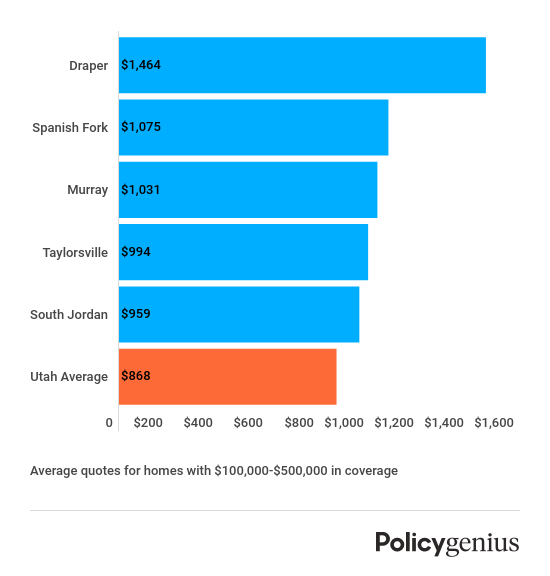 Guide to homeowners insurance in Utah

When shopping for homeowners insurance, Utah residents should keep the state’s heavy snowfall in mind. In February 2020, the state saw a record breaking amount of snow, with some areas of the state reaching up to nearly nine inches in snow in one day.

Although homeowners insurance does cover repairs if the weight of snow and ice causes your roof to fall through or damages your foundation, homeowners should try to keep their roofs clear of ice dams and excessive snow.

Utah residents may also experience earthquakes, which standard homeowners insurance does not cover. Utah homeowners who live near a fault line should consider purchasing an earthquake insurance policy in addition to their homeowners policy.

As with other states located in the Western United States, climate change is causing an increase in wildfires in Utah, with some fires burning over 1,000 acres of land. Homeowners insurance does cover fire damage, but if you live in a high fire risk area, you should pay special attention to your home and personal property coverage limits. Utah residents should insure their home with a comprehensive replacement cost policy to ensure their home and personal belongings are fully protected in the event of a disaster.

The Beehive State is at risk of flooding and landslides. In 2014, a landslide in North Salt Lake resulted in 27 homes having to be evacuated. Homeowners insurance does not cover flood or landslide damage in Utah or any of the other 49 states. State residents can supplement that gap in coverage by purchasing a flood insurance policy, which also includes coverage for landslides and mudslides.

The Utah Insurance Department is a valuable resource both for Utah homeowners purchasing coverage for the first time or for those who are already insured. The UID website has helpful information about what to prioritize when selecting your coverage, preparing for natural disasters, and buying flood insurance.

Unlike other states, Utah doesn’t offer a Fair Access to Insurance Requirements Plan (FAIR Plan). If you’re unable to get homeowners insurance with a standard carrier, look into coverage with a surplus or excess lines insurer. Surplus carriers specialize in risks that are typically rejected by traditional insurance companies.

A couple of downsides to getting coverage through a surplus carrier are that it’s typically expensive and the companies aren’t “admitted” with the state, meaning they aren’t subject to the same rules and regulations as traditional insurance companies. But surplus lines coverage is a solid option if you’re a Utah resident looking for last minute coverage.