The cost of homeowners insurance in Pennsylvania is $1,680 a year for the average amount of coverage. Pennsylvania residents can compare rates from over a dozen companies with Policygenius.

Homeowners insurance is essential financial protection for the 69% of Pennsylvania residents who own a home. A standard policy includes coverage for your house and personal belongings, ensuring you’ll be protected from the bad weather, Nor’easters, tornado events, and coastal storms the Keystone State frequently experiences.

The statewide average cost of homeowners insurance in Pennsylvania is $1,680, but policy premiums can differ greatly based on specific factors related to your home and the details of your policy. Your rates will be directly impacted by your home’s condition and style of build, its location, your credit and claims history, and your policy deductible amount. Rates will also be different from company to company for the same level of coverage, which is why it’s so important to compare policies from different companies — that’s where we come in.

To help simplify your shopping experience, Policygenius reviewed the five best homeowners insurance companies in Pennsylvania offered through our website. We also calculated the cheapest and most expensive cities in Pennsylvania for home insurance based on hundreds of submitted quotes.

If you’re one of the 2.4 million Pennsylvania residents who live in coastal regions of the state, then Safeco, with its excellent replacement cost coverage options, may be your best bet against volatile coastal weather. Safeco has four comprehensive tiers of coverage, and all include the option to add extended replacement cost, a policy add-on that increases your home’s coverage limits an additional 25% or 50% if rebuild costs exceed your dwelling coverage amount. Safeco’s “Premier Plan”, its highest level of coverage, includes guaranteed replacement cost, which pays for a rebuild of your home regardless of the price. Homeowners in coastal or tornado-prone parts of Western Pennsylvania should consider Safeco for this invaluable coverage enhancement.

For a relatively low $1,141 statewide average policy cost, Pennsylvania residents can insure their homes with Hippo, a company that offers coverage as good as any we’ve reviewed. Hippo homeowners insurance includes all of the primary coverages you find in a standard home insurance policy, as well as several coverage enhancements like equipment breakdown coverage, service line coverage, water backup coverage, and computer coverage. Most companies will charge you extra for the aforementioned endorsements, but with Hippo it all comes packaged into their base policy.

In terms of discounts, few Pennsylvania insurance companies compare to Nationwide. Nationwide offers a generous multi-policy discount if you bundle your home insurance policy with their auto insurance or another type of property insurance. Nationwide also offers discounts for securing and strengthening your home and roof from break-ins and bad weather. If you haven’t filed a claim in three years or if you recently purchased your home, that can also land you a discount with Nationwide.

Average cost of homeowners insurance in Pennsylvania by company

When comparing insurance companies, Pennsylvania residents may find that rates differ greatly from company to company for the same level of coverage. The more expensive policy may provide more coverage add-ons in a basic plan than their competitors, or some companies may simply charge more for coverage in certain areas than others.

Average cost of home insurance in Pennsylvania by coverage amount

Average cost of home insurance in Pennsylvania by city

Insurance companies will also price policies differently based on where you live. We found the city of York in Southeastern Pennsylvania has the highest rates in the state with a $3,007 average annual premium for $100,000-500,000 in coverage. The cheapest area on average is Cranberry Township, north of Pittsburgh, with a $802 average annual premium.

Cities were selected based on which had the highest number of submitted quotes for $100,000–500,000 in coverage

The cheapest cities for homeowners insurance in Pennsylvania 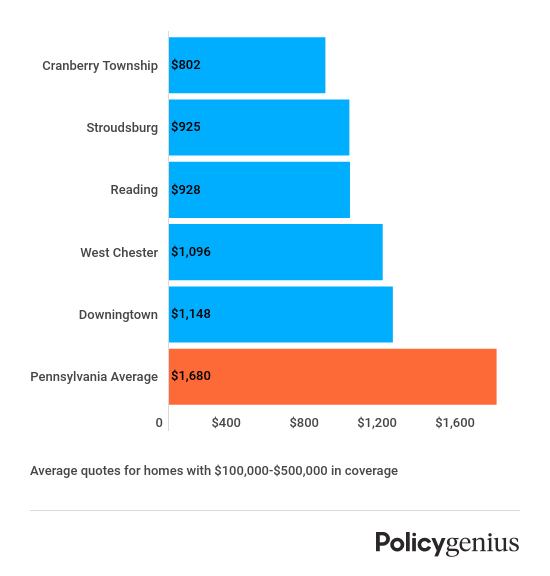 The most expensive cities for homeowners insurance in Pennsylvania 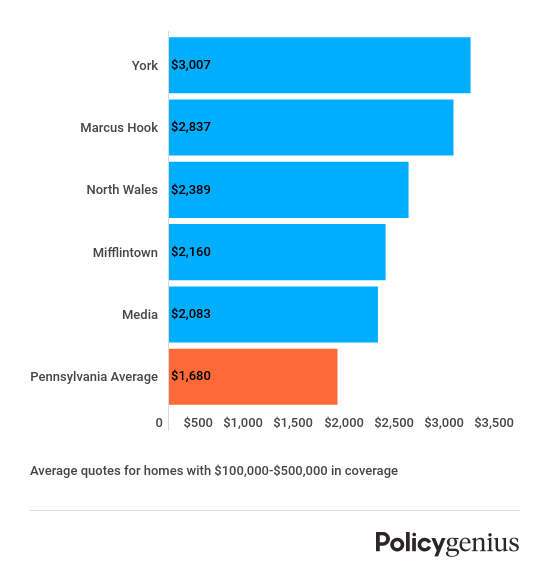 Guide to homeowners insurance in Pennsylvania

Pennsylvania features 51 miles of coastline, but you may be surprised to find out all 51 of those miles border Lake Erie to the north, not the Atlantic Ocean. However the southeastern reaches of the state around the Philadelphia-Camden-Wilmington metropolitan area are exposed to inclement coastal weather conditions from tropical storms. Although just one hurricane has made landfall in Pennsylvania in recorded history, the state often experiences heavy rains and hurricane-force winds from tropical cyclones in the Atlantic basin.

Nor’easter storms, another type of cyclone, are also common in Pennsylvania, bringing with them freezing temperatures, strong winds and heavy, wet snow that can cause everything from power outages to ice dams and expensive roof damage. Pennsylvania also saw a busier-than-usual tornado season in 2019. The Keystone State saw as many as 43 tornadoes in 2019, more than double its annual average of 17.

Given the state’s propensity for bad weather in all four seasons, it’s extra important for Pennsylvania residents to insure their home with a comprehensive replacement cost policy to ensure their home and personal belongings are fully protected in the event of a disaster.

Homeowners insurance does not cover flood damage in Pennsylvania or any of the other 49 states. Pennsylvania residents can supplement that gap in coverage by purchasing a flood insurance policy. Flood insurance can typically be provided through the same insurance company that insures your home.

Most flood policies are sold by private companies but administered by the federal government’s National Flood Insurance Program (NFIP). An NFIP flood policy can cover up to $250,00 for the structure of your home and up to $100,000 for personal belongings. If you live in coastal pockets of Pennsylvania or areas that experience frequent flash floods, like South Central Pennsylvania, you should consider a flood insurance policy.

The Pennsylvania Insurance Department is a valuable resource for both Pennsylvania homeowners purchasing coverage for the first time or those who are already insured. The PID website has helpful information about what to prioritize when selecting your coverage, how to prepare for bad weather, and you can even file a complaint if you’re unhappy with a home insurance claim settlement.

If you’re struggling to find coverage, you can get last-resort coverage via an Pennsylvania Fair Access to Insurance Requirements (FAIR) Plan. The Pennsylvania FAIR Plan is offered by the Insurance Placement Facility of Pennsylvania, a not-for-profit insurance association that provides basic coverage for Pennsylvania residents who are unable to get home insurance on the open market. To qualify for a FAIR Plan, you need to demonstrate that you’ve had at least three unsuccessful attempts to buy insurance from other companies.