The cost of homeowners insurance in Oregon is $793 a year for the average amount of coverage. Oregon residents can compare rates from multiple companies with Policygenius.

Homeowners insurance is essential financial protection for the 62% of Oregon residents who own a home. Though Oregon has milder weather than some other Western Coast states, when shopping for homeowners insurance, homeowners in Oregon should keep in mind the state’s penchant for heavy snowfall and increased risk of wildfires.

The statewide average cost of homeowners insurance in Oregon is $793 per year, but policy premiums can differ greatly based on specific factors related to your home and the details of your policy. Your rates will be directly impacted by your home’s condition and style of build, its location, your credit and claims history, and your policy deductible amount. Rates also vary from company to company for the same level of coverage, which is why it’s so important to compare policies from different companies — that’s where we come in.

To help simplify your shopping experience, Policygenius reviewed the five best homeowners insurance companies in Oregon offered through our website. We also calculated the cheapest and most expensive cities in Oregon for home insurance based on hundreds of submitted quotes.

Your home is arguably your most valuable asset, so it’s a good idea to do some research before deciding which insurance company is right for you. A great homeowners insurance company is financially stable, has dependable customer service, affordable coverage, flexible policy options, and high quality discounts.

Using those benchmarks, we determined the following five companies were the best homeowners insurance companies in Oregon. Read about our methodology here.

Safeco provides the cheapest Oregon home insurance quote of any Policygenius partner carrier. The average quote with Safeco is $514 for $100,000–500,000 in coverage, which is over $200 cheaper than the statewide average of $793. If you’re a Oregon homeowner looking for a budget pick, Safeco may be your best bet.

There are many ways to save on your insurance premiums, including taking advantage of potential discounts offered by your insurer. Nationwide is among the best in this area, offering a generous multi-policy discount if you bundle your home insurance policy with their auto insurance or another type of property insurance. Nationwide also offers discounts for securing and strengthening your home and roof from break-ins and bad weather. If you haven’t filed a claim in three years or if you recently purchased your home, that can also land you a discount with Nationwide.

Oregon homeowners may want to consider maximizing coverage for the structure of their home, especially those who live in wildfire-prone areas. Encompass has three separate coverage packages that include all of the primary coverages you find in a standard home insurance policy, as well as several coverage enhancements and policy add-ons like replacement cost coverage, water backup protection, identity theft protection, fine art protection, and more.

If you’re an Oregon homeowner looking to get a quote quickly and easily, Hippo may be your best option. The application process with Hippo is faster than any other homeowners insurance company we’ve reviewed in Oregon. Hippo has a seamless online application process: all you need to do is type in a few details about your home and you get a quote in under a minute.

Average cost of homeowners insurance in Oregon by company

When comparing insurance companies, Oregon residents may find that rates differ greatly from company to company for the same level of coverage. A more expensive policy may provide more coverage add-ons in a basic plan than their competitors, but some companies may simply charge more for coverage in certain areas than others.

Average cost of home insurance in Oregon by coverage amount

Average cost of home insurance in Oregon by city

Insurance companies will also price policies differently based on where you live. We found the city of Corvallis, located in Willamette Valley, has the lowest rates in the state with a $609 average annual premium for $100,000-500,000 in coverage. The most expensive area on average is Redmond, located in the High Desert region of Central Oregon, with an average annual premium of $1,038.

We selected the 20 largest cities in Oregon by population where customers have submitted quotes with Policygenius. Quotes are based on a coverage amount between $100,000 and 500,000.

The cheapest cities for homeowners insurance in Oregon 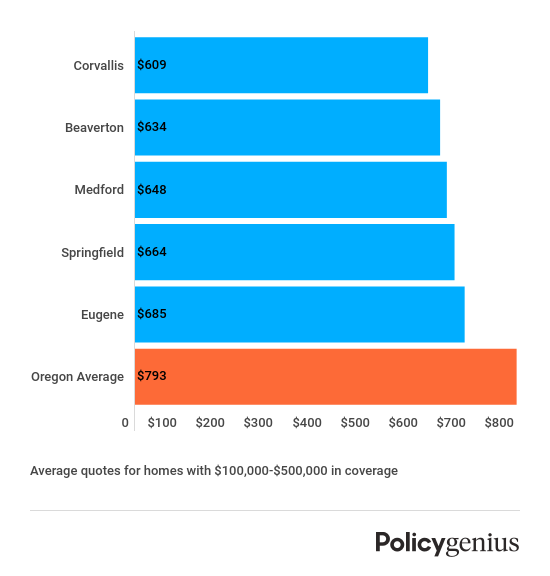 The most expensive cities for homeowners insurance in Oregon 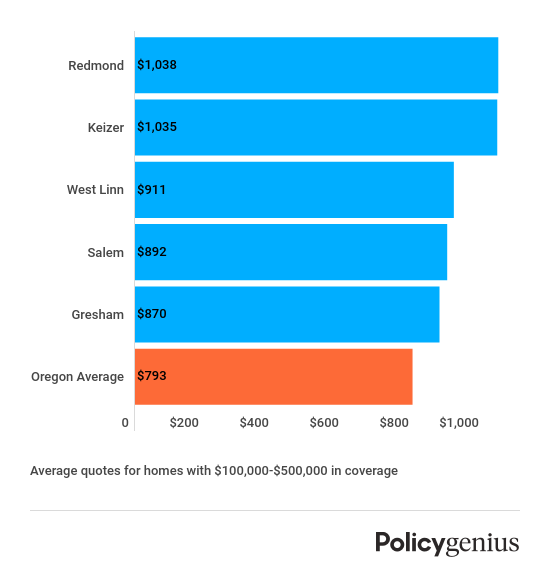 Guide to homeowners insurance in Oregon

The most common natural hazards in Oregon are thunderstorms and winter storms. Though homeowners insurance covers roof and foundation repairs if the weight of snow and ice causes your roof to collapse, Oregon residents — especially those located in the blizzard-prone Cascade Region of Oregon — should make sure to keep their roofs clear of heavy snowfall and ice dams.

Oregon can also experience earthquakes, a hazard that homeowners insurance does not cover. Although Oregon experiences mostly minor earthquakes, residents who live near a fault line may want to consider purchasing earthquake insurance in addition to their homeowners policy.

Like many states in the Western United States, Oregon is experiencing an increase in wildfires, with some fires setting nearly 50,000 acres of land ablaze. Though homeowners insurance does cover fire damage, homeowners in The Beaver State should pay close attention to home and personal property coverage limits and make sure they have enough insurance.

The most expensive natural hazard in Oregon is flooding, which costs the state on average $16 million in property losses per year. Oregon homes are also at risk of landslide damage. Homeowners insurance does not cover flooding or landslide damage in Oregon or any of the other 49 states. State residents can supplement that gap in coverage by purchasing a flood insurance policy.

The Oregon Division of Financial Regulation is a valuable resource both for Oregon homeowners purchasing coverage for the first time or for those who are already insured. The DFR website has helpful information about what to prioritize when selecting your coverage, preparing for natural disasters, and buying flood insurance.

If you’re struggling to find coverage, you can get last-resort coverage via a Oregon Fair Access to Insurance Requirements (FAIR) Plan. The Oregon FAIR Plan is a not-for-profit association that provides basic coverage for Oregon residents who are unable to get home insurance on the open market. To qualify for a FAIR Plan, you need to demonstrate that you’ve had at least three unsuccessful attempts to buy insurance from other companies.