The cost of homeowners insurance in Ohio is $1,228 a year for the average amount of coverage. Ohio residents can compare rates from multiple companies with Policygenius.

Homeowners insurance is essential financial protection for your home, personal property, and assets. If you’re one of the 66% of Ohioans who owns a home, you’ll want to keep in mind the state’s penchant for tornadoes and severe thunderstorms when shopping for homeowners insurance coverage.

The statewide average cost of homeowners insurance in Ohio is $1,228 per year, but policy premiums can differ greatly based on specific factors related to your home and the details of your policy. Your rates will be directly impacted by your home’s condition and style of build, its location, your credit and claims history, and your policy deductible amount. Rates also vary from company to company for the same level of coverage, which is why it’s so important to compare policies from different companies — that’s where we come in.

To help simplify your shopping experience, Policygenius reviewed the five best homeowners insurance companies in Ohio offered through our website. We also calculated the cheapest and most expensive cities in Ohio for home insurance based on hundreds of submitted quotes.

When selecting a homeowners insurance policy, Ohio homeowners will want to look at far more than simply the cost of coverage. Consider the insurer’s financial standing with credit agencies like A.M. Best, its customer service and claims ratings with J.D. Power, and the price for the level of coverage you’re getting, amongst other factors.

If you’re an Ohio homeowner on a budget, State Auto may be the best choice for you. The average quote in Ohio with State Auto is $985 for $100,000–500,000 in coverage, which is over $200 cheaper than the statewide average of $1,228. State Auto also offers an array of discount options, so you may be able to save even more on your premiums.

In addition to the coverage that most standard homeowners policies come with, Chubb’s policies also contain enhanced coverage options. Chubb’s home policies include extended replacement cost coverage for your home, replacement cost coverage for your personal property, and a variety of endorsements and discount options. It’s important to note that Chubb is a premier carrier, meaning they only insure high-value homes and property, and Chubb may not insure you if you don’t have additional valuables that also need to be insured.

Ohio homeowners looking to save on their premiums should consider a company that offers a wide range of discounts, such as Nationwide. Nationwide offers a generous multi-policy discount if you bundle your home insurance policy with their auto insurance or another type of property insurance. Nationwide also offers discounts for securing and strengthening your home and roof from break-ins and bad weather. You may also save if your home is new or you haven’t filed a claim recently.

If you live in a tornado-prone area of Ohio and you're looking to maximize protection for the structure of your home, Safeco may be your best option. Safeco has four comprehensive tiers of coverage, which all include the option to add extended replacement cost, a policy add-on that increases your home’s coverage limits an additional 25% or 50% if rebuild costs exceed your dwelling coverage amount. Safeco’s “Premier Plan”, its highest level of coverage, includes guaranteed replacement cost, which pays for a rebuild of your home regardless of the price.

An insurance company’s financial stability is important — you want a company that is reliable and efficient when it comes to paying out claims. With an A++ rating with A.M. Best, Travelers has the highest score a company can receive with the insurance company credit rating agency. Travelers also has high marks with Standard & Poors, which measures long-term financial stability, as well as Moody’s, which measures what the expected losses would be if a company were to go into default.

Average cost of homeowners insurance in Ohio by company

When comparing insurance companies, Ohio residents may find that rates differ greatly from company to company for the same level of coverage. A more expensive policy may provide more coverage add-ons in a basic plan than their competitors, but some companies may simply charge more for coverage in certain areas than others.

After reviewing hundreds of quotes submitted with Policygenius, we found that State Auto is the cheapest insurance company in Ohio with an average annual premium of $985 for $100,000–500,000 in coverage. Encompass is the most expensive with an annual premium of $1,682 for the same amount of coverage.

Average cost of home insurance in Ohio by coverage amount

Average cost of home insurance in Ohio by city

Insurance companies will also price policies differently based on where you live. We found Akron has the lowest rates in the state with an average annual premium of $992 for $100,000-500,000 in coverage. The most expensive area on average is Hamilton with an annual premium of $2,354 for the same amount of coverage.

The cheapest cities for homeowners insurance in Ohio 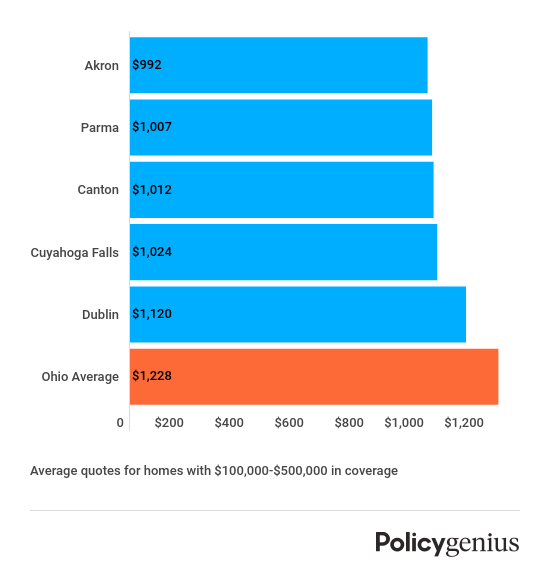 The most expensive cities for homeowners insurance in Ohio 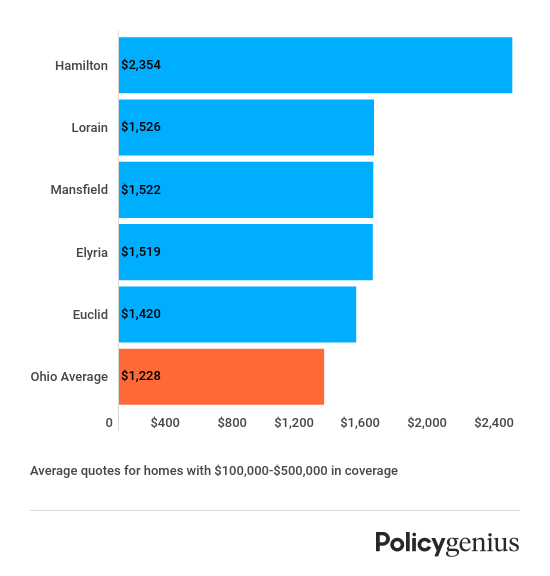 Guide to homeowners insurance in Ohio

According to the NOAA, tornadoes cost Ohio $56.3 million per year in annualized property losses. In 2019, 59 tornadoes tore through the Buckeye State — including an EF4 tornado that ripped through Montgomery County in late May and caused close to $500 million in insured property losses. While most homeowners insurance companies in Ohio will cover windstorm damage — including damage caused by tornadoes — you should be sure you have additional structural protection like extended or guaranteed replacement cost coverage if you live in a particularly at-risk area in the southern half of the state.

The Buckeye State can also experience severe thunderstorms and winter storms. Homeowners insurance does cover roof and foundation damage, but homeowners should still try to keep their roofs clear of ice dams and excessive snow.

Like many other Rust Belt states, there are abandoned mines throughout Ohio. Homeowners insurance typically doesn’t cover homes that are damaged or destroyed because of ground movement from underground mines. However, Ohio requires insurance companies to include coverage from mine subsidence in 26 counties due to the over 4,000 abandoned coal mines across the state. In addition to the 26 counties where companies have automatic mine subsidence coverage, 11 counties have optional coverage for no additional premium.

No, homeowners insurance does not cover flooding in Ohio or any of the other 49 states. In February 2018, severe floods in the Buckeye State resulted in then-Governor John Kasich issuing a state of emergency in 17 counties. Despite being a landlocked state, floods are the most expensive natural hazard in Ohio, costing the Buckeye State $72.8 million per year in annualized property losses.

State residents may want to consider supplementing that gap in coverage by purchasing a flood insurance policy. Flood insurance can typically be purchased through the same insurance company that insures your home. Most flood policies are sold by private companies but administered by the federal government’s National Flood Insurance Program (NFIP). An NFIP flood policy can cover up to $250,00 for the structure of your home and up to $100,000 for personal belongings.

The Ohio Department of Insurance is a valuable resource both for Ohio homeowners purchasing coverage for the first time or for those who are already insured. The ODI website has helpful information about what to prioritize when selecting your coverage, purchasing flood insurance, and filing complaints.