The cost of homeowners insurance in New Jersey is $1,152 a year for the average amount of coverage. New Jersey residents can compare rates from multiple companies with Policygenius.

Homeowners insurance covers your home, personal property, and total assets in the event of property loss or an expensive lawsuit. If you’re one of the 64% of New Jersey residents who owns a home, you’ll want to make sure your home is effectively insured against severe coastal weather during hurricane season and frequent snowstorms during the winter months

The statewide average cost of homeowners insurance in New Jersey is $1,152 per year, but your own policy cost will be impacted by several factors, namely your home’s age, construction type, location, your policy deductible, your claims history, and your credit history. Different New Jersey insurers may also provide vastly different rates for the same property, which is why it’s so important to compare insurance options from multiple companies — that’s where we come in.

To help simplify and better inform your shopping experience, Policygenius reviewed the five best homeowners insurance companies in New Jersey offered through our website and calculated the state’s cheapest and most expensive cities for home insurance based on hundreds of submitted quotes.

Before finalizing your homeowners insurance policy, you should research the company insuring what is arguably your most important asset. An exceptional homeowners insurance company offers competitive rates, dependable customer service, flexible policy options, high-quality discounts, and is financially stable.

Using that criteria, we determined the following five companies were the best homeowners insurance companies in New Jersey. Read about our methodology here.

Hippo, a managing general agent (MGA) with flexible underwriting capabilities, provides the cheapest New Jersey home insurance quote of any Policygenius partnering insurer. The average quote with Hippo is $1,005, more than $100 cheaper than the average New Jersey home insurance quote. If you're a New Jersey resident looking for industry-best coverage at a low rate, then Hippo is the company that you want insuring your home.

Garden State residents seeking to maximize the dwelling coverage on their homes should consider MetLife’s replacement cost coverage options. MetLife has three comprehensive levels of coverage, including MetLife GrandProtect — the most robust coverage tier with MetLife. The GrandProtect plan includes guaranteed replacement cost, a policy enhancement that guarantees you’ll be reimbursed the full replacement value of the home in the event of a total loss, regardless of the cost.

Despite the fact that it’s only been around since 2014 and lacks the reputation of industry mainstays like Travelers, Safeco, and MetLife, Swyfft has carved its own niche as one of the more tech-centric insurance companies around. That approach is apparent in Swyfft’s online quote process, which only takes about 15 or 20 seconds. To apply for home insurance with Swyfft, all you need to do is type in your home’s address and out comes a quote. You can also get a Swyfft quote by applying for home insurance with Policygenius.

Average cost of homeowners insurance in New Jersey by company

When comparing insurance companies, New Jersey residents may find that rates differ greatly from company to company for the same level of coverage. Certain companies may offer more coverage add-ons in a basic plan than competitors, or some may simply have higher rates in certain areas than others.

Average cost of home insurance in New Jersey by city

Insurance companies also price policies differently based on where in New Jersey your home is located. We found that Union City has the highest rates in the state with a $3,370 average annual premium for $100,000-500,000 in coverage. North Bergen is the cheapest city for home insurance, on average, with a $721 average annual premium.

We selected the 20 largest cities in New Jersey by population where customers have submitted quotes with Policygenius. Quotes are based on a coverage amount between $100,000 and 500,000.

The cheapest cities for homeowners insurance in New Jersey 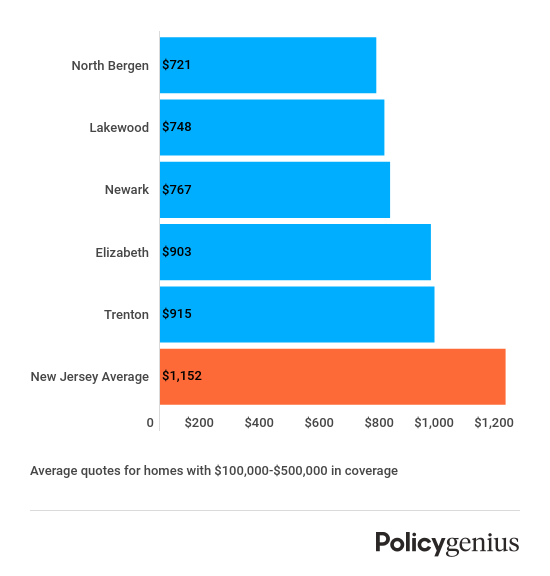 The most expensive cities for homeowners insurance in New Jersey 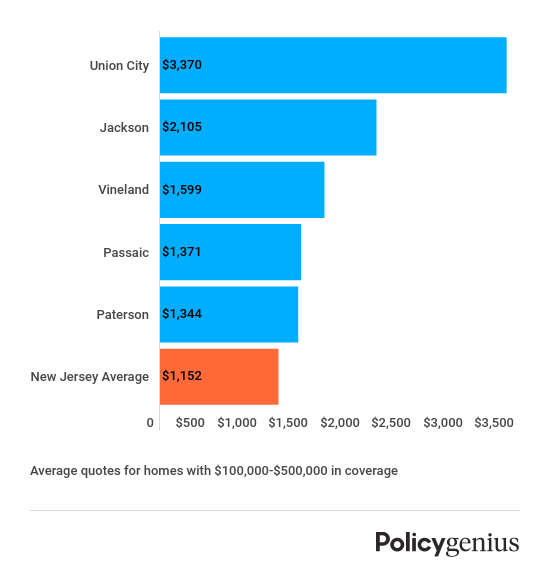 Due to its location on the Atlantic Coast, New Jersey is prone to severe and costly tropical storms once hurricane season rolls around in early June. Hurricane Sandy in 2012 began in the Caribbean Sea just north of Panama, but eventually made its way to New Jersey where it caused around $30 billion in damage to the Garden State. The tropical cyclone also caused over two million homes in the state to lose power, and around 350,000 homes were damaged or destroyed entirely.

Climate change is also affecting New Jersey faster than much of the rest of the United States. New Jersey has warmed more than twice as much as most of the country, and the state's sea level is rising faster than most coastal areas of the country due to its sinking coastline. As the Jersey coast continues to disappear, it will be easier for tropical storm surge to wash over barriers and impact homes and communities further inland.

If your home is deemed too high risk for wind coverage, you may be able to find windstorm insurance through a surplus or excess lines insurance carrier. Surplus carriers specialize in covering risks that other insurers won’t cover.

No, homeowners insurance does not cover flood damage in New Jersey or any of the other 49 states. New Jersey residents can supplement that gap in coverage by purchasing a flood insurance policy. Flood insurance can typically be purchased through the same insurance company that insures your home.

Being on the Atlantic Coast, New Jersey is vulnerable to coastal flooding due to rising sea levels, high tides, and hurricane storm surge. If you live in coastal New Jersey or in areas of the state that experience frequent flash floods, you should consider a flood insurance policy.

The New Jersey Department of Banking & Insurance is a great resource both for New Jersey homeowners purchasing coverage for the first time or those who are already insured. The department website provides educational tools, consumer guides, flood insurance resources, and hurricane mitigation tips.

New Jersey insurance companies may also require a separate named storm deductible, or they could exclude tropical storm damage from your policy entirely if your home is deemed too high risk.

If you’re struggling to find homeowners insurance or named storms are excluded from your policy, you can get a type of last-resort coverage known as a Fair Access to Insurance Requirements Plan (FAIR Plan) via the New Jersey Insurance Underwriting Association

The NJIUA is a not-for-profit insurance association that provides basic coverage for New Jersey residents who are unable to get home insurance on the open market. To qualify for a FAIR Plan with the NJIUA, you need to demonstrate that you’ve had at least three unsuccessful attempts to buy insurance from other companies. Keep in mind that the NJIUA does not accept applications for any new policies or coverage increases on an existing policy if a hurricane watch or warning is in effect for any portion of New Jersey.

Pat Howard is a homeowners insurance editor at Policygenius in New York City. He has written extensively about home insurance cost, coverage, and companies since 2018, and his insights have been featured on Investopedia, Lifehacker, MSN, Zola, HerMoney, and Property Casualty 360.