The cost of homeowners insurance in Minnesota is $2,081 a year for the average amount of coverage. Minnesota residents can compare rates from multiple companies with Policygenius.

Homeowners insurance is financial protection for your home, which is likely your biggest financial asset and where you’ll spend much of your life. The state of Minnesota has a fairly high home ownership rate, as nearly 72% of Minnesota homes are owned rather than rented. Whether you’re a Minnesota resident with a mortgage on your home or your house is fully paid off, you’ll want a comprehensive homeowners insurance policy with a trusted company.

The statewide average cost of homeowners insurance in Minnesota is $2,081 per year, but your own policy cost is going to be impacted by multiple factors, namely the age and condition of your roof, your home’s construction type, the city it’s located in, your policy deductible, your claims history, and your credit score. Home insurance premiums also vary from company to company, even for the same property, which is why it’s so important to compare policy options and rates from several insurers — that’s where we come in.

To help simplify and better inform your shopping experience, Policygenius reviewed the five best homeowners insurance companies in Minnesota offered through our website and calculated the state’s cheapest and most expensive cities for home insurance based on hundreds of submitted quotes.

Before selecting homeowners insurance that works for you and your home, you should do a little background research on the company supplying the policy. A solid homeowners insurance company will have good financial ratings, reliable customer service, affordable coverage, multiple policy options, and several available discounts.

Using that criteria, we determined the following four companies were the best homeowners insurance companies in Minnesota. Read about our methodology here.

With an average quote of $1,634 per year, Travelers provides the cheapest Minnesota home insurance quote of any Policygenius partnering insurer. If you're a Minnesota resident looking for industry-best coverage at a low rate, then Travelers is the company that you want insuring your home.

One important indicator of an insurance company’s ability to pay out claims in an effective and timely manner is its financial stability, and Encompass is among the highest-rated insurers in that area. Encompass has an A+ rating from credit-rating agency A.M. Best, the second highest score a company can receive. Encompass also has high marks with Standard & Poors, which measures long-term financial stability, as well as Moody’s, which measures what the expected losses would be if a company were to go into default.

Whether you’re a Minnesota resident who’s currently shopping around and wants to know more about Stillwater’s home insurance offerings, or you have a question about your existing Stillwater policy, few companies are as communicable and transparent about their products as Stillwater. The Stillwater website has a reliable online chat feature, as well as directions about who to contact for information about specific lines of insurance, claims, and regional offices.

Average cost of homeowners insurance in Minnesota by company

When comparing insurance companies, Minnesota residents may find that rates differ greatly from company to company for the same level of coverage. Certain companies may offer more coverage add-ons in a basic plan than competitors, while some may simply have higher rates in certain areas than others.

Average cost of home insurance in Minnesota by coverage amount

Average cost of home insurance in Minnesota by city

Insurance companies also price policies differently based on where in Minnesota your home is located. We found that Brooklyn Park, a northwest suburb in the Twin Cities metropolitan area, has the highest rates in the state with a $3,541 average annual premium for $100,000-500,000 in coverage. Duluth is the cheapest city in Minnesota for home insurance with a $1,613 average annual premium.

We selected the 20 largest cities in Minnesota by population where customers have submitted quotes with Policygenius. Quotes are based on a coverage amount between $100,000 and 500,000.

The cheapest cities for homeowners insurance in Minnesota 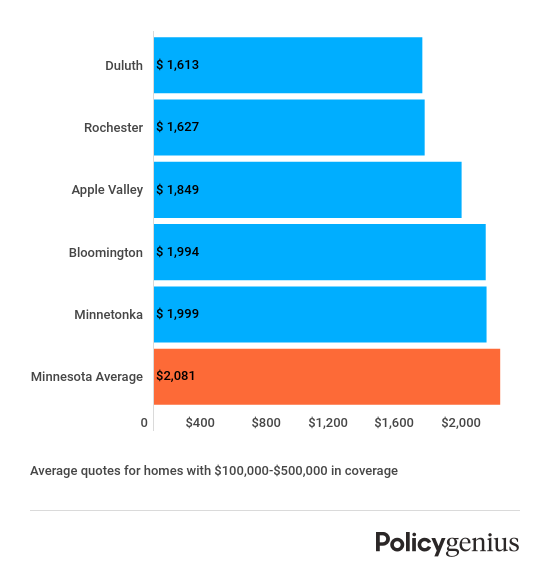 The most expensive cities for homeowners insurance in Minnesota 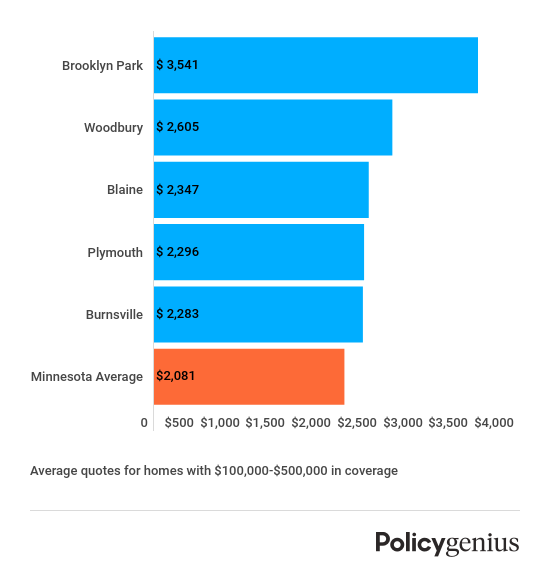 Guide to homeowners insurance in Minnesota

Minnesota sustained $1.2 billion in insured catastrophe losses in 2019, ranking it 6th in the country in terms of covered property loss. Hailstorms, tornadoes, wildfires, and thunder and lightning storms are all common weather events and disasters in Minnesota. The state experienced 54 tornadoes in 2019, the 11th most in the country and more than any of its Midwestern neighbors.

The state also experiences extremely cold weather in the northern reaches of the state from December–March, averaging around 8 degrees in the north and 18 degrees in the south during the winter months. Homeowners insurance covers perils like frozen pipes (so long as you made an effort to heat your home) and damage if the weight of snow and ice causes your roof to collapse, but you should take extra risk-prevention measures to avoid expensive property damage claims that can cause your insurance rates to go up.

No, homeowners insurance does not cover flood damage in Minnesota or any of the other 49 states. Minnesota residents can supplement that gap in coverage by purchasing a flood insurance policy. Flood insurance can typically be purchased through the same insurance company that insures your home.

Minnesota is nicknamed the “Land of 10,000 Lakes” due to its abundance of freshwater inland alcoves scattered throughout the state. This natural beauty provides tranquil refuge for Minnesotans in the summer, and endless recreation — from pond hockey to ice fishing to snowmobiling — in the winter. The state’s many lakes, rivers and deltas also have a tendency to overflow and affect nearby properties. If you’re a Minnesota homeowner who lives near a body of water, you’ll want to consider supplemental flood insurance for your home.

The [Minnesota Commerce Department(https://mn.gov/commerce/industries/insurance/) is an essential resource both for Minnesota homeowners purchasing coverage for the first time and for those who already have insurance but have questions related to their coverage or would like to file a complaint.

If you’re struggling to find coverage, you can get last-resort coverage via an Minnesota Fair Access to Insurance Requirements (FAIR) Plan, a not-for-profit insurance association that provides basic coverage for Minnesota residents who are unable to get home insurance on the open market. To qualify for a FAIR Plan, you need to demonstrate that you’ve had at least three unsuccessful attempts to buy insurance from other companies.