The cost of homeowners insurance in Maryland is $1,271 a year for the average amount of coverage. Maryland residents can compare rates from multiple companies with Policygenius.

Homeowners insurance is essential financial protection for the 67% of Maryland residents who own a home. The Old Line State is full of beautiful beaches, bays, and rivers, but its proximity to the Atlantic Coast can make the state susceptible to tropical storm and hurricane damage. Maryland residents should make sure their homes are protected with comprehensive and reliable homeowners insurance in the event of windstorm or hurricane damage.

The statewide average cost of homeowners insurance in Maryland is $1,271 per year, but policy premiums can differ greatly based on specific factors related to your home and the details of your policy. Your rates will be directly impacted by your home’s condition and style of build, its location, your credit and claims history, and your policy deductible amount. Rates also vary from company to company for the same level of coverage, which is why it’s so important to compare policies from different companies — that’s where we come in.

To help simplify your shopping experience, Policygenius reviewed the five best homeowners insurance companies in Maryland offered through our website. We also calculated the cheapest and most expensive cities in Maryland for home insurance based on hundreds of submitted quotes.

Using those benchmarks, we determined the following five companies were the best homeowners insurance companies in Maryland. Read about our methodology here.

Hippo provides the cheapest Maryland home insurance quote of any Policygenius partner carrier. The average quote with Hippo is $972 for $100,000–500,000 in coverage, which is over $200 cheaper than the statewide average of $1,271. If you’re a Maryland homeowner looking for a budget pick, Hippo may be your best bet.

There are many ways to save on your insurance premiums, like with policy discounts. Nationwide offers a generous multi-policy discount if you bundle your home insurance policy with their auto insurance or another type of property insurance. Nationwide also offers discounts for securing and strengthening your home and roof from break-ins and bad weather. If you haven’t filed a claim in three years or if you recently purchased your home, that can also land you a discount with Nationwide.

If you’re a Maryland homeowner looking to maximize the coverage for the structure of your home, Safeco may be the way to go. Safeco has four comprehensive tiers of coverage, which all include the option to add extended replacement cost, a policy add-on that increases your home’s coverage limits an additional 25% or 50% if rebuild costs exceed your dwelling coverage amount. Safeco’s “Premier Plan”, its highest level of coverage, includes guaranteed replacement cost, which pays for a rebuild of your home regardless of the price.

Maryland residents looking for a quick, personalized claim process should consider purchasing homeowners insurance with Chubb. Chubb guarantees that they’ll make every effort to issue claim payments within 48 hours of a resolved claim. They also offer multiple claim settlement options, which gives you the option of a cash reimbursement on a loss if you don’t want to replace or repair your damaged home or personal belongings.

You can also download Chubb Mobile Estimate App that will help you obtain damage estimates to send directly to your claims representative and expedite your claim.

Average cost of homeowners insurance in Maryland by company

When comparing insurance companies, Maryland residents may find that rates differ greatly from company to company for the same level of coverage. A more expensive policy may provide more coverage add-ons in a basic plan than their competitors, but some companies may simply charge more for coverage in certain areas than others.

Average cost of home insurance in Maryland by coverage amount

Average cost of home insurance in Maryland by city

We selected the 20 largest cities in Maryland by population where customers have submitted quotes with Policygenius. Quotes are based on a coverage amount between $100,000 and 500,000.

The cheapest cities for homeowners insurance in Maryland 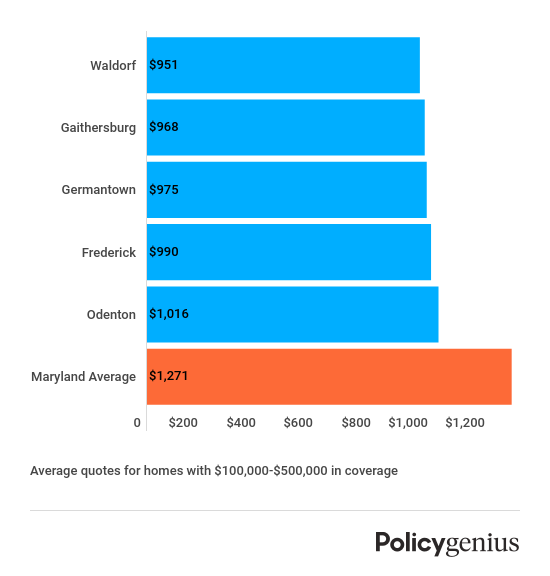 The most expensive cities for homeowners insurance in Maryland 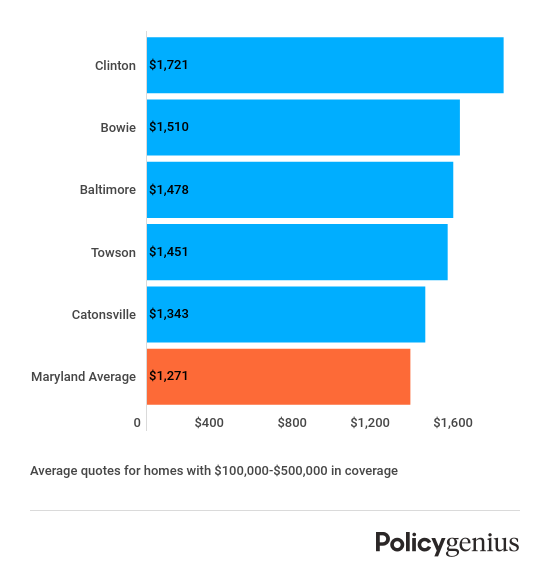 Guide to homeowners insurance in Maryland

According to the NOAA, the most expensive natural hazard in Maryland is hurricanes, which cost the state $23.6 million per year in property losses. Since Maryland is considered high-risk for hurricanes, insurers typically require two types of deductibles due to the high likelihood of tropical storm damage. Companies usually require a standard dollar amount deductible and a separate percentage deductible for hurricane-related wind damage.

If you’re denied wind coverage because of your home’s high hurricane risk, you may be able to find windstorm insurance through a surplus or excess lines insurance carrier. Surplus carriers cover risks that other insurers won’t cover.

Although Maryland’s beaches and bays bring in tourism and recreation, they also make the state susceptible to flooding. Homeowners insurance does not cover flooding in Maryland or any of the other 49 states. State residents can supplement that gap in coverage by purchasing a flood insurance policy.

The Maryland Insurance Administration is a valuable resource both for Maryland homeowners purchasing coverage for the first time or for those who are already insured. The MIA website has helpful information about what to prioritize when selecting your coverage, preparing for natural disasters, and buying flood insurance.

If you’re struggling to find coverage, you can get last-resort coverage via a Maryland Fair Access to Insurance Requirements (FAIR) Plan. The Maryland Joint Insurance Association is a not-for-profit association that provides basic coverage for Maryland residents who are unable to get home insurance on the open market. To qualify for a FAIR Plan, you need to demonstrate that you’ve had at least three unsuccessful attempts to buy insurance from other companies.