The cost of homeowners insurance in Maine is $854 a year for the average amount of coverage. Maine residents can compare rates from multiple companies with Policygenius.

Homeowners insurance covers your home, personal property, and assets in the event of property loss or an expensive lawsuit.

Maine has gorgeous summers, with mostly mild weather, however November through February bring extremely cold temperatures and the occasional nor’easter. Maine residents should ensure their homes are protected with comprehensive and reliable homeowners insurance in the event of winter storm damage.

The statewide average cost of homeowners insurance in Maine is $854 per year, but your own policy cost will be impacted by several factors, namely your home’s age, construction type, location, your policy deductible, your prior claims, and your credit history. Home insurance premiums also vary from company to company, even for the same house, which is why it’s so important to compare policy options and rates from several insurers — that’s where we come in.

To help simplify and better inform your shopping experience, Policygenius reviewed the five best homeowners insurance companies in Maine offered through our website and calculated the state’s cheapest and most expensive cities for home insurance based on hundreds of submitted quotes.

Before deciding on a homeowners insurance policy, it’s a good idea to do some background research on the company that will be insuring your home and assets. A great homeowners insurance company will have solid financial ratings, reliable customer service, affordable coverage, multiple policy options, and availability of discounts.

Using that criteria, we determined the following four companies were the best homeowners insurance companies in Maine. Read about our methodology here.

With an average quote of $709, MetLife provides the cheapest Maine home insurance quote of any Policygenius partnering insurer. If you're a Maine resident looking for industry-best coverage at a low rate, then MetLife is the company that you want insuring your home.

Whether you’re a Maine resident who’s currently shopping around wants to know more about Stillwater’s home insurance offerings, or you have a question about your existing Stillwater policy, few companies are as communicable and transparent about their products than Stillwater. The Stillwater website has a reliable online chat feature, as well as directions about who to contact for information about specific lines of insurance, claims, and regional offices.

Average cost of homeowners insurance in Maine by company

When comparing insurance companies, Maine residents may find that rates differ greatly from company to company for the same level of coverage. Certain companies may offer more coverage add-ons in a basic plan than competitors, while some may simply have higher rates in certain areas than others.

Average cost of home insurance in Maine by coverage amount

Average cost of home insurance in Maine by city

Insurance companies also price policies differently based on where in Maine your home is located. We found that Kennebunk on the coast south of Portland has the highest rates in the state with a $1,238 average annual premium for $100,000-500,000 in coverage. Windham, a town of 17,000 between the Atlantic Ocean and Sebago Lake, is the cheapest city in Maine for home insurance with a $582 average annual premium.

We selected the 20 largest cities in Maine by population where customers have submitted quotes with Policygenius. Quotes are based on a coverage amount between $100,000 and 500,000.

The cheapest cities for homeowners insurance in Maine

The most expensive cities for homeowners insurance in Maine 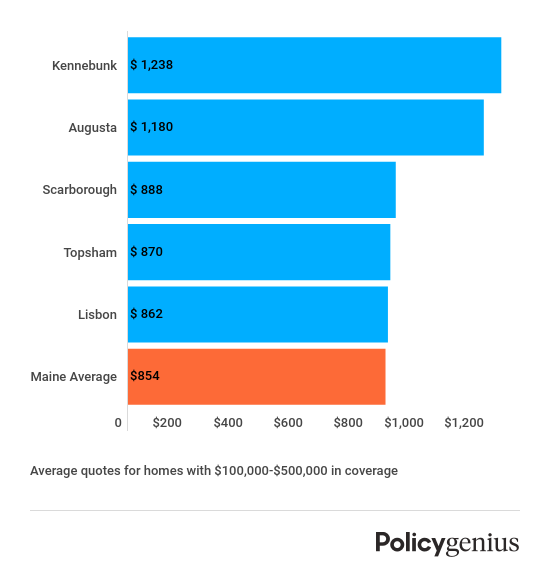 Guide to homeowners insurance in Maine

Although Maine experiences a relatively mild wet season with evenly distributed precipitation year-round, the state has long, cold winters that culminate in the occasional nor’easter.. The freezing rain and heavy snowfall from nor’easters can be both a time consuming chore to remove from your roof as well as an expensive hazard. Homeowners insurance covers roof damage and frozen pipes due to winter conditions, but Maine residents should make sure their home is covered by a trustworthy company with a reliable claims reputation.

No, homeowners insurance does not cover flood damage in Maine or any of the other 49 states. Maine residents can supplement that gap in coverage by purchasing a flood insurance policy. Flood insurance can typically be purchased through the same insurance company that insures your home.

It’s location on the Atlantic Coast and over 6,000 lakes and ponds makes Maine vulnerable to flooding due to high tides, flash flooding, snowmelt runoff. If you live in coastal Maine or close to one of the state’s many rivers or lakes, you should consider a flood insurance policy.

The Maine Bureau of Insurance is an essential resource both for Maine homeowners purchasing coverage for the first time and for those who already have insurance but have questions related to their coverage or would like to file a complaint.

If you’re unable to get homeowners insurance with a standard carrier, look into coverage with a surplus or excess lines insurer. Surplus carriers specialize in risks that are typically rejected by traditional insurance companies. A couple of downsides to getting coverage through a surplus carrier is it’s typically expensive and the companies aren’t admitted with the state, meaning they aren’t subject to the same rules and regulations as traditional insurance companies. But surplus lines coverage is a solid option if you’re a Maine resident looking for last minute coverage.