The cost of homeowners insurance in Arkansas is $2,113 a year for the average amount of coverage. Arkansas residents can compare rates from multiple companies with Policygenius.

Homeowners insurance covers your home, personal property, and assets in the event of severe storm damage, burglary, or an expensive lawsuit. If you’re one of the two-thirds of Arkansas residents who owns their home rather than renting, you’ll want to make sure your house is properly insured against devastating wildfires, tornadoes, and floods.

The statewide average cost of homeowners insurance in Arkansas is $2,113 per year, but the cost of your own policy will be determined by several factors, particularly the age of your roof, the home’s construction type, the city it’s located in, your policy deductible, claims history, and credit score. Bear in mind that different Arkansas insurers may provide vastly different rates for the same property, which is why it’s so important to compare insurance options from multiple companies — that’s where we come in.

To help simplify and better inform your shopping experience, Policygenius reviewed the five best homeowners insurance companies in Arkansas offered through our website and calculated the state’s cheapest and most expensive cities for home insurance based on hundreds of submitted quotes.

Before finalizing your homeowners insurance policy, you should research the company that will be insuring one of your biggest financial assets. An exceptional homeowners insurance company is financially stable, offers competitive rates, dependable customer service, flexible policy options, and effective discount options.

Using that criteria, we determined the following five companies were the best homeowners insurance companies in Arkansas. Read about our methodology here.

American Strategic Insurance, a member of the Progressive group of insurers, provides the cheapest Arkansas home insurance quote of any Policygenius partnering insurer. The average quote with ASI is $1,312 per year, around $800 cheaper than the average Arkansas home insurance quote. If you're a Arkansas resident looking for industry-best coverage at a low rate, then ASI is the company that you want insuring your home.

Arkansas residents looking to maximize the dwelling coverage on their homes should consider MetLife for its replacement cost coverage options. MetLife has three comprehensive levels of coverage, including MetLife GrandProtect — the most robust coverage tier with MetLife. The GrandProtect plan includes guaranteed replacement cost, a policy enhancement that guarantees you’ll be reimbursed the full replacement value of the home in the event of a total loss, regardless of the cost.

Arkansas residents looking for home insurance savings should look no further than State Auto, a company that offers an astonishing nine discounts for everything from bundling your home and auto insurance to fitting your house with smart home devices to fortified home discounts. Arkansas residents who build their homes to withstand the state’s high risk of tornadoes and hailstorms should take advantage of these valuable rate saving opportunities.

One important indicator of an insurance company’s ability to pay out claims in an effective and timely manner is its financial stability, and Travelers is among the highest-rated insurers in that area. Travelers has the highest credit rating a company can receive, with an A++ rating from A.M. Best. Travelers also has high marks with Standard & Poors, which measures long-term financial stability, as well as Moody’s, which measures what the expected losses would be if a company were to go into default.

Average cost of homeowners insurance in Arkansas by company

When comparing insurance companies, Arkansas residents may find that rates differ greatly from company to company for the same level of coverage. Certain companies may offer more coverage add-ons in a basic plan than competitors, or some may simply have higher rates in certain areas than others.

Average cost of home insurance in Arkansas by coverage amount

Average cost of home insurance in Arkansas by city

Insurance companies also price policies differently based on where in Arkansas your home is located. We found that Siloam Springs has the highest rates in the state with a $3,502 average annual premium for $100,000-500,000 in coverage. Benton is the cheapest city for home insurance, on average, with an average annual premium of $1,231.

We selected the 20 largest cities in Arkansas by population where customers have submitted quotes with Policygenius. Quotes are based on a coverage amount between $100,000 and 500,000.

The cheapest cities for homeowners insurance in Arkansas 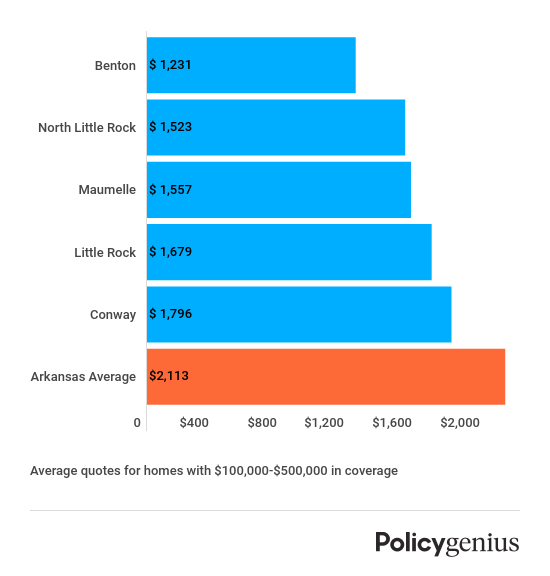 The most expensive cities for homeowners insurance in Arkansas 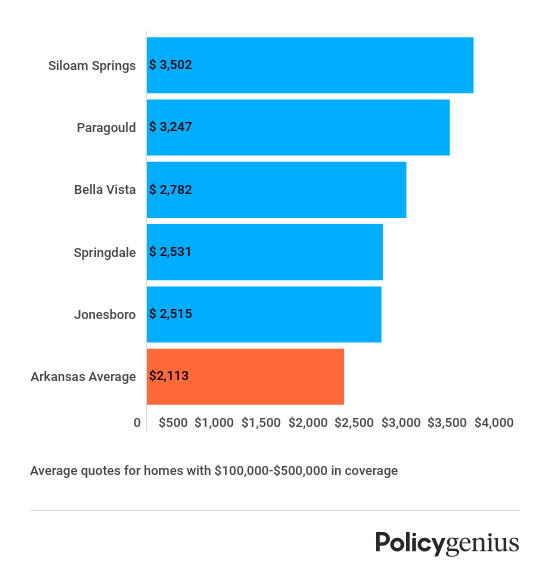 Guide to homeowners insurance in Arkansas

Arkansas isn’t quite in Tornado Alley, but the state is still at high risk of severe windstorm and tornado damage during the spring and summer, especially parts of Western Arkansas along the Oklahoma border. Arkansas residents, especially those in the city of Fayetteville and other cities in the northwest corner of the state, will want to make sure their homes are insured with a comprehensive homeowners insurance policy through a company with a reliable and trustworthy record of handling claims.

Arkansas is also prone to routine thunderstorms and lightning, wildfires, and winter storms and extreme cold during the winter months. In fact, according to the U.S. Department of Energy, winter storms and cold weather caused the most property damage of any natural hazard in the state from 1996–2014, with about $60 million in annualized property loss during that span. Tornado damage was second highest at around $52 million in annualized property loss.

No, homeowners insurance does not cover flood damage in Arkansas or any of the other 49 states. Arkansas residents can supplement that gap in coverage by purchasing a flood insurance policy. Flood insurance can typically be purchased through the same insurance company that insures your home.

With the Mississippi River along the length of Arkansas’ border with Mississippi and Tennessee, and the adjacent Arkansas River running through its most populated cities, many homes in the state face a high risk of flooding.

The Arkansas River floods in late May and early June of 2019 caused around $3 billion in property loss, damaging homes, agriculture, roads, and levees in Western Arkansas. The river often sees high water levels which, when combined with persistent rainfall, can lead to catastrophic overflow and impact entire communities. If you own a home along the Arkansas River or in any high-risk area of the state, consider a supplemental flood insurance policy.

The Arkansas Insurance Department is a helpful resource both for Arkansas homeowners purchasing coverage for the first time or those who are already insured. The department website has helpful brochures with information about everything from home insurance basics to disaster preparedness, as well as complaint forms if your insurance company doesn’t respond to your claim or if you think you were illegally dropped from your policy.

If you’re unable to get homeowners insurance with a standard carrier in Arkansas, look into coverage with a surplus or excess lines insurer. Surplus carriers specialize in risks that are typically rejected by traditional insurance companies. A couple of downsides to getting coverage through a surplus carrier are that it’s typically expensive and the companies aren’t admitted with the state, meaning they aren’t subject to the same rules and regulations as traditional insurance companies. But surplus lines coverage is a solid option if you’re an Arkansas resident looking for last minute coverage.

Pat Howard is a senior editor at Policygenius in New York City and an expert in homeowners insurance. He has written extensively about home insurance cost, coverage, and companies since 2018, and his insights have been featured on Investopedia, Lifehacker, MSN, Zola, HerMoney, and Property Casualty 360.