The cost of homeowners insurance in Arizona is $1,119 a year for the average amount of coverage. Arizona residents can compare rates from multiple companies with Policygenius.

Homeowners insurance protects your house, personal property, and assets in the event of the unexpected. If you’re one of the 54% of Arizonans who own a home, you may want to consider a comprehensive homeowners policy to protect your home and belongings, as Arizona’s hot summers can bring in severe thunderstorms and dust storms.

The statewide average cost of homeowners insurance in Arizona is $1,119 per year, but policy premiums can differ greatly based on specific factors related to your home and the details of your policy. Your rates will be directly impacted by your home’s condition and style of build, its location, your credit and claims history, and your policy deductible amount. Rates also vary from company to company for the same level of coverage, which is why it’s so important to compare policies from different companies — that’s where we come in.

To help simplify your shopping experience, Policygenius reviewed the five best homeowners insurance companies in Arizona offered through our website. We also calculated the cheapest and most expensive cities in Arizona for home insurance based on hundreds of submitted quotes.

Using those benchmarks, we determined the following five insurers were the best homeowners insurance companies in Arizona. Read about our methodology here.

Travelers provides the cheapest Arizona home insurance quote of any Policygenius partner carrier. The average quote with Stillwater is $832 for $100,000–500,000 in coverage, which is more than $200 cheaper than the statewide average of $1,119. If you’re an Arizona homeowner looking for a budget pick, Travelers may be your best bet.

If you’re an Arizona homeowner looking to get a homeowners insurance quote ASAP, Hippo may be the right choice for you. The application process with Hippo is faster than any other homeowners insurance company we’ve reviewed in Arizona. Hippo has a seamless online application process: all you need to do is type in a few details about your home and you get a quote in under a minute.

There are many ways to save on your insurance premiums, including policy discounts. Nationwide offers a generous multi-policy discount if you bundle your home insurance policy with their auto insurance or another type of property insurance. Nationwide also offers discounts for securing and strengthening your home and roof from break-ins and bad weather. If you haven’t filed a claim in three years or if you recently purchased your home, that can also land you a discount with Nationwide.

An insurance company’s financial stability is important — you want an insurer that is reliable and trustworthy. A.M. Best is the most reliable credit-rating tool policyholders can use to gauge the financial health of a particular company. A good score with A.M. Best means a company is likely to fulfill their financial obligation to you when it comes time to file a claim. With a score of A+, Progressive has close to the highest rating a company can receive from A.M. Best.

Encompass offers three tiers of custom-made policy packages. Each tier comes with standard homeowners insurance coverage, but the Deluxe and Elite packages offer a single deductible for both home and auto claims, a protection limit that combines all coverage limits under one number, and unlimited reimbursement for living expenses if your home is damaged and you need to live somewhere else while it’s being repaired or rebuilt.

Average cost of homeowners insurance in Arizona by company

When comparing insurance companies, Arizona residents may find that rates differ greatly from company to company for the same level of coverage. A more expensive policy may provide more coverage add-ons in a basic plan than their competitors, but some companies may simply charge more for coverage in certain areas than others.

Average cost of home insurance in Arizona by coverage amount

Average cost of home insurance in Arizona by city

Insurance companies will also price policies differently based on where you live. We found Yuma has the lowest rates in the state with a $718 average annual premium for $100,000-500,000 in coverage. The most expensive area on average is Glendale with an annual premium of $1,368 for the same amount of coverage.

We selected the 20 largest cities in Arizona by population where customers have submitted quotes with Policygenius. Quotes are based on a coverage amount between $100,000 and 500,000.

The cheapest cities in Arizona for homeowners insurance 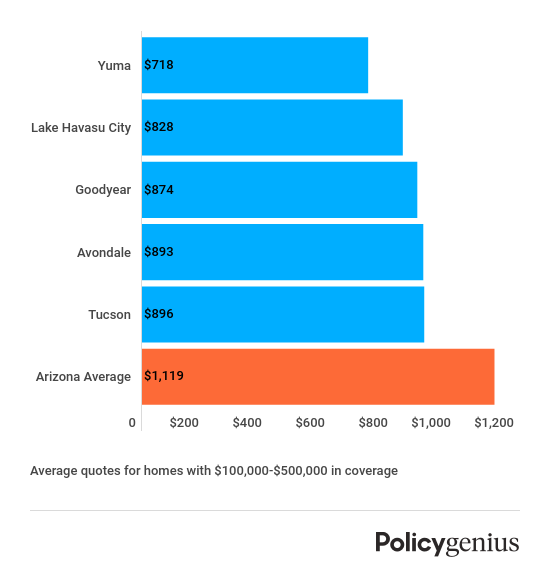 The most expensive cities in Arizona for homeowners insurance

Guide to homeowners insurance in Arizona

Arizona is home to the Grand Canyon and expansive deserts. The Copper State has a dry climate, which means summer can bring extreme heat and severe thunderstorms, marking Arizona’s monsoon season. Thunder and lightning storms are the most expensive hazard for Arizonans, costing the state $53.1 million per year in annualized property losses. Homeowners insurance does cover lightning damage, but Arizona residents who experience frequent storms should consider installing lightning protection systems and surge protector devices for extra protection.

Sandstorms or dust storms (also known as haboobs) are another natural risk for Arizonans, and coverage for haboobs isn’t always included in a standard homeowners insurance policy. That said, since dust storms are so common in Arizona, some insurers do offer coverage — so you should make sure to ask insurance companies if they include protection against dust storms.

Although Arizona doesn’t experience as many earthquakes as some other Western states, earthquakes are still a risk. Homeowners insurance typically does not cover earthquakes, so Arizona homeowners who live near a fault line should consider purchasing an earthquake insurance policy in addition to their homeowners policy.

No, homeowners insurance does not cover flooding in Arizona or any of the other 49 states. State residents can supplement that gap in coverage by purchasing a flood insurance policy.

The Arizona Department of Insurance is a valuable resource both for Arizona homeowners purchasing coverage for the first time or for those who are already insured. The ADI website has helpful information about what to prioritize when selecting your coverage, preparing for natural disasters, and buying flood or earthquake insurance.

Unlike other states, Arizona doesn’t offer Fair Access to Insurance Requirements (FAIR) Plan. If you’re unable to get homeowners insurance with a standard carrier, look into coverage with a surplus or excess lines insurer. Surplus carriers specialize in risks that are typically rejected by traditional insurance companies.

A couple of downsides to getting coverage through a surplus carrier are that it’s typically more expensive and the companies aren’t admitted with the state, meaning they aren’t subject to the same rules and regulations as traditional insurance companies. But surplus lines coverage is a solid option if you’re an Arizona resident looking for last minute coverage.