Not sure where to start?

Let our experts help you choose the right policy.

The cost of homeowners insurance in Georgia is $1,823 a year for the average amount of coverage. Georgia residents can compare rates from multiple companies with Policygenius.

Georgia residents know all about the importance of homeowners insurance, a financial safeguard that protects Peach State homes against everything from break-ins to tropical storm damage. If you own a home in suburban Atlanta, you probably have different coverage needs than someone who lives in Savannah, but it’s important you take extra time to review your coverage and the company insuring your home to ensure you’re well-protected against the unexpected.

The statewide average cost of homeowners insurance in Georgia is $1,823, slightly higher than the national average of $1,633, according to Policygenius quote data. But bear in mind that premiums for Georgia residents will vary based on specific factors related to your home and policy. Your rates will be directly impacted by your home’s condition and style of build, its location, your credit and claims history, and your policy deductible amount. Rates will also be different from company to company for the same level of coverage, which is why it’s so important to compare policies from different companies — that’s where we come in.

To help simplify your shopping experience, Policygenius reviewed the five best homeowners insurance companies in Georgia offered through our website. We also calculated the average rate for several companies offered through Policygenius, the cheapest and most expensive cities in Georgia for home insurance, and the average cost for each level of coverage based on hundreds of submitted quotes.

Using that criteria, we determined the following five companies were the best homeowners insurance companies in Georgia. Read about our methodology here.

Hippo provides the cheapest Georgia home insurance quote of any Policygenius partnering carrier. The average quote with Hippo is $1,356 for around $300,000 in dwelling coverage, which is almost $500 dollars cheaper than the statewide annual average of $1,823, according to Policygenius quote data. Georgia residents looking for great coverage at a relatively low cost should consider homeowners insurance with Hippo.

Georgia residents looking to maximize coverage for their home and personal valuables against the state’s inclement coastal weather should consider MetLife GrandProtect, a premium coverage tier that offers guaranteed replacement cost protection for your home, replacement cost reimbursements on personal belongings, and multiple coverage add-ons like $10,000 in water backup coverage and $25,000 in identity theft reimbursement protection.

Georgia residents looking for home insurance savings should look no further than State Auto, a company that offers a total of nine available discounts for everything from bundling your home and auto insurance to fitting your house with smart home devices to fortified home discounts. Georgia residents who build their homes to withstand the state’s high risk of hurricane damage should take advantage of these valuable rate-saving opportunities.

Georgia residents with high-value homes should consider a homeowners insurance policy with Chubb. This luxury insurance company provides guaranteed replacement cost dwelling coverage, replacement cost coverage on all personal property, and additional services like a property manager if you have a vacation or secondary home in a coastal county of Georgia. Keep in mind that Chubb only covers homes with an insured value north of $1 million.

Average cost of homeowners insurance in Georgia by company

When comparing insurance companies, Georgia residents may find that rates differ greatly from company to company for the same level of coverage. Higher-priced policies may include coverage add-ons or have higher limits than other plans, or they may cost more simply because that insurer charges more for coverage in that particular location.

Average cost of home insurance in Georgia by coverage amount

Average cost of home insurance in Georgia by city

We selected the 20 largest cities in Georgia by population where customers have submitted quotes with Policygenius. Quotes are based on a coverage amount between $100,000 and 500,000.

The cheapest cities for homeowners insurance in Georgia 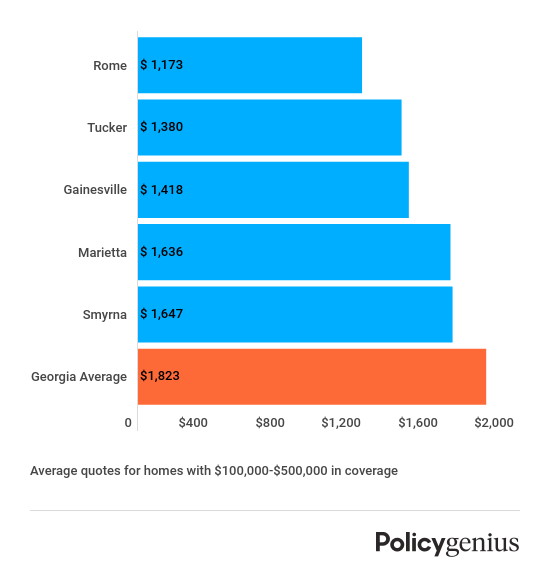 The most expensive cities for homeowners insurance in Georgia 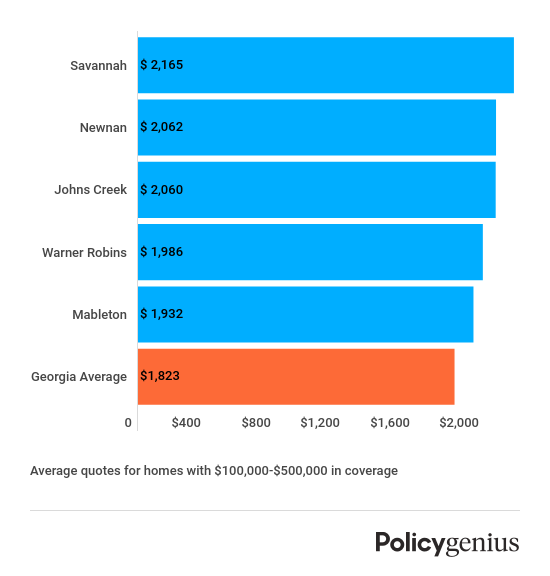 Guide to homeowners insurance in Georgia

It’s estimated that anywhere between 10,000 and 163,000 single-family homes in Georgia are at risk of property damage from hurricane storm surge, according to the Insurance Information Institute. Despite only 22 hurricanes making landfall in the Peach State since 1851, three of the 10 most costly hurricanes in U.S. history have caused property damage to Georgia (Michael in 2018, Irma in 2017, and Katrina in 2005), according to the III. It’s also worth keeping in mind that a hurricane doesn’t need to make landfall in Georgia to produce hurricane-force winds and storm surge that affect coastal properties and beyond.

Residents in the Northwest Georgia may not have the same level of hurricane anxiety as their coastal brethren, but homeowners should still be mindful of the occasional tornado and severe thunderstorms. Tornadoes cause around $44 million in annualized property loss in Georgia, according to the U.S. Department of Energy, making tornadoes the most expensive form of property loss in the state.

Homeowners insurance does not cover flood damage in Georgia or any of the other 49 states. Georgia residents can supplement that gap in coverage by purchasing a flood insurance policy. Flood insurance can typically be provided through the same insurance company that insures your home.

Georgia Office of Commissioner of Insurance and Safety Fire

The Georgia Office of Commissioner of Insurance and Safety Fire is a valuable resource for Georgia homeowners purchasing coverage for the first time and those who are already insured. The department website has helpful information about what to prioritize when selecting your coverage, comparing rates, preparing your home for bad weather, and you can even file a complaint if you’re unhappy with your home insurance company.

If you’re struggling to find coverage, you can get last-resort coverage via the Georgia Fair Access to Insurance Requirements (FAIR) Plan. The Georgia FAIR Plan is a not-for-profit insurance association that provides basic coverage for Georgia residents who are unable to get home insurance on the open market. To qualify for a FAIR Plan, you need to demonstrate that you’ve had at least three unsuccessful attempts to buy insurance from other companies.