The cost of homeowners insurance in California is $1,280 a year for the average amount of coverage. California residents can compare rates from multiple companies with Policygenius.

The average cost of homeowners insurance in California is $1,280 per year , which is a few hundred dollars less than the national average of $1,633. But insurance premiums will differ considerably based on your home, your policy, and the company you choose.

To help simplify your shopping experience, Policygenius reviewed the five best homeowners insurance companies in California offered through our website. We also calculated the cheapest and most expensive cities in California for home insurance based on hundreds of submitted quotes.

Using that criteria, we determined the following five companies were the best homeowners insurance companies in California. Read about our methodology here.

Best company for a cheap quote in California: Hippo

Hippo provides the cheapest California home insurance quote of any Policygenius partnering carrier. The average quote with Hippo is $911 for around $300,000 in dwelling coverage, which is almost $400 dollars cheaper than the statewide annual average of $1,280. California residents looking for great coverage at a relatively low cost should consider homeowners insurance with Hippo.

Safeco has four comprehensive tiers of coverage, and all include the option to add extended replacement cost, a policy add-on that increases your home’s coverage limits an additional 25% or 50% if rebuild costs exceed your dwelling coverage amount. Safeco’s highest level of coverage includes guaranteed replacement cost, which pays for a rebuild of your home regardless of the price.

The property and casualty insurance industry is often accused of being stuck in the dark ages, but don’t blame Travelers. With Travelers, you’re eligible to receive a free Amazon Echo Dot when you begin a new policy. You can also manage your policy through Travelers Skill — an Amazon Alexa program created exclusively for Travelers policyholders. You can take advantage of their Amazon affiliation some more by purchasing certain smart-home devices at discounted rates. This program not only protects your home, but it may also lower your insurance rates by as much as 20%.

One important indicator of an insurance company’s ability to pay out claims in an effective and timely manner is its financial stability, and Nationwide is among the highest-rated insurers in that area. With an A+ rating with A.M. Best, Nationwide has the highest score a company can receive with the insurance company credit rating agency. Nationwide also has high marks with Standard & Poors, which measures long-term financial stability, as well as Moody’s, which measures what the expected losses would be if a company were to go into default.

California residents with high-value homes should consider a homeowners insurance policy with Chubb. This luxury insurance company provides guaranteed replacement cost dwelling coverage, replacement cost coverage on all personal property, and additional services like appraisals and risk protection consultations, like wildfire defense services. Keep in mind that Chubb only covers homes with an insured value north of $1 million, but considering the average home price in California is $600,000, many homes in the Golden State qualify for coverage with Chubb.

Average cost of homeowners insurance in California by company

When comparing insurance companies, California residents may find that rates differ greatly from company to company for the same level of coverage. Higher-priced policies may include coverage add-ons or have higher limits than other plans, or they may cost more simply because that insurer charges more for coverage in that particular location.

Average cost of home insurance in California by coverage amount

Average cost of home insurance in California by city

Insurance companies will also price policies differently based on where you live. We found that Oakland has the highest rates in the state with a $1,593 average annual premium for $100,000-500,000 in coverage. Oaktown’s rates came in just a hair more expensive than Los Angeles, the second most expensive city for homeowners insurance in the state. The city with the cheapest rates is the state capitol of Sacramento, with an average annual premium of $862 for the same amount of coverage.

We selected the 20 largest cities in California by population where customers have submitted quotes with Policygenius. Quotes are based on a coverage amount between $100,000 and 500,000.

The cheapest cities for homeowners insurance in California 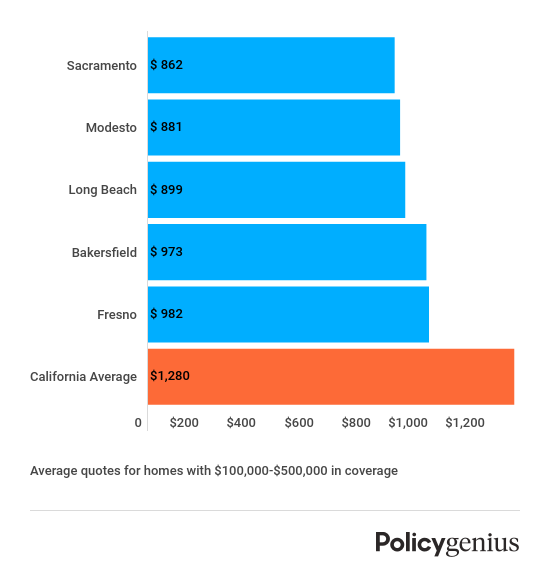 The most expensive cities for homeowners insurance in California 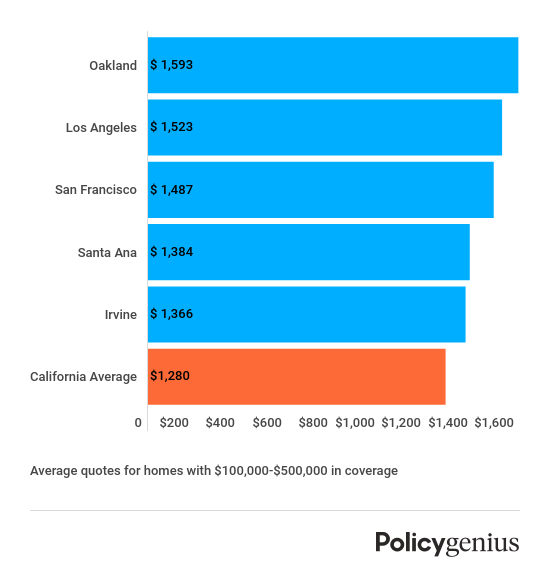 Wildfires in California: what you need to know

As wildfires in California become bigger, more frequent, and more expensive to insure, some insurers are no longer insuring homes or aren’t renewing home policies in wildfire-prone regions of the state. Furthermore, many insurance companies who do still insure homes in high wildfire risk areas may exclude wildfire damage from coverage or charge a separate wildfire deductible.

As of November 2020, California insurers have been issued a one-year moratorium from nonrenewing or canceling policies in fire-prone parts of the state. But it’s worth noting that this moratorium only lasts one year.

If your insurer recently canceled your policy and you can’t find insurance on the open market, you may be eligible for fire coverage via a California FAIR Plan. A FAIR Plan is essentially a last-resort policy for homes that aren’t insurable on the private admitted market.

One thing to keep in mind about FAIR Plans is they’re pretty limited — coverage is on a strict named perils basis, meaning you’re only covered for damage resulting from fire or lightning, smoke, and internal explosions. Coverage against windstorm damage and vandalism is available as additional coverage, but potential hazards like sudden and accidental water damage, theft, and weight of snow or ice aren’t covered. Additionally, FAIR Plan policies don’t include liability or medical payments protection, and loss of use coverage is very limited.

To supplement your FAIR plan and make sure your home is fully protected, you’ll need a “difference in conditions” (DIC) policy. The California Department of Insurance has a list of major insurers who write DIC policies.

Guide to homeowners insurance in California

Other common causes of home insurance loss in California

In addition to wildfires, California is also prone to earthquakes and mudslides — two catastrophes that aren’t covered by homeowners insurance. Even though most Californians live within 30 miles of a fault and the probability of a severe earthquake is pretty high, only around one in 10 Golden State residents have earthquake insurance, according to the National Association of Insurance Commissioners (NAIC).

Homeowners insurance does not cover flood damage in California or any of the other 49 states. California residents can supplement that gap in coverage by purchasing a flood insurance policy. Flood insurance can typically be provided through the same insurance company that insures your home.

California floods have a number of causes: high tides on the coast, landslide and mudslide-induced flooding, and fluvial floods, to name a few. As the effects of climate change and El Niño become more common and severe, it’ll be especially important for California homeowners to get this important piece of financial protection.

The California Department of Insurance is a valuable resource for California homeowners purchasing coverage for the first time and those who are already insured. The CDI website has helpful information about what to prioritize when selecting your coverage, comparing rates, preparing your home for bad weather, and you can even file a complaint if you’re unhappy with your home insurance company.

Pat Howard is a senior editor at Policygenius in New York City and an expert in homeowners insurance. He has written extensively about home insurance cost, coverage, and companies since 2018, and his insights have been featured on Investopedia, Lifehacker, MSN, Zola, HerMoney, and Property Casualty 360.