In this week's Weekend Reads, learn about the little-known charity that has Facebook's backing during Hurricane Harvey relief efforts. Then, read the next, unofficial, written-by-machine Game of Thrones book. Finally, the future is here as Domino's test drives self-driving delivery cars. 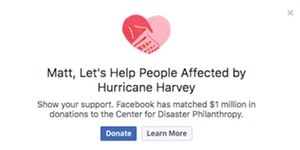 Buzzfeed Facebook Ditched The Red Cross For Hurricane Harvey Relief You may have already donated to the victims of Hurricane Harvey. If so, nice work! Even if you haven’t, you’ve probably seen some notifications in Facebook about donating. In the past, they’ve worked with the Red Cross, but this year they switched it up a bit. Now they’ve partnered with the Center for Disaster Philanthropy, a little-known organization that allocates money to local groups. Some people have been suspicious since they haven’t heard of the group before, but it’s legit. And just because an organization is a household name doesn’t necessarily make it a better choice: the Red Cross has been in hot water in recent years over how it’s handled disaster relief. So donate to CDP, or do some research on other organizations, but whatever you do, donate! Every little bit helps (and you can probably write it off on your taxes, if you need that extra motivation). 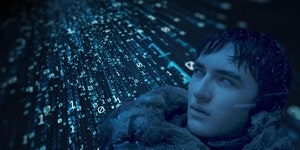 Motherboard A Neural Network Wrote the Next 'Game of Thrones' Book Because George R.R. Martin Hasn't Already breaking out in hives waiting for the next season of Game of Thrones? Given up hope on GRRM finishing a book before the heat death of the universe? Well good news! There’s a new addition to A Song of Ice and Fire! Kinda. It’s not an official entry, oh and it’s also written by a machine. Someone used AI/machine learning/neural networks/other buzzwords to feed in the existing books and create their own. The result? It confirms some fan theories (Jaime kills Cersei!) and makes some twists of its own (Sansa is a Baratheon!), all in fairly broken English. It’s not perfect, but fanfic is so hot these days, and it should be good enough to hold you over until #CleganeBowl2019 (that’s so far away…). 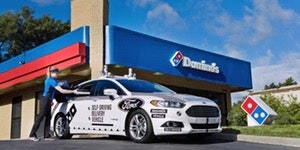 The Verge Domino’s and Ford will test self-driving pizza delivery cars First high schoolers were stealing low-wage jobs, now robots are stealing those jobs. Ford and Domino’s have teamed to start testing self-driving delivery cars. That’s right, for the very low price of a delivery fee, you can leave the comfort of your home, walk down your driveway, and get your pizza yourself. Is it worth avoiding tip? Is it worth navigating the “heatwave compartment”? Is it worth ordering Domino's in the first place? Who’s to say. The future is here, y'all.