Everyone wants to fix Obamacare except for President Trump

Open Enrollment may have ended, but health insurance has managed to stay in the spotlight months later. That’s due to the political storm surrounding Obamacare – its failings, its uncertain future, the search for a nonexistent bill (copier in tow), and a disastrous proposed replacement.

Will this saga come to an end any time soon? All signs point to...maybe? Paul Ryan has declared Obamacare the "law of the land." Democrats obviously want to keep it. Kansas is trying to expand Medicaid. But the Freedom Caucus seems to think that negotiations are still viable.If anything is to be done in healthcare, a decision needs to be made about Obamacare. President Trump has a clear mission to let it – help it – collapse. The American people seem to want the opposite, though.

A recent poll by the Kaiser Family Foundation confirms that the American Health Care Act (AHCA) – the Republican Obamacare replacement proposal AHCA – was wildly unpopular among just about everybody. But it also sheds some light as to who voters think should be blamed.Forty-nine percent of respondents say that disagreements within the Republican Party were to blame for the downfall of the AHCA, compared to 45% who say that it was due to disagreements between Republicans and Democrats.Even more enlightening is what voters think should be done with Obamacare: 89% of Democrats, 78% of Independents, and 51% of Republicans think that the Trump administration should "do what they can to make the ACA work." 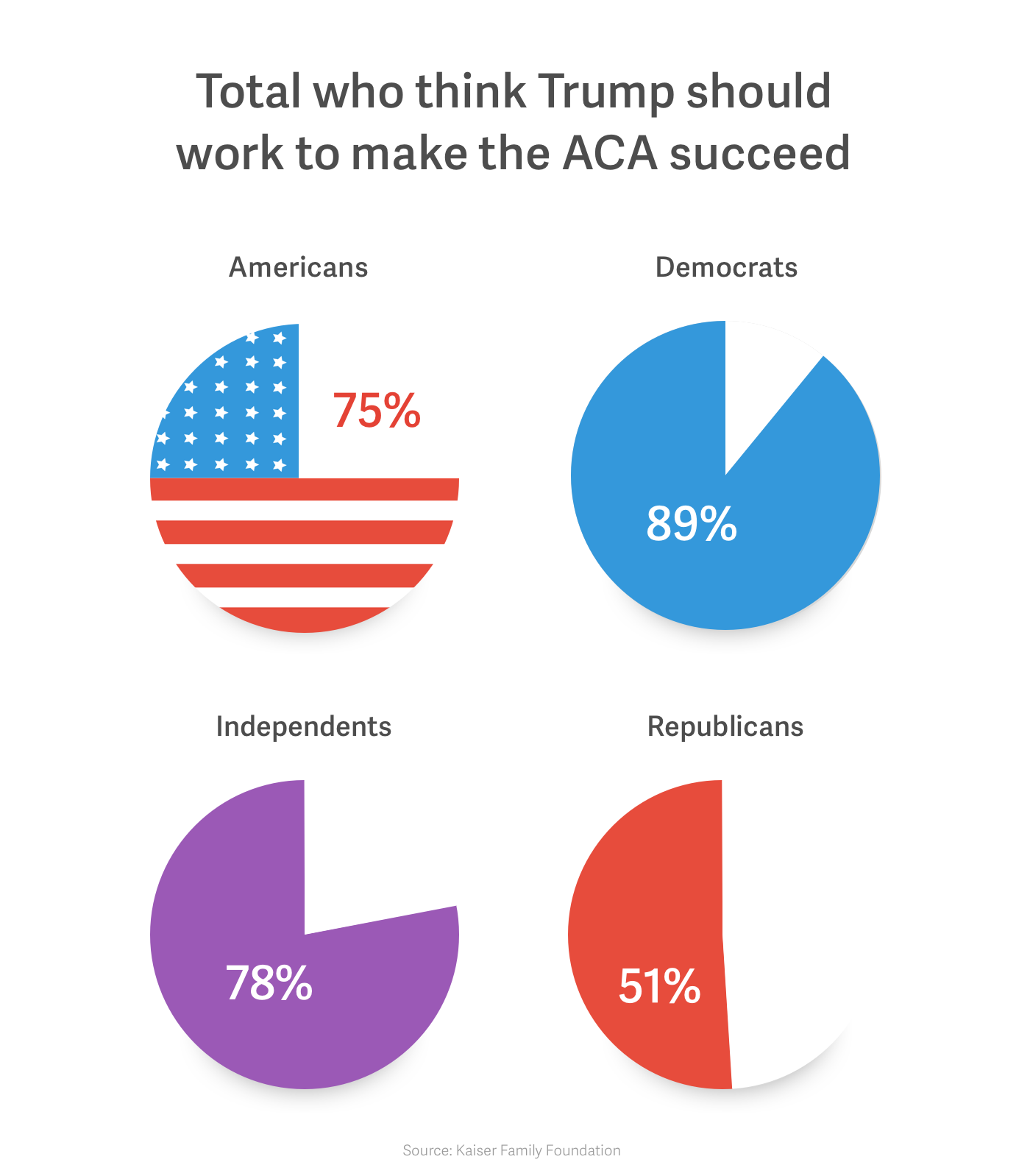 In all of the polling questions – who’s to blame, what went wrong, etc – it’s the only point at which a majority of both parties and Independents agree. It’s an issue that transcends party lines. How it can be done remains to be seen, but it’s clear what direction people want the president to move in.But will he?

With the AHCA off the table, Trump’s new political strategy seems to be playing the blame game.Obamacare has problems. Premiums spiked last year. There are an increasing number of "empty shelf" counties as insurers pull out of the marketplace, leaving counties with no insurer options. Even if the shelf isn’t completely bare, Iowa’s recent struggles – multiple insurers leaving – is still a concern. Healthy people, specifically millennials, aren’t enrolling like the Obama administration had hoped.The Trump administration can address these issues. Or, the President could exacerbate the problems by doing nothing at all. He’s chosen to do the latter.The AHCA saw opposition from all sides – Democrats, moderate Republicans, and the far-right Freedom Caucus – and Trump blamed them all in turn. It seems nearly impossible to imagine enough politicians from these three groups to pass a viable replacement option. The efforts aren’t helped by the fact that, in the eyes of the American people, Obamacare isn’t looking so bad anymore.So the new plan seems to be to force Obamacare look bad by letting it fail. Trump hasn’t shied away from this, saying that, "The best thing politically is to let Obamacare explode." The logic behind this statement is that since Obamacare is "totally the property of the Democrats," that "when people get a 200 percent increase next year or a 100 percent or 70 percent, that's their fault."But people want it to be fixed, so they won't see it that way.

There's little to suggest that Trump’s plan will work as he expects. If Obamacare collapses, someone will certainly be blamed, but it will probably be his own party, or even his administration specifically.Trumps seems to acknowledge, at least to an extent, when his supporters might be hurt. When confronted with the fact that the AHCA, which he supported, would hurt his Republican-majority counties, Trump said he knew. He just has a different opinion as to who they’ll blame for their hardships.Vox’s Matt Yglesias calls this stance "crazy" (along with a few other four-letter words):

It would be immoral, but it would also just be dumb. Donald Trump...can’t deliberately engineer bad outcomes in people’s lives — particularly bad outcomes in rural counties in red states — and then say this shows he was right all along and now Democrats are going to come crawling to the table. Like why? Which Democrats?...It doesn’t make any sense.

Voters want Obamacare to be fixed. If Trump deliberately tanks it, Democrats likely won’t be the ones to take the fall.