Talk it out: Getting advice from apps you can chat with

Apps, wearables, and other technology have made tracking your everyday habits, seeing trends, and making changes in your life easier than ever before. Working out? Wear a Fitbit. Making a budget? Download Mint. Then you check out your workout stats for the week or look at your monthly finances and you see a screen full of charts and graphs and numbers and comparisons and...wait, wasn’t this supposed to make things easier? Why can’t your phone analyze it for you and give you advice and encouragement in plain English?Like dates, taxis, and a place to crash, help and advice is now something you can find with your phone on demand. Chats and texting style interfaces are all the rage these days – the only question is whether you want to talk to a real person or a robot. Okay, so maybe "robot" is a bit of a stretch. You won’t be having a conversation with C3PO. But there are apps out there where you can talk to and get tips from an electronic buddy. Think those old instant messenger chat bots, except actually useful.

There are good reasons to do this. First of all, you don’t want to go through things alone. Encouragement and rewards go a long way in helping people achieve their goals, and a pat on the back – even from an app – can be what you need to take that next step.

It also helps to simplify things. You could go back to look at a week’s worth of meals, one by one, to see what you’ve eaten too much of, or you can just say what you’ve eaten and get a response along the lines of, "Cut back on the burgers. This is the fourth time this week."

See, it’s like talking to a friend. A hyper-aware, super concerned friend.What can you get help on using chat apps (besides eating fewer burgers)? As it turns out, a lot of things. Health and fitness, personal finance, general advice, and therapy all have players making a splash in this space, and more are sure to follow.

Download: iOS, AndroidNot sure what you should be doing to get in shape, but can’t afford a personal trainer? Download Lark. With Apple’s Healthkit and Google Fit gaining prominence and wearables really starting to take off, Lark is one of many fitness apps taking advantage of health tracking. 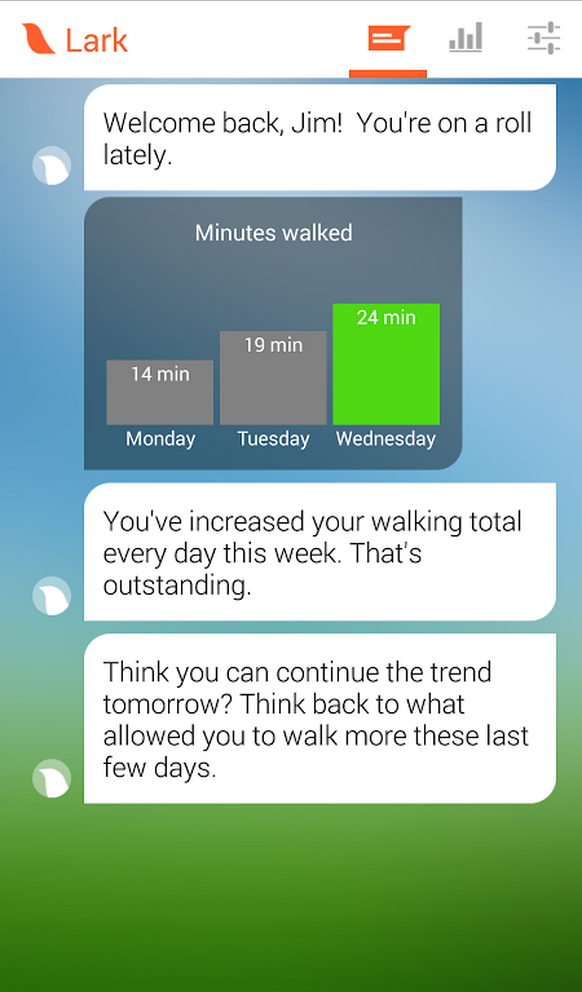 Lark does things a little differently. Sure, it tracks your activity and gives you a breakdown of everything, but Lark sets itself apart from the competition by including a chat function with a "personal trainer." You (hopefully) won’t be confusing Lark with a person any time soon, but it does come in handy.Using a combination of data pulled from your phone and snippets you tell it about what you’re doing, how you’re feeling, and so on, you’ll get updates on your fitness goals and advice on food, exercise, and habits that can help you throughout your day. All you have to do is type (or speak) the information it asks for and Lark will respond appropriately. Prepared words and phrases, like "Thanks" and "Got it," help move things along so you aren’t stuck trying to figure out what to say next. What are you, talking to a real person?Lark doesn’t give you information you can’t find on your own with a little digging, and it won’t give you a tailored diet to follow, but users are clearly enjoying the fun, easy chat function: more than 300 million texts have been exchanged since launch. Between the data it automatically pulls and the fact that you can add details like meals just by speaking into your phone, it’ll help you take that next step toward your fitness goals.

Download: iOS, Android Once you have the body of a Greek god, it’s time to turn your sights toward your finances. What have you tried in the past? Mint? Level? Monefy? Those are helpful, but once again you’re given a lot of information and then left to figure out what to do with it all by yourself. Penny provides a straightforward look at your spending habits to make budgeting easy. 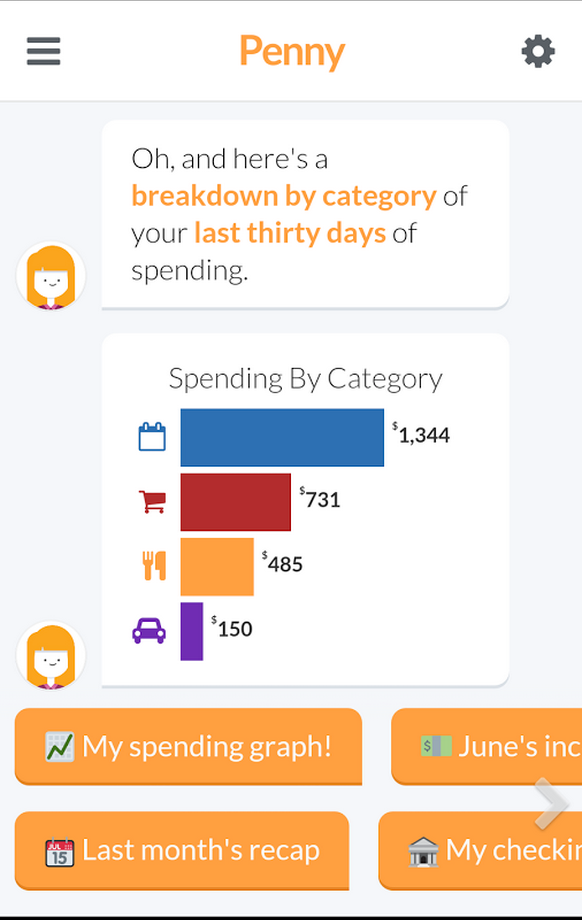 Penny is very similar to Lark in its mix of automated data, user commands, and especially its chat function. You get a little more personality than Lark: your personal finance coach is given a face and a name (Penny - get it?) which helps to humanize things and make it more fun. She’ll even post GIFs, the Internet’s favorite things since cats, which Lark doesn’t do.Right now Penny is limited to a few large banks like Citibank and Bank of America. If you’re a member of one of them, linking your accounts to Penny is as easy as logging in to your bank. If you use local or smaller banks you’re out of luck for the time being. When I wanted to add a bank that wasn’t listed I was prompted to give Penny the name; presumably individual banks will be added as demand for them grows.Once your accounts are up and running, there isn’t a whole lot to actually do in Penny. There’s a page for transaction history, which is limited to five categories and isn’t as robust as something you’d find in Mint. The commands when chatting with Penny are pretty simple, too. She’ll let you know various account balances and what you’re spending money on, and compare it to previous months.That’s really all there is to Penny. If you’re looking for something more in-depth, where you can get a more granular look at your spending, you’re probably better off elsewhere. But Penny is still in the early stages, and it’ll continue to improve as the company adds more features and banks. If you want something simple to start a budget, or something that’s a little more fun to use than your standard app, Penny is a great start.

Download: iOS, AndroidSo is a robotic call and response the future of advice apps? Are we taking the first step toward Skynet? Not necessarily. If you’re a person who would rather talk to...well, a person, you’re covered there, too. 7 Cups of Tea, for example, gives you on-demand advice from a real live human, all from the comfort of your own home. 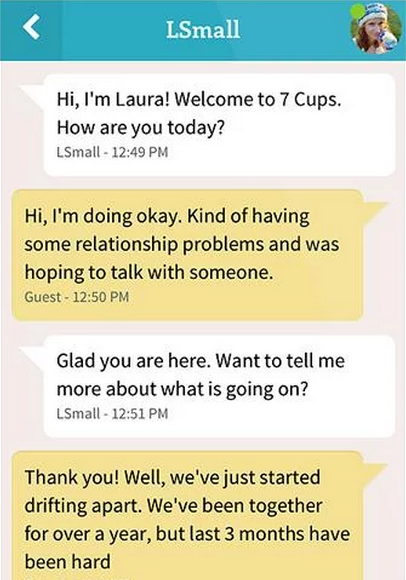 Instead of just one person on the other end, 7 Cups of Tea has a community of over 70,000 volunteers ready to listen and give advice. Anyone can volunteer to be a listener, but it requires a training course on active listening (complete with quiz), a review, and a background check, and a community review system is in place. Listeners tackle a whole host of problems from bullying to work stress to eating disorders. You can choose your listener based on your age group, problem, and language, and you’ll be instantly connected.When you’re chatting with a listener your identity is kept anonymous, and if you’d like more opinions there’s also a group chat option where you can solicit advice from other users. 7 Cups of Tea won’t replace help from a professional therapist, and they’ll point users in that direction for more serious issues like self-harm, but if you just need to talk about issues plaguing you, 7 Cups of Tea ensures that you can find someone 24/7.

Download: iOS, AndroidIt’s late. You’re not feeling well; you don’t know what it is, but it’s been lingering for a few days now. The doctor’s office is closed. You could try WebMD, but you’ve played that game before, and it ends with you spending few hours clicking through page after page reading symptoms after symptom. You really need a doctor’s opinion. Why not use HealthTap? 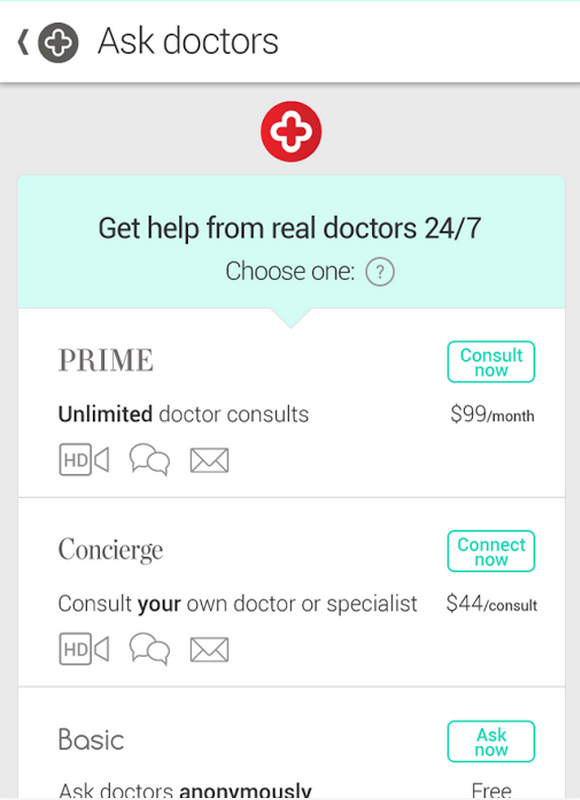 HealthTap has a lot of useful medical articles and advice available for free, like physician-curated checklists and previously asked questions. But its real meat is its "telemedicine" feature: like something from the future, HealthTap gives you a virtual consultation from a real doctor. But it’ll cost you anywhere from $44 per consultation with HealthTap Concierge to the $99/month subscription-based HealthTap Prime, which provides unlimited consultations. That’s a little steep for some, but many will find it well worth the peace of mind they’ll get knowing there’s a doctor a button tap away.Will HealthTap replace doctor visits? No, and it’s not supposed to. There’s no substitute for in-person exams. But HealthTap should hold you over until you can set up a visit with your regular doctor.

So what’s the verdict? Well, we haven’t lost our jobs to machines yet. Lark and Penny are useful but don’t provide much that you can’t get with a few extra button pushes on other apps. Having a person to talk to as opposed to a program to "talk to" still feels reassuring and allows for complexities that are currently unmatched by digital alternatives.Still, this is only the first wave of chat apps hitting your favorite devices and it’s possible we’ll see less human interaction going forward. We already have digital assistants in our everyday lives, like the iPhone’s Siri, Cortana on Windows devices, Alexa from Amazon’s Echo, and even IBM’s Jeopardy-winning Watson helping you decide what meals to cook. At the moment automated chats are little more than just a new way to interface with apps, but it isn’t hard to imagine a world where we won’t even be able to make the distinction between a person or a program on the other end.