Which states could legalize marijuana in 2017? 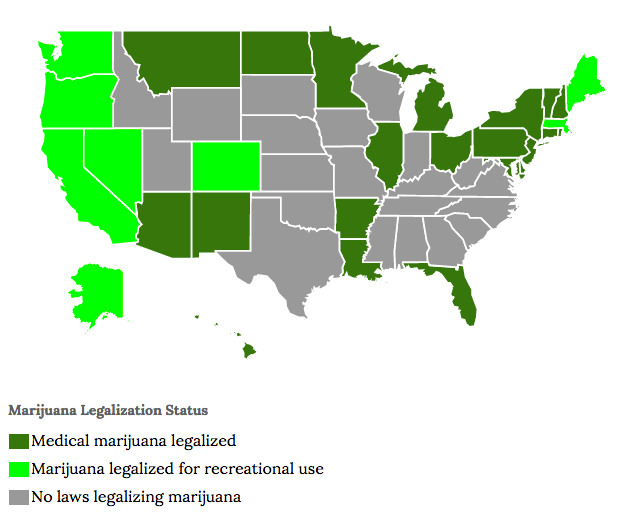 Since the beginning of 2017, 27 state legislatures have considered bills related to marijuana. Proposals range from adding PTSD to Colorado’s medical marijuana program to prohibiting Californian authorities from aiding federal prosecution of the marijuana business.While medical marijuana bills in Republican-controlled states like Indiana and Kansas likely face an uphill battle, some believe it is an encouraging sign that even deep-red states are proposing marijuana reform. Many states that already have medical marijuana programs are now pushing for full recreational legalization. In Maryland, for example, legislators in the state house and Senate have proposed a system of recreational marijuana retail licensing in which all sales would be subject to a 9% tax.

For a state like Rhode Island, which does not allow ballot measures, a state legislature bill may be the only path to legalizing marijuana. This is the third year that a recreational marijuana legalization bill has come up in the Rhode Island legislature, but its proponents feel that momentum from nearby Massachusetts may push this bill over the edge.However, not all bills are in support of further legalization. Legislators in Arkansas, for example, aim to restrict the smoking of medical cannabis and to allow cities to ban medical marijuana dispensaries.After a ballot measure legalized medical marijuana in Massachusetts in November, the state legislature is now scrambling to turn the citizen-approved initiative into actual policy. A state senator is proposing a much-discussed bill that would restrict the number of ounces and marijuana plants a household can actually possess. Jason Lewis, sponsor of this new bill, argues that the details of the ballot measure do not make for safe and responsible policy. As the chairman of the state’s new House-Senate committee on marijuana, Lewis is currently dealing with 44 bills related to marijuana legalization, ranging from packaging requirements to total repeal of the ballot measure. The ongoing controversy in Massachusetts demonstrates that even when the mandate for legalization is clear, the implementation process can be an entirely different battle.

The table below provides a full list of states with medical or recreational legalization bills on their legislative dockets:

As 2017 progresses, make sure to keep an eye out for how these marijuana-related bills fare in your state legislature. And check out BallotReady to learn more about all the state legislators and ballot measures you need to know to vote informed.