How to retire early: tips from Jackie the super saver 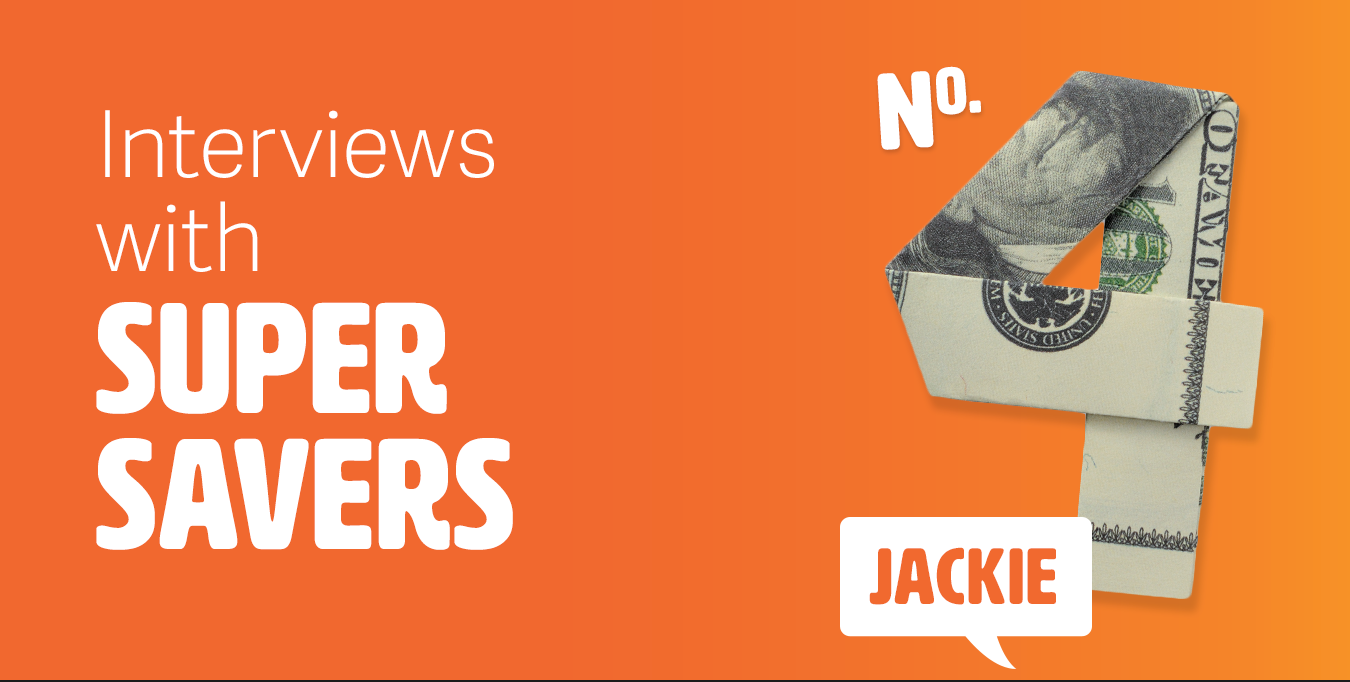 Our next subject is Jackie, whose ability to keep her family living well below their means kept her and her husband sleeping easy while their jobs at the Department of Defense were furloughed in 2013. Cutting costs where she can—literally, she lets her husband cut her hair—Jackie uses thrifty tricks and smart investing to create financial stability.

Where do you think you developed your spending personality, and is there anyone who you think heavily influenced it?

I think we’ve all been broke before, and I just decided early in my 20s that I wasn’t going to live paycheck to paycheck. So, I also decided that I want to quit working as quickly as possible. But I’d say that my mom has influenced my spending habits the most. I mean, we can both spot a clearance rack a mile away, even if it’s in the back of a poorly lit store and our view was obscured by an army of mannequins and clouds of tear gas. I would say that she influenced me the most for sure.

Why do you choose to manage your money the way that you do?

So my husband and I want to retire early and we both know that the road to early retirement is paved with nothing but money, and that money is the result of only hard work, disciplined saving and smart investing.

What are some ways you save money that could be seen as unconventional?

Well, my husband and I started cutting each other’s hair in college, and we still do today. A lot of people might think that’s weird. We recently just got digital cable, but we went without it for like seven years, so that was an expense we haven’t had to experience in a while. Additionally, my husband does the maintenance on both of our vehicles, and we don’t really exchange gifts for any kind of occasion, including birthdays and anniversaries.

What is your thought process before you make a purchase?

Of course I ask myself the standard questions like "Do I really need or want this," "is there a cheaper alternative," "will it put us in a shaky financial situation or jeopardize our savings goals," so the bottom line for me is I work hard for my money, so I should think even harder before spending it.

What is the funniest thing you’ve done to save money?

I’ve made my own pore strips before, with a little bit of gelatin mixed with milk. I’ve also baked treats for my dogs, but one thing my brother and sister constantly make fun of me for is that I still listen to CD’s in my car, because I don’t own an iPod. That’s just how I roll.

When you do spend money, what is your attitude like? What do you like spending money on, and do you ever get buyer's remorse?

So spending money doesn’t really bother me, it’s wasting money or overpaying for things that does. So, there are plenty of things I enjoy spending money on: my dog Dixie, dates with my husband, burrito bowls from Chipotle, video games, you know. But no, I don’t really get buyer’s remorse

What opportunities has being a super saver given you that you might not have had if you weren’t one?

So, my husband and I both work for the Department of Defense. If you remember last year, a lot of us were furloughed due to budget issues. So, we were forced to take two days of unpaid leave per pay period for a total of like six pay periods, so basically a 20% cut for three months. So, during that time the the majority of our coworkers, you know, some that had way higher salaries than we did, were worried about falling behind on bills. Some were actually even talking about foreclosure and bankruptcy, you know, some said that their clearance might be in jeopardy. But James and I, on the other hand, were pretty excited about getting three-day weekends. I mean, we were hakuna matata the entire time because we are super savers and we live well below our means. So, it really gave us the opportunity to enjoy ourselves while other people were worried about how to make rent and put food on the table.

What advice would you give someone who needs to start saving money?

Oh, wow, they need to start right now, and you should put that in capital letters with multiple exclamation points. Seriously, if the power of compounding interest could somehow be harnessed, then we would be able to solve the energy crisis for sure. I mean, it’s time that’s the bigger factor, so even if it’s a small amount, they need to start right now, and they need to never stop. But, basically, you need to create as big of a gap as you can between what you make and what you spend. Then, save and smartly invest as much of that as you can. So, you need to focus on both sides of it - both increasing income and cutting expenses. So, other things you need to be aware of are always automate. You know, stay properly insured, keep a fully stocked emergency fund, you know, beware of things like lifestyle increase, and always, always, know exactly where your money is going.

I pretty much track every dime of our money on a pretty extensive spreadsheet. I mean, I am an accountant, that’s just how I do it. But we don’t necessarily have a set budget. I don’t, you know, at the beginning of the month i don’t pull out $500 and say "Okay, this is what we have for food." Basically, I’ve automated our savings so that any money hitting our checking account that isn't earmarked for bills is just gravy. So basically, we pay ourselves first, bills second, and any residual amount can be spent as we please.

Are there any unconventional ways you make money?

I guess there’s one. I wouldn’t say that I’m a hardcore, extreme credit card churner, but I do maximize the rewards cards that we have. We try to put every expense we have on our cards to get the cash back and then, we of course never carry a balance. So, I’ve even gone as far as to pay one card off with another to get even more points, you know, to piggy back them. I can make several hundred bucks a year doing this with very little effort involved.