"Do not put something that measures time onto a device that forces the user to wait."

I’m guessing that’s not an actual design rule, but after two full weeks with an Apple Watch Sport, I say it should be.There is a second design rule I would also like to suggest:

"Do not create a device that turns itself off repeatedly while the user is trying to use it."

In my world, these two rules would be common sense even to a baby. But at Apple thinking is different, and therefore the Apple Watch is a beautifully made object that is fundamentally opposed to my design principles.And that’s why, after two weeks of wearing an Apple Watch Sport model, I’m returning it. I’ll probably go back to my Fitbit Charge, as sad as that sounds, but at least the Charge does what you’d expect it to do. 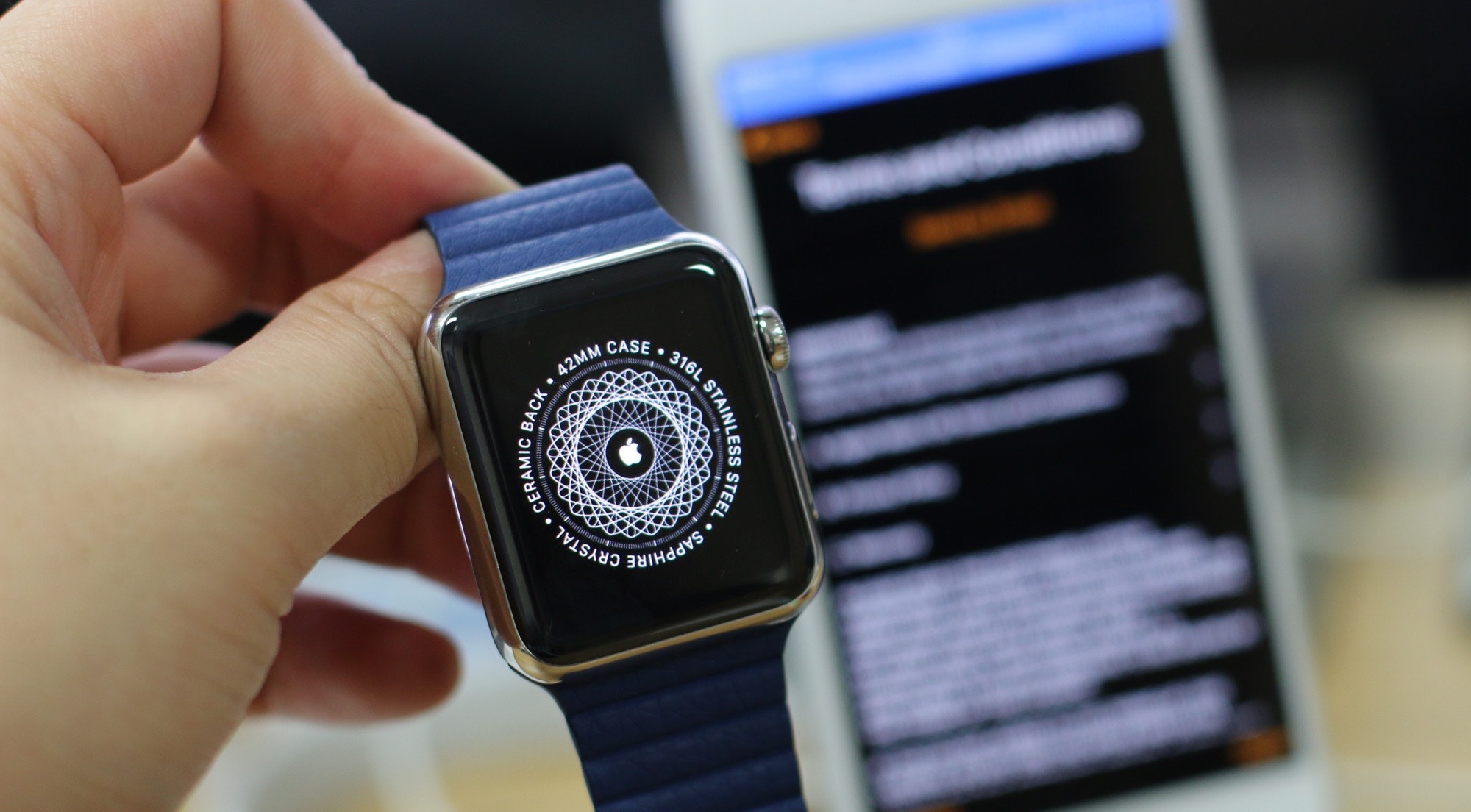 #1 - The aggressive battery-saving behavior of the Apple Watch is making me neurotic.

Like everyone else, I was worried about battery life for the Watch. And like everyone else has discovered, this is not a problem. I’ve never run out of juice over the past 2 weeks. It’s well-designed in this respect.…Well—I mean, there are tradeoffs. But there always are, right? Sometimes the screen turns off while you’re trying to use the watch. Okay, a lot of the time. Pretty consistently, in fact.This is more than a small annoyance, but on its own, not necessarily a deal breaker. Except for one thing, which is that the act of constantly feeling I’m running out of time to use my watch is starting to negatively influence other aspects of my life. Here’s an example. A few moments ago I stopped typing so I could think about how to phrase the rest of the sentence, and while I thought, I kept nervously moving the cursor back and forth to prevent my laptop’s screen from going dark. That’s right—the Apple Watch has made me afraid of my laptop’s screen shutting off.It’s affecting me in more direct ways, too. For instance, any time I engage with my watch now I feel a little tense because I feel like I’m fighting with the thing instead of using it. I’ve developed a habit of lightly tapping the screen every few seconds while waiting (and waiting) (and waiting) for something to load. And I’d prefer not to develop any more unusual tics, to be honest.

Maybe you think I’m overreacting? Imagine if you were playing a video game on your fancy new TV and you reached a loading screen. And while you waited for the game to load, the TV was like, "This is a good time for me to save some energy, bye bye." You’d return that TV, right? If you answered yes, don’t buy an Apple Watch.

#2 - It’s impossible to use any third-party app in a casual manner while walking down the street.

"That’s okay," you might tell yourself. "I’ll only use the third-party apps that offer ‘glance’ views." Good luck with that, you handsome but naive sucker. Unless you recently viewed that specific glance—and more than likely waited through multiple screen blackouts (see above)—there’s a good chance the app’s glance will be completely useless to you while you’re on the move.It was easy, in the first few days of using the Watch, to blame this on the app and just delete it from my Watch. But after two weeks I now realize that all the apps are like this. There are times when I will finally just abandon whatever I was trying to do and switch over to my iPhone, or give up on the task entirely.This leads to a true life scenario where, say, I’m at the supermarket, and after fumbling with my Watch for 20 seconds or so I tell myself, "I guess I don’t really need to see my shopping list right now." In moments like that, my Watch becomes the Monkey’s Paw of time-saving devices—I may get my wish, but I probably won’t like the way it was granted.

It’s cool watching the Watch measure your pulse, but naturally you have to wait a little bit while the Watch shoots deadly lasers into your bloodstream (or however it works—I’m not a scientist). After a while, though, you start wondering, "Does every app measure my pulse?" Because then at least that would explain the similar wait times elsewhere.Wanna know my secret for getting an app to update when it’s still showing the "loading" indicator after 3 or 4 screen blackouts? I pull out my iPhone and launch the real app, because there have been a few times when that’s made the Watch version suddenly refresh, and I am a sucker for magical thinking.But yes, that means in order to use my Watch more efficiently I use my iPhone at the same time. If this strikes you as the opposite of what you would call increased productivity, don’t buy the Apple Watch.

#3 - The music functionality is borderline useless.

Playing music from my Apple Watch was one of the things I looked forward to the most, but it turns out it’s not that good at it. You’ve got several gigs of space on the watch but you can only ever store one playlist at a time, and that playlist must remain on your iPhone or it will be deleted from the Watch, even though the songs have already been copied over.While this ruins its use as a super fancy MP3 player, the Watch still works pretty well at the gym. Well, unless you are the type who likes to mix up your playlists regularly. Because then you’ll think, "Okay, I’ll just sync my new playlist and then head off to the gym," and you will be disappointed.Why? Because apparently one of the innovative ways the Apple Watch conserves power (other than not powering the display) is that it uses the ancient cellular art of osmosis to transfer music from your iPhone. This implementation does have an unfortunate side effect, which is that it may take upwards of 15 years to transfer the one playlist, even if that playlist contains only one three-minute song. Osmosis follows nature’s laws, not man’s.

Also, let me provide some advice for future music transfer troubleshooters. If the sync hasn’t shown any progress at all, or hasn’t even started, after, oh, let’s say half an hour? then give up, restart both your iPhone and your Watch, and try again. That usually solves the problem. Or you can just not buy it.If you really need a bluetooth music player for the gym, may I suggest the $150 iPod nano? Sure, the horribly ugly interface will make people think you shop at Chinavasion, but it’s so light you can practically stick it under your tongue, and you can pick a playlist and start playing it in a couple of seconds. In that same length of time on the Watch, you’ll still be desperately trying to Force Touch your way to the submenu so you can tell it to stop blasting your Embarrassing Workout Mix at full volume on your iPhone. If that sounds like a situation you would rather avoid, don’t buy the Apple Watch.

#4 - Paying with your watch is awkward and uncomfortable.

Right now Apple Pay depends on the cooperation of retailers to work, and so it can be a challenge finding an opportunity to use it. But when the pieces fall into place and you hold your iPhone out and complete a payment in 2-3 seconds, it’s a pleasant experience.When you try the same thing with your Watch, it’s slightly less pleasant because you’ll be—well, imagine a monkey fumbling with a tennis racket. Now imagine you are the monkey and the handle of the racket is your forearm. That’s what you will look like as you try to wrangle your watch into position so the scanner will beep its approval.

You might be able to argue that some of the problems above will be addressed in future software updates, but there's no way to update a resentful cashier who won't hold out the scanner, which means you're forced to climb halfway onto the counter just to use your new toy. If you do not enjoy performing awkward modern dance contortions while in line at a Starbucks, perhaps you should not buy the Apple Watch.

#5 - It doesn’t pass the "What if this were made by a different company?" test.

Basically, if I’d bought this from Samsung I would have already returned it. I’ve only been hanging on to it because Apple is good at selling attainable luxury to the middle class, and having some attainable luxury always helps take the edge off of one’s existential terror.But in truth, it reminds me—and I mean this seriously and not as a burn on either company—of the underpowered Nokia handsets that were coming out right around the time of the first iPhone. Nokia was releasing some pretty cool hardware back then, but tried to save money and prolong battery life by underpowering the devices.* I returned my Nokia 5800 a couple of days after buying it for the same reason I'm returning the Apple Watch.Except for the amazing N95—I’ll always love you, little guy.

If you would not buy an equally beautiful watch from Samsung that had the same problems I’ve described above, do not buy the Apple Watch.

There are definitely things I love about the watch, so in the spirit of fairness I’ll share them here. But none of these is enough to offset the more serious issues listed above.

If after reading my complaints above you’re still thinking, "Yeah, but is it good enough for me?" then here’s my advice. If you’re the kind of person who actually wants an Apple employee to help you set up your new computer before you leave the store (ha ha), you might not even notice some of these flaws. I think this first version of the Watch is aimed more at people like you than people like me. It’s a great fitness wearable, a terrific actual watch, and a pretty good daily calendar reference.