Whether you’re just starting to repay student loans or you’re looking for a new repayment plan on old loans, there are a lot of options available to lenders. Unfortunately, student loan repayment plans are complicated and full of fine details, making it hard to compare plans and figure out which one is best for you.We created the chart below as a resource for comparing the different plans available to borrowers. Scroll down past the chart to read more detailed information about each plan, other repayment options, a glossary of terms, and a list of sources.One fact that stays constant? The lower your monthly payment, the more interest you’ll pay in total. In exchange for a more manageable monthly payment, you’re agreeing to keep your debt for a longer period of time, letting more interest accrue. Many borrowers have no choice: the default plan’s payments can be incredibly high for borrowers just out of college or in public service careers. Our advice is to make the highest possible payments that you reasonably can every month. But don’t overextend overself. It’s much better to pay more interest in the long run than it is to default on your student loans. 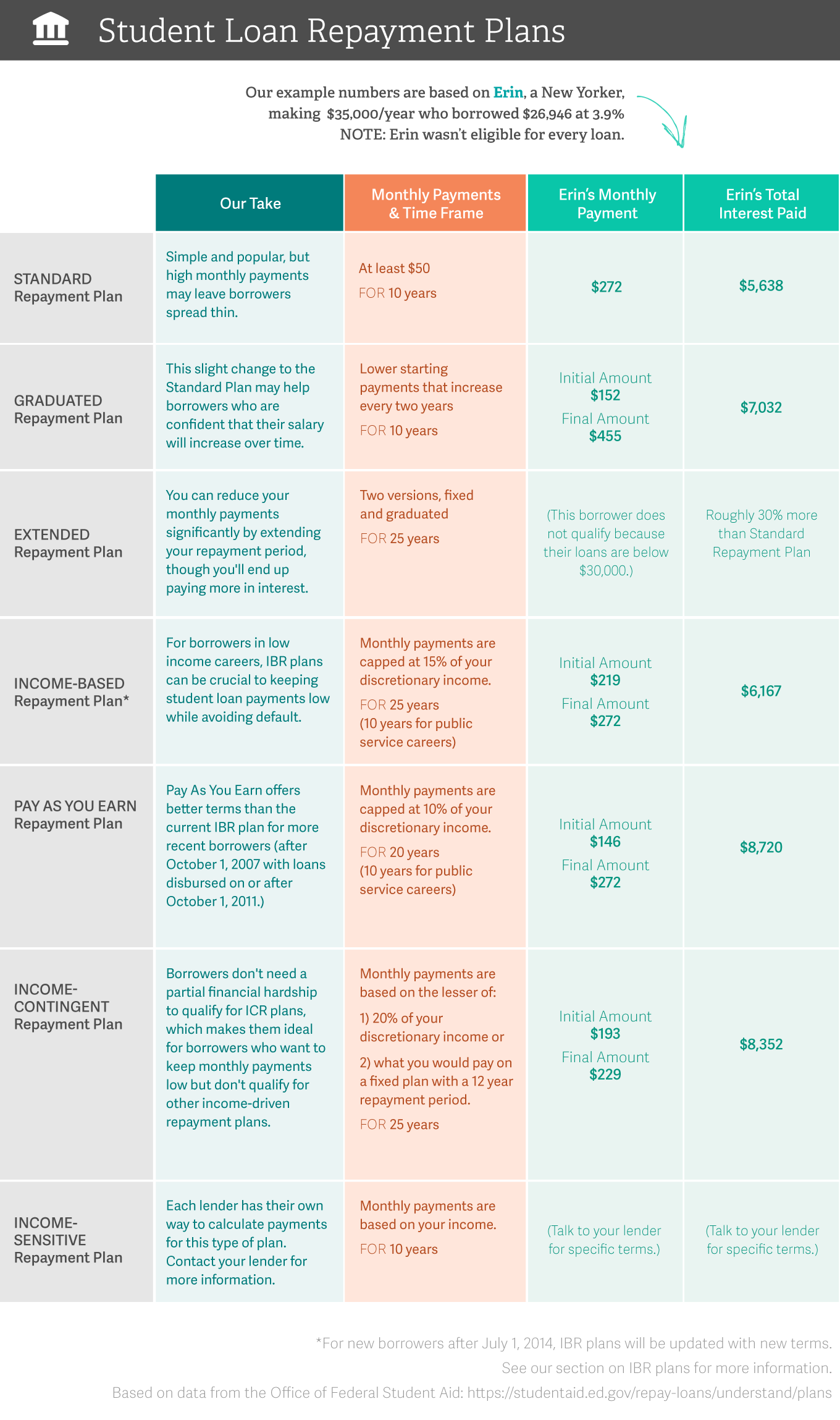 How we calculated examples

In the summaries of repayment plans below, we’ve included examples of what a New Yorker with a salary of $35,000/year and is single would pay per month with each plan. This salary is a composite of averages from across the 22 to 27 year old age range. We based these examples on the "average loan" calculations from the Office of Federal Student Aid Repayment Estimator for a four-year public college: $26,946 with an interest rate of 3.9%.Examples are included solely to illustrate the differences between plans. They are not meant to illustrate your personal loans. After reading through this guide, we suggest you use the Repayment Estimator or contact your lender in order to figure out the best plan for your current financial situation.

Plans Not Based On Income

The Standard Repayment Plan is the default repayment plan. If you don’t apply for one of the other repayment plans, you’ll be automatically enrolled in the Standard Repayment Plan when your grace period ends. Not coincidentally, it’s the plan that the majority of borrowers choose - 65% of all borrowers are on the Standard Repayment Plan.The details are simple. Make monthly payments every month for 10 years (120 months) until you pay off your loan (with interest). This is the fastest way to pay off your loans while paying the least amount of interest (unless you happen to win the lottery and can pay them off all at once).So what’s the downside? Super high payments. The more debt you have, the higher the payments, starting at a minimum of $50, but growing as high as $300 to $400 per month.Our example borrower would end up paying $272 per month and would pay $32,585 in total, with $5,638 of that being interest. The standard repayment period is 120 months. 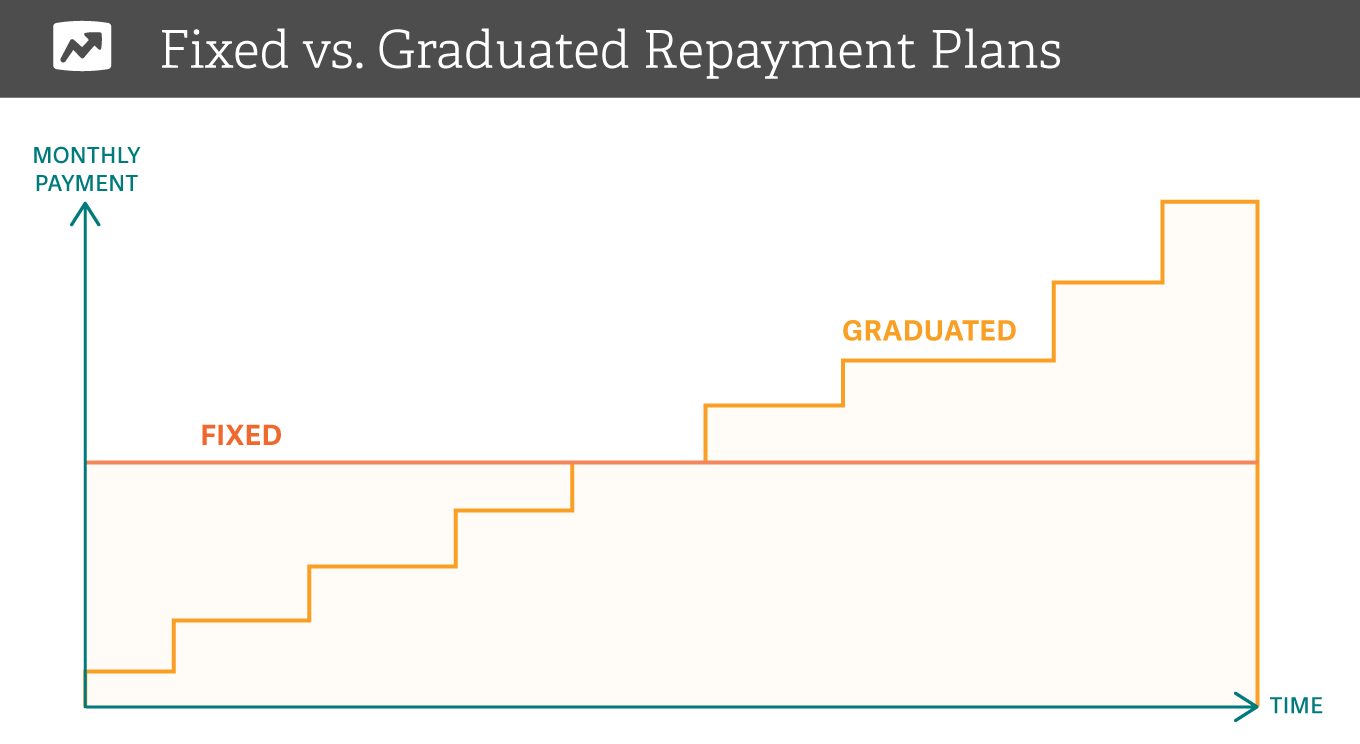 While payments on this plan start lower than the Standard Repayment Plan, they will end higher, with an increase coming every two years. Graduated Repayment Plans still have a time frame of 10 years, but because you start with lower payments, you’ll end up paying more in interest than with the Standard Repayment Plan.Our example borrower would start by paying $152 per month and end by paying $455 per month. They would pay $33,979 in total, with $7,032 of that being interest. The standard repayment period is 120 months.

Plans Based On Income

We know that this looks like a wall of text that you probably don’t want to read. Stick with us! Income-Based Repayment Plans are incredibly useful despite being more complicated than the plans outlined above.Income-Based Repayment (IBR) Plans are available to any borrower with a partial financial hardship.According to Equal Justice Works, a partial financial hardship "exists when the annual amount due on all of a borrower’s eligible loans, as calculated under a standard 10 year repayment plan, exceeds 15 percent of discretionary income."Discretionary income is determined by taking your adjusted gross income and subtracting 150% of the poverty line. If your income is near or below 150% of the poverty line, your monthly payment will be zero. Otherwise, your monthly payment will be capped at 15% of your discretionary income.The 2014 Poverty Guideline from the U.S. Department of Health & Human Services is $11,670 for a single person household in the 48 contiguous states. 150% of that is $17,505. Using our example borrower’s salary of $35,000/year, we calculated that their discretionary income would be $17,495/year, or $1,457.92/month. 15% of that monthly discretionary income would be $218.69, lower than the Standard Repayment Plan’s monthly payment of $272.The maximum repayment period under the IBR plan is 25 years (300 months). Any remaining balance on your loans after 25 years will be forgiven. At the end of 25 years, the remaining balance forgiven will be treated as income, meaning that you will have to pay income tax on the remaining balance. A limited amount of your interest will also be forgiven.If you’re going into a career in public service, you can get your loans forgiven after a 10 year repayment period. There are several restrictions on this program, however, so if you’re in a public service job, we suggest you check out the federal government’s fact sheet on the Public Service Loan Forgiveness Program.A new version of the IBR program went into effect for new borrowers as of July 1, 2014. The updated version caps monthly payments at 10% of your discretionary income and institutes a maximum repayment period of 20 years (240 months).Borrowers with an IBR plan must supply their lender with their latest proof of income annually in order to stay enrolled. Monthly payments will be recalculated every year based on this new information.Our example borrower would start by paying $219 per month and end by paying $272 per month. They would pay $33,114 in total, with $6,167 of that being interest. They would pay off their loan in 127 months.

Pay As You Earn Repayment

Pay As You Earn (PAYE) has a straightforward name, but the details are more complex. Similar to the IBR program, PAYE plans are based on partial financial hardships and your discretionary income.Once enrolled in a PAYE plan, borrowers’ monthly payments will be capped at 10% of monthly discretionary income. Repayment periods are capped at 20 years (240 months). After 20 years, your loans will be forgiven, though you will have to pay income tax on the forgiven amount. Borrowers in public service careers can have their loans forgiven after 10 years.Like IBR plans, PAYE plans require that you annually supply your lender with updated proof of income.PAYE plans are only available to new borrowers after October 1, 2007, and must have received a disbursement of a Direct Loan on or after October 1, 2011.Our example borrower would start by paying $146 per month and end by paying $272 per month. They would pay $35,666 in total, with $8,720 of that being interest. They would pay off their loan in 161 months.

While Income-Contingent Repayment (ICR) Plans are based on income, they do not require a partial financial hardship. This makes ICR plans perfect for borrowers who want to keep monthly payments low, but don’t qualify for an IBR plan or Pay As You Earn.Your monthly payment for an ICR plan will be based on one of two metrics: 1) 20% of your discretionary income or 2) what you would pay on a fixed plan with a 12 year repayment period. Your monthly payment will be based on whichever metric produces the lower number.ICR plans have a maximum repayment period of 25 years, after which any remaining balance will be forgiven.Our example borrower would start by paying $193 per month and end by paying $229 per month. They would pay $35,292 in total, with $8,352 of that being interest. They would pay off their loan in 168 months.

Each lender’s formula for an Income-Sensitive Repayment Plan varies. They are only available for Stafford Loans, FFEL PLUS loans, and FFEL Consolidation loans.Our example borrower does not qualify for this repayment plan.

If you cannot afford to pay your student loans and you are not eligible for a plan that allows you pay a lower monthly payment, there are options.Deferment allows you to postpone making payments for up to a year. Borrowers are entitled to deferments if they meet the requirements, which can be met by proving extended unemployment or other financial hardship, active military duty, or one of the other situations (full list here). The government will also pay interest on Federal Perkins Loans, Direct Subsidized Loans, and Subsidized Federal Stafford Loans during a deferment period. Other loans will accrue interest during a deferment. Interest may also be capitalized during this time.Forbearance also allows borrowers who don’t qualify for a deferment to postpone making payments for up to a year, but it comes with a set of stipulations that may make it unattractive. Unlike deferments, most borrowers are not entitled to a forbearance (there are a few exceptions, outlined here). Interest may be capitalized during a forbearance, creating a more expensive loan.You may qualify for loan forgiveness based on volunteer work or other public service work. For more details, check out this summary of loan forgiveness programs by FinAid.

What plans do I qualify for?

Here is a partial glossary of terms mentioned in this article. For a larger and more robust glossary, check out the Office of Federal Student Aid’s Glossary.Capitalization - when unpaid interest is added to the principal of a loan, increasing the amount of outstanding principal and possibly increasing monthly payments (new interest will also be charged on that larger principal, increasing the overall cost of your loan)Discretionary income - the difference between your adjusted gross income and 150% of the poverty line, currently set at $11,670 for a single person household in the 48 contiguous states (see example calculation)Partial financial hardship - when the annual amount due on all of a borrower’s eligible loans, as calculated under a standard 10-year repayment plan, exceeds 15 or 10 percent of discretionary income (depending on the repayment plan you are applying for)