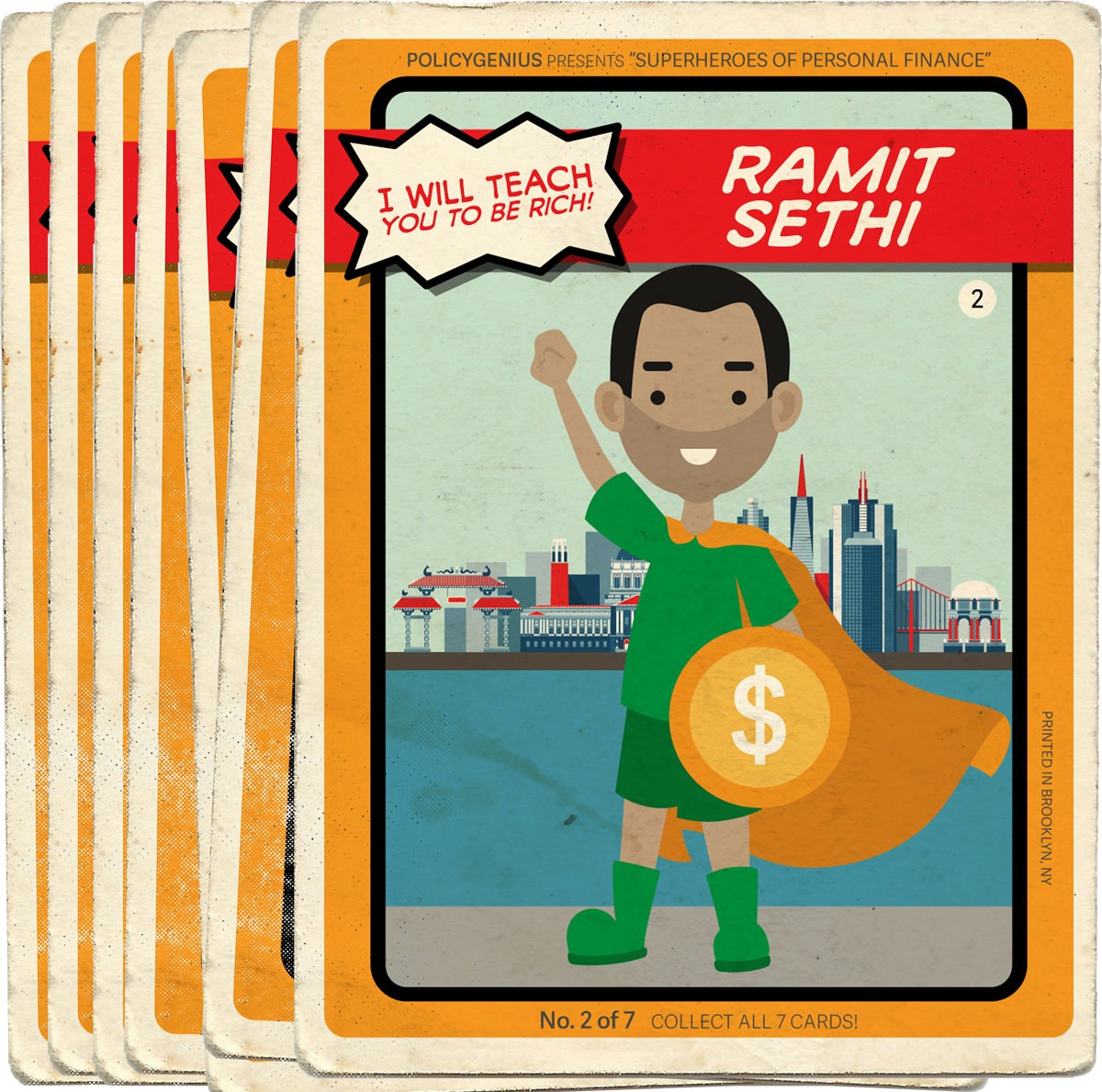 Ramit Sethi grew up in Sacramento, California. Both of his parents were Indian immigrants and he credits them for influencing his approach to money. They had a way of negotiating so they wouldn’t waste money – even from the day he was born, when they wanted to change his name from "Amit" to "Ramit" and convinced the registrar that he’d made a typo rather than pay to have the name changed.When it was time to head off to college in the early 2000s, Sethi’s middle-class family wasn’t able to afford it. That was his first real introduction to money. He set up a system to streamline his scholarship application process – Sethi loves systems and procedures to take the guesswork and tediousness out of tasks, something he uses in his personal finance lessons a lot – and applied to more than 60 scholarships, which ended up netting him more than $200,000 that he used to go to Stanford.What did he do with his first scholarship check?He invested it in the stock market and lost half of it.

Sethi decided he needed to really learn the ins and outs of money after that. He read up on a lot of personal finance topics and decided most of it was not useful. Even though he was majoring in Science, Technology & Society with a minor in Psychology (which would come in handy later) he began giving financial advice to his fellow students and eventually parlayed that into a blog.From his blog, Sethi went on to what is probably his most popular accomplishment: I Will Teach You To Be Rich, a best-selling book that, he likes to point out, shot to #1 on Amazon the day it was released and beat out the Twilight novels. It features a six-week financial course that covers everything from setting up your savings to automating your money to learning how to invest.Sethi also has a lot of courses on his blog (also named I Will Teach You To Be Rich) for people who want more than what’s available in the book. They’re pricey – ranging from $200 to $12,000 – but he doesn’t feel that people should be compelled to buy them if they can get what they need from his blog or book. In fact, he doesn’t want people with credit card debt to sign up for the classes.

Sethi puts his psychology knowledge to good use by digging into the reasons why we do the things we do with our money and how we can use tools and services to put a stop to our bad habits.

As good as it is that Sethi concentrates on big-picture financial tips, it may be intimidating to someone who has no idea where to start and has very out of control spending habits. For example, he thinks that cutting back on a coffee everyday is dumb because it’s not the real root of your money problems, and "nobody wants to cut back on lattes." But don’t some people need to be forced to budget (as much as someone can force another person to do something with their money) and start with something small – like cutting back on their lattes?

Of course, this is the whole premise of Sethi’s system of advice: don’t focus on not buying that one cup of coffee, but focus instead on having a system in place to really change how you handle your money. It’s good advice, but someone who wants an immediate change to their spending habits might not feel like this is for them.

Sethi is mostly found at his blog. He posts several times a week, so you’ll never be short of something new to read.In between blog posts, though, what you’ll want to read is I Will Teach You To Be Rich (the book, not the blog).If video is more your speed, why not give his YouTube channel a look? It’s not updated as frequently as the blog – only a few times a month – but from testimonials to tips, you’ll get a lot of the same information you can find on the blog, with the advantage of not having to read.Finally, Sethi has done interviews all across the web. A few of the best are an in-depth Fortune profile from a few years back, a Q&A; with Lifehacker, and this excellent video that’s part of the Talks at Google series.

We’ve already talked about how Sethi focuses on the principles behind good financial habits instead of getting bogged down on penny-pinching minutia. And that’s what he really rails against in all of his advice: people focusing on the details. Sethi instead stresses the importance of what he calls "big wins" – so much so that he has a manifesto dedicated to it (yet another free resource).

Minutiae-focused people try to focus on everything, rarely prioritizing. They obsess over their monthly spending as much as turning the oven light off, never understanding the futility of trying to trick human nature. They use phrases like "I just need to…" and "Yeah, I really should…" and "If I just try harder this month, I should be able to…"

To Sethi, a few dollars a day isn’t what anyone’s problem is. Putting your effort toward freelancing for an additional income stream is a better use of your time. Automating your savings so you don’t have to sit down every day to do it doesn’t just save you 5 minutes a day, it saves you an untold amount of time over months and years. With terms like "cognitive miser" in play when he talks about this theory, you can tell that his background as a psych student is definitely playing a role.

One of Sethi’s big pet peeves is when people are coddled about money. Even though he’s very popular among Millennials, he has no problem with telling them when they’re being stupid with their money. It’s why he’s so big on systems and automation: people are bad with money and it needs to be taken from their control so they don’t keep messing up.

Sethi also rails against financial institutions pretty regularly. Predatory credit cards, high-fee investment options, big banks in general – they’re all in his sights. When Sethi recommends products, they’re things that will let his audience make the most of their money, like credit cards with great rewards or index funds that cost investors less than actively-managed funds. He believes that the financial industry should offer value rather than "obscurity and miseducation and misrepresentation." You can’t really argue with that.

You can find Ramit Sethi on his blog, Twitter, and Facebook page. And, of course, make sure to check out I Will Teach You To Be Rich.