We find ourselves in an exciting year in 2016 here in America: not only do we get to pay taxes like we do every year, but it’s a presidential election year!Okay, so neither of those is particularly exciting. But they’re both important, and they’re tied together more closely than you might realize.When you filed your tax return, did you notice that box asking if you wanted $3 to go to the presidential election campaign fund? And did you skip over it?If you’re like most people, you probably did. But if you’ve ever wondered just what that meant, here’s what you need to know.

How the presidential election campaign fund got its start

A lot of people think that private funding is bad for political elections; the theory goes that it means people with money can spend more on campaigns and have more of an influence on elected officials.If campaigns are funded by the general population, politicians won’t be reliant on a small group big players and will be less beholden to them. The easiest way for the government to collect money is to use the way they already collect money: taxes. A voluntary campaign donation on the form people have to fill out anyway ensures a more equitable system.The first proposal for public funding came in 1907 from Teddy Roosevelt but never came to pass. A public funding law was passed in 1966 but was later suspended, and in 1971 public funding legislation was passed and it’s basically what we know it to be today. 1976 was the first presidential election in which public money was made available.The original amount listed on the campaign donation form was $1. In 1993 it increased to $3, and that’s where it’s stayed ever since.

If you haven’t taken the time to read the presidential campaign election fund box on your 1040 form, it goes a little something like this:"Check here if you, or your spouse if filing jointly, want $3 to go to this fund. Checking a box below will not change your tax or refund."The last sentence is important as far as taxpayers are concerned; it isn’t $3 added on top of your normal tax return. The IRS simply redirects $3 to the campaign fund, which is managed by the Federal Election Commission (FEC).

Funds are available to candidates during the primaries and general election; up until 2014 parties could use public funds at nominating conventions, but President Obama signed a law that ended that. (But it’s not all bad news; the money that used to be earmarked for nominating conventions now goes toward the Gabriella Miller Kids First Research Act, which helps fund research into pediatric cancer and disease.)During primaries, public funds are used to match private individual contributions, and at each stage the FEC has set limits on what can be spent. 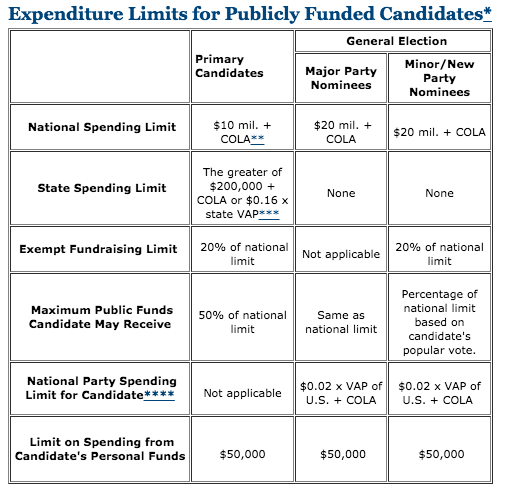 Some of the regulations around public financing limit what candidates can do with private contributions, and that’s one of the reasons public funding has lost steam over the past few years.

The shift from public funding

This seems pretty great, right? Everyone is always complaining about money corrupting politics, so a public funding option solves all our woes, doesn’t it?Well, no, because taxpayers stopped donating and politicians stopped accepting the funds.The number of taxpayers who actually check that box has cratered since the option was introduced. In 1977, 29% of taxpayers opted in. By 1992, it was down to 19%, but the increase from $1 to $3 meant that there was still a healthy amount of money coming in.By 2013, though, only 6% of taxpayers opted in.Some experts think that part of the decrease in the number of donations stems from the fact that people just don’t understand the option. Taxpayers think that it’s an additional $3 on top of what they already owe the government (or, worse, $3 taken out of their refund).It could also be that, with a complex tax system like the one the U.S. has, people don’t want to take the time on a superfluous step. They’d rather do what they need to do to complete their return and not get audited. None of this "optional step" nonsense.

People are also frustrated with politics in general. Congress ended 2015 with an 11% approval rating; that’s not directly tied to the presidential campaign fund (since that money is, obviously, for presidential campaigns and not for Congress) but it does underscore the fact that people are fed up with politicians and feel like they don’t deserve that money. Attack ads, out-of-touch policies, and a zero-compromising stance aren’t particularly endearing.But it doesn’t matter if no one’s using the money anyway.In terms of dollar amounts, the 1976 election – the first year the public fund went into effect – saw $73 million in fund payouts, the 2000 election had almost $240 million paid out, and 2012 had...$37 million.In the 2008 election, Barack Obama became the first major-party nominee to not use public funding. Of course, he didn’t need it: he raised $750 million dollars. John McCain accepted the $84 million he was entitled to as the Republican candidate; if you didn’t hear, he lost that presidential race.In 2012, neither Obama nor Mitt Romney used public funding in the general election, so there’s $288 million sitting with the government that’s not being spent. What gives?Obama showed that you don’t need public funding and all of its pesky regulations. Private donations and super PACs can do a lot of things with a lot of money. Remember the expenditure limits outlined in the FEC’s chart earlier? Those don’t apply to private funding.From the point of view of a candidate, why would you hamstring yourself with public funding when you can make more money with fewer caveats elsewhere?The issue of money in politics isn’t going away any time soon. If campaign finance reform laws make progress maybe we’ll see a return to public funding, but until then, it makes sense why both taxpayers and candidates have moved away from it.